Voted one of the top ten buildings in Texas in 2009 the Little Chapel-in-the-Woods is one of the state’s finest architectural achievements. Built-in 1939 and dedicated by First Lady Eleanor Roosevelt in that same year it has been a place of inspiration for the students, faculty, and Texans statewide ever since. Conceived by Dr. Louis Hubbard the fifth president of the college as a sanctuary to foster and support spiritual connections for the students of TWU it boasts hand made fixtures, stained-glass windows, upholsteries, mosaics, and wood worked pews all made by over 300 students under the tutelage of Associate Professor Dorothy “Toni” LaSelle. 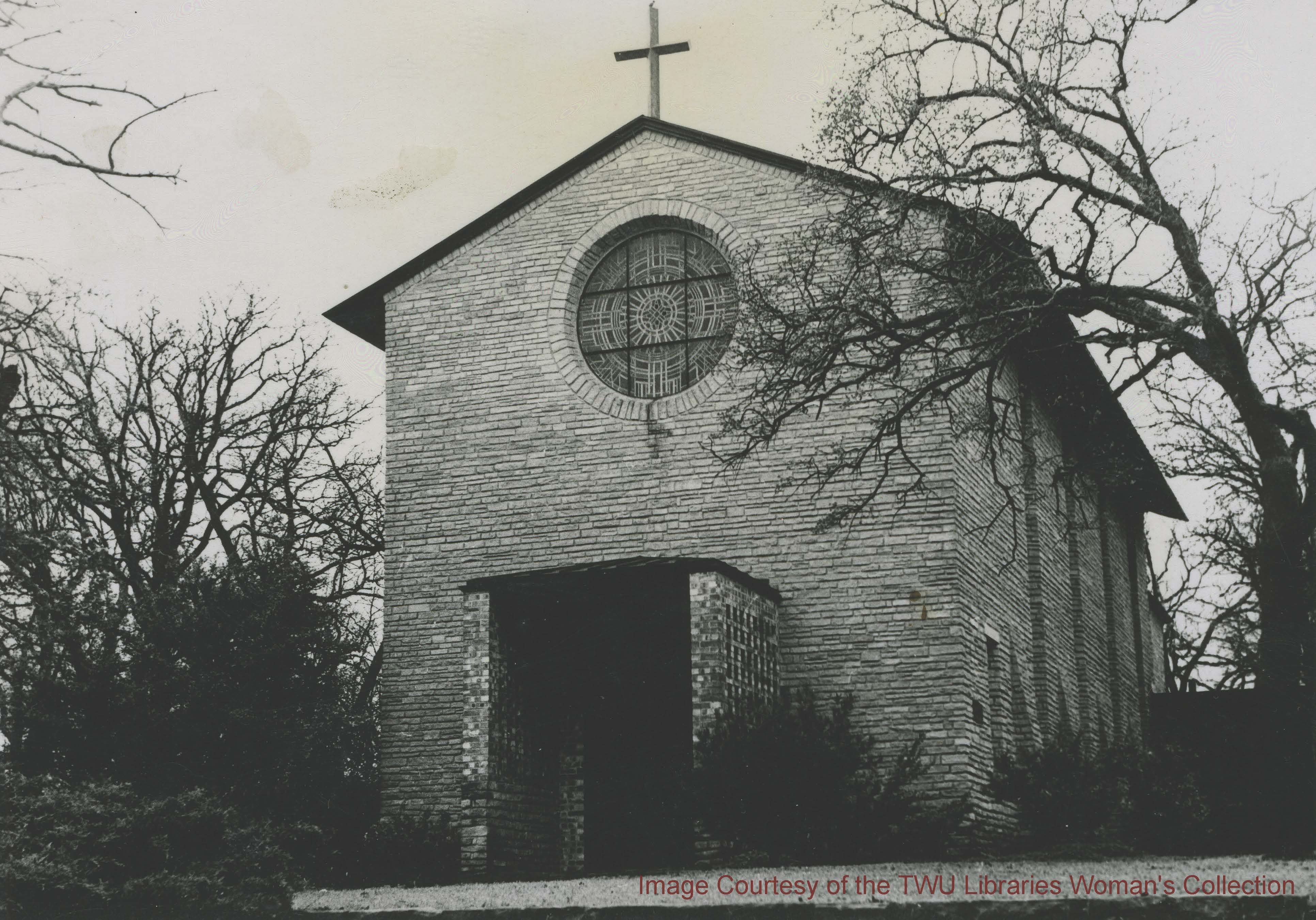 Breaking ground for the Little Chapel in January of 1939, Dr. Louis Hubbard and Professor Dorothy LaSelle on the far right. (Courtesy of TWU Woman's Collection) 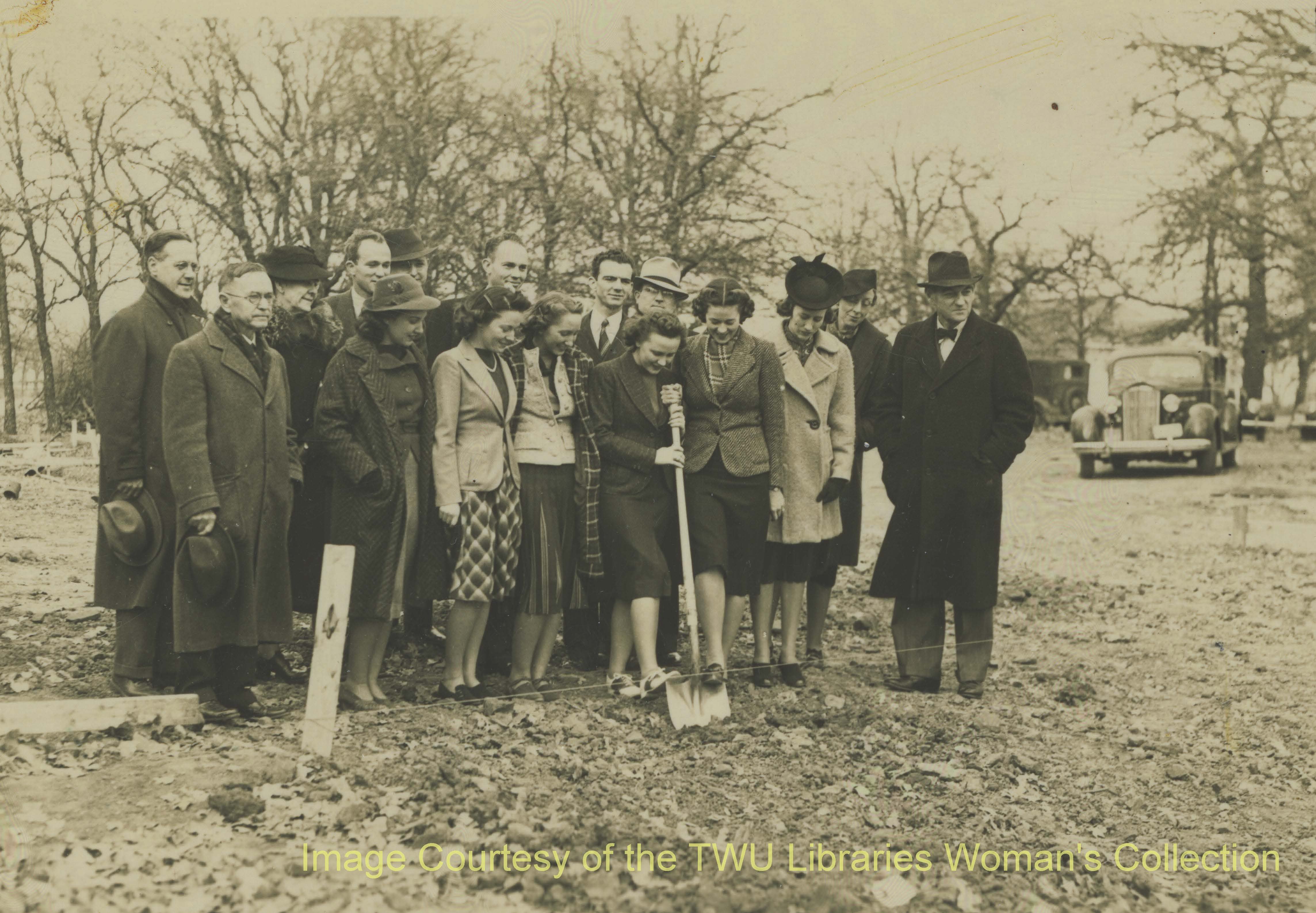 Denton workers for the National Youth Administration laying the exterior brick for the Chapel. The NYA was instrumental in mobilizing the local workers used to provide labor for the framing and construction of the Chapel. (TWU Woman's Collection) 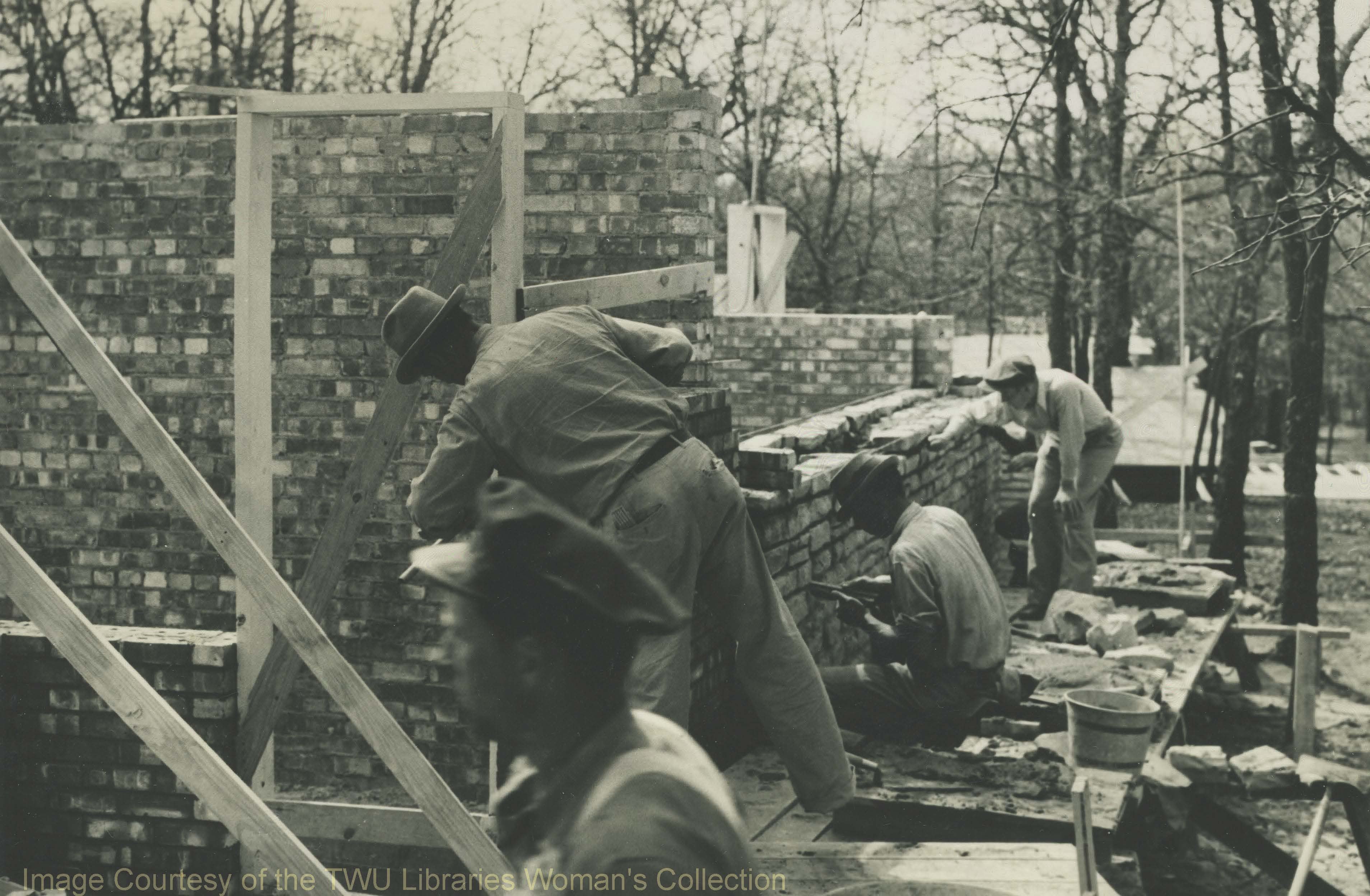 First Lady Eleanor Roosevelt at the dedication of the Little-Chapel-In-The-Woods, November 1, 1939 before the Chapel's actual completion. (Courtesy of TWU Woman's Collection) 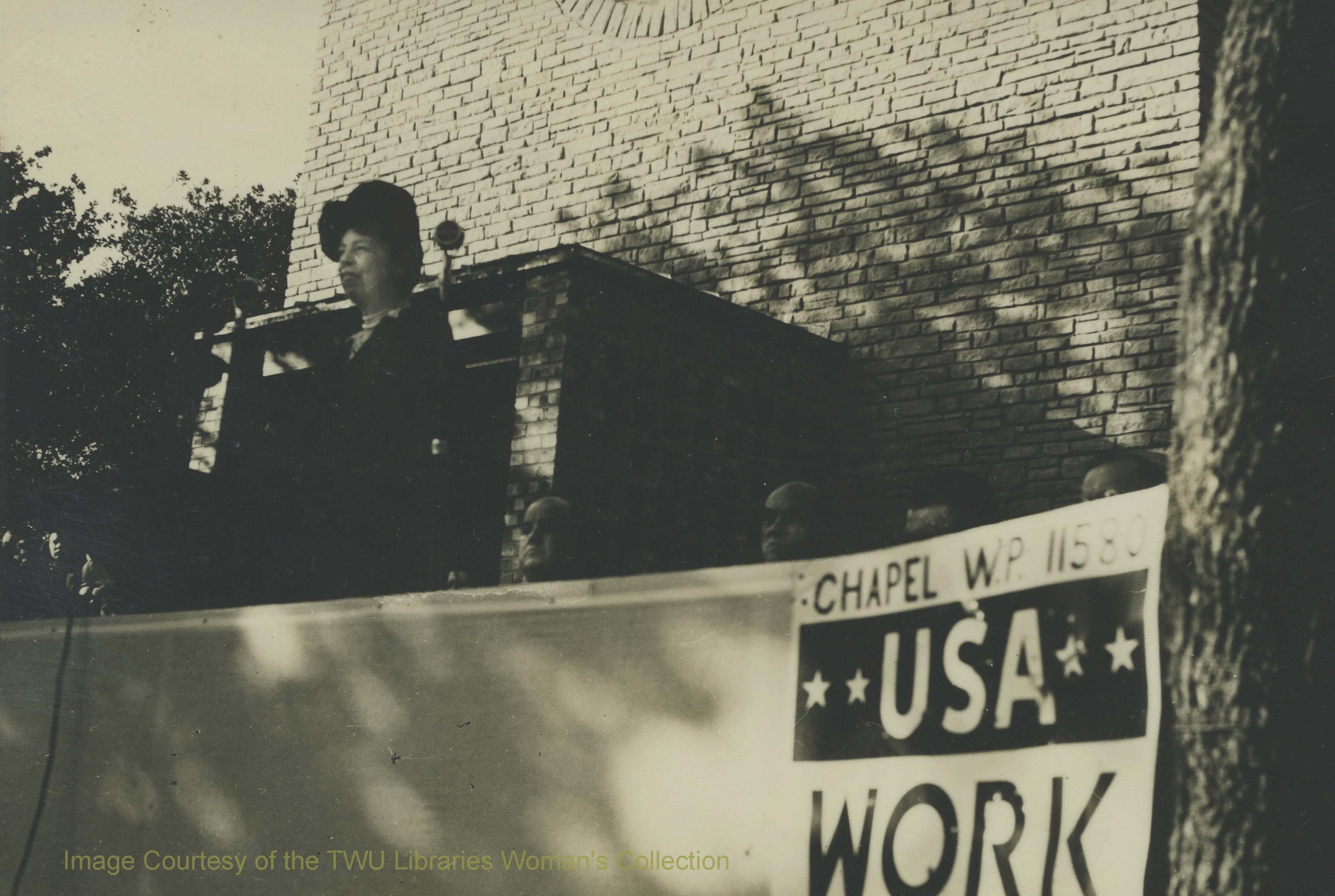 Students working on design plans for the Chapel under the supervision of Dorothy Laselle circa 1938. These students and over three hundred others were responsible for the artistic design and decoration of the Chapel. (TWU Woman's Collection) 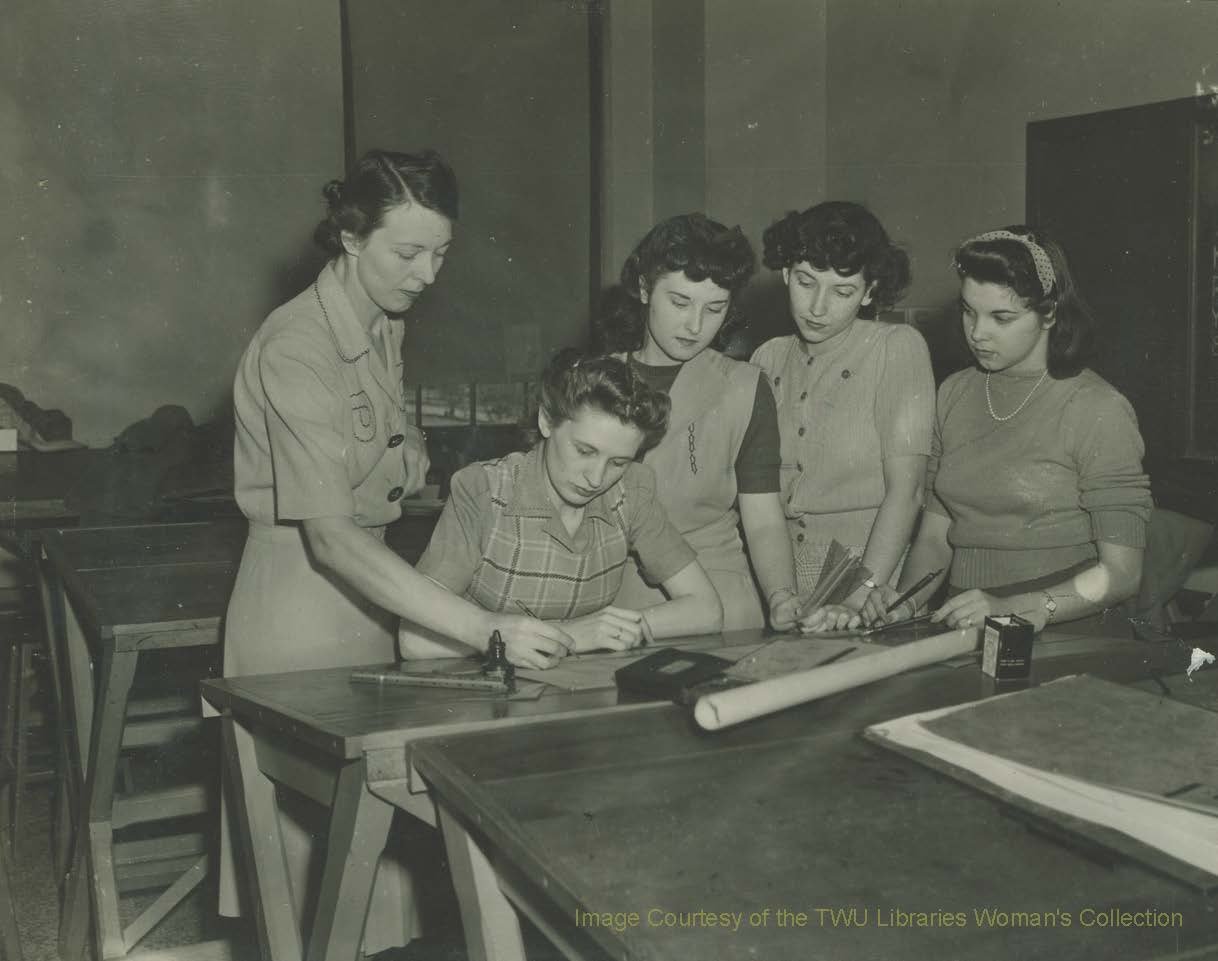 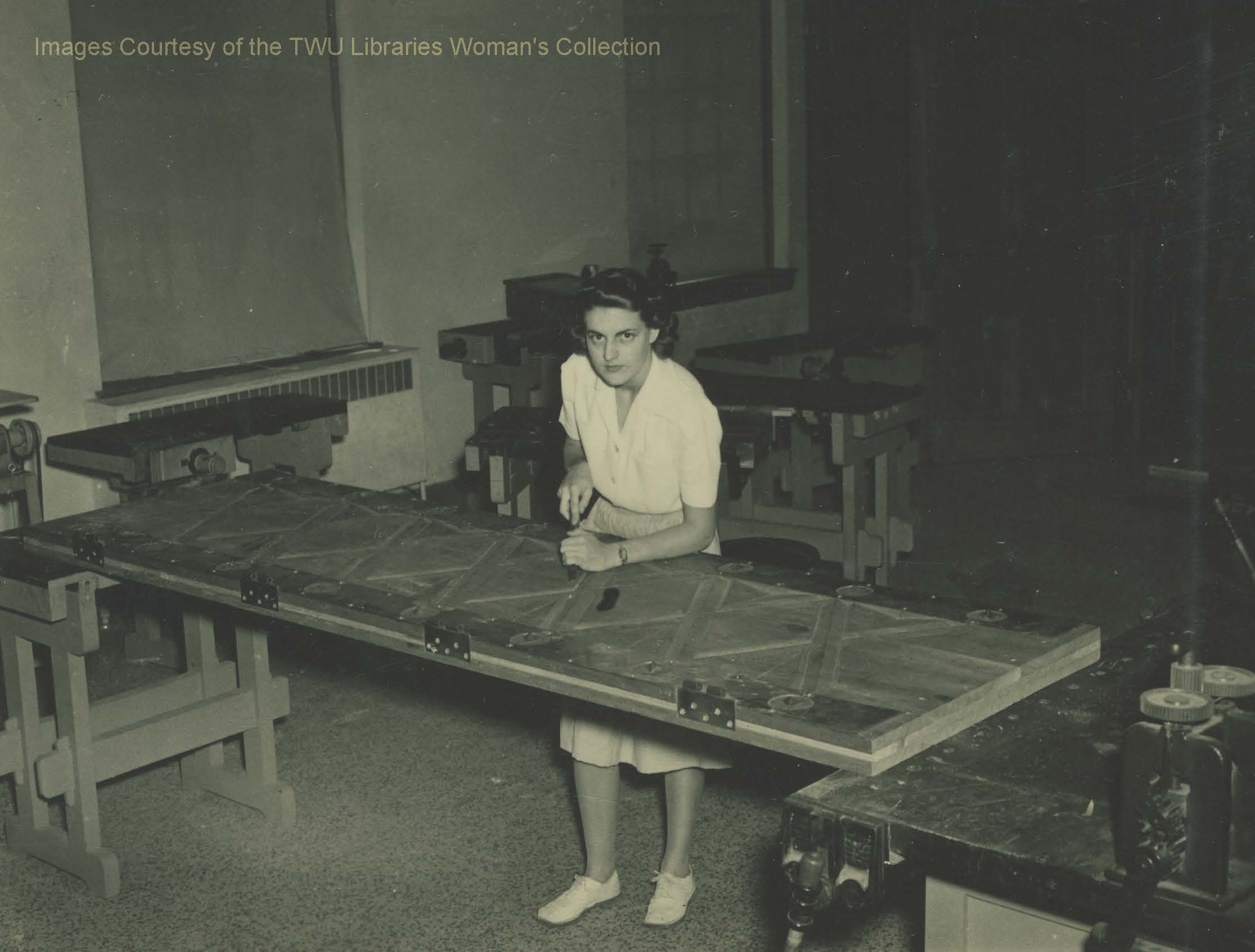 Dorothy "Toni" Laselle and Marilyn Yates in front of the Rose Window of the Little Chapel circa 1939. This window and the others were all fired, painted, and constructed on campus. (Courtesy of TWU Woman's Collection) 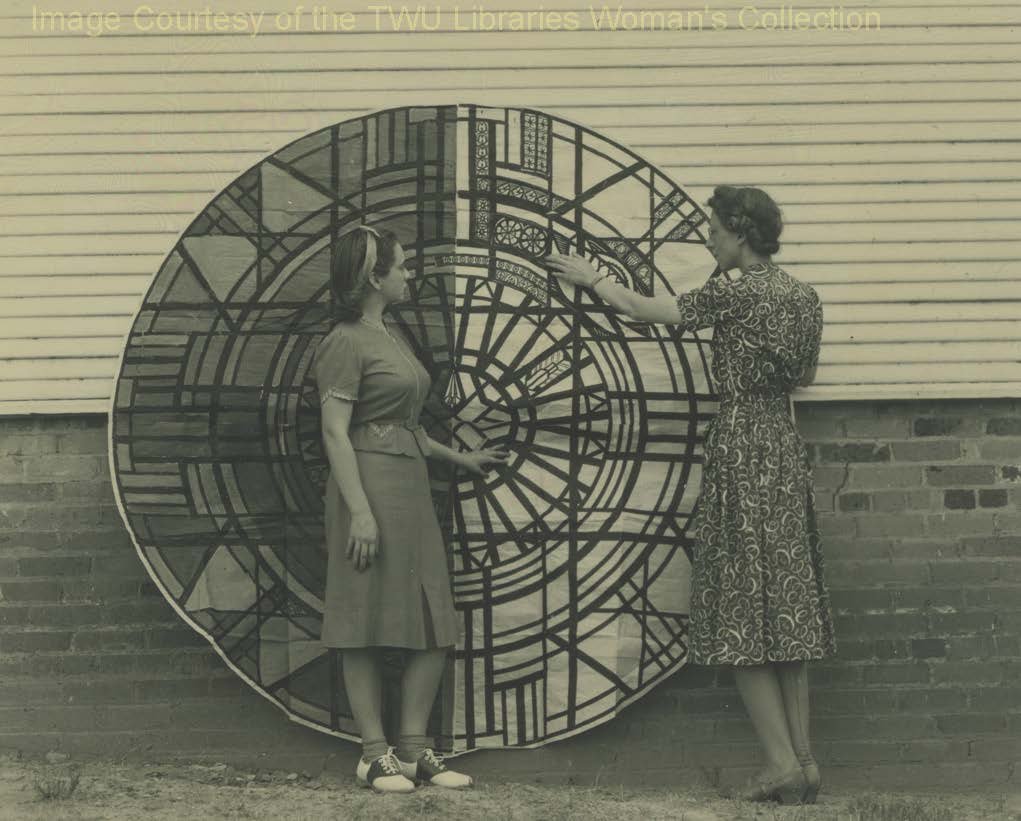 Dorothy LaSelle and students gathering the student-made light fixtures. Students working in the metal shop on campus cut and fabricated these fixtures as well as the altarpieces and metal trims within the Chapel.(Courtesy of TWU Woman's Collection) 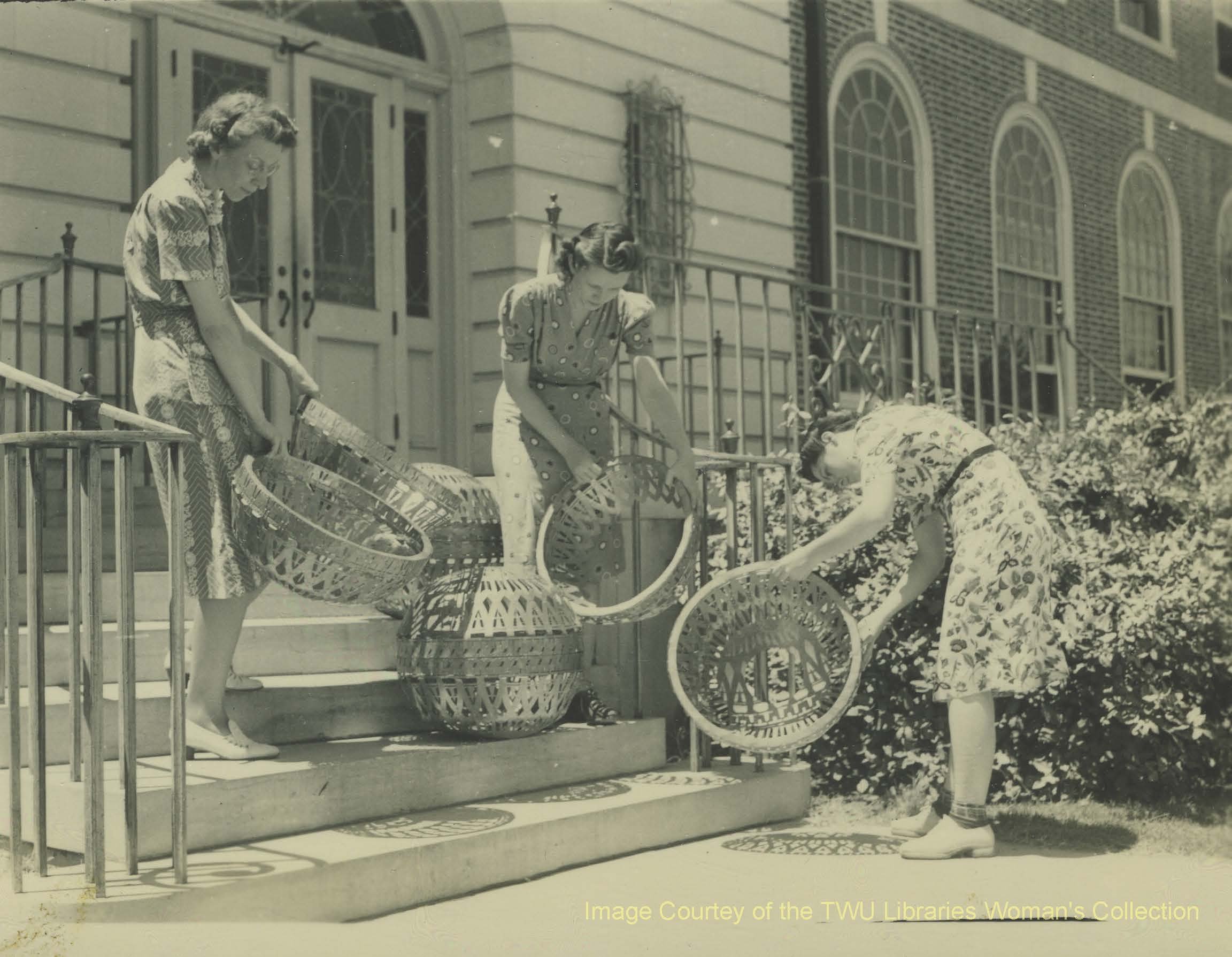 Envisioned by TWU’s fifth president Dr. Louis Hubbard as a place where students may come to get in touch with or strengthen their spirituality, The Little Chapel has been a non-denominational sanctuary on campus for meditation and prayer since its inception. Built during the Great Depression, the Little Chapel relied upon donations. Unable to secure funds directly from New Deal programs being a religious structure, the initial contribution for the project came from Mr. and Mrs. W.R. Nicholson (a former TWU graduate) who paid $15,000 towards the purchase of materials in 1938. All additional funds were furnished through the donations of students and faculty.

The National Youth Administration handled the labor for the Little Chapel. Created in 1935 during the 2nd New Deal years of the Great Depression by President Franklin D. Roosevelt, the NYA was headed by Lyndon B. Johnson during the planning of the Chapel. The plans for the 90 x 42 spiritual retreat were drawn up by local architect O’Neil Ford of the Dallas architectural firm Ford & Swank. The ground was broken on January 1st, 1938 and the Chapel was completed and furnished for roughly $28,000. First Lady Eleanor Roosevelt dedicated it on November 1st, 1939 just short of completion. Its first wedding held a few days prior in front of an impromptu altar. Upon completion, it was hailed by Dr. Hubbard as “A shining example of what youth can accomplish when it is entrusted with responsibility”1.

The exterior stone was sourced from Bridgeport Tx, and Texas Brick encloses the windows. The artwork for the Chapel was a collaborative effort by students, faculty, and artisans from across the nation, all orchestrated by TWU’s art department Dorothy “Toni” LaSelle. Before beginning the project, Toni made her way to France to study the cathedral of Chartres’s stained glass. The Chapel’s interior boasts several buttresses also reminiscent of the cathedrals Toni LaSelle visited before construction. Assisted by artisan Emil Frei out of St. Louis, Laselle supervised the advanced history of art class of 1939 in creating the panels for the little Chapel. The students completed all eight panels, the great rose window in front of the Chapel, and the triptych behind the altar.  All windows were designed thematically by students to convey the story of women’s contributions to the world.

Along the sides of the Chapel is the Nursing window, showcasing the roles of Florence Nightingale as well as Clara Barton. The Teaching window, highlighting Mt. Holyoke founder Mary Lyon and Helen Keller with teacher Ann Sullivan symbolizing “life flourishing under a teacher”3. The Science window, representing the three fields of chemistry, biology, and physics with stars symbolic of reaching still higher. The Social Service window portrays women’s roles in the improvement of humanity by highlighting the use of legislation to alleviate suffering and promoting understanding throughout society. The Speech window represents contributions to the three areas of speech being drama, communication, and the spoken word. The Literature window continues the theme by representing women poets. The last side panel is dedicated to Dance and highlights women’s expression through the arts. The Rose window in front of the Chapel continues this last theme by its “abstraction reflecting the woman’s joy in the physical world around her”3. The triptych behind the altar and largest of the windows portrays women’s role as a mother. Divided into the three panels representing “the vitality of heart, mind, and resilience of the spirit in women”3. (LaSelle and Odor, 1949)

In addition to the windows, students were also instrumental in the custom brass lighting fixtures, painted ceiling beams, rugs made specifically for the Chapel, and hand carved the beech pews inside the Chapel with the help of O’Neil Ford’s younger brother Lynn Ford1. A couple of outstanding students of mention on the project are Beatrice Paschall Stebbing, whom “initiated the stained-glass project and workshop in 1938" and began the designs for the nurse and dance windows;  and Sammy Tate Heaton who helped to design and work on the fabrication of the lamps and altarpieces including the cross and candlesticks3. In all, over 300 TWU students worked on this project. This was truly a collaborative effort, and it is reflected in the final words of first lady Eleanor Roosevelts dedication, “may the use of this Chapel-in-the-Woods be a blessing to you all”1.

Since its first ceremony the Little Chapel has served Denton and beyond as a highly sought-after wedding location. In 2014 and 2015 Denton County voted the Little Chapel as the best wedding venue. In 1983 it was voted in the top twenty of Texas proudest architectural achievements, and 2009 Texas Monthly voted it as one of the top ten best buildings in the whole state. The Little Chapel in the Woods remains not only a spiritually meditative space for students to enjoy but a crowning architectural achievement and point of pride for the Denton campus.