Rio Rico is a city located now in the United Mexican States, but was previously a city in United States, Texas. The moving of the Rio Grande river over time resulted in several areas of land becoming disputed between the two nations. Through collaborative effort the Rio Grande's present location has been made, and the land disputes settled. This city was given to Mexico under the terms of the Boundary Treaty of 1970. 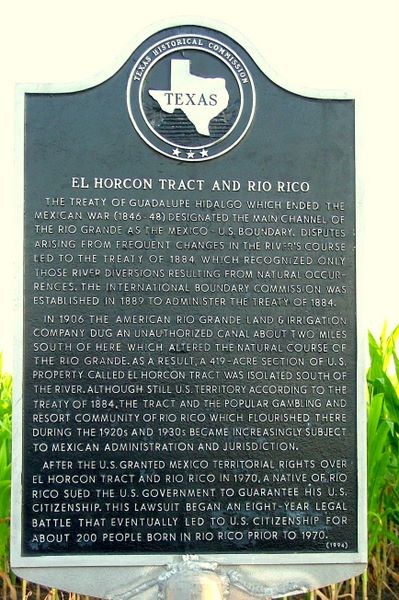 The Boundary Treaty of 1970 settled many land disputes between the United States and Mexico. The Rio Grande river which was agreed to as the border between the two countries had been shifting for decades, in effecting moving the border further south and giving more land to the United States. In addition man made efforts to alter the river were done also causing issues, as man made alterations according to international law did not lead to a change in the land holdings. These man made alterations to the river made deciding territorial claims difficult and lead to many disputes. Some areas such as the city of Rio Rico over time as a result have shifted from one nation to the other, or been temporarily claimed by both.

For several decades, diplomatic meetings were held between the two countries, one including former President Taft, and several between other noted diplomats. An international organization would be set up between the two in order organize construction with the goal of maintaining the river. Despite these efforts, a solution was not agreed to by either side for the land areas held in conflict.Eventually in 1963 the two nations would agree to the Boundary Treaty, with both giving up some land, and having further collaborative efforts in flood control to maintain the Rio Grande river at its present location. This is still maintained by the International Boundary and Water Commission

In the land successions given to Mexico from the United States was the town of Río Rico. Río Rico had previously existed in the United States, but from man made changes to the river was moved again south of the river.
The town was claimed by both countries and resulted in crime to rise as neither nation could effectively enforce laws. Following the treaty, the city was ultimately succeeded to Mexico. The transfer of Rio Rico was completed following the signing of the Boundary Treaty of 1970 by President Richard Nixon.