The church of St. Lucy was erected between 1925-1926 to serve the huge numbers of Italian immigrants who arrived in Newark beginning around the late 1880s. The building is a beautiful example of Italian renaissance and baroque architecture, and was designed by architect Neil Convery. The church interior also boasts incredible murals painted by Gonippo Raggi, who also worked on the Cathedral-Basilica of the Sacred Heart (also in Newark). The Church, which is still active, is listed on both the State and National Registers of Historic Places. It is also designated by the Roman Catholic Church as the national shrine of Saint Gerard Majella. A museum dedicated to the old First Ward is located in the church’s basement. It is full of photographs and exhibits about the earliest foundations of the neighborhood, what life was like spanning generations, innumerable family photographs, and a great deal of items such as banners and medals related to the annual feast of St. Gerard.

Murals on the ceiling, above the nave. 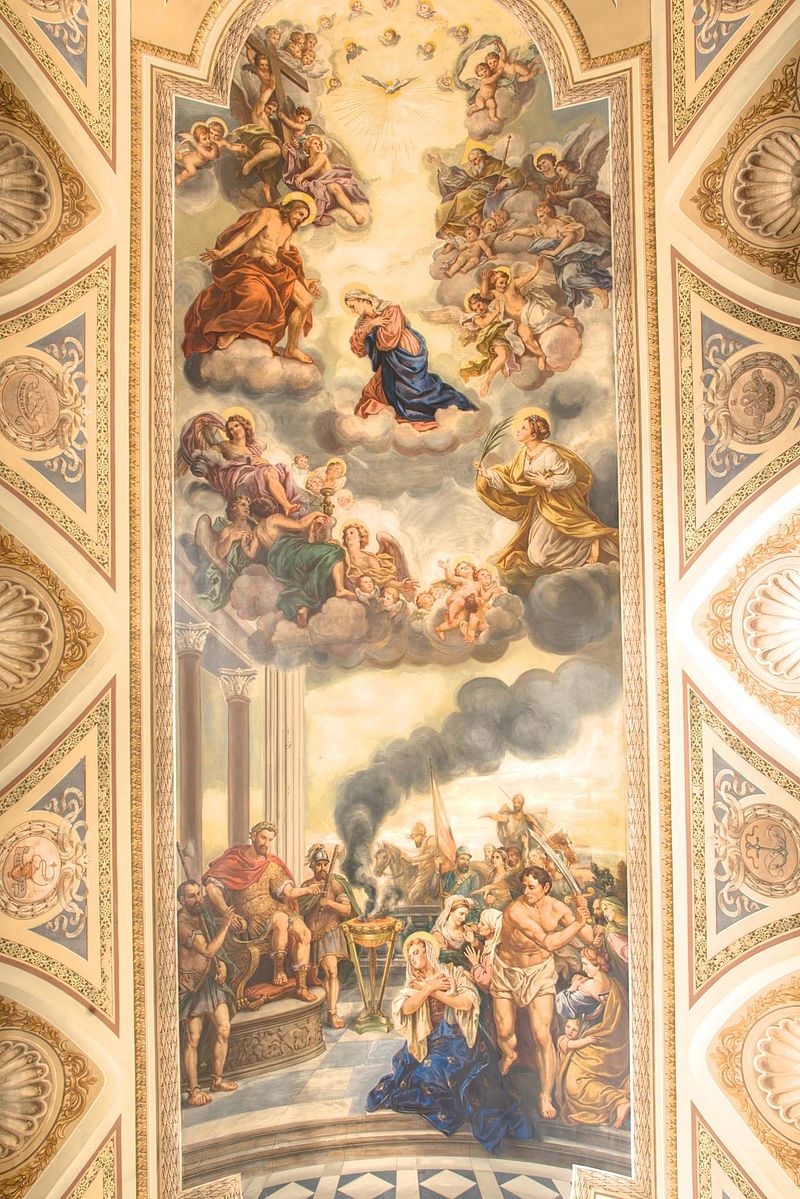 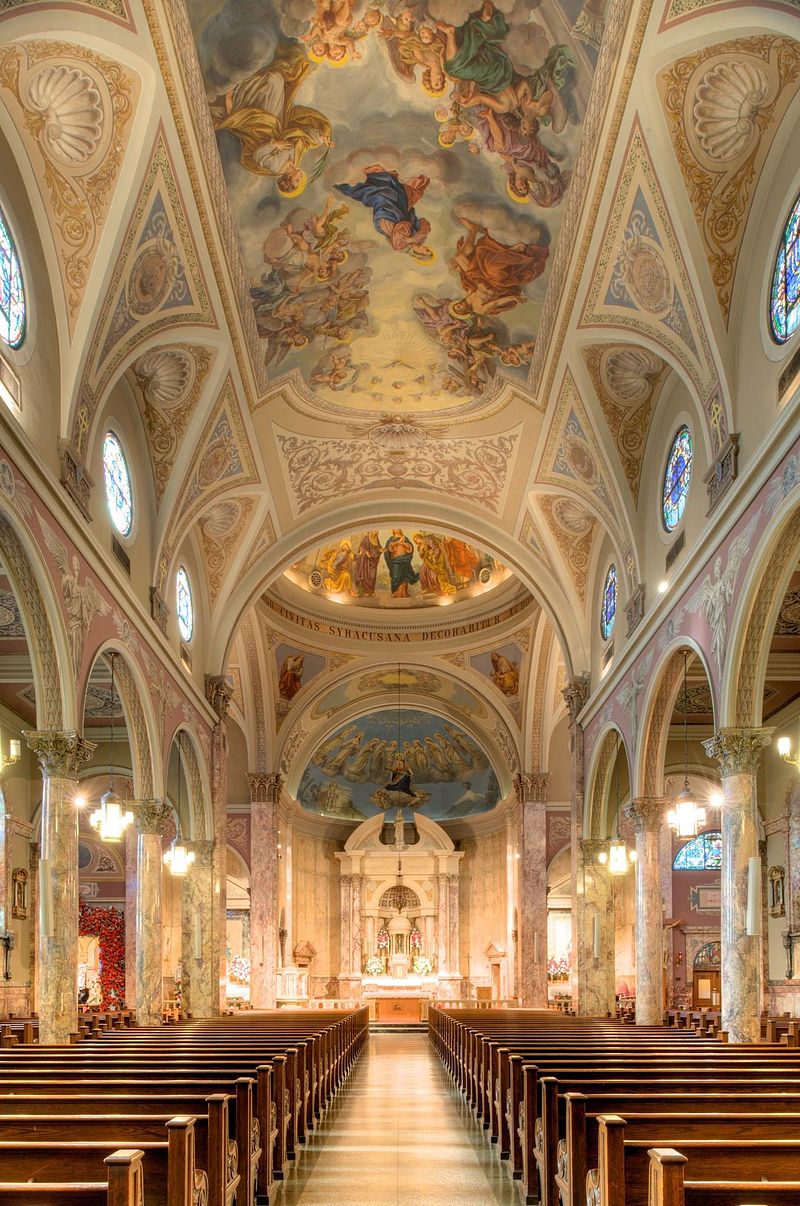 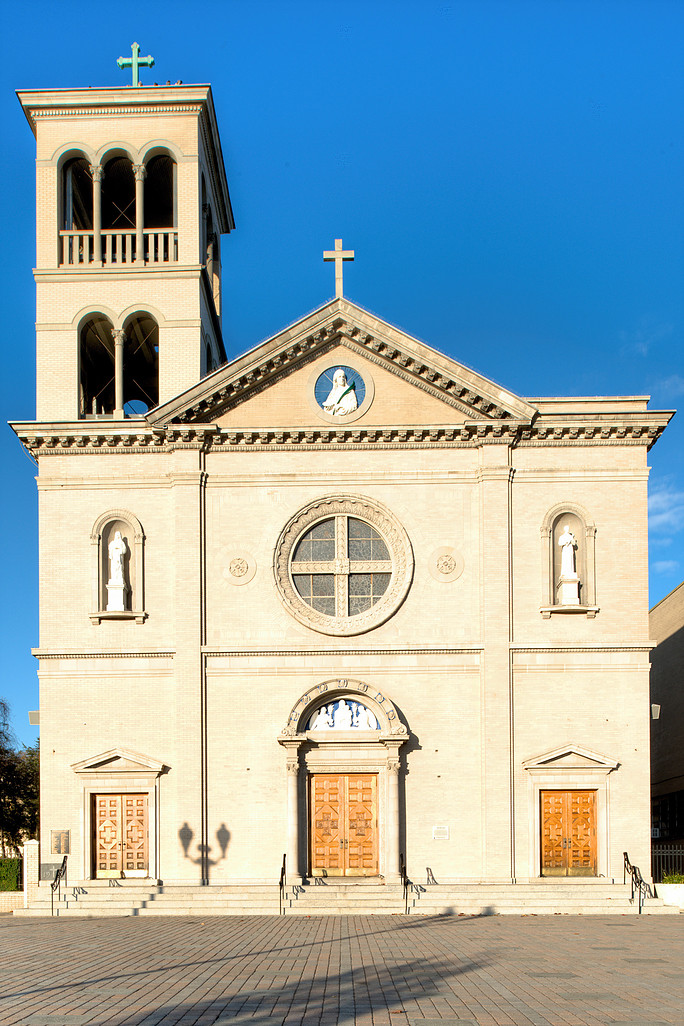 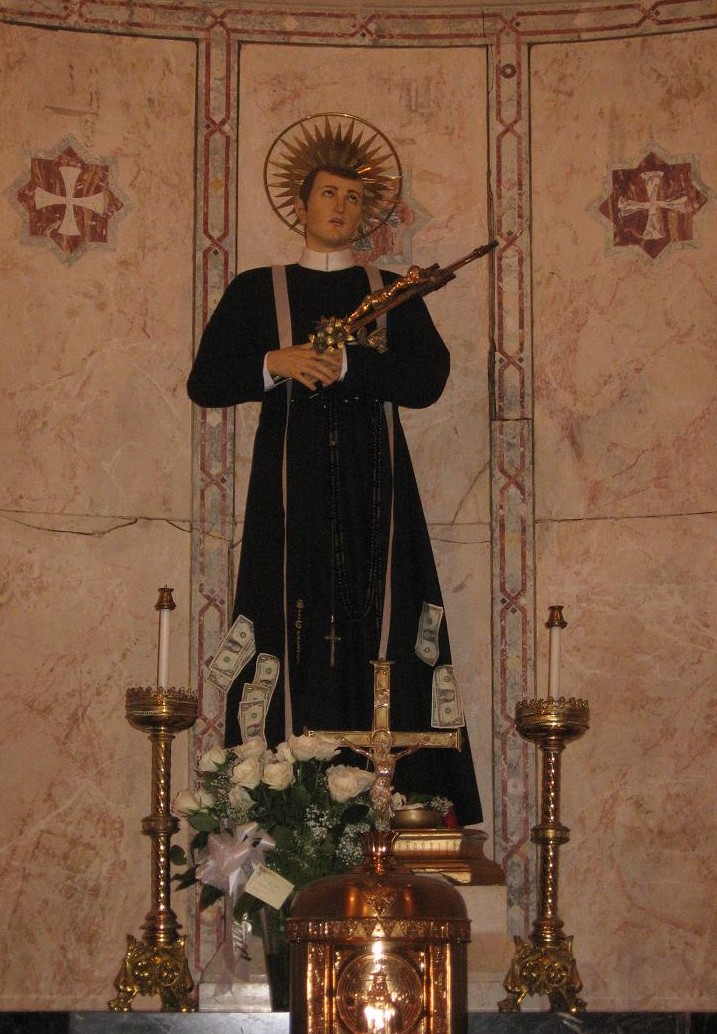 Procession with the saint, during the feast. 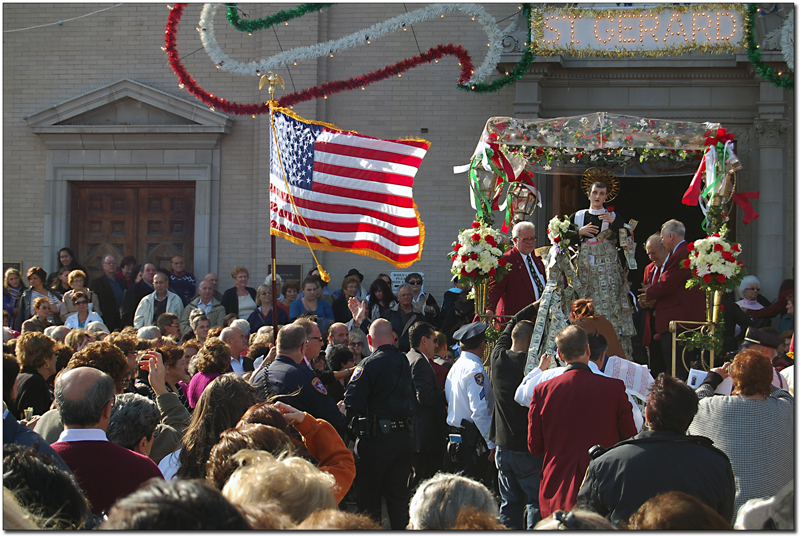 The Church of Saint Lucy is considered one of the central landmarks and a veritable nucleus of the Old First Ward, which was formerly known as Newark’s “Little Italy.” The Church is listed on both the State and National registers of historic places, and is also designated by the Roman Catholic Church as the national shrine of Saint Gerard Majella, with a feast celebrated every year with a festival and street processions with the saint’s statue.

The establishment of the church came as a result of the first waves of Italian immigrants that began arriving in the 1880s. In order to serve these new arrivals, the Archdiocese of Newark supported the founding of a number of parishes in Newark that would administer to the Italian population. The first was Our Lady of Mt. Carmel, located in Newark’s Ironbound section (and still active today like St. Lucy’s). St. Lucy’s opened shortly after, with the cornerstone being laid on December 13th, 1891, the feast day of Saint Lucy of Syracuse, for whom the church is named (Saint Lucy was an early-Christian martyr from Sicily, who was blinded and martyred during the Diocletian persecution, after refusing to give up her vow of chastity and marry a pagan in an arranged marriage. She is the patron saint of the blind).

There have been two iterations of St. Lucy’s church. The earliest structure (begun in 1891) was a wooden building, situated slightly to the side of where the current church stands. The current stone building was erected between 1925-1926. Designed by architect Neil Convery, it is an impressive structure that incorporates various architectural and artistic elements that are stylistically renaissance and baroque in character. Impressive murals are prominently displayed in the church, particularly on the ceilings above the nave, transept, and sanctuary. These were painted by Gonippo Raggi, who also participated in the decoration of the Cathedral-Basilica of the Sacred Heart (also in Newark).

The real prominence of this church has come not from its use solely as neighborhood parish, but as the National Shrine to St. Gerard Majella. A large percentage of the Italians that settled in Newark’s Old First Ward were from the province of Avellino, close to Naples. St. Gerard was also born in, and ministered to, the people of this area during his short life as a Redemptorist brother. St. Gerard’s intercession is associated with expectant mothers, healthy pregnancies, the unborn, and difficulty in conception and childbirth. A tradition that the Southern Italians brought with them from the old world is the procession of a saint’s statue through the streets on their feast day, often accompanied by the adorning of the statue with offerings. In Newark, an annual procession with the statue of St. Gerard has become perhaps the most iconic tradition of the First Ward. During his feast in October, the saint’s statue is carried from the church and processed throughout the neighboring streets. Accompanied by a band playing traditional music, the saint is carried from street to street, stopping at certain points, where large blankets made of money (and also smaller offerings made by individual faithful) are pinned directly to the statue. Besides being a visible manifestation of faithful’s belief in the intercession of St. Gerard, the money raised during the feast was (and remains) a greatly needed source of income for the church to both keep the doors open and continue the feast year after year. The combination of the annual procession and popular devotion to St. Gerard led to the designation of St. Lucy’s as the national shrine of St. Gerard in 1977.

Unfortunately, in the early 1950s, plans by Newark’s leadership for urban renewal ended up tearing the First Ward apart. At that point, Newark’s First Ward boasted a population of about 30,000, with most people living with their extended families in houses and tenements constructed around the turn of the century. In fact, this marked Newark as the American city with the fifth largest Italian population at the time. While the neighborhood was incredibly vibrant and full of shops, social clubs, and restaurants, city planners in the post-war era designated this neighborhood as a slum. City leadership proposed to convert what had been 15 small blocks into what would become 3 large-scale blocks, building high-rise towers, demolishing many homes, and displacing at least 1,500 families. Lawsuits by residents against the Newark Housing Authority had failed by 1953, and thus the way was clear for the city to begin the implementation of these plans. While St. Lucy’s church and a few other notable structures were saved from the destruction, the large scale displacement of the First Ward’s residents and many problems and tensions associated with the new high-rise housing projects forever changed the area.

However, even though the area has changed so profoundly over the past decades, the constant presence of this particular church has served as an anchor for those who have personal and ancestral ties to the First Ward, and also still continues to administer to a congregation made up of the neighborhood's current residents. Each year for the feast and procession, thousands of people descend on 7th Avenue. Some come from all over North America seeking the intercession of St. Gerard. Many are former residents of the First Ward and their descendants, who see St. Lucy’s as an integral part of their heritage and identity as Americans of Italian descent. They come, by-and-large, not only to venerate the saints, but to remember past family, friends, and personal experiences accrued over nearly a century and a quarter of history. Many of these personal memories are now enshrined in a museum dedicated to the old First Ward located in the church’s basement. It is full of photographs and exhibits about the earliest foundations of the neighborhood, what life was like spanning generations, innumerable family photographs, and a great deal of items such as banners and medals related to the annual feast. And of course, the feast of St. Gerard is still ongoing every October. For more information about the church and the annual feast, one can consult the official website of St. Lucy’s.