The Kentucky Theatre was constructed as a grand movie palace in 1922, and it impressed Lexington’s film-goers with its lavish details. Because it was one of fifty theaters in the nation equipped with Warner Bro.s’ Vitaphone sound system, the Kentucky Theatre made the transition from silents to “talkies” with relative ease. The theater then faced the Great Depression and World War II and survived. However, the theater began to struggle with the booming popularity of television in the 1950s and the rise of multiplexes in the 1970s. To stand out, the Kentucky Theatre became a repertory theater, specializing in classic and independent films. After a fire damaged the building in 1987, the city purchased the theater in 1989 and began renovations. The Kentucky reopened in 1992. 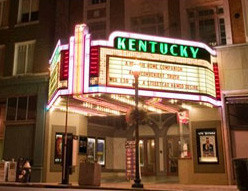 Inside the Kentucky Theatre 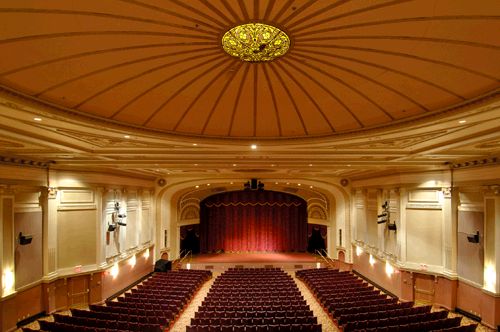 In October 1921, the Lafayette Amusement Company announced plans to build a new movie palace in Lexington. A contest was held to name the new theater, and the winner received $20 for the name “Kentucky Theatre.” The Kentucky Theatre aimed to impresses guests not with its size but with its ornate details. Touches such as marble, hand-carved woodwork, glass skylights, ornamental metal, and a Wurlitzer organ cost tens of thousands of dollars. Murals, modern plumbing and ventilation, and plush carpeting further added to the luxurious atmosphere. Inside, wide aisles and a heavy door to the projection booth would help keep guests safe in case some nitrate film caught fire, a common occurrence at the time.

The Kentucky Theatre premiered on October 4, 1922. The evening’s festivities started with an overture played on the new organ and a rendition of “My Old Kentucky Home.” Governor Edwin P. Morrow then dedicated the theater before screenings of a comic short and newsreel commenced. The Eternal Flame starring Norma Talmadge was the main feature. The theatre continued to run showings back to back from 11:00 a.m. to 11:00 p.m. every day except for Sundays. Admission was ten cents for children and around a quarter for adults. Though the marquee outside could not fit the names of the movies playing at the theater, elaborate promotions outside brought patrons in.

In 1926, the theater’s organ was replaced with a new one that included sound effects such as thunder and horses running to accommodate silent films. Unfortunately, floods in 1928 and 1932 ruined the organ. However, the theater had been on the forefront of sound films when it was outfitted with Vitaphone technology in 1927, so the transition to sound in 1928 and 1929 went smoothly for the Kentucky. The Kentucky Theatre had also been innovative when announcers in the theater kept the audience up to date on basketball and football scores in 1925 and 1926. In 1928, it screened the state basketball championship. Later that same year, the silent epic Metropolis was part of a double-bill with a play-by-play announcement of the Kentucky-Tennessee basketball game.

Though it survived the transition from silent to sound movies, the Kentucky Theatre had a hard time during the Great Depression. The price of a ticket went down, and more effort went into promotions in efforts to keep people coming to the movies. In 1933, one of the theater’s original owners, Michael Switow, took over ownership from Paramount. The theater was refurbished later that year. When it was sold to the Schine Corporation in 1936, the Kentucky Theatre remained the premiere movie theater in town, still showing only first-run, “Class A” films.

More changes came to the Kentucky Theatre in the following decades. In 1958, the theater was renovated, and air-conditioning was installed, making it one of the first public buildings in town equipped with the feature. Then, in the 1960s, the theater finally desegregated. Unfortunately, hard times were hitting movies theaters in Lexington and across the country. With the rise of television’s popularity and more people moving to the suburbs, many theaters were forced to close due to lack of business. In the 1970s, under the management of Fred Mills, the Kentucky kept itself afloat by showing pornographic films. In the latter part of the decade and the early 1980s, the theater then began showing a range of films, from the classics and art-house flicks to midnight showings of The Rocky Horror Picture Show.

In 1987, the theater was set on fire. The arsonist who lit the blaze was arrested, but the damage was done. Two years later, the Lexington-Fayette Urban County Council bought the Kentucky Theater. Renovations began in 1990. To raise money for the project, brass nameplates on seats were sold for $200. Those who donated were treated to tickets to the grand reopening in April 1992. Actress Debbie Reynolds was invited for an interview and to introduce the movie Guys and Dolls. The film was chosen because city leaders planning the event believed Reynolds was in it; she was not. Mills noticed the mistake and set up a showing of Singin’ in the Rain, in which Reynolds does appear, for later that same weekend.