In March of 1935, Governor Pat M. Neff proposed “a monument to pioneer mothers to be fashioned out of Texas granite, by Texas hands, and tower above every other Texas monument.”[11] After the first monument selection ended in controversy, a model by Leo Friedlander, a New York artist was selected. In 1938, Friedlander constructed a lone figure made of solid Georgia marble, standing at 15-feet tall. At the base of the monument, is an inscription created by TWU Associate Dean, Jessie Humphries. This inscription characterize the significance of this monument, that stands as a symbol for a University that has been a pioneer in women’s education. The monument has called Texas Woman’s University home for the last 80 years, she is known as the Pioneer Woman.

Harris & Ewing, photographer. Joint Congressional Committee appointed to inquire into the nature and extent of proper participation of the federal government. 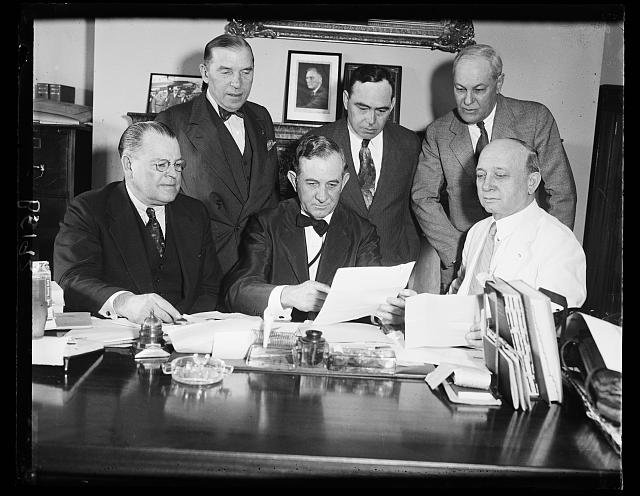 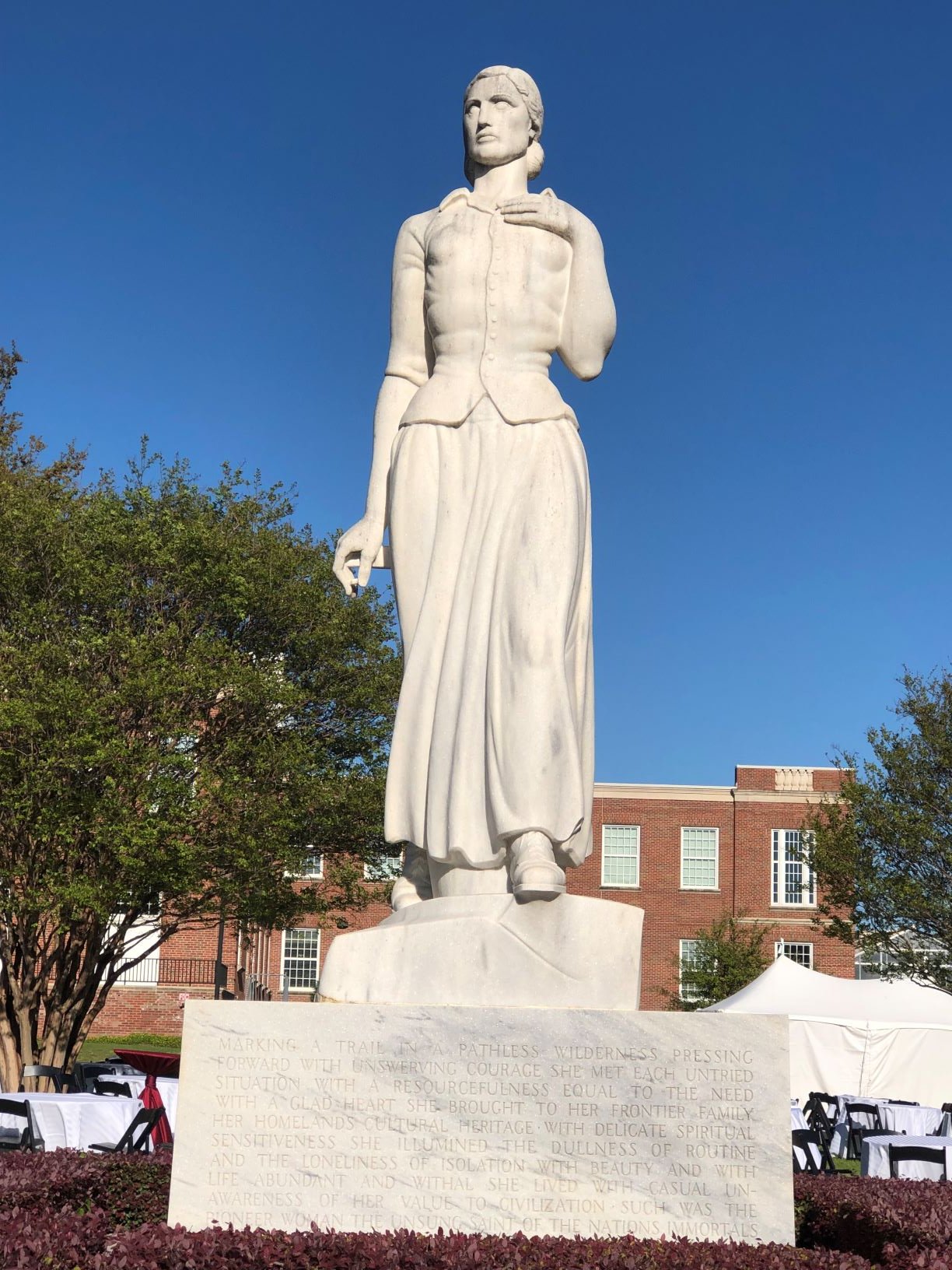 The inscription at the base of the monument written by Jessie H. Humphries. 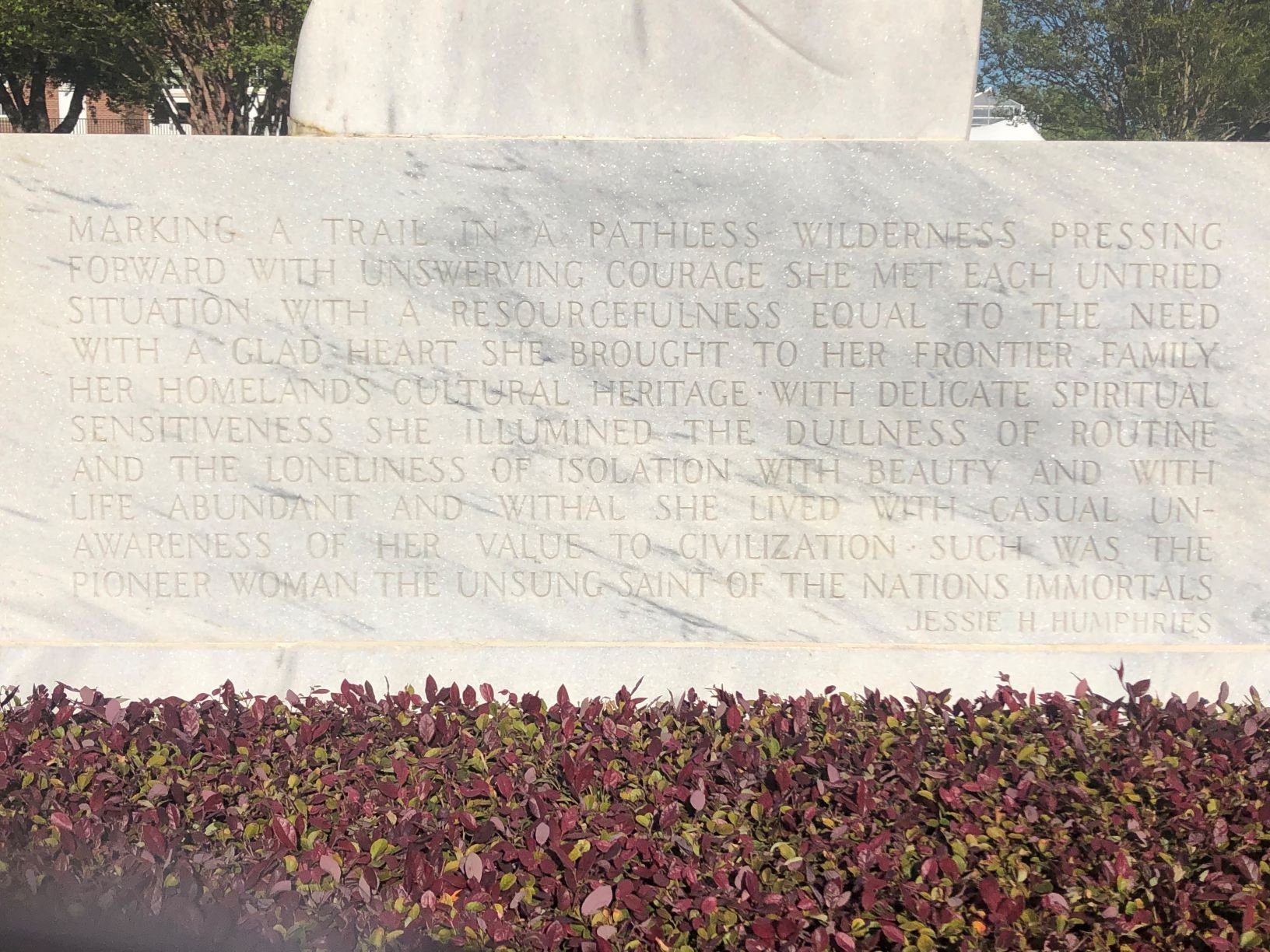 On May 7, 1935 James V. Allred, the Governor of Texas, signed House Bill 11 as passed by the 44th Texas Legislature.[1] This bill appropriated three million dollars to the Texas Centennial Celebration and created The Texas Commission of Control for Texas Centennial Celebrations (also known as the Texas Centennial Commission). This commission consisted of nine members: The Lieutenant Governor, Speaker of the House, three individuals who were to be appointed by the Governor, two individuals to be appointed by the Lieutenant Governor and Speaker of the House.[2] Their duties included supervising the appropriation distribution, administering local celebrations, and erecting historical markers, monuments, and memorials.[2]

With the combined six million dollars, Texas placed numerous buildings, memorial museums, statues, monuments, granite and bronze markers around Texas.[4] One of those statues was the Pioneer Woman located on the campus of Texas Woman’s University. In 1936, the Texas Centennial Commission opened the “Memorial to the Pioneer Woman” competition.[5]  A selection committee appointed by the Centennial Commission consisted of seven art professionals that selected William Zorach's model [6] depicting a pioneer woman, her husband, and two children. However, this sculpture selection caused protests from Texans across the state because the family depicted in the sculpture were all nude. The Daughters of the Republic of Texas called it “the greatest insult that could be offered to these women who believed and practiced the virtue of modesty.”[5] The backlash and outrage led to the State Board of Control stepping in and ordering the selection of a new sculpture.

In 1937, the commission selected a new artist, Leo Friedlander based out of New York. Friedlander submitted a model of a lone woman dressed in a long, flowing gown, jacket and bonnet with only her feet bare. This was a drastic change from the Zorach sculpture. After many suggested changes, the result was the statue that is presently standing. Friedlander was required to work with a state approved architect to construct the base of the statue. David Nelson, an architect from Dallas, was selected to work with Friedlander. Nelson's original blueprint that consisted of a reflection pool and walkways was rejected by the Board of Regents due to cost.[7] The alternative, a large base made from Georgia marble, was constructed by the Llano Marble Company of Dallas, Texas.

Three years after the Governor’s proposal for this monument, about 3,500 people attended the statue’s unveiling on December 6, 1938.[8] Pat. M. Neff, the President of Baylor University at the time, was the main speaker at the statue unveiling. Other individuals who received invitations to the event were Governor James V. Allred, governor-elect W. Lee O’Daniel, and members of the United States Texas Centennial Commission, including Vice President John N. Garner, Secretary of State Cordell Hull, Secretary of Interior Daniel C. Roper, and Secretary of Agriculture Henry A. Wallace.

One of the most significant features is the inscription on the base, written by the Dean of Women, Jessie H. Humphries. President Hubbard selected Humphries to write the inscription “because of her extraordinary good taste in everything that she writes.” Additionally, he selected Humphries because he saw Humphries “as a modern pioneer in the field of education.”[9] The inscription reads: “Marking a trail in a pathless wilderness pressing forward with unswerving courage she met each untried situation with a resourcefulness equal to the need. With a glad heart she brought to her frontier family her homelands cultural heritage. With delicate spiritual sensitiveness she illuminated the dullness of routine and the loneliness of isolation with beauty and with life abundant and with all she lived with casual unawareness of her value to civilization. Such was the pioneer woman. The unsung saint of the nations immortals.”

The Pioneer Woman statue is the only centennial landmark with an inscription that is publicly attributed to a female author. All other texts for markers were written by the Advisory Board of Historians. The words of Dean Humphries garnered so much attention that even First Lady Eleanor Roosevelt wrote about the inscription in the daily column “My Day”. In her August 13, 1942 column, Eleanor Roosevelt wrote “There we have the secret which should be driven home to every woman. In countless homes in this country today, there are women who are "casually unaware" of the great accomplishments which are theirs. They will be recognized by history, but today we forget them because they do their daily tasks so casually that their heroism and the vital place which they fill in our world passes almost unnoticed, and certainly unsung in the present.”[9]The Pioneer Woman was erected to honor the historical achievements of women, and First Lady Roosevelt “hoped the Centennial statue would remind modern Texans of the unnoticed and unsung contributions women make to society every day.”[10]