The Mary Evelyn Blagg-Huey Library was dedicated on March 7, 1986. Named for the University’s first female president, the library is a landmark feature of the Texas Woman’s University campus. The three-story building echoes a sense of tradition through its Georgian style and Classical motifs. Built to succeed the aging and over-crowded Bralley Memorial Library, the Blagg-Huey Library allowed for the expansion of research materials and special collections. The TWU Woman’s Collection houses the largest depository of research material on women in the South and Southwest and houses the archives for the Women Airforce Service Pilots (WASP) of World War II. With its enduring commitment to the support of students, the Blagg-Huey Library is a symbol of the University’s dedication to higher learning and the recognition of women.

Students looking at a Daedalian yearbook in front of the west side of Bralley Memorial Library. Bralley opened in 1927 and was demolished in 1996. (Photo:1950s, Courtesy TWU Woman's Collection) 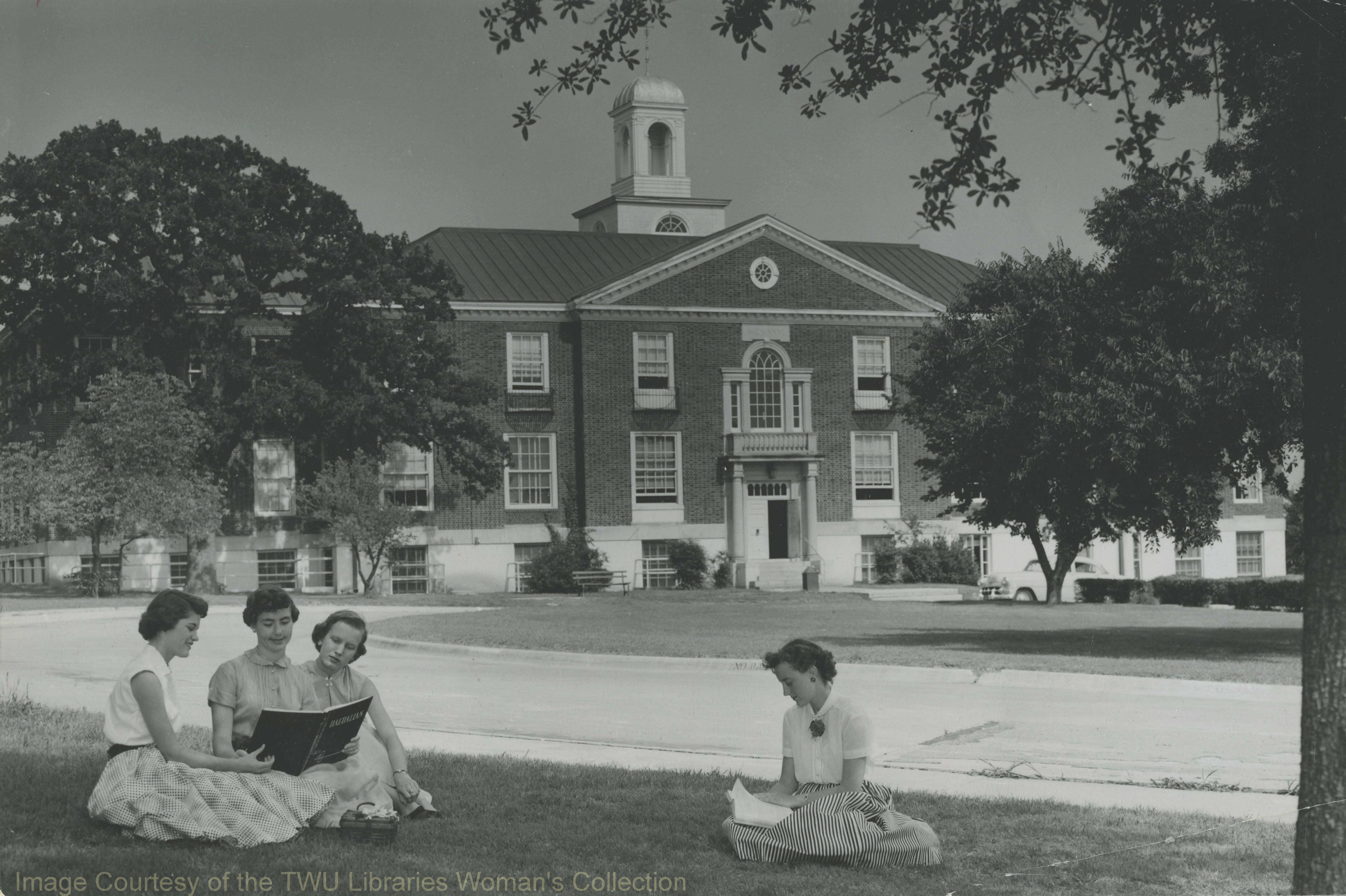 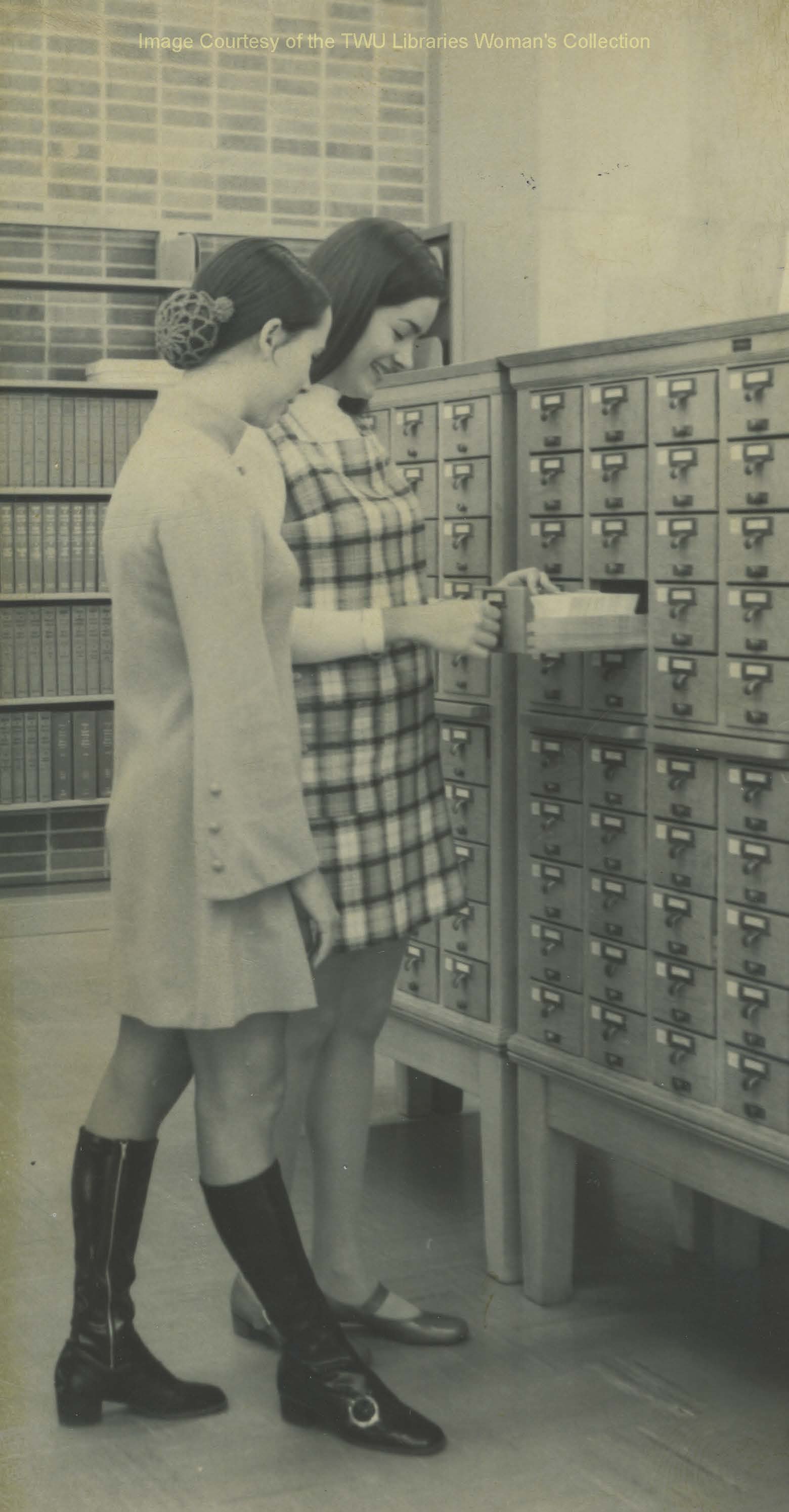 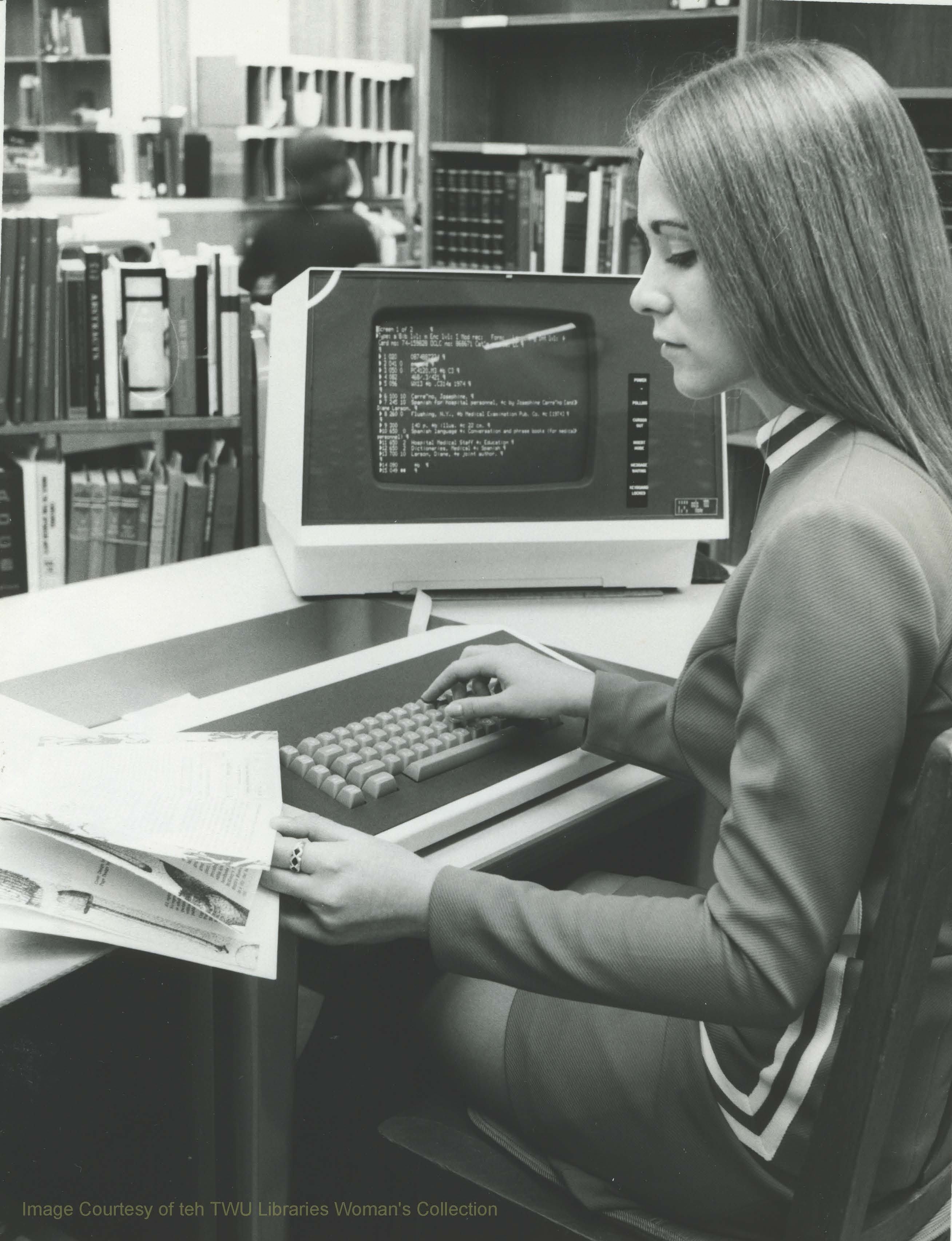 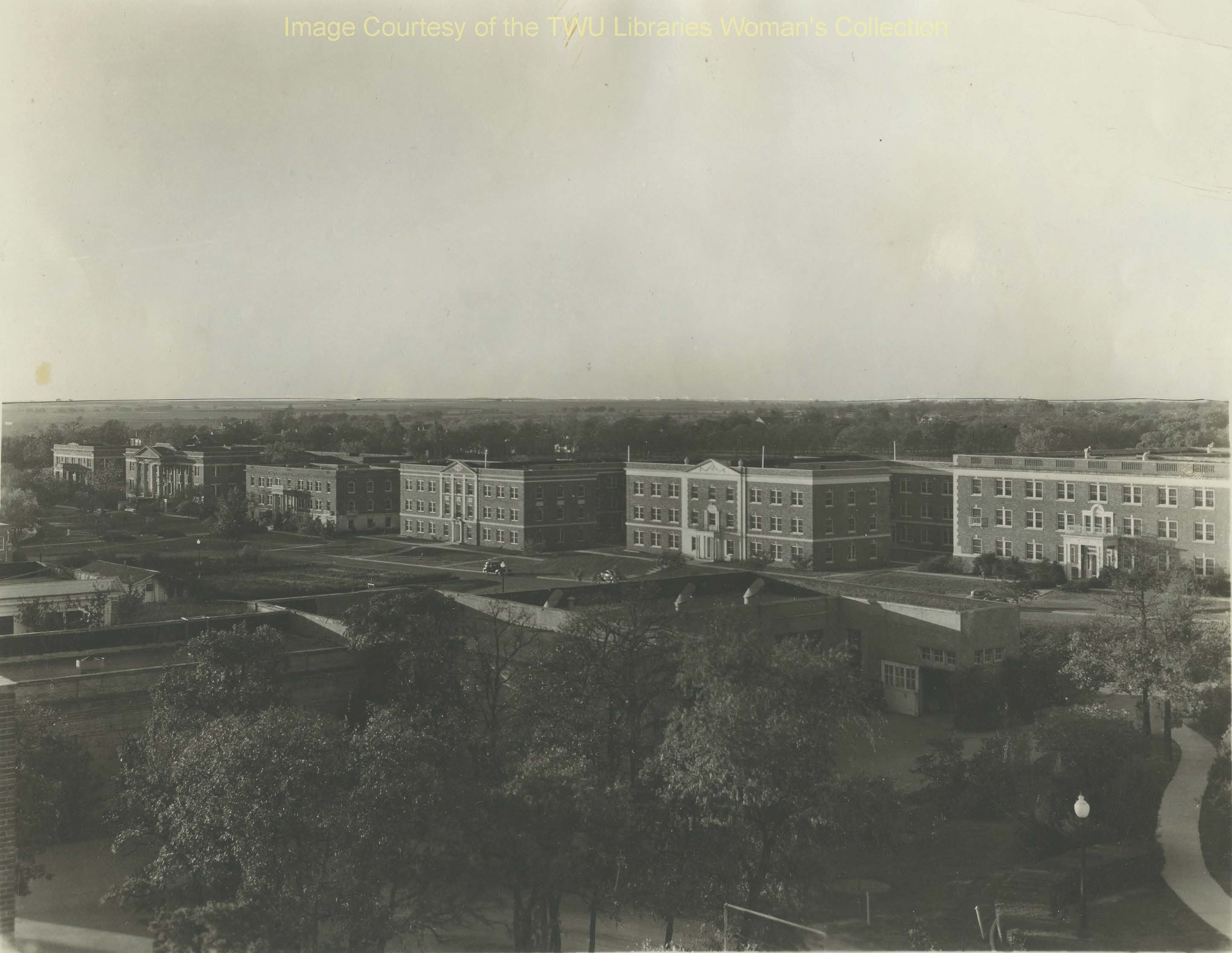 Margaret Estes Davis, Chair of the TWU Board of Regents; Dr. Evelyn Huey, seventh President of TWU (center); and Betty Carpenter, Vice Chair of the Board stand with a model of the Blagg-Huey Library. (Photo: 1980s Courtesy TWU Woman's Collection) 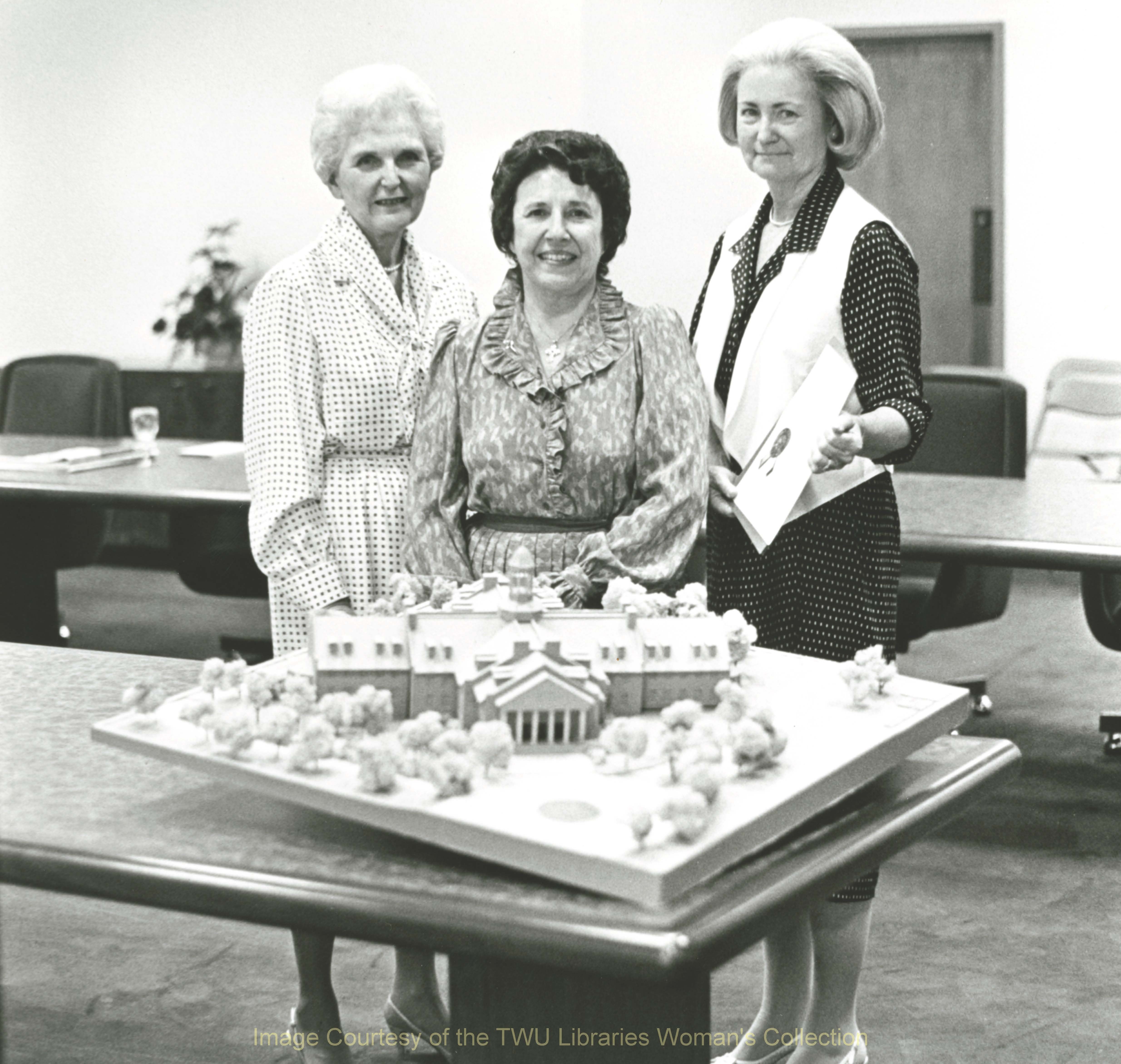 Birdseye view of Blagg-Huey Library nearing the end of construction, southwest side. Construction and architecture of the library were picked up by Dallas-based Hendrick’s and Walls Architects, Inc. (Photo: 1986, Courtesy TWU Woman's Collection) 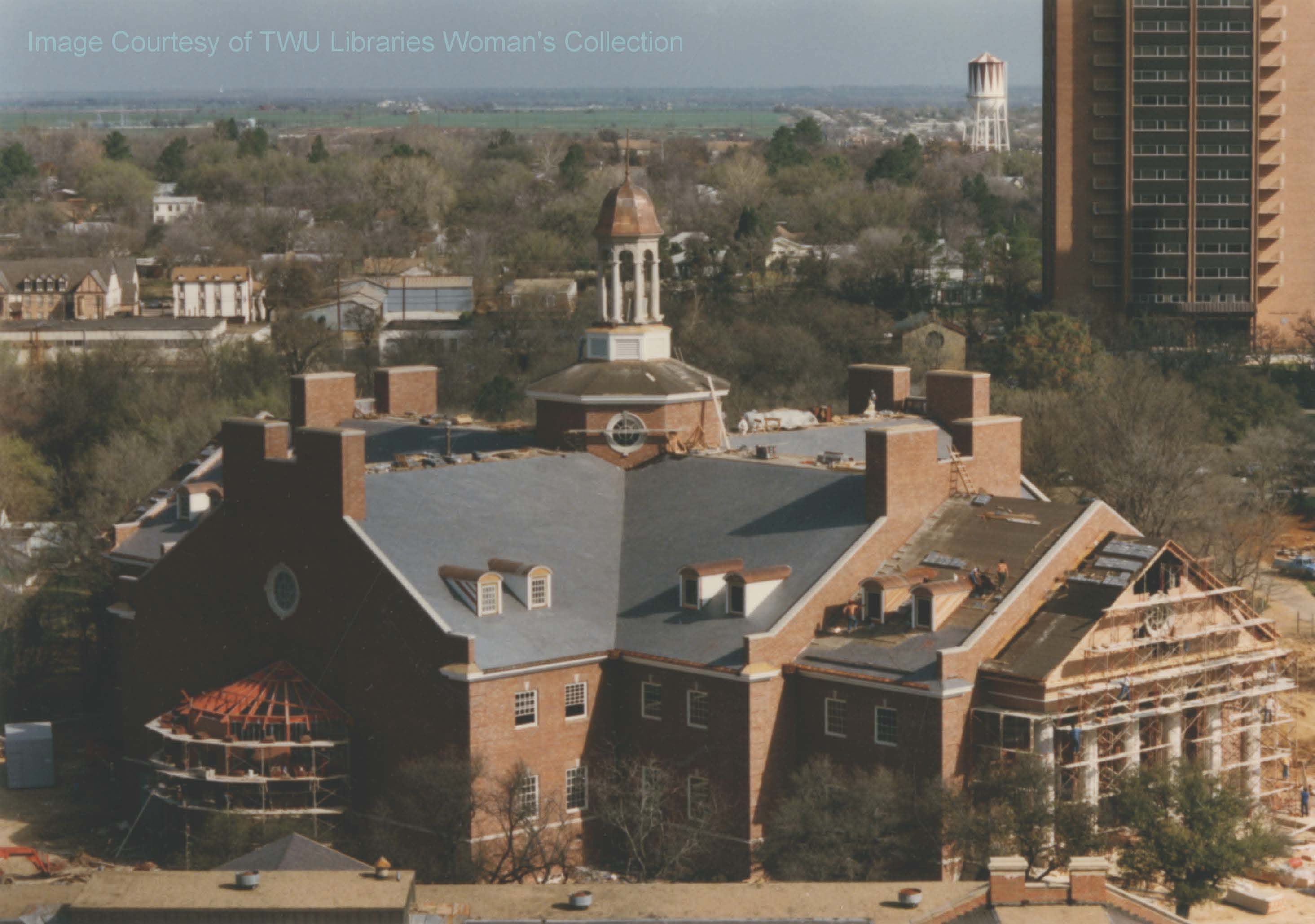 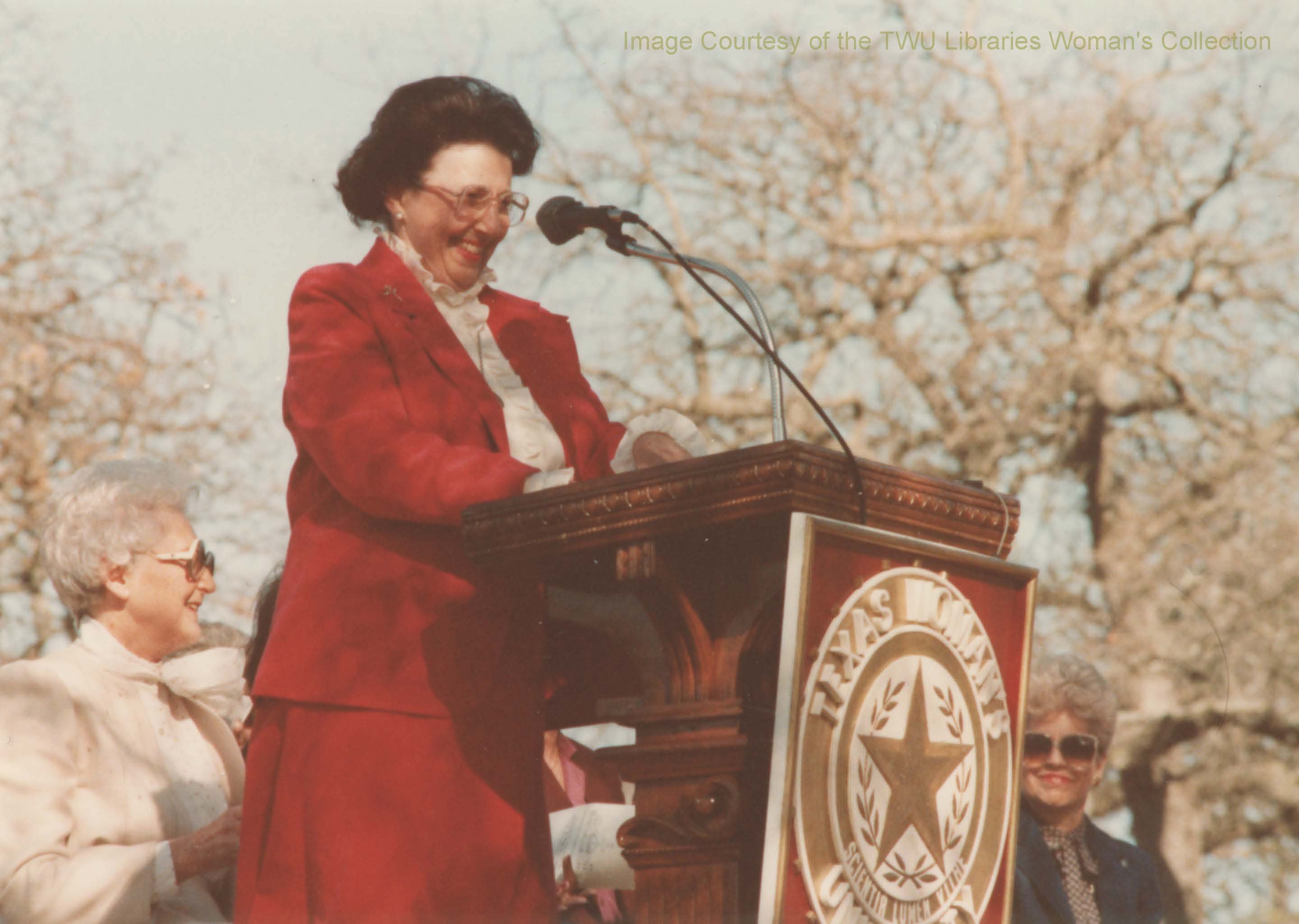 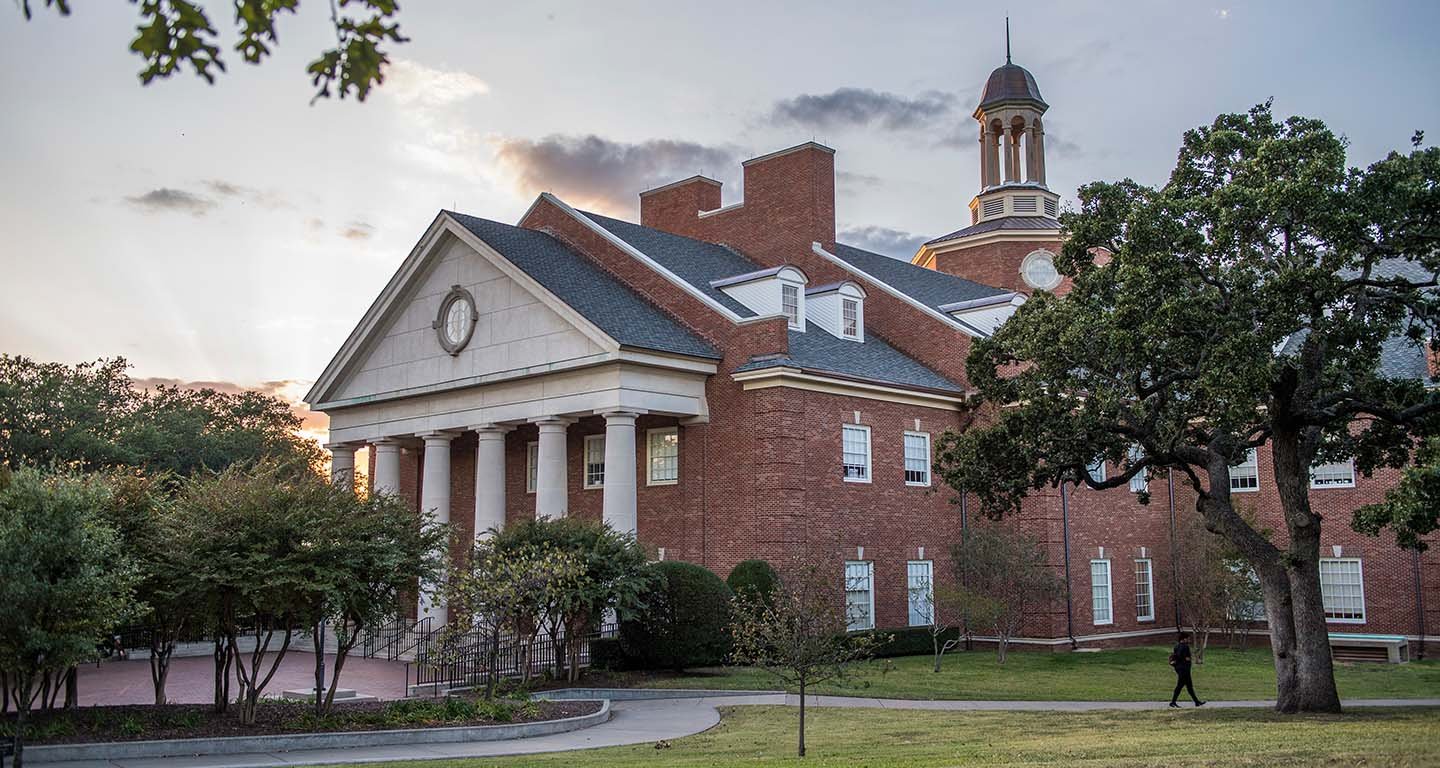 Texas Woman’s University’s library began as one room with a mere 460 books on the second floor of the Old Main Building in 1901. It was often neglected and underfinanced. The collection grew with the college and soon reached the limits of its allotted space. Although President Bralley pushed for a proper library building during his administration, legislation was not approved until 1925 under President Hubbard. Named for the former president, the Bralley Memorial Library opened in 1927 with a collection of approximately 24,000 volumes.

The student body continued to grow, and with the institution of graduate study in 1930, the need for research materials increased. The library, once again, faced overcrowding. Bralley Memorial was remodeled and modernized in 1960 with a newly added wing that doubled the library’s storage capacity. However, this would only be a temporary solution. Bralley soon developed structural problems and the need for a new library building became urgent. A plan for a new building was put forth with the ten-year master plan for TWU unveiled in Fall 1978. The new library would become a high priority for Dr. Mary Evelyn Blagg-Huey and her administration.

Funded by an $8 million special appropriation from the Texas Legislature, construction on the new library began in 1984. Clearing land on campus for the library led to the demolition of Dormitory Row, the complex of residence halls built along Oakland Avenue. Although the dorms were home to students for almost forty years, they did not meet building codes and were no longer needed for housing. Little Chapel-in-the-Woods architect, O’Neil Ford, prepared the schematic design for the new library but the architecture and construction were picked up by Dallas-based Hendrick’s and Walls Architects, Inc. The architects wanted the new building to fit with the historic buildings on campus and echo a sense of tradition.

The exterior of the three-story, Georgian-style building is red masonry with a white Roman portico entrance, slate roof, and topped with a copper cupola. Inside, a grand white rotunda spans all three floors with the TWU seal on the floor of its base. The dome of the rotunda is embellished with nine brilliant stained-glass windows. Each unique piece portrays Classical goddesses and muses as well as native flowers to Texas, Greece, and Italy. The windows fit with the Classical motif of the library and represent TWU’s dedication to higher learning and the advancement and recognition of women.

Today, the Blagg-Huey Library houses more than a half a million books, 10,000 audiovisual materials, more than 700,000 volumes of microform, and more than 6,000 serial subscriptions. The library’s Woman’s Collection is the largest depository of research material on women in the South and Southwest. Special collections include the Julie Benell Cookbook and Menu Collection and exhibits from the Texas Foundation for Women’s Resources. The library is also home to the archives for the Women Airforce Service Pilots (WASP) and the material depository for the Whirly-Girl helicopter organization. The Blagg-Huey Library serves as a landmark of the TWU campus not only for its architectural beauty but for its dedication to the development and education of its students and its commitment to the preservation of women’s history.