The Fine Arts Building was completed in 1936 as part of a campus construction project during the Great Depression. Dr. Louis Hubbard, the president of the University at the time, used federal funding through the Public Works Administration to construct the Fine Arts Building. One of the first new buildings to be added to the original campus, it houses one of the premier art programs in the state of Texas. The wings on either side of the building provide galleries to showcase local and national art exhibits, as well as displaying student artwork. Renovated in the early 1980s the upgraded Fine Arts Building provides a modern space for art students at Texas Woman's University. 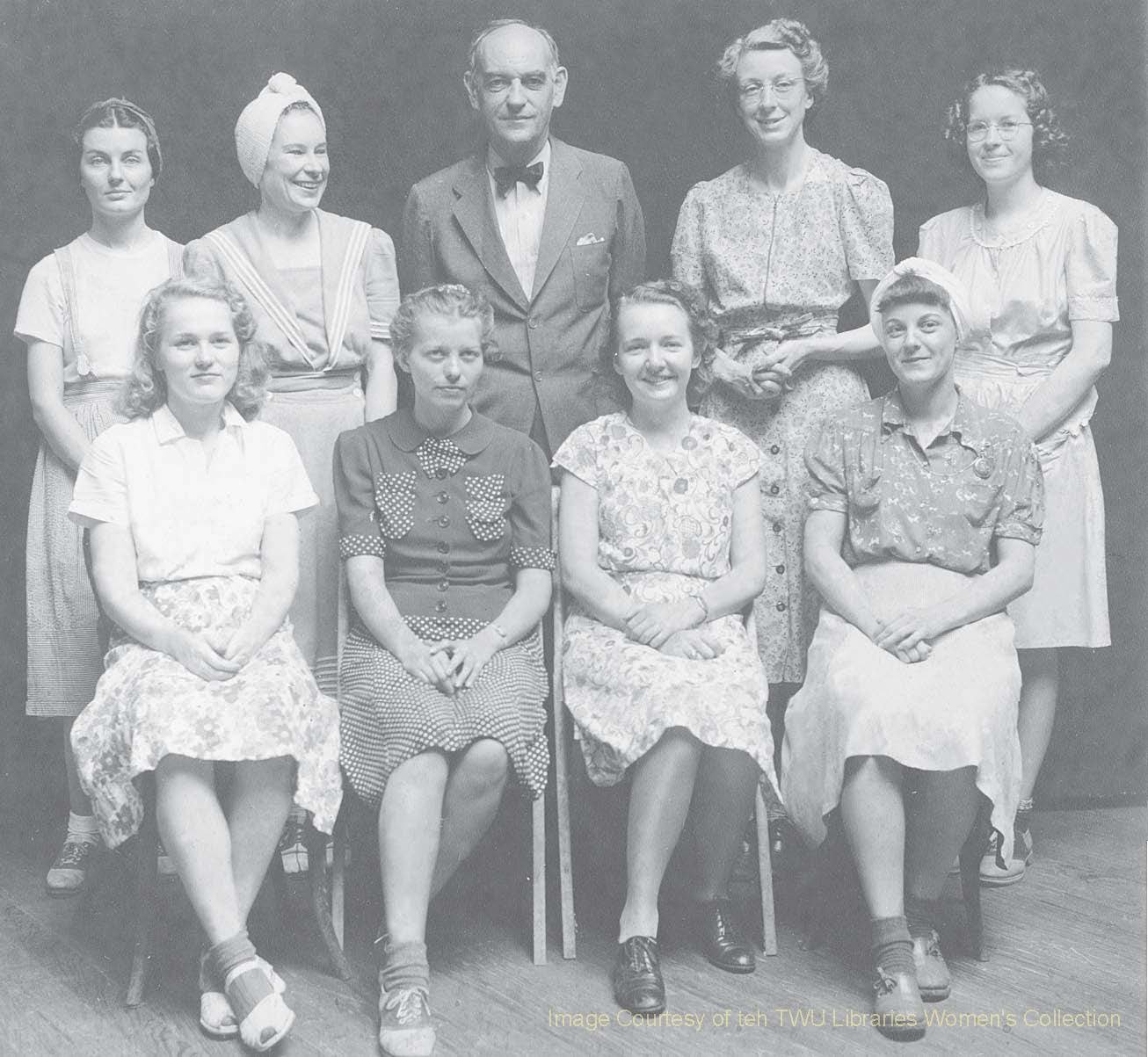 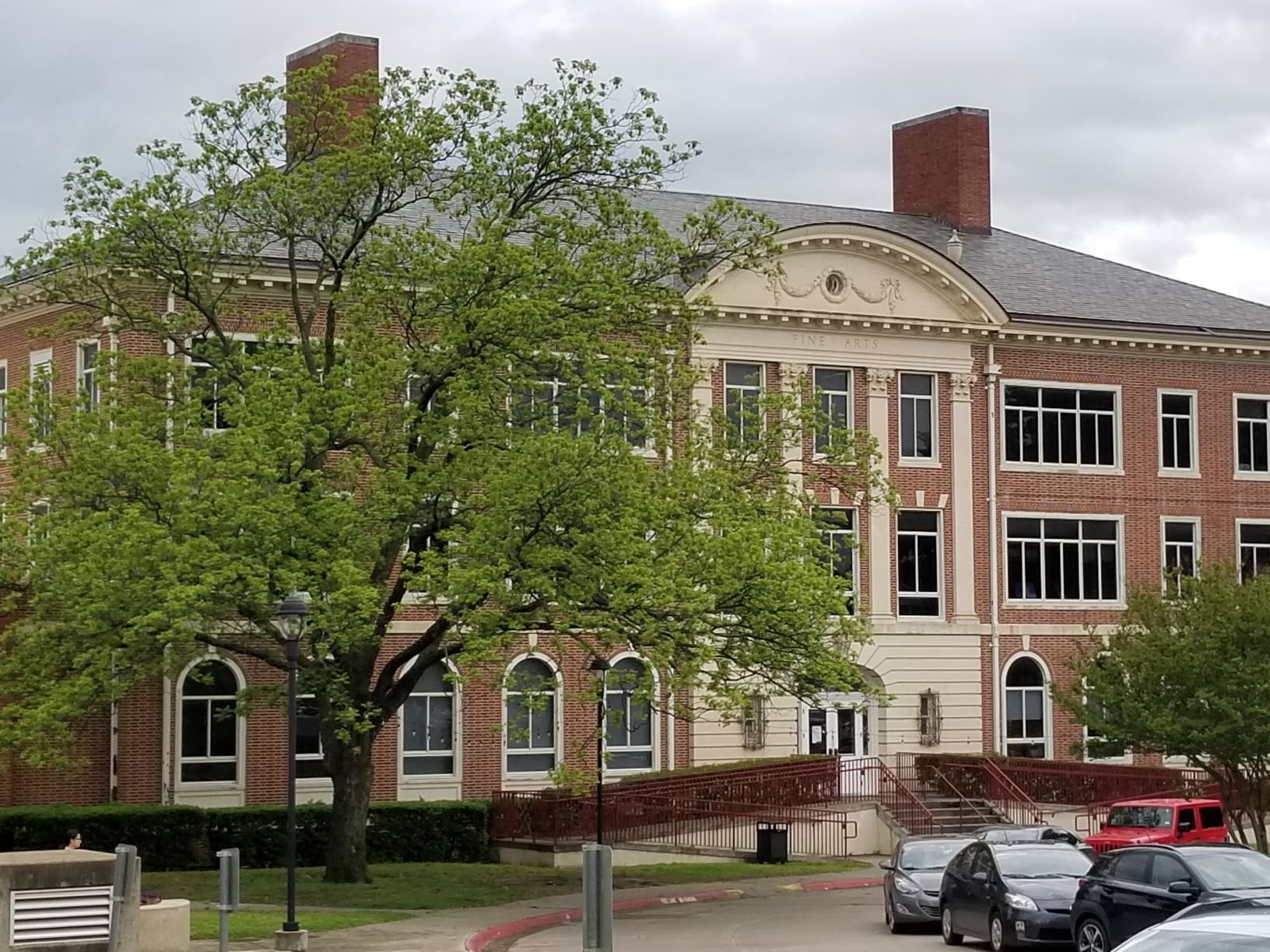 The Fine Arts Building, completed in 1936 at a cost of approximately $175,000, is a key feature of Pioneer circle—the cultural center of campus. Built in a Georgian-architectural style, the building is a visual landmark on campus. It boasts two wings used to display local artists as well as student exhibits for the public. In addition, the building came equipped with a large lantern room capable of seating 200 students, a library reference room, and twelve modern studios. One of the earliest projects undertaken in their new facilities, was the program's contribution to the Little Chapel-in-the-Woods, a landmark feature of Texas Woman’s University’s campus. Completed in 1938, the Chapel’s art work—including the stained glass windows, ceiling beam artwork, exterior cornices, wall patterns, and lectern carving—was done by students. The contribution of a dedicated building with galleries for student art, as well as local projects like the Little Chapel-in-the-Woods, has allowed students to publicly showcase their talents to the Denton community. Within its new building, the fine arts program was so popular that just under one in every five students in 1939 were enrolled in an arts course.

Texas Woman’s University has been dedicated to the advancement and teaching of the fine arts from its very beginnings. In 1903, it became the first state college in Texas to offer college credits in fine arts courses other than music to its students. In those early days, the fine arts program was housed in the Administrative Building, taking up an entire floor. However, space was still too short for the growing arts program.

At the beginning of the 1930’s, the country’s economic troubles during the Great Depression were clearly felt at Texas Woman’s University (called Texas State College for Women at the time).  In just two years, enrollment dropped from an all-time high of 2,549 in 1929 to a 16-year low of 1,737 in 1932. College administrators took steps to mitigate the effects of the depression, lowering costs as well as offering scholarships and more affordable housing options. It was during these trying times that Texas Woman’s University received one of its greatest opportunities.

In 1934, President Franklin D. Roosevelt’s administration introduced the Public Works Administration (PWA) as part of his New Deal in an attempt to combat the Great Depression. The PWA’s purpose was to assist state public construction projects with funds and Dr. Louis H. Hubbard, the president of the college at the time, was quick to see the opportunity. Hubbard secured PWA funding for $1.25 million worth of new buildings, an increase of fifty percent in campus value. Beginning in 1935, a dedicated Fine Arts Building was one of the first projects undertaken with government funding.

The Fine Arts Building has remained a stalwart piece of University geography since its creation in 1936. The building has housed countless students and exhibits, and has fostered a thriving arts program for over ninety years. In 1981, the building was renovated in order to suit a new class of students. The classrooms and galleries were “modernized” with better lighting, air conditioning, and projector screens. Additionally, the entire building was made handicap-accessible for the first time. These renovations strengthened the program, and gave students more resources for learning. The updated Fine Arts Building continues a legacy of Texas Woman’s University’s dedication to the arts in the present day.