The American Cowboy is one of the most recognizable American figures in American history. The Cowboys were responsible for operating one of the greatest cattle drive trails in American history, The Chisholm Trail. The Chisholm Trail was apart of the great cattle drives in the late 19th century and early 20th. The Trail stretched from San Antiono, Texas to Abilene, Kansas stretching across 3 separate states. After the Civil War, the cattle industry took a big hit. However, thanks to Jesse Chisholm the traveling Indian merchant, the Great Cattle Trails were established and flushed the midwest with business. The cattle drives were established to move cattle from the ranches and pastures in Texas, to the Rail Roads in the north for distribution.

These are the different Cattle Trails in the midwest during the time. The Chisholm, Sedalia, Western, and Goodnight-Loving Trails all originated in Texas. The Rail Roads would transport the cattle north where they would be made into prime beef. 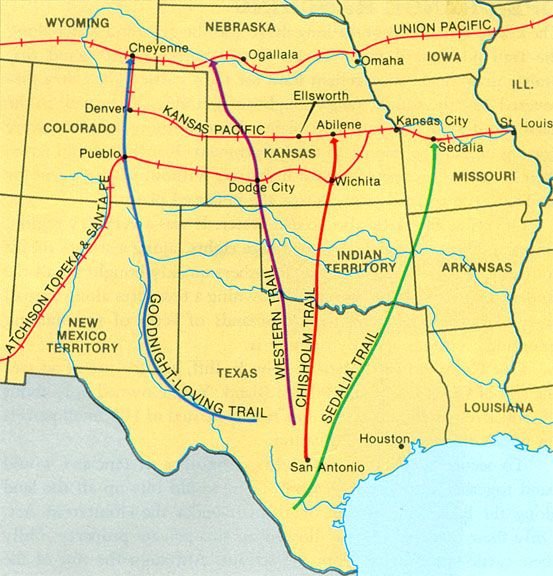 Here, Cowboys are crossing their cattle over a shallow river. The spontaneous rivers produced water and green grass for the cattle and a place to wash up find some relaxation for the Cowboys. 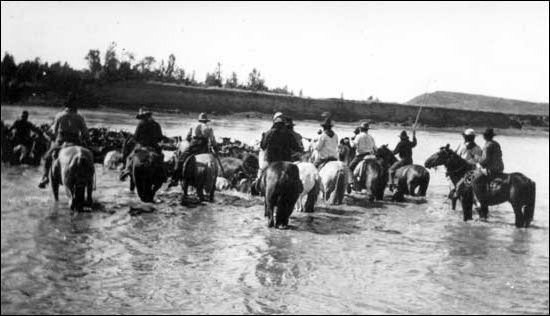 Jesse Chisholm is responsible for one of the most influential cattle drives in American history. However, before leading cattle drives he was a common trader in the Indian Territory. 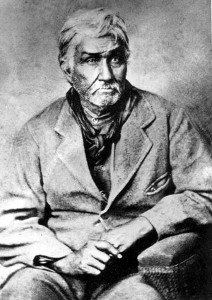 The Chisholm Trail was a cattle drive trail that started in San Antonio, Texas and ended in Abilene, Kansas. The trail stretched over 800 miles long and took around 3 months to travel. American Cowboys were responsible for safely transporting the cattle safely to Kansas and beyond.1 Along the trail, numerous cities were established along the trail to assist the Cowboys in their journey. The person who started the trail was a man named Jesse Chisholm.
Jesse Chisholm was a Scot-Cherokee who used the Indian routs to haul trade goods to Indian camps south of Witchita in 1864. Shortly after completing the trial he just completed, Jesse Chisholm was published in a newspaper in Denison, Texas on the 'Daily News' mentioning him traveling up the "Great Chisholm Trail"2. After the Plains Indians were forced off their land and the buffalo population was depleted, ranches sprang up all over the plains and were stockpiled with 'Texas Longhorns'. The sudden boom in the economy and establishing communities is one of the major reasons the Chisholm Trail was so pivotal in transforming the American West. Cowboys who would hear cattle, numbering from 5,000-45,000, would prove to be the backbone of the cattle drives and would earn almost 20,000 dollars per trip.2
Without workers to supply the high demand for cattle, the cattle drives would never have been as successful as they had. People who worked the cattle drives were known as 'Cowboys' and they were responsible for getting the cattle to the Rail Road in a safe and timely manner. Unfortunately, many challenges and obstacles stood in the way of the Cowboys getting their money. Along the trail, Cowboys would encounter Buffalo induced stampedes, Indian Territory, Dangerous River  Crossings, and the occasional gunfights.1It is safe to say that being a cowboy was not for the weak. The Cowboy's helped evolve the landscape and culture around the American Plains. After the "Great Cattle Drives" more ranches were popping up and more and more people wanted land and cattle.

The cattle drives also reshaped the entire economy of the American Plains while they ruled the wild west. The demand for beer in the north was growing bigger and bigger by the day. To accommodate for the higher demand the cattle drivers started taking more cattle per trip, as well as Cowboys too. During his time still conducting the trail, Jesse Chisholm met a man named Joseph McCoy, a businessman from the north. However, Jesse Chisholm had no idea this meeting would change everything for him. Joseph McCoy saw the potential of the Chisholm Trail and the railroads. He worked with the railroad companies to get contracts settled to sent their beef to the eastern markets through Kansas.4

During its peak, the Chisholm Trail helped establish cities along the trial and some of those cities are still flourishing today and they honor the Chisholm Trail. In the Google Maps section above you will be able to see the Chisholm Trail Museum in Duncan, Oklahoma. However, there are many more that have benefited from the Chisholm Trail in the past. Without the Chisholm Trail boosting the spirits and wallets of the entire community, Texas and Oklahoma would've been entirely different than we are today.  The Cattle Drives employed thousands of families, established multiple cities, established an entire culture of ranching and farming, and generated one of the most well known prolific cultures in American history, establishing the image of the American Cowboy that is still being portrayed in movies to this day.

2.Chisholm Trail | The Encyclopedia of Oklahoma History and Culture. Accessed May 09, 2019. https://www.okhistory.org/publications/enc/entry.php?entry=CH045.