Built in 1903, Old Main served as the sole instructional building for the Girls Industrial College of Texas (now, Texas Woman’s University) after an act of the 27th Legislature approved a bill to establish a state college for women in 1901. The College opened September 23, 1903 with 186 students and 14 faculty members. The four original academic departments—English-Science, Fine and Industrial Arts, Commercial Arts, and Domestic Arts—were designed to provide a literary and cultural education as well as instruction in practical skills that would prepare students to manage their future homes and families.

Students in early 1900s relaxing on the lawn in front of Old Main before the addition of wings on either side. The grounds surrounding the school were cultivated by students studying horticulture. (Courtesy TWU Woman's Collection) 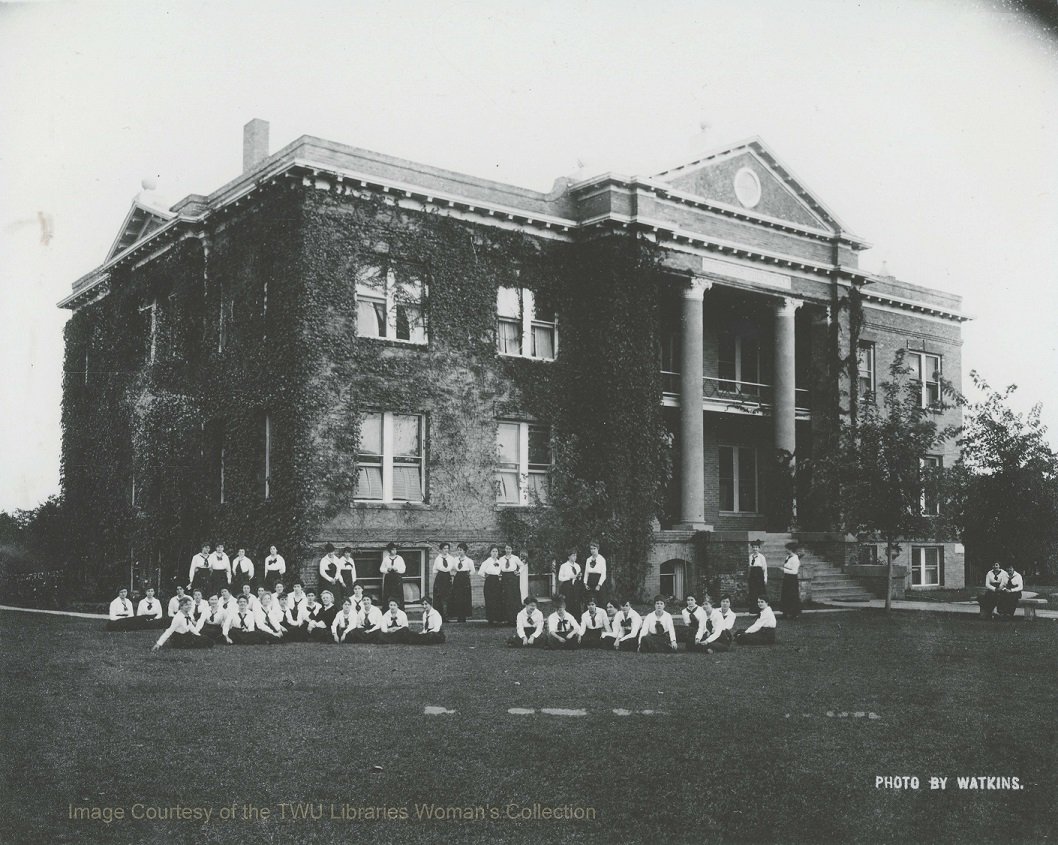 Early view of Old Main from the bygone entryway. In 1916 wings were added to accommodate the increased enrollment and recently expanded curriculum that made the school a degree-conferring institution. (Courtesy TWU Woman's Collection) 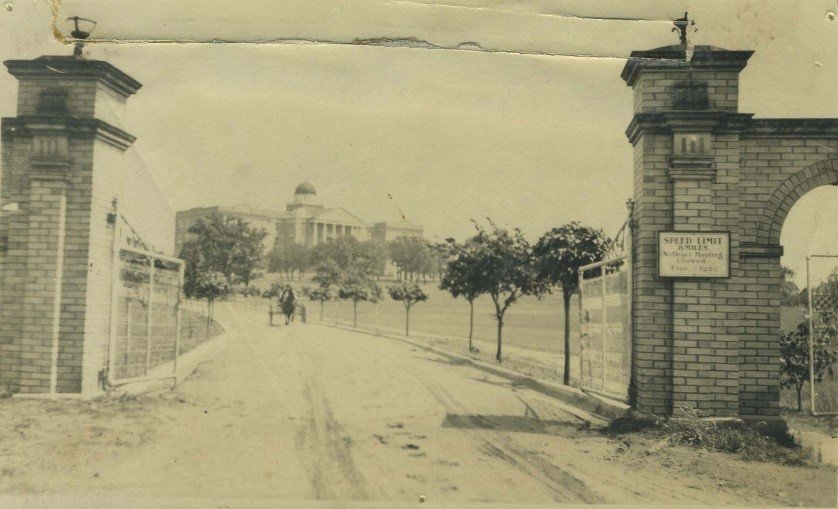 The "Winged Victory" statue located in Old Main's portico was purchased from the Louvre and shipped from Paris in 1982. It will be relocated inside the building in the future lobby of the Institute for Women's Leadership. 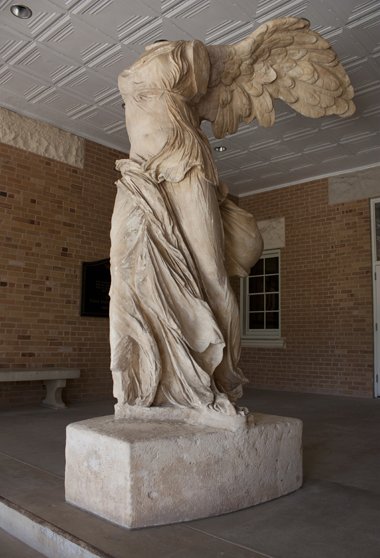 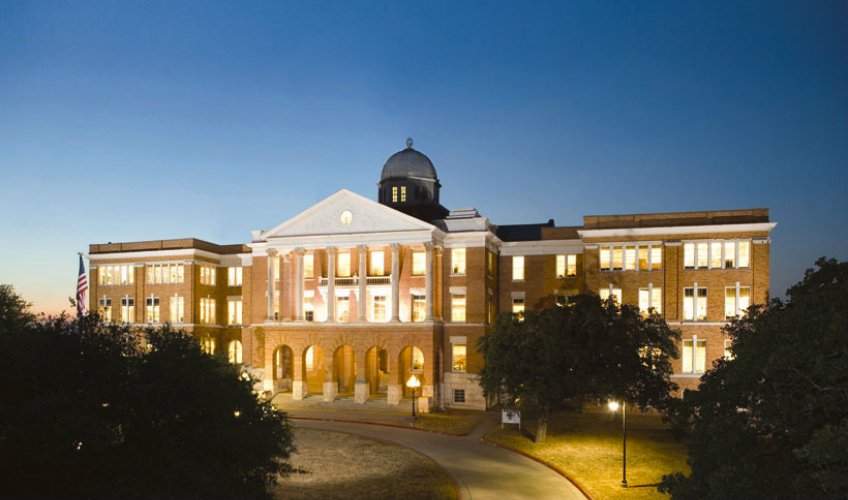 The cornerstone, laid on January 10, 1903. The motto “We learn to do by doing” was suggested by founding member of the Board of Regents, Helen Stoddard.

As the first building on campus, Old Main represents the roots of Texas Woman’s University; built in 1903, it embodies the effort of a rural state to reorient itself in step with advancing industrialization and stands as a symbol for the changing roles of women in the United States. While attention turned toward the need for higher education that could provide both academic and practical instruction, the long-held belief that women should remain within the domestic sphere began to yield to a more modern attitude. The meeting of these societal transformations inspired reform-minded citizens of the Progressive Era to expand access to higher education for women; from 1880 to 1920, 47 women's colleges were founded in the United States.

Citizens in Texas began advocating for a state college for women as early as 1891. Although the progressive spirit seized much of the country, Texas legislators moved slowly, only passing the measure after three failed attempts in 1891, 1897, and 1899. Ten years after its conception, the bill’s reintroduction in the 27th Legislature resulted in a tie in the House and Senate, finally succeeding thanks to the affirmative votes of each chamber’s presiding officer. The commission charged with finding a location for the school considered several cities—including San Antonio, Austin, Tyler, and Waco—ultimately selecting Denton for its, in their words, “healthfulness and… elevating moral and social environment.”1

Constructed by Dennis Mahoney of Waxahachie at a cost of approximately $45,000, Old Main is distinguished by a striking silver dome towering over the brick and limestone structure. This and the stately row of white colonnades located above the entrance characterize the neoclassical revival style of the building. In the school's early years, the fourth floor held an auditorium, the first floor boasted the first ever laboratory designed specifically for Home Economics, and the rest comprised a mixture of classrooms, offices, and an English room with a small library of 460 books. The classrooms housed equipment that might seem peculiar in today’s universities, including churns, ironing boards, sewing machines, and a kiln. Along with these were the more typical items like microscopes, typewriters, and drawing tables.

The cornerstone of the building bears the inscription suggested by Helen Stoddard, a founding member of the Board of Regents, “We learn to do by doing.” This motto evokes the philosophy that shaped the school, originally called the Girls Industrial College of Texas, in its early years. Students received a literary and cultural education similar to traditional universities, but particular emphasis was placed on acquiring practical skills, especially those pertaining to running a home. The 186 young women comprising the original student body could choose from courses like literature, chemical studies, or nursing. However, all students were required to study domestic training in such skills as needlework, dressmaking, cooking, care of children, and practical housekeeping. At the culmination of her studies, each student was required to make her own graduation dress.

Old Main has grown in step with increased enrollment and an expanding curriculum. In 1916, wings were added to the east and west to accommodate more students and more classes. As the campus developed around Old Main, its designation changed from the sole instructional center to the Academic Arts building and then the Administration Building. Today, it houses the fashion and textiles programs. While sewing machines and a focus on dressmaking may have returned to Old Main, students studying inside are not equipping themselves with skills to use solely in the home, they are training in professional-quality design laboratories and using advanced technology to prepare them for careers in today’s flourishing apparel industry.