The Coleman Theatre is a historic venue and a proud symbol of the small town of Miami, Oklahoma. It was opened in 1929 and named after the owner, George Coleman. Its Spanish Colonial architecture is complemented by its French Louis XV-style interior. During its peak, the vaudeville theatre hosted many famous entertainers. It features its “Mighty Wurlitzer”, a restored Wurlitzer pipe organ. It is the only Wurlitzer pipe organ in the world that is located in its original setting. The Coleman Theatre has been continuously open since 1929, and was listed on the National Register of Historic Places in 1983.

The exterior of the Coleman Theater as viewed from the southeast on North Main St. 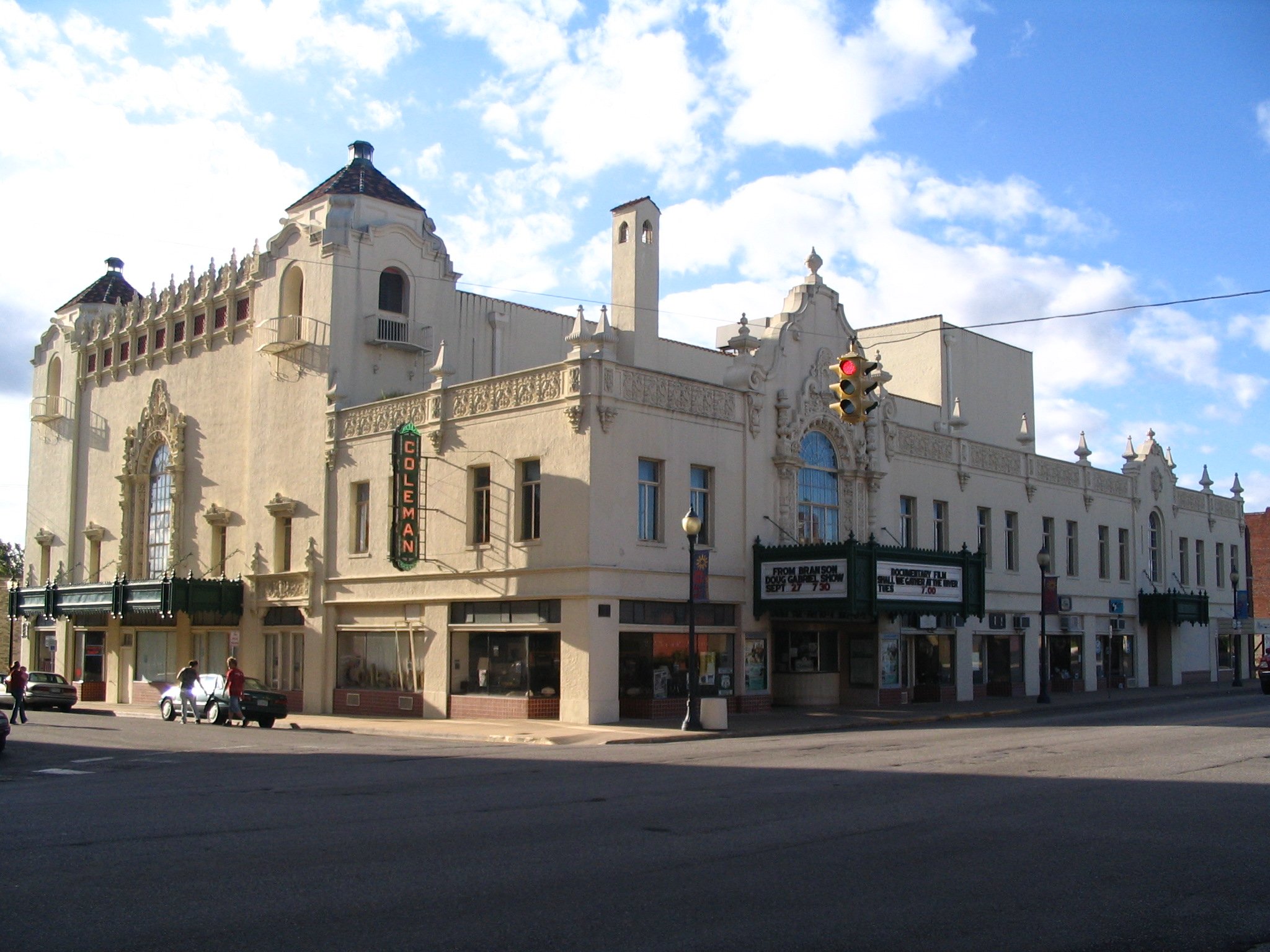 The souvenir program provided on opening day on April 18th, 1929. 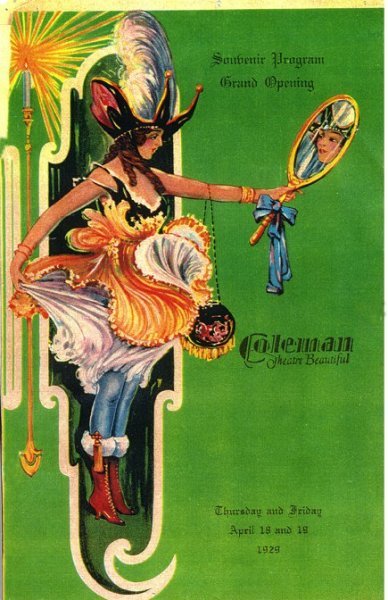 A picture taken of the interior of the theatre during opening weekend. 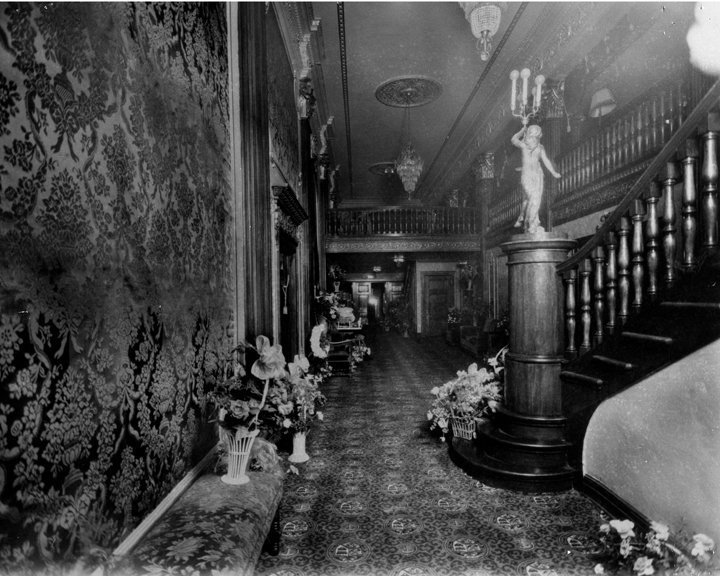 A picture of the concert hall including its grand chandelier and seating. 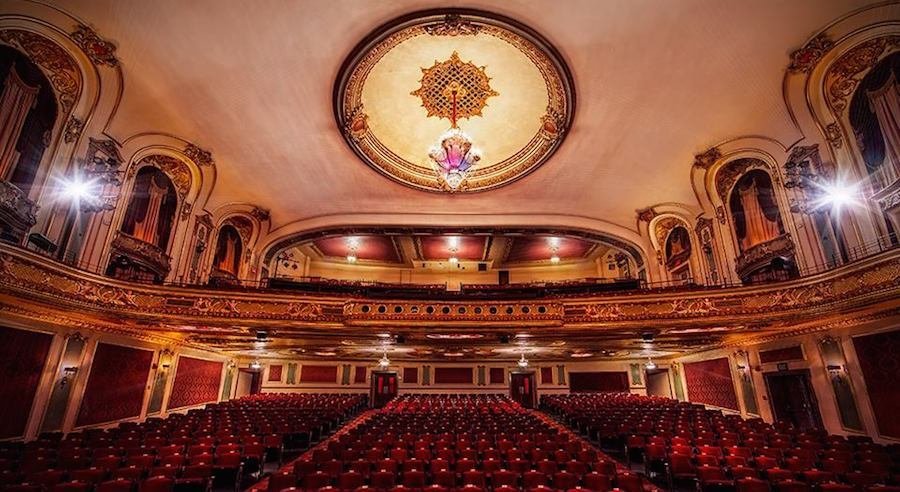 The "Mighty Wurlitzer" is the Coleman Theatre's original Wurlitzer pipe organ. Unlike church organs, the Wurlitzer contains various instruments within its base, allowing for a diversity of sound. 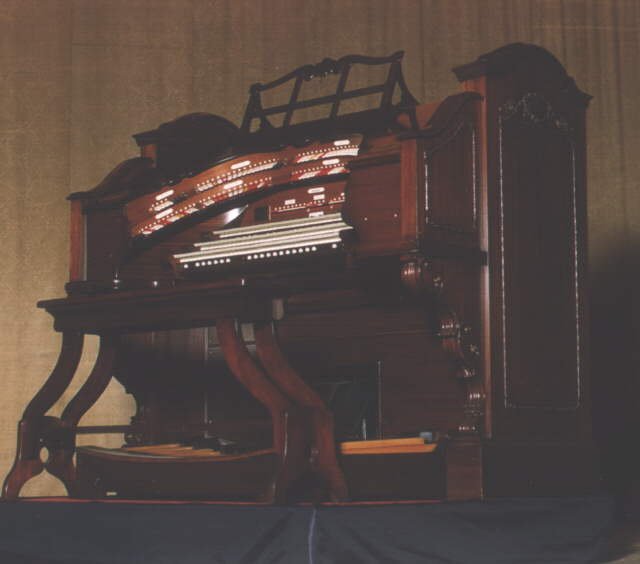 The construction of the theatre was funded by its owner, George Coleman. George Coleman was a successful businessman that had earned his wealth through the local mining industry. He was an avid supporter of different types of entertainment and wanted to build the most magnificent theatre for miles around. It was built in just 330 days, and the $600,000 theatre quickly grabbed attention throughout the Midwest.[1]

The theatre was widely recognized by its extravagant Spanish Colonial mission style exterior and elegant Louis XV style interior. It also featured a grand chandelier made of crystal and an original Wurlitzer pipe organ in its concert hall. This 18,000 square-foot theatre included a two-story east side, and a three-story west side. The main entrance was constructed on the east side of the building along with commercial storefronts just north of its main entrance and an unfinished ballroom.[2]

The Coleman Theatre opened on April 18th, 1929. During its opening night, the theatre sold out its 1600 seats at $1 per person, and delivered its first performances. These performances were of the French vaudeville style, with forms of entertainment such as dancing shows, various comedy acts, and plays. During its reign, famous entertainers of the time performed here. Some of these figures included: Will Rogers, American burlesque dancer Sally Rand, film actor Tom Mix, and stage magician Harry Blackstone.[3]

The fall of vaudeville theatre during the Great Depression had a great influence on the theatre's decline. After George Coleman's death in 1945, ownership of the theatre belonged to his wife. Unlike George, she had no interest in operating the theatre. As a result, she sold it to a private movie company, and transitioned the theatre's function into merely hosting movies. During this transition, the movie company sold its prized Wurlitzer pipe organ and replaced the seats in attempt to "modernize" the setting. Over the years, the theatre deteriorated due to old age and lack of maintenance, and was near the verge of closing. The theatre was riddled with mold, had holes in its walls and ceilings, and was constantly leaking with water; even its grand chandelier had broken into pieces. Due to the poor conditions, the private movie company gave the theatre back to the Coleman family in the 1980s. The family then decided to give the theatre to the city of Miami.[4]

Restoration efforts began in 1989 with the help of Barbara Smith, Executive Director for the theatre. Barbara, along with a small group of others, decided to put on an event called "Night of Nostalgia". Barbara, being the high school theater teacher at the time, wanted to include the community in the performance. It consisted of Barbara's students performing dance skits along with story telling about people's past romances. This event emphasized the symbolic importance of the theatre for the community. The popularity of this event spread quickly and inspired a full house despite the theatre's condition. With members of the city council in attendance, the city of Miami was convinced to help restore the theatre back to its former glory.[4]

The city knew that restoring the theatre would be far too expensive. So, an agreement was made between the city of Miami and its dedicated theatre supporters. The city provided furnishings and $50,000 per year towards the restoration. In the community, volunteers provided labor and money was raised through donations and fundraising. After years of renovating, the Coleman Theatre returned to its state of power and elegance. The walls were redone and painted with its gold trim. The grand chandelier was refurbished. Their new carpet was replicated from its original design. They reconstructed 1120 new seats that matched the originals. Their "Mighty Wurlitzer" was found, sold back to the theatre and was restored.[4] Restoration projects even managed to complete the construction of the 5,000 square-foot ballroom that was never finished.[1] Even with these restoration projects at full force, the theatre still did not close.

To this day, it continuously hosts public performances and private events, and is actively involved with the community. The restoration of the Coleman Theatre has brought the city of Miami together. It was done with no private company involvement, only through volunteers like Barbara Smith. It is a cherished symbol of Miami that constantly reminds citizens of the town's rich cultural history. The restoration of this theatre proves that there is great power even in small communities such as Miami. With the appropriate support and dedication, anything can be done.

The mission here at the Coleman Theatre is to provide quality arts and educational programming, while maintaining and promoting the historic significance of the theatre. [3]