The Kickapoo Land Run is also known as the Land Run of 1895 or Oklahoma Land Rush and it was the smallest and last land run in the state of Oklahoma. The land occurred on May 23, 1895, the land was delayed for five years. The reason this land run happened was because it came about with an agreement between the Kickapoo Indians and the federal government that gave individual Kickapoos 22,640 acres. The government then purchase the rest of the acres which was 183,440 acres. 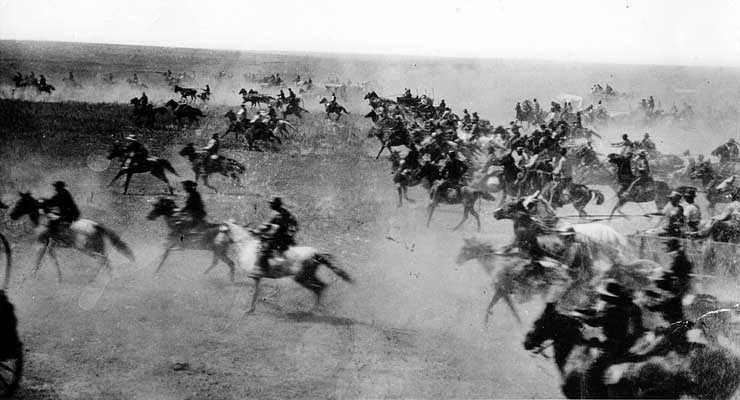 The Kickapoo Land Run was the fifth and final land run in Oklahoma. It occurred at noon on May 23rd, 1895. They had been delaying the opening for about five years, because there was a disagreement with the Cherokee Commission about the land. The Kickapoo's were divided into two factions, one that accepted the white culture and the other faction did not. Congress passed the Kickapoo Allotment Act on March 30, 1893.

The leftover land that added up to be about 184,133 was available for non- Indian settlers. They were given a reservation that was east by the former Sac and Fox Reservation and west of the Indian Meridian. There was plenty of land available for homesteading.

On May 18, 1895 president Cleveland signed a proclamation to open the land. About ten thousand people came to this land to settle. They had to arrest a lot of sooners who came to the land to early and settled when they were not allowed to. Women were allowed to participate in this land run, like they had done in several others in the past. A few of the people that participated in the land run took pieces of land on the north side of Deep For River filed with the government and offered about ninety thousand acres for school land to bidders to lease for up to five years. They did this for those people that were not as successful in the land run.

The Kickapoo land run increased many counties, such as the Lincoln, Pottawatomie, and Oklahoma. The land was a small amount of land, but there was a large amount of people that participated in the land and claimed the same piece of property. The counties began declaring towns and establishing post offices in 1895.

Cheyenne, Southern | The Encyclopedia of Oklahoma History and Culture,www.okhistory.org/publications/enc/entry.php?entry=KI005.