This dome-shaped mass of igneous rock, known to geologists as a "laccolith," has long been a sacred place to area Native American tribes. The site is part of Bear Butte State Park and was elevated to the status of a National Historic Landmark in 1981. Standing at 4,426 feet, Bear Butte was seen as a place to connect to nature and sacred spirits by area tribes for centuries. The site was used by explorers of European descent as a reference point, especially following the influx of fortune seekers in the area when gold was discovered in the Black Hills. Since 1961 Bear Butte has been recognized as a state park, allowing hiking and viewing of the mountain. Native tribes continue to hold ceremonies at the site. While some of the ceremonies are restricted to tribal members, others are open to the public.

Bear Butte as it stands today. 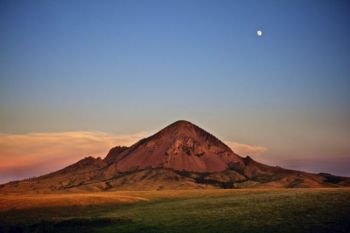 George Custer is best known for his ill-advised offensive that led to his death, but he was also an experienced officer and explorer. 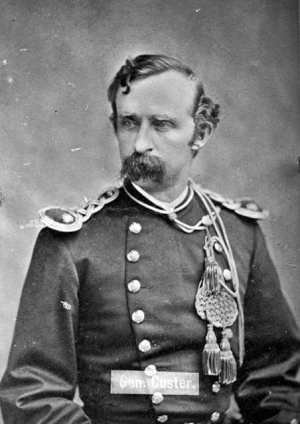 Within the Black Hills mountain range of South Dakota is the rock formation known as Bear Butte. This geological marvel is recognized as a National Historic Landmark and is also home to a state park. The site continues to serve as a sacred religious site to local Native American tribes as well. Standing at an elevation of 4,426 feet, Bear Butte was formed from a welling of magma that failed to crack through the earth’s crust which hardened into the mountain that stands today.

The site became well-known to settlers of European descent after George A. Custer led an expedition to the Black Hills in 1874. Custer was sent out in search for gold and a place to set a military fort. After he found gold in the Black Hills, Bear Butte became a reference point when following Custer’s trail. This discovery brought many to the area and led to the government's decision to break the treaty of 1868 that declared that the Black Hills belonged to the Sioux. A gold rush followed Custer’s find, yet relatively little gold was found in the Black Hills.

When prospectors violated the treaty of 1868, the Sioux asked for the government to enforce their treaty. When the government failed to prevent encroachment on Sioux lands, some Native tribes retaliated against the settlers. This conflict led to the U.S. Government confiscating the land in 1877 and forcibly relocating the Sioux.

Bear Butte became a state park in 1961. Today measures are taken to protect the religious rights of the tribes who visit the mountain. Visitors are advised to not touch religious artifacts and stay off restricted land. Some religious ceremonies are available for public viewing, and the site also holds hiking trails for its visitors. With the recent increase in people and overall development to the area, there are concerns from the local tribes. One of these concerns is noise, with the tribes stating that volume of traffic in the summer occasionally breaks the peace of religious ceremonies and harmony of the mountain.