Located on the campus of Oral Roberts University in Tulsa, Oklahoma, the Praying Hands statue is a well known cultural landmark for many people. The statue was cast in Mexico in 1980 before being moved to its present location and is one of the largest bronze sculptures in the world. The massive sixty-foot statue depicts two massive hands placed in the praying position that highlights the religious history of Oral Roberts and the University that bears his name. Oral Roberts was a well-known Christian Evangelist and the statue was dedicated outside of the City of Faith medical center that closed in 1989. The statue was later moved to its current location.

Image of the Praying Hands Statue from Tulsa People. 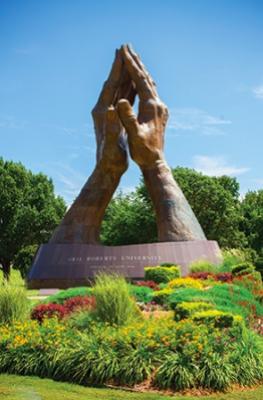 Image of the reconstruction of the Praying Hands Statue during its relocation. Image from Tulsa People. 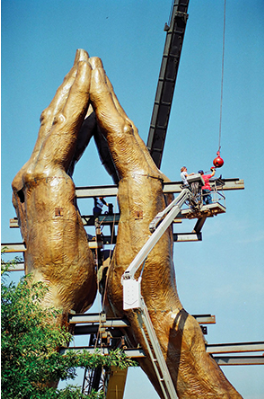 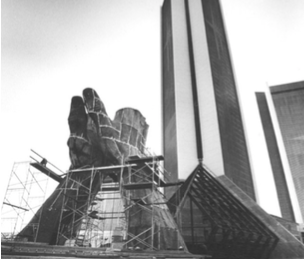 The statue is commonly referred to as the praying hands statue because it depicts the hands of a person praying. Oral Roberts was a supporter of healing given through the power of God. The statue is purposefully in a praying stance to symbolize the prayer that is involved in the faith based healing. Inscribed on the statue is a Bible passage Luke 2:52 which says, “And Jesus grew in wisdom and statue, and in favor with God and men.” The statue is said to be the largest bronze sculpture in the world. The statue reaches sixty feet high and weighs thirty tons. The Praying Hands sculpture was cast in Juarez, Mexico in 1980 before being transported to Oklahoma.

Originally, the statue was located in front of a medical center on Oral Roberts University called “City of Faith”, but was moved in 1991 and now resides in the entrance drive of Oral Roberts University. The address is 7777 South Lewis, Tulsa Ok 74136. The statue was originally referred to as “The Healing Hands” which matches its original location. City of Faith was a medical center devoted to faith healing, which prayer was a huge part of. Oral Roberts decided to build the City of Faith Medical and Research Center due to an encounter with God. Roberts was healed of Tuberculosis when he was young and believed God healed him so he could then share the healing power of God with his generation.

The sculpture was created by Leonard McMurry, one of Oklahoma’s most well-known sculptors of the twentieth century. Leonard McMurry studied at West Texas State College, Texas A&M University, Washington University, and Syracuse University. McMurry was well known for his bronze sculptures, most of which were figurative. Other notable works of McMurray in Oklahoma include: The 86er at the Oklahoma City Civic Center, The Legend of the Great Westerner (informally called "Buffalo Bill") at the National Cowboy and Western Heritage Museum, and a series of twenty-one busts of former Oklahoma governors.

This sculpture is significant because of the story it tells about Oral Roberts and Christian evangelism in Oklahoma during the time of the founding of Oral Roberts University and the creation of the praying hands statue. The statue is still a well-known landmark in the Tulsa area and attacks many visitors to the staggering statue.