This unique monument was dedicated in 1986 and is located in front of the Winston County Courthouse in Double Springs, Alabama. The monument commemorates the county's division in loyalties during the Civil War. While Alabama joined the Confederacy, this section of the state included many who remained loyal to the Union and many more who hoped to stay neutral and avoid the conflict. This area included so many who opposed secession that some in the county declared their intention to secede from Alabama and form the Free State of Winston at the start of the war. This unique statue was sculpted by Branko Medenica and is one of only a few monuments that recognize the history of areas in Confederate states such as Double Springs where subsistence farming and other factors made this part of the South more similar to parts of Appalachia where a significant portion of the population also rejected secession. 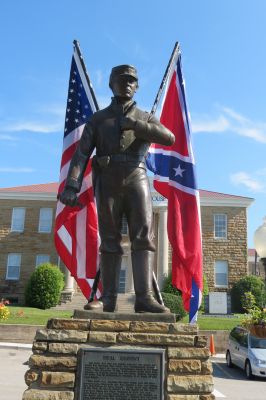 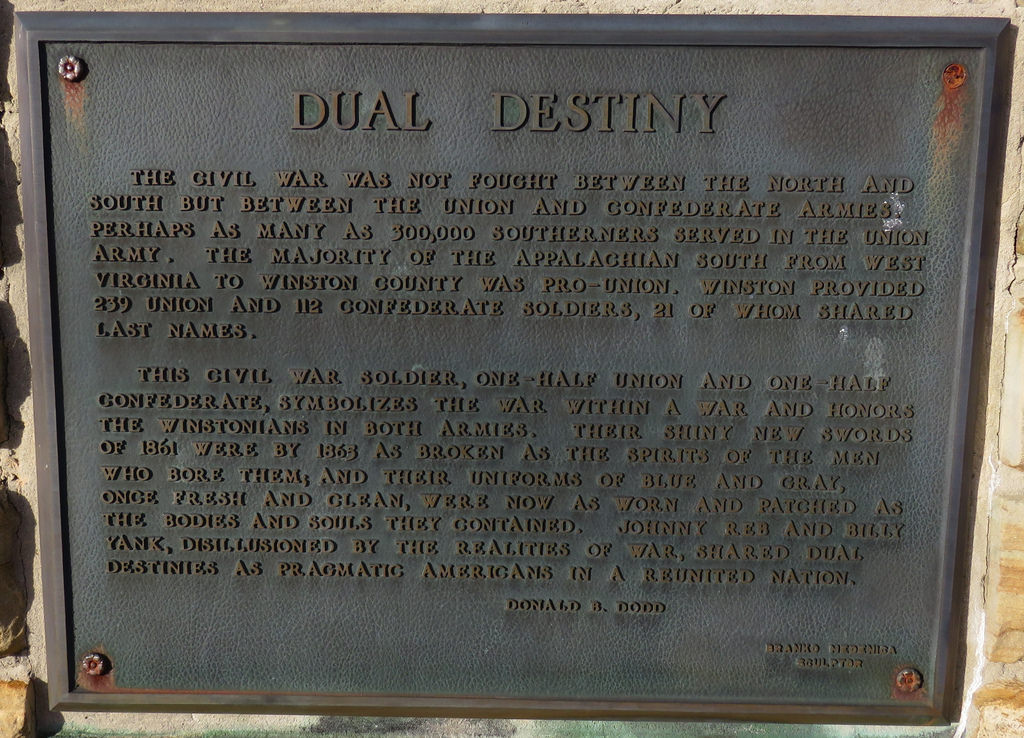 Winston County Alabama elected Christopher Sheats to represent them and register their opposition to leaving the Union in Alabama's secession convention. During the Civil War, 239 men in the county fought for the Union and 116 men fought for the Confederate. sAmong these men, surnames were shared, meaning the men from the same families fought along side one another and against one another. Christopher Sheats was a school teacher and only 22 years old when he attended the secession convention and refused to sign the secession ordinance. Sheats was later imprisoned by Confederate leaders and charged with treason due to his refusal to sign the ordinance.

Alabama was a Confederate state and located in the Deep South, yet even in this state there were strong pockets of opposition to secession. Winston Country men even led an effort to secede from Alabama and publicly sided with the Union over the Confederacy. Union loyalists met at Looney's Tavern to discuss forming the Free State of Winston. Perhaps recognizing the risk of reprisals, the effort was never formalized. The fears of Union Loyalists were confirmed by acts of violence against the people of Winston County at the hands of Confederate forces, including the murder of a local judge. Confederate forces also launched several raids in the country that resulted in the capture of pro-Union men and Confederate deserters from the area who had returned home.

Although there were more Union loyalists in the county and those who supported the Confederacy were in the minority, the Dual Destiny statue was designed to depict both sides involved in the Civil War equally. The statue is one that tells a story of a state and county that were divided. The division of Winston County is still remembered every year with a musical drama that tells the story of Christopher Sheats and the events that unfolded at Looney's Tavern.

The Dual Destiny Monument is not located indoors, so it may be seen at any time day or night.