This natural rock fissure is known as the location where Israel Putnam killed a wolf in 1742. Putnam went on to fight in the Revolutionary War, and the story of his encounter with the unfortunate wolf helped secure his status as a folk hero. Putnam was one of many early settlers who deliberately killed wolves to protect their livestock herds. These efforts decimated New England wolf populations; according to some stories, the wolf shot by Putnam was "the last wolf in Connecticut." Today, visitors to Mashamoquet Brook State Park can visit the historic den.

Visitors can hike out to the Wolf Den, which remains relatively unchanged in appearance since Putnam's time. 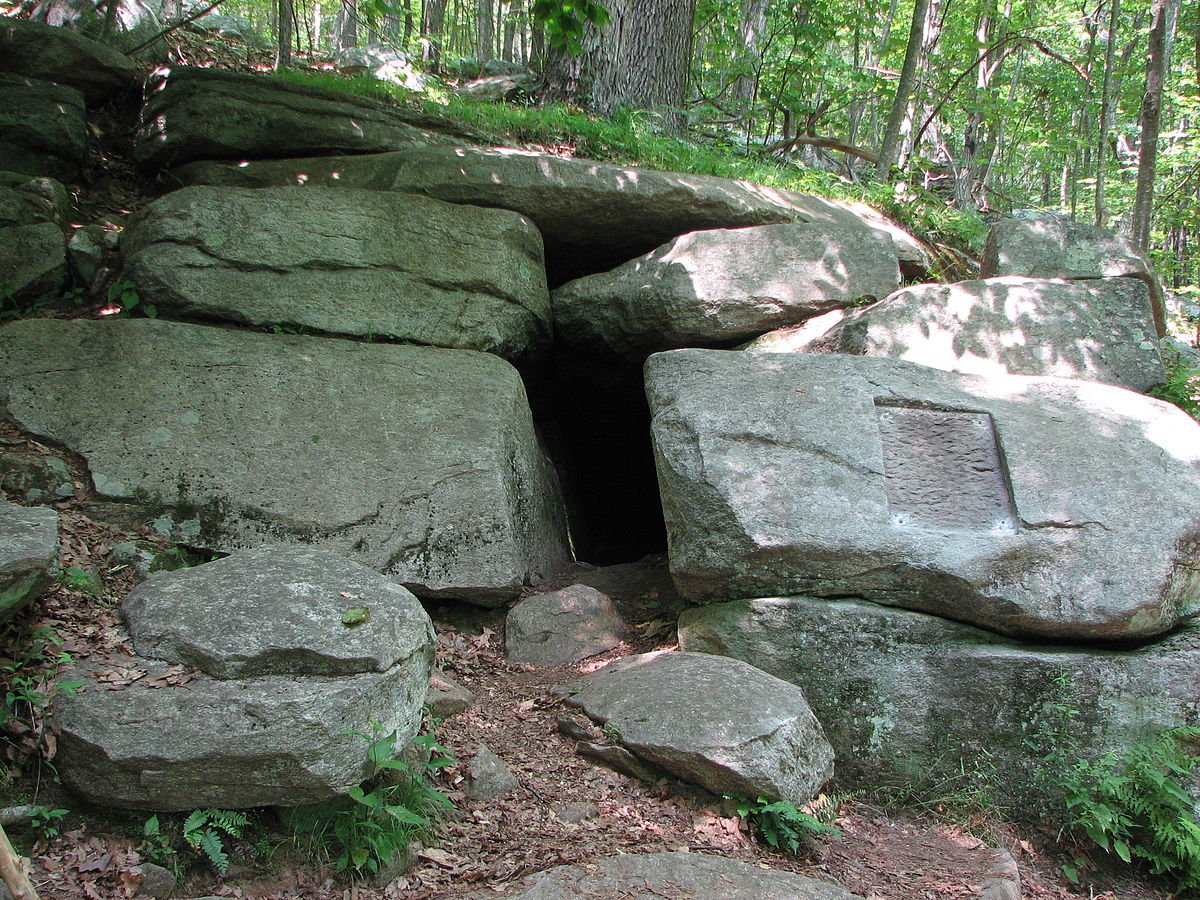 The Wolf Den is a small cave formed from gray gneiss rock. It is located within Mashamoquet Brook State Park and is accessible by a hiking trail. The cave entrance measures around 3' high and 2' wide, and the inside is now partially filled in.

Israel Putnam (1718-1790) was born in Salem Village (now known as Danvers), Massachusetts to a family of Puritan farmers. His birthplace and childhood home in Danvers can still be visited today. Putnam moved to Connecticut in 1740 and two years later was involved in killing a wolf that had been attacking sheep belonging to Pomfret farmers. David Humphreys recorded this episode in a 1788 biography, The Life and Heroic Exploits of Israel Putnam (which you can read at the link below).

According to the legend, Putnam faced considerable challenges as he tried to make a living off his farm:

"The first years on a new farm, are not however exempt from disasters and disappointments...Our farmer [Putnam], sufficiently occupied in building a house and barn, felling woods, making fences, sowing grain, planting orchards, and taking care of his stock, had to encounter, in turn, the calamities occasioned by drought in summer, blast in harvest, loss of cattle in winter, and the desolation of his sheepfold by wolves" (Humphreys, 8).

Putnam allegedly lost an astounding 70 sheep and goats in one night after an attack by a single wolf. This wolf was well-known to farmers in the community and eventually became such an "intolerable nuisance" that Putnam and a group of farmers decided to hunt it down. They tracked the wolf back to its den and made several unsuccessful attempts to flush it out. Eventually, Putnam decided to enter the cave himself:

"Having groped his passage to the horizontal part of the den, the most terrifying darkness appeared in front of the dim circle of light afforded by his torch. It was silent as the house of death. None but monsters of the desert had ever before explored this solitary mansion of horror...He came to the ascent, which he slowly mounted on his hands and knees until he discovered the glaring eye-balls of the wolf...Started at the sight of fire, she gnashed her teeth, and gave a sullen growl" (Humphreys, 10-11).

Putnam shot the wolf and dragged its body back out. Throughout this whole endeavor, he wore a rope around his body so that his companions could pull him back out of the cave. This act earned Putnam a reputation for courage among the townspeople. Humphreys depicts the incident as a turning point in Putnam's success as a farmer. Before, he had struggled to make ends meet, battling drought and harsh weather. Now, however, his crops and livestock prospered:

"His pastures and meadows became luxuriant. His cattle were of the best breed, and in good order. His garden and fruit-trees prolific" (Humphreys, 13).

Ultimately, this episode boosted Putnam's standing in his community, earning him nicknames such as "Old Wolf Put" and "Wolf Putnam." He spent the following years enjoying considerable success as a farmer and tavern-keeper. The legends surrounding his name only grew during the 1750s and 60s, when he served in the French and Indian War, and the 1770s, when he fought in the American Revolution and played an instrumental role in the 1775 Battle of Bunker Hill.