Story and Reparations of the Tulsa Race Riots

For an event considered to be one of the worst racial incidents in the history of America, the Tulsa Race Riots are not an event that is familiar in the minds of Americans or even Oklahomans. Since June 1921, this event has impacted the social context of Oklahoma, despite not even being taught in the classrooms of Tulsa. The reparations and response of both the public and the government after this incident were both profound and lasting, thus changing the social and political climate of Tulsa, Oklahoma.

The Memorial created as a result of the Tulsa Race Reconciliation Act that was placed outside the Greenwood Cultural Center near downtown Tulsa, Oklahoma. 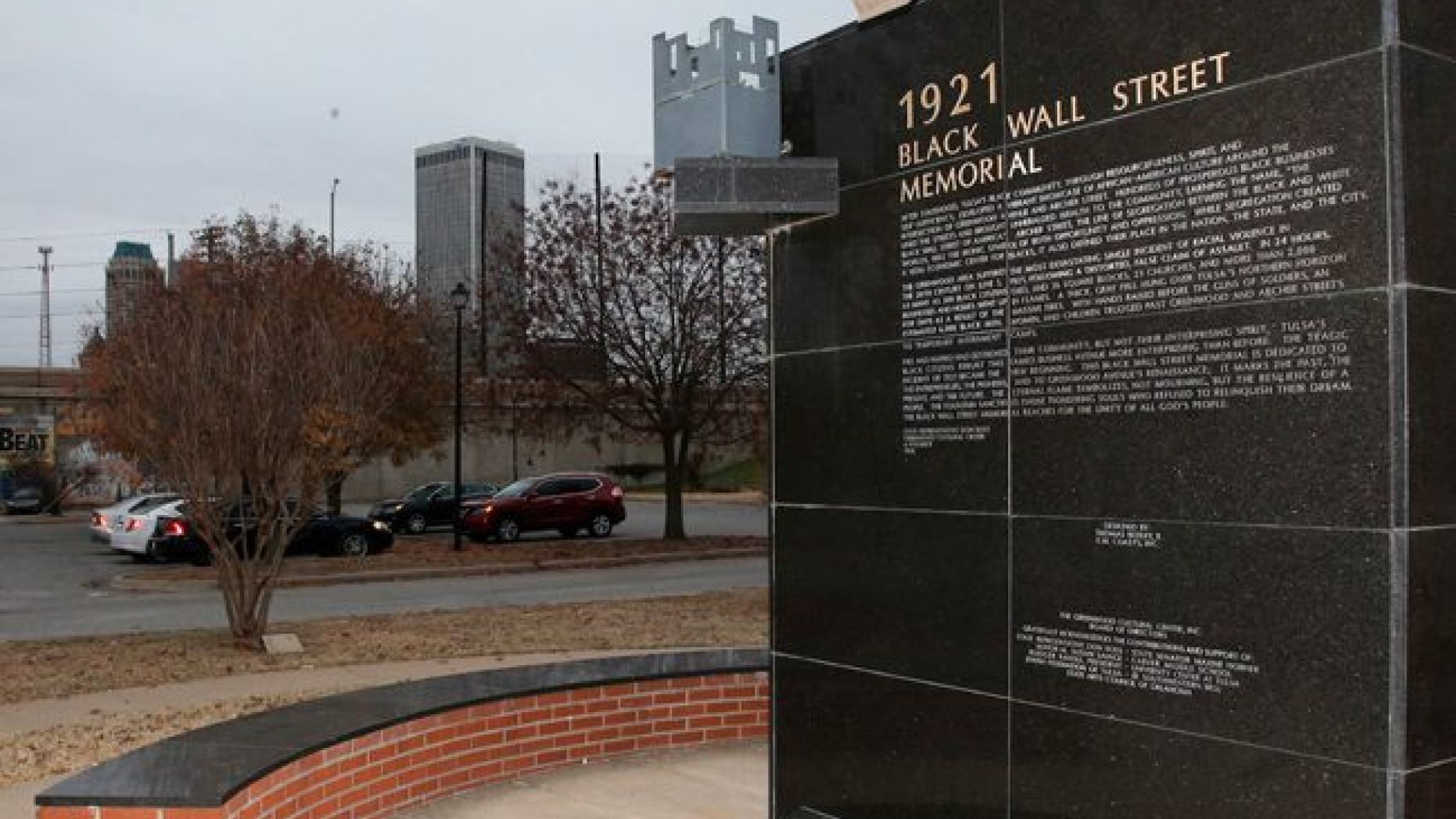 A newspaper clipping from the Tulsa Daily World newspaper on June 1st, 1921 detailing the events that started the Tulsa Race Riots. 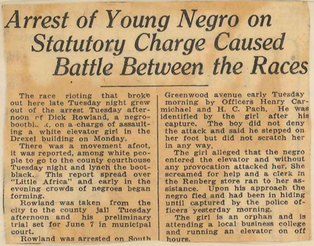 This picture shows a few blocks of the destroyed property after the riots from the article published from The Crisis newspaper. 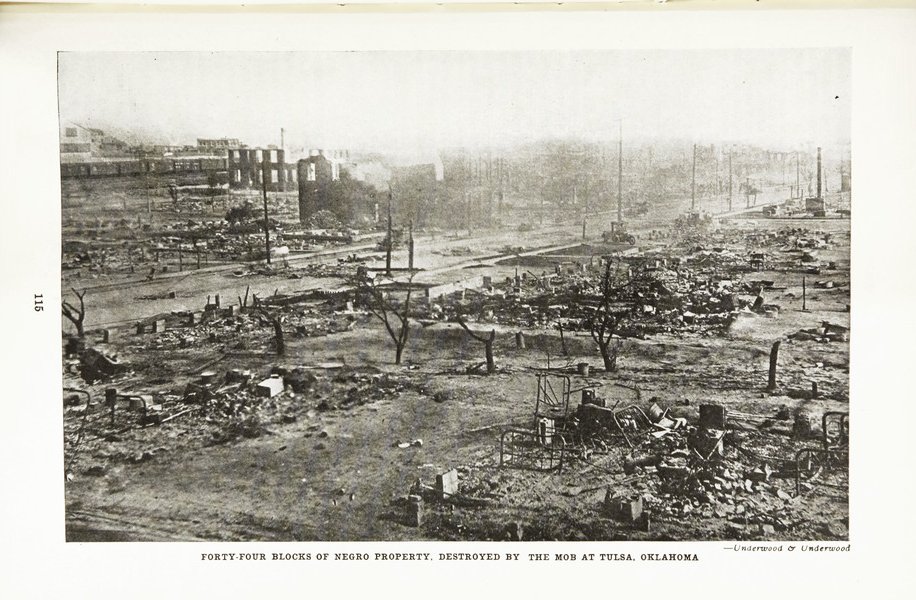 Picture of captured African Americans during the Riots. 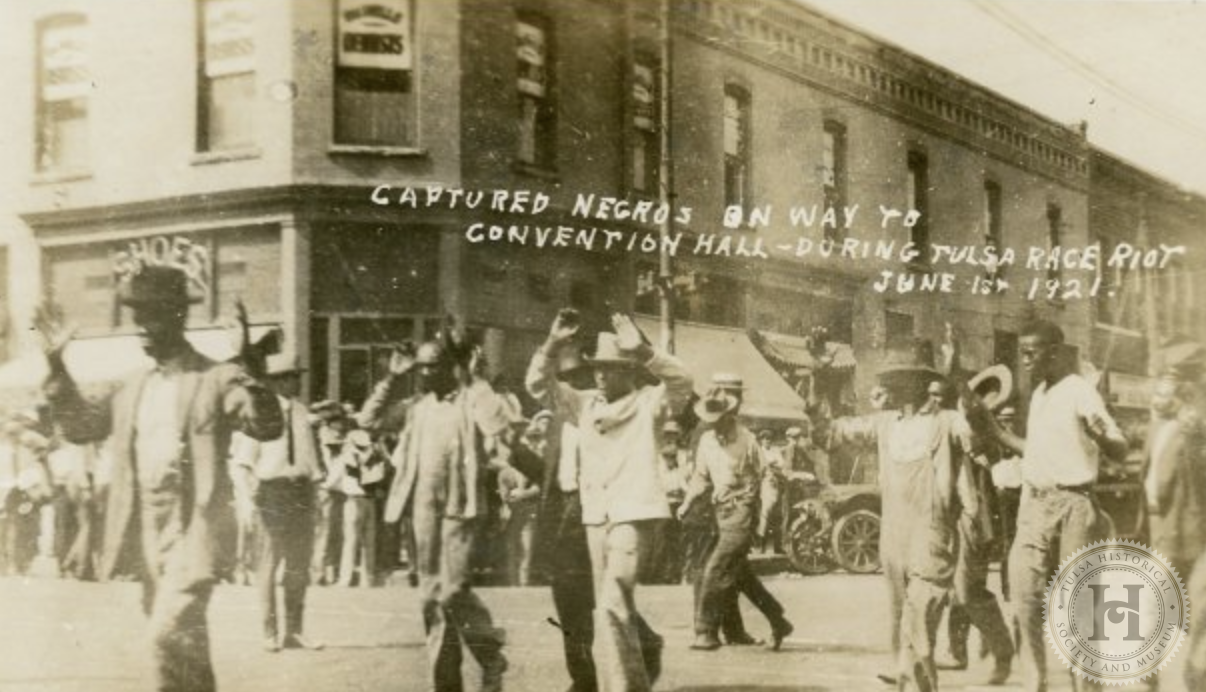 A street in Tulsa with smoke in the distance after the riot. 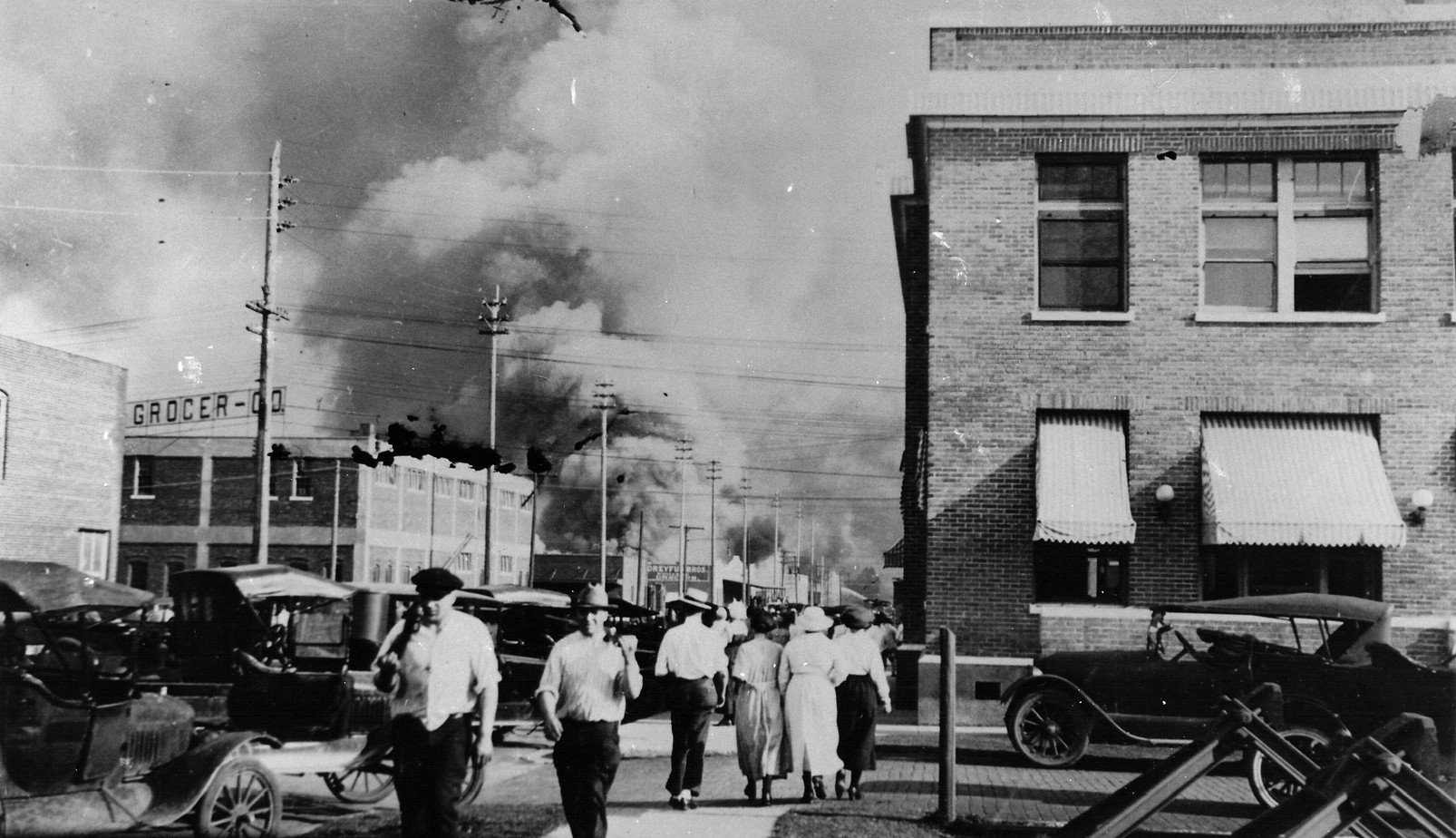 On May 31, 1921, Dick Rowland, a Black man, entered an elevator in an office building operated by Sarah Page, a white woman. He was heading to the top floor to access the only public bathroom available to Black men and women during these years of racial segregation. Mass panic developed after reports said that Rowland assaulted Page in the elevator and that a hanging was planned for that night, despite the fact that he was held safely in prison awaiting trial. Both Blacks and Whites surrounded the Tulsa Courthouse and two days of killing, looting, and burning ensued in the Greenwood District of Tulsa, Oklahoma. This neighborhood of Tulsa was commonly known as Black Wall Street because it had a prominent concentration of African-American business and was particularly affluent until this massacre occurred. Given this social context, the rioting culminated in an estimated 300 Black residents being killed and over 1.4 million dollars in claims were made on insurance policies (most being rejected due to riot exclusion clauses). 184 Blacks and 48 white were in care in local hospitals, and 531 were given first aid at Red Cross stations. Not only did the rioting occur around the courthouse, but also the entire so-called “negro quarter” when the white mob drove the fighting there to systematically wipe the infrastructure out.

Immediately, the Red Cross was designated as the official relief agency by the mayor. They placed hundreds of tents to accommodate the refugees who lost their homes and efforts were taken to reduce epidemics due to unsanitary conditions. Many first aid stations were created around the city and equipped by Red Cross nurses. Order was eventually restored and Martial Law was proclaimed on June 1st. Many of the victims were buried in mass graves around the city and many bodies were allegedly thrown into the shafts of a coal mine, where a Sears parking lot now stands. The National Association for the Advancement of Colored People established a relief and defense fund to aid the victims of the riot after refugees came to the NAACP office in New York City asking for contributions. News spread to the rest of the country, reporting that “the entire colored residence section of Tulsa was in flames, that shooting was going on and that motor cars and airplanes were being used by white people in the battle” (The Crisis). These refugees explained the story of what actually happened, and more importantly, the context of what lead up the disaster. They said “warnings had been distributed weeks and months before the riot, telling colored people they would have to leave Oklahoma before June 1, or suffer the consequences” (The Crisis). This explanation was sent to the most prominent newspapers in the country to get the war out and to further raise money for the relief fund.

In addition to the help and relief coming in from across the country and the NAACP, a committee of business men were chosen to rebuild the portion of the city that was destroyed. The story and legacy of the Tulsa Race Riots were quickly erased from white Tulsans’ memory. Oklahoma history books omitted or misrepresented the facts and causes of the riots despite its relevance to the racial divide in America. In 1997, The Tulsa Riot Commission to Study the Events of the Riot (TRC) was formed by the Oklahoma state legislature and issued a report in 2001 calling for tangible reparations to the historic Black Greenwood community. They recommended five specific tasks including direct payments to survivors and their descendants, the creation of an economic enterprise zone in Greenwood, a scholarship fund, and a memorial. This resulted in the state passing the 1921 Tulsa Race Riot Reconciliation Act, fulfilling all of these recommendations except for payments to survivors and their descendants. The memorial was erected outside the Greenwood Cultural Center on the outskirts of downtown Tulsa.

Today, the Tulsa Race Riots are still not commonly discussed in Oklahoma classrooms nor in common dialogues. Many students at the University of Oklahoma have reported that they had never even heard of this incident until beginning their college classes, even after living in Oklahoma their entire life. However, efforts are being taken to remake Black Wall Street and remember the disastrous events that happened in June of 1921. Black leaders in Tulsa want to bring 100 businesses back to this part of Tulsa by 2021, marking the riot’s 100th anniversary under the NorthTulsa100 initiative.

The citizens of Tulsa and African American rights activists everywhere hope to see more respect and memory paid to the survivors and descendants of this horrific incident. Although it is nearly 100 years later, the significance of this events is slowly but surely being remembered and openly discussed in the dialogues of Oklahoma history.