This is marker #9 in a series of obelisks erected in 1910 by the Jefferson County Camp, United Confederate Veterans to mark locations of engagements and other significant Civil War events in Jefferson County. This obelisk is located near Duffield's Depot where Colonel John S. Mosby conducted a raid in June 1864 to disrupt the railroad and communication lines between Harpers Ferry and Martinsburg. The UCV 1911 pamphlet also includes an additional 1863 skirmish that occurred about a mile east of this location. 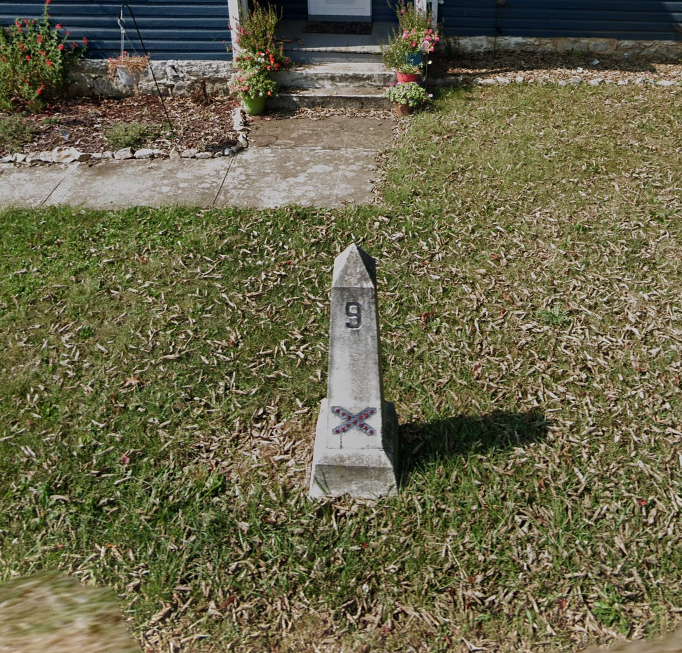 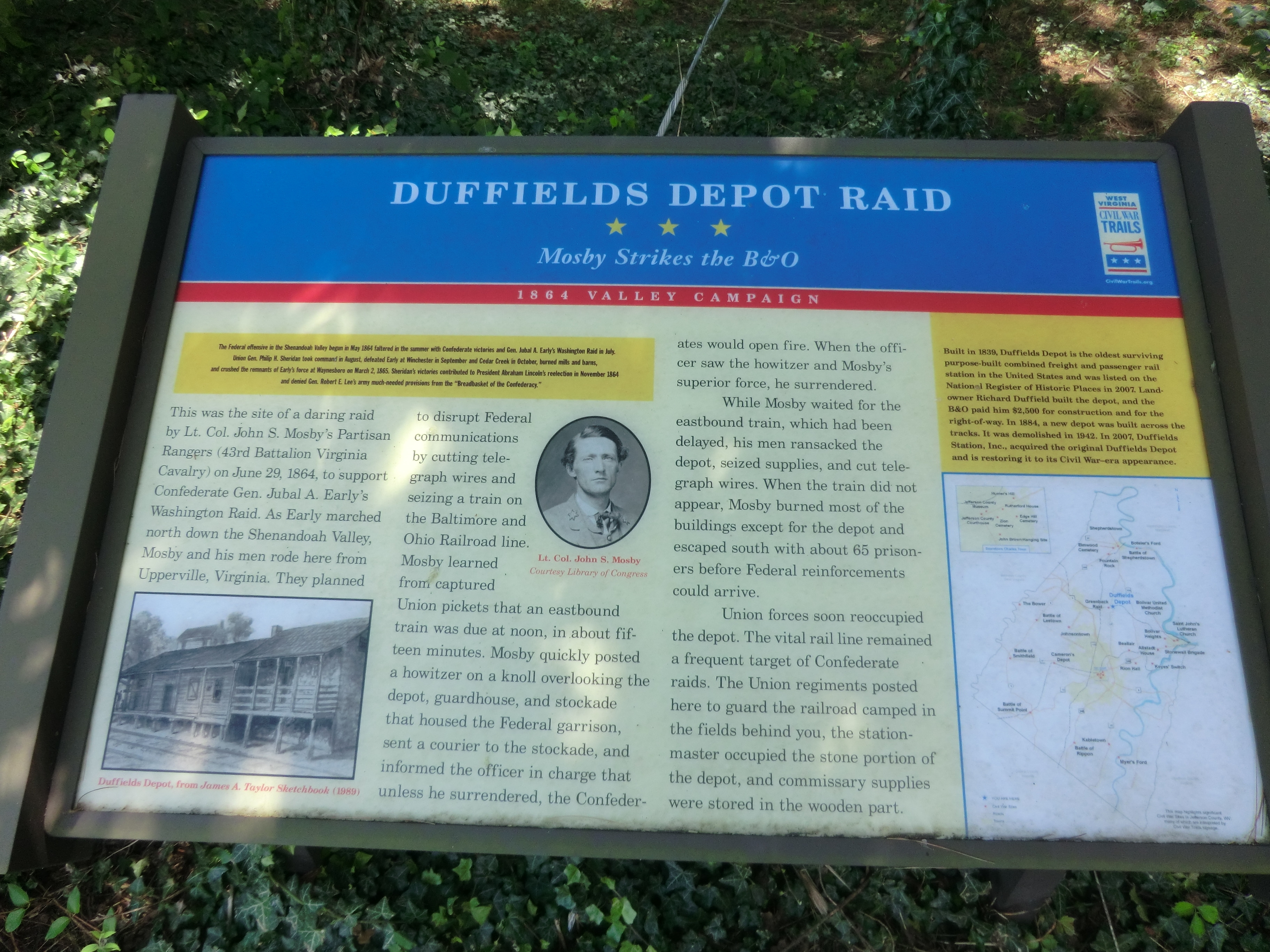 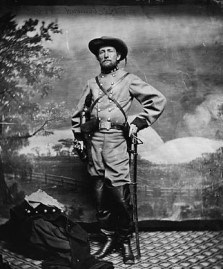 Colonel Mosby (center) and his rangers (Library of Congress) 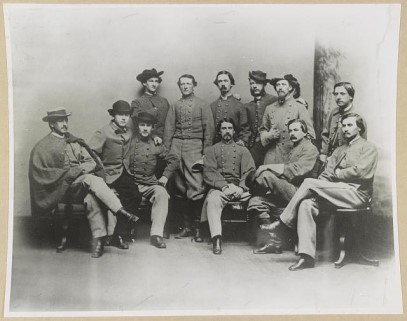 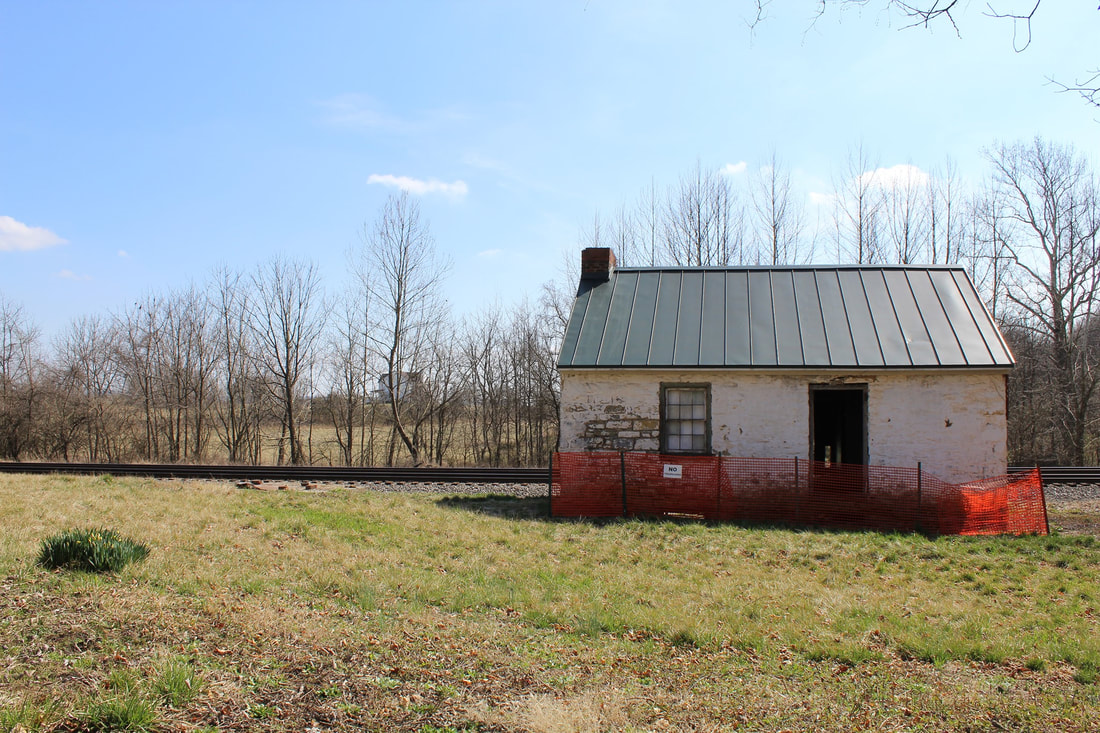 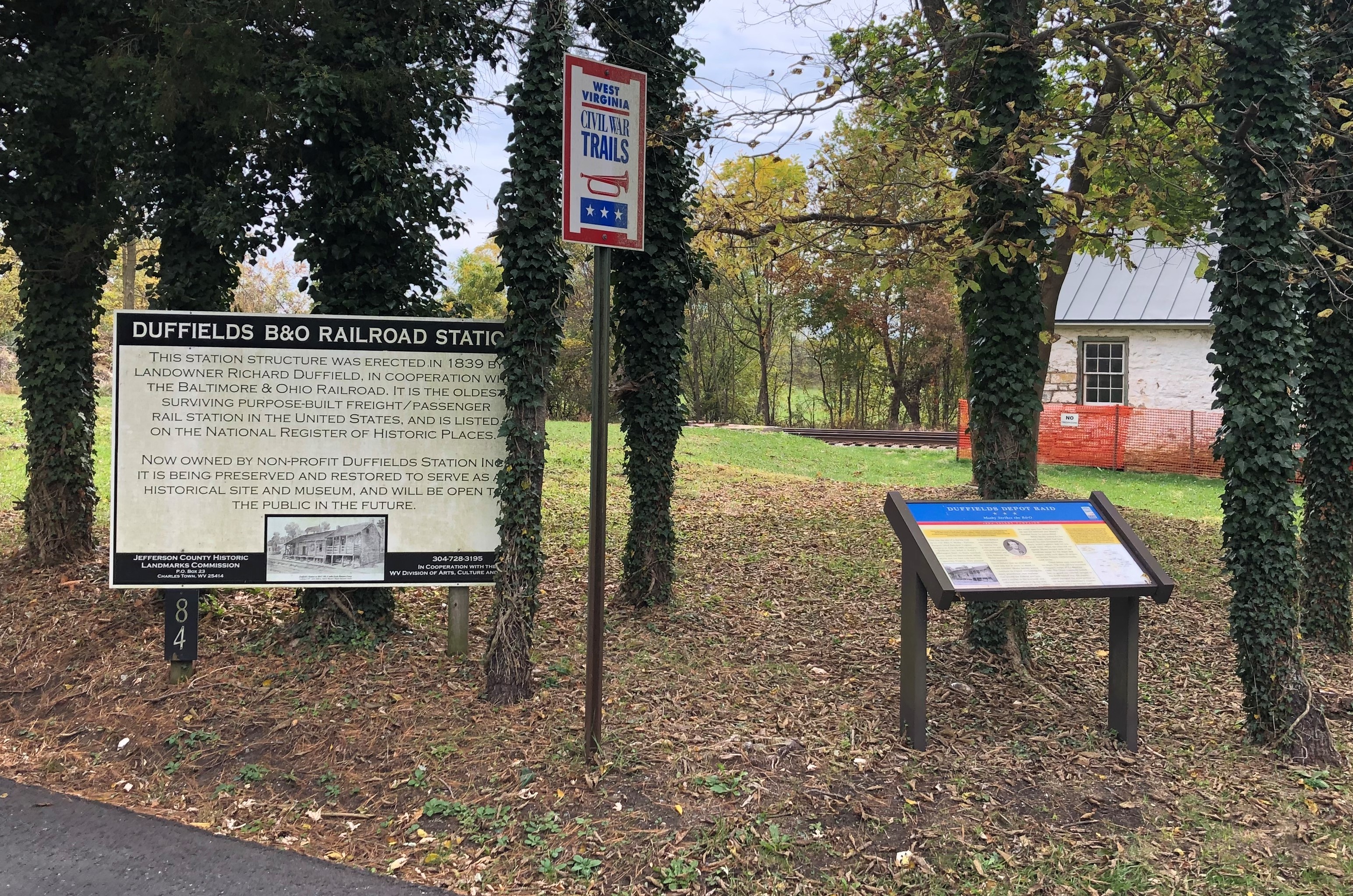 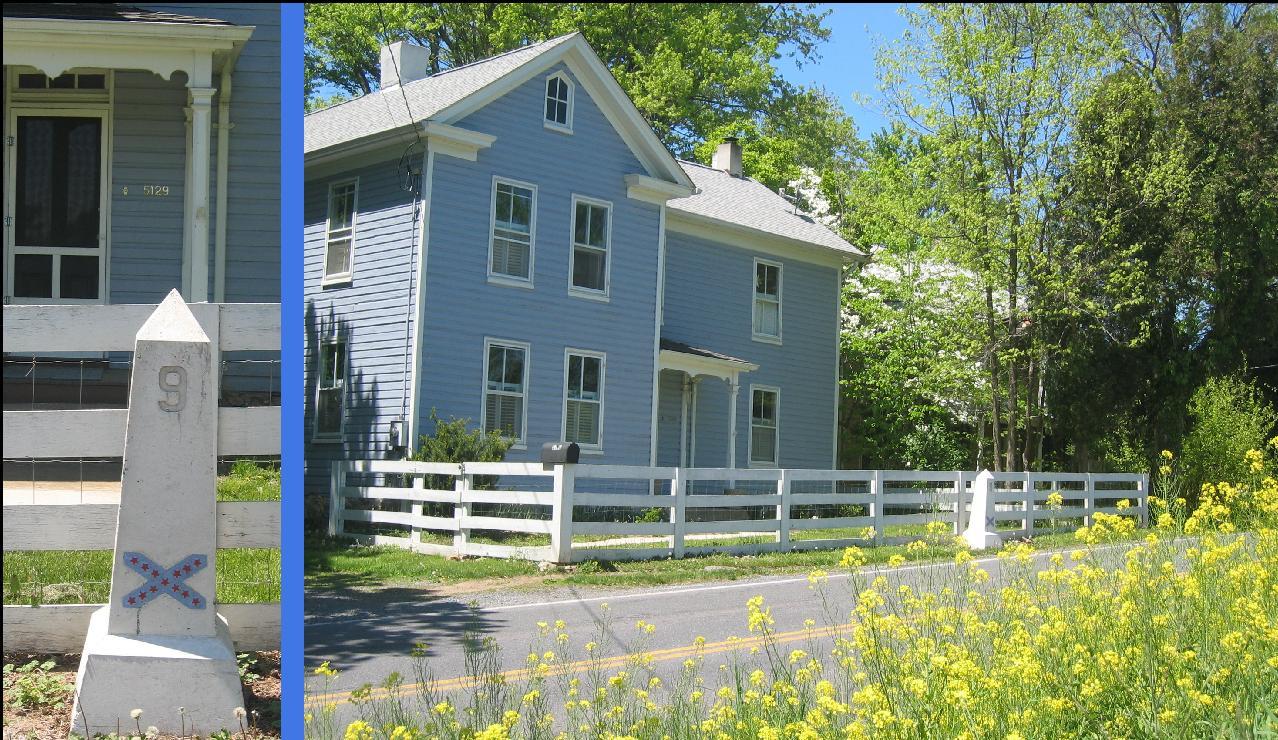 Railroad and communication lines were frequent targets during the Civil War. In Jefferson County, the Baltimore & Ohio Railroad was the focus of constant attention for both Union and Confederate forces. On June 29, 1864 John S. Mosby’s Rangers attacked Duffield’s Station intending to disrupt the rail & communication lines and possibly capture a train running between Harpers Ferry and Martinsburg. Mosby’s force, reportedly around 500-800 strong with infantry, cavalry, and 2-4 artillery pieces, attacked the station around 1:00pm. The Union force was quickly overwhelmed, and Mosby captured 50-65 prisoners, likely from the 1st Maryland Potomac Home Brigade. Fortunately for the Union, the train was running off schedule and was not captured by the raiders (the train coming from Martinsburg stopped short of Duffield’s and was able to back to safety). Mosby’s men succeeded in cutting the telegraph lines, cutting communication between Martinsburg and Harpers Ferry, around 2:00. They also took supplies from storehouses and burned several buildings but did not damage the railroad tracks. Since no trains had come through the station, Mosby then moved his troops back towards the Shenandoah Valley.

Yesterday at 1 p. m. the enemy, 500 cavalry, with two guns, broke through our lines at Charlestown. After a skirmish with our cavalry attacked a company of infantry at Duffield’s Station, capturing about 25 men. They destroyed a storehouse and the telegraph wires, but did not damage the railroad, as our troops moved promptly against them from Martinsburg, Smithfield, and Harper’s Ferry. The enemy escaped across the Shenandoah into Loudon County by Berry’s Ferry."

Sir: I have the honor to report that on the morning of the 29th instant I received reliable information to the effect that Mosby with a considerable force was in the vicinity of Charlestown, W. Va., and reported the fact by telegraph to division headquarters at 10.30 a. m. Between 1 and 2 p. m. the wires between this post and Martinsburg were cut and communication ceased. About 3 o’clock an attack was made upon my picket-line towards Charlestown, and during the afternoon there was heavy skirmishing along my whole line of pickets on that front. Late in the day a report was received from the commandant of the forces at Duffield’s Station that he was attacked by superior numbers of the enemy at that point and calling for re-enforcements. I at once sent 50 cavalry towards Duffield’s to feel the enemy and watch their movements, and 300 infantry were ordered to that point. Subsequently information was received that the enemy had routed our men; had plundered and burned the camp, stores, and store-houses at Duffield’s; had retired without doing further damage, and moved in the direction of Key’s Ford, intending to cross there. I sent the 300 infantry at once to Key’s Ford, where they remained until 7 this a. m., when they returned without seeing anything of the enemy. Our loss as nearly as can be now ascertained is 38 in killed, wounded, and missing. The force of the enemy was not far from 400 men, with two pieces of artillery. From all the reports received it appears that the force at Duffield’s had not even a picket out, were surprised, and consequently retired with hardly a show of resistance. The matter will be carefully investigated. Allow me once more to express the opinion that a permanent force of good cavalry are necessary at this point, as the enemy are constantly crossing and recrossing near here, and from Harper’s Ferry cavalry can act with promptness and effect.

I have the honor to be your obedient servant,

“A few days afterwards we took Duffield's Depot, on the Baltimore and Ohio Railroad; secured about 50 prisoners, including 2 lieutenants and a large number of stores. The train had passed a few minutes before we reached the place. On my way there I had left Lieutenant Nelson, commanding Company A, at Charles Town, for the purpose of intercepting and notifying me of any approach in my rear from Harper's Ferry. As I had anticipated, a body of cavalry, largely superior in numbers to his force, moved out from that point. Lieutenant Nelson gallantly charged and routed them, killing and wounding several and taking 19 prisoners and 27 horses. We sustained no loss on this expedition.”

Duffields, on the B. & O. R. R., where Marker No. 9 is located, was always occupied by the Federals when they had possession of the lower valley, thus guarding the railroad, one of the principal feeders of the army of the Potomac. They also picketed the roads to guard against raids of the Confederates. There were times when the railroad was guarded from Harpers Ferry to the North Mountain, in hailing distance of each other, and yet Confederates would pass through frequently. One favorite crossing was about one and one-half miles east of Duffields. Kephart and Melvin’s woods was on either side of the railroad, on elevated ground, and the guard could be flanked unobserved.

In July, 1864, Colonel Mosby surprised and captured the whole force at this place (Duffields), numbering about 100 men. On July 25th, 1864, George Cook of Company D, Twelfth Virginia Cavalry, was mortally wounded about one mile east of Duffields, and died the following day.

A sharp encounter occurred on Melvin’s Hill, about one and one quarter miles east of Duffields, between three rebs and three yanks, in July ’63. The three rebs had been sent to establish a picket post on Engle’s Hill, not knowing that the Federals were advancing. After crossing the Halltown and Shepherdstown road, a citizen informed them that the Federals were advancing, and that a company had just passed. The Confederates wheeled about to investigate. The Federal company had sent three scouts up the road towards Duffields, and the Confederates, being informed of that fact, prepared for it. The yanks saw the rebs coming, raised their carbines, and waited until the rebs were within seventy-five yards, and fired, but missed. Both sides used their revolvers. The rebs drove the yanks back to the stone house, killing one, wounding one, and liberating one prisoner they had captured. In the melee, a horse of one of the rebs fell, and disabled its rider.

The Federal cavalry, hearing the firing, wheeled and come back at full tilt. Reb No. 2, getting too close with an empty revolver, was taken in. Reb No. 3, with two loads in his second revolver, could not shoot, for fear of killing his comrade; and the company, almost on him, he gave the spur to his horse, jumped the cap fence, and reported to his company.