This is marker #8 in a series of obelisks erected in 1910 by the Jefferson County Camp, United Confederate Veterans to mark locations of engagements and other significant Civil War events in Jefferson County. This obelisk marks the location of an action between Company “D,” 12th Virginia Cavalry and Union soldiers that were a part of Gen. Humphrey’s force on October 16 or 17, 1862. Company “D” was on picket duty near Duffields when it engaged the advance of Gen. Humphrey’s troops. Company “D” succeeded in pushing the Union troops back to Lucas’ Woods near the location of Marker Number Eight. 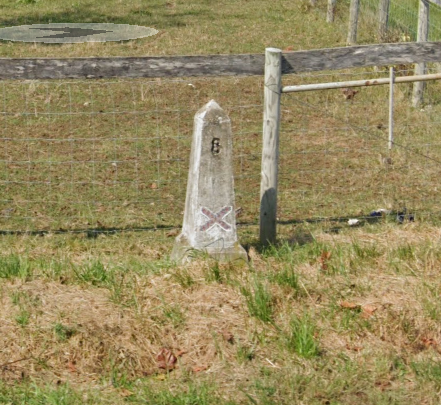 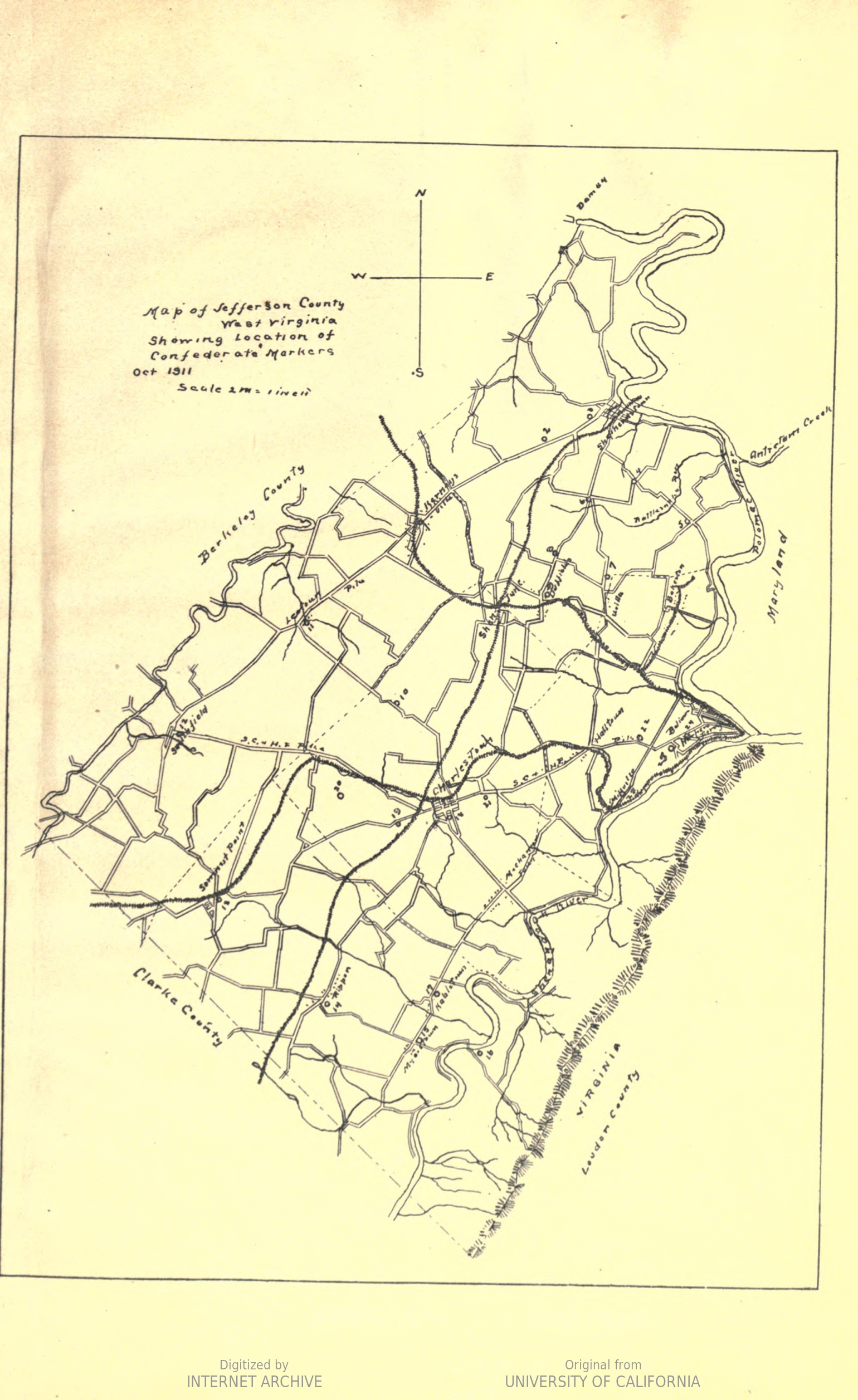 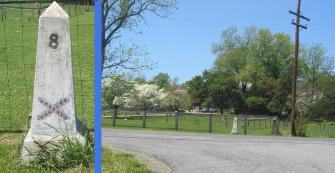 This engagement likely occurred on October 16, 1862, not October 17th as referred to in the Jefferson County Camp UCV pamphlet. During a reconnaissance offensive by Union troops under Brigadier Generals Andrew A. Humphreys and Winfield S. Hancock on October 16-17, 1862, Confederate pickets from the 12th Virginia Cavalry, Company D engaged with parts of the Federal advance close to their post near Duffields. Company D was on picket duty between Engle’s Hill and the Shepherdstown Road when the Federal advance partially cut them off from their comrades. The skirmish happened near the junction of the Uvilla and Charles Town roads near Rocky Lane. Company D, commanded by Captain John L. Knott, was largely made of men from Jefferson County and surrounding areas, so the men were able to evade the Federal forces and rejoin the rest of their regiment near Duffields.

In the aftermath of the Battle of Antietam, the armies of McClellan and Lee spent a few weeks resting in camp. The Army of the Potomac (McClellan) remained on the battlefield near Sharpsburg, MD while Lee’s Army of Northern Virginia took up camp near Bunker Hill, VA (WV). In mid-October, McClellan moved his army towards Harpers Ferry with the object to retake the town from the Confederate forces there. To screen the movements of the main Union army, forces under Brigadier General Andrew A. Humphreys and Brigadier General Winfield S. Hancock crossed the Potomac River and advanced towards Kearneysville and Harpers Ferry/Charles Town respectively.

Brigadier General Humphreys crossed the Potomac at Butler’s Ford near Shepherdstown on October 16th with 6,000 infantry of the Fifth Corps, 500 cavalry, and 6 pieces of artillery. A few miles past Shepherdstown Humphreys’ forces met resistance from Confederate forces under Major General J.E.B. Stuart. Stuart’s men had been destroying part of the Baltimore & Ohio Railroad at Thompson’s Stephenson’s Station about six miles from Smithfield (now Middleway). In the late evening of the 16th there was an engagement between these two forces and after about 15 minutes of fighting the Confederate force retreated. The following morning, October 17, Humphreys continued his march towards Leetown and met more resistance just outside of Kearneysville. After a small engagement near Kearneysville, the Federal troops started to retreat back towards Shepherdstown and their camp at Sharpsburg. According to Confederate accounts, the Confederate resistance forced the Union troops to fall back and retreat across the Potomac to safety. According to Humphreys’ report of October 19, 1862 he received directions that the objective of their offensive was complete and both his force and that under Hancock would withdraw simultaneously. In the evening of October 17 Humphreys’ forces recrossed the Potomac towards their original camp at Sharpsburg.

The other force of this action, that under Brigadier General Hancock, also crossed the Potomac on October 16th. Hancock’s brigade, plus 1,500 additional infantry, 4 regiments of cavalry, and 4 artillery guns crossed near Harpers Ferry and headed towards Charles Town. The Union force advanced so quickly, they were able to break through the Confederate pickets between North Mountain and the Shenandoah River. During the advance, Hancock’s force met resistance from Confederate pickets at Halltown but pushed them back to about 1 mile outside Charles Town. The Confederates—infantry under Lieutenant John W. Carter and guns of R. P. Chew’s battery and the Richmond Howitzers—put up resistance on high ground outside Charles Town. Hancock’s Union troops were able push the Confederate troops back into Charles Town and ultimately forced them to evacuate the city. Union forces remained in Charles Town overnight and then returned to Harpers Ferry on October 17.

After this action of October 16-17, 1862, McClellan’s army retook Harpers Ferry and engaged in expeditions against Confederate forces and guerillas before the Army of the Potomac moved back into easter Virginia before the Battle of Fredericksburg.

"Markers One, Six, and Eight

On the Sixteenth of October, 1862, Brigadier General Humphreys crossed the Potomac at Butler’s Ford, with Six Thousand Infantry, Five Hundred Cavalry, and Six pieces of artillery, and advanced on the roads leading to Kearneysville. Another force, commanded by Brigadier General W. S. Hancock, with his own brigade, fifteen hundred from other brigades, four regiments of cavalry, and four pieces of artillery, advanced from Harpers Ferry at the same time, in the direction of Charles Town. We had, at the time, a line of pickets extending from the North Mountain to the Shenandoah River. The advance was so sudden that it cut off some of the pickets.

Company D, of the Twelfth Virginia Cavalry, was picketing from Engle’s Hill to the Shepherdstown road. The reserve was near where Marker No. 8 stands, at the intersection of the Uvilla and Charles Town roads. A sharp encounter took places between the Federal advance and company D, a little south of this point in Rocky Lane. Captain Knott was wounded in the shoulder. Many of the company were from this section, and knew every road. They easily made their way through the enemy’s lines and joined the Regiment. Thus they played even; for about a month previous, our line of pickets were being advanced, and company D struck their pickets at Duffields, and chased them back on their company reserve at Marker 8. They held their own until the company had closed up, when a charge was made and they were driven to Lucas’ woods, where a regiment was stationed. They all decamped and crossed the Potomac.

Humphrey’s advance guard went as far as Smithfield, and his main body a little south of Kearneysville. The Confederates had been destroying the railroad in this section, and some of General Winder’s Infantry was near. They, with Fitz Lee and Hampton’s Brigades of Cavalry, commanded by General Stuart, attacked late in the evening of the Sixteenth of October, (Marker No. 1), and, after some severe fighting, drove him from his position. They were steadily driven back on the Seventeenth, but made a determined stand two miles south of Shepherdstown, on the Shepherdstown and Duffields road at what is called the Forks. A brigade of regulars, commanded by Major Lovell, U.S.A. occupied this part of the field, and the importance of holding it was apparent. Back of him was the Trough road which led to the ford on the Potomac and also the road leading to Shepherdstown. If the position were carried his retreat was endangered. Trees were felled across the road to impede the artillery and cavalry, but Winder’s infantry forced them back slowly, and the whole force crossed into Maryland.

The losses on both sides were considerable. No estimate of the losses could be found. Our badly wounded were taken to the Uvilla churches and neighboring farm houses, and cared for. Many wounded had been left at these churches after the battle of Sharpsburg, and those unable to get away were paroled by the Federals. At this point is planted Marker No. 6."