St. Rita of Cascia Parish is the first church created by the Order of St. Augustine in the Midwest. The Augustinians, or Austin Friars, are a Catholic order of priests with its roots in Italy. When the request was made to them by the Bishop Carroll of Baltimore (as a representative of the Archbishop of Dublin) to begin a branch of the Austins Friars in the United States, the Augustinians were more than willing to spread their message to a new nation. St. Rita is now known for is activism and as of March 2019, the Pastoral Migratoria has helped 101 residents become U.S. citizens.

Street view of St. Rita of Cascia Parish as it looks today 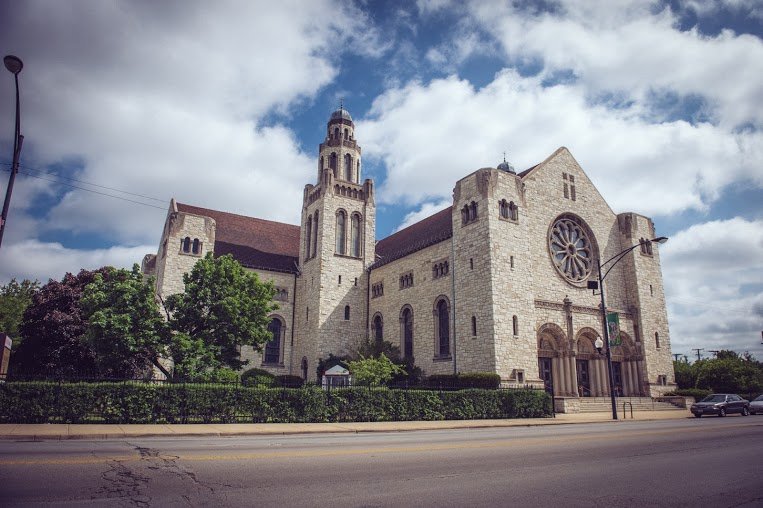 The interior of St. Rita when entering through the front 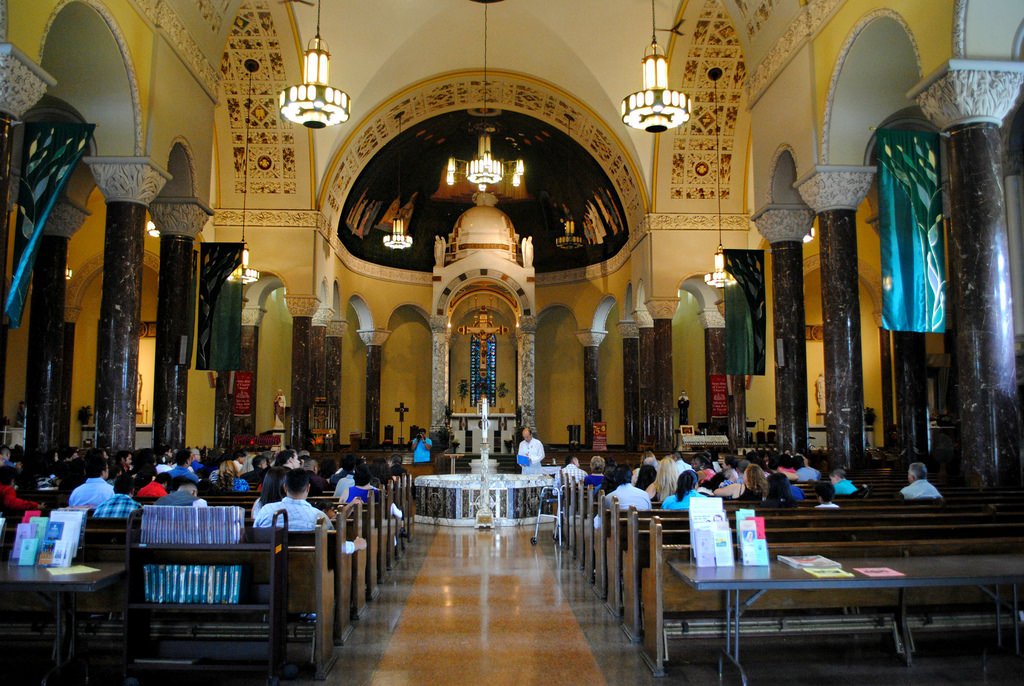 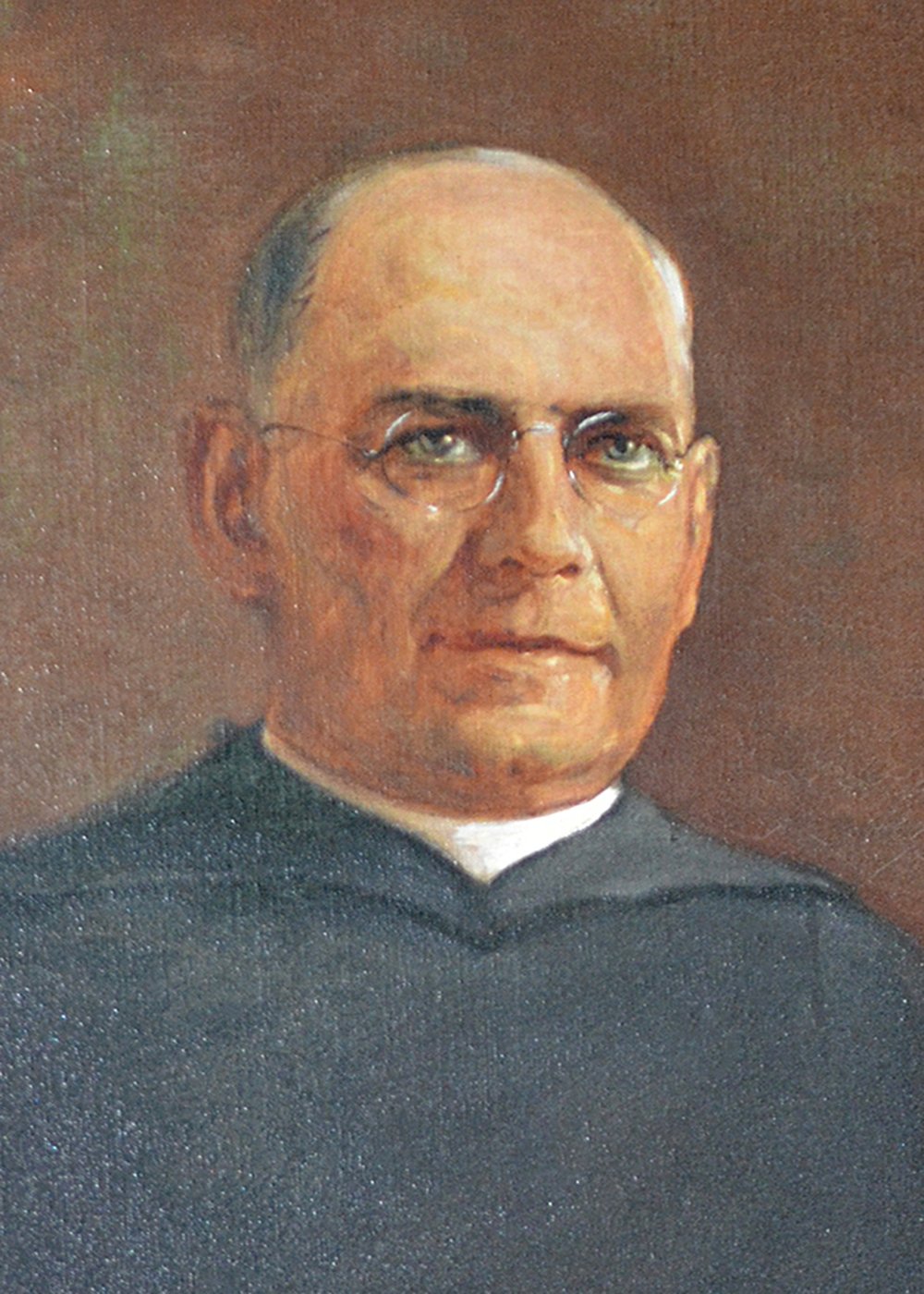 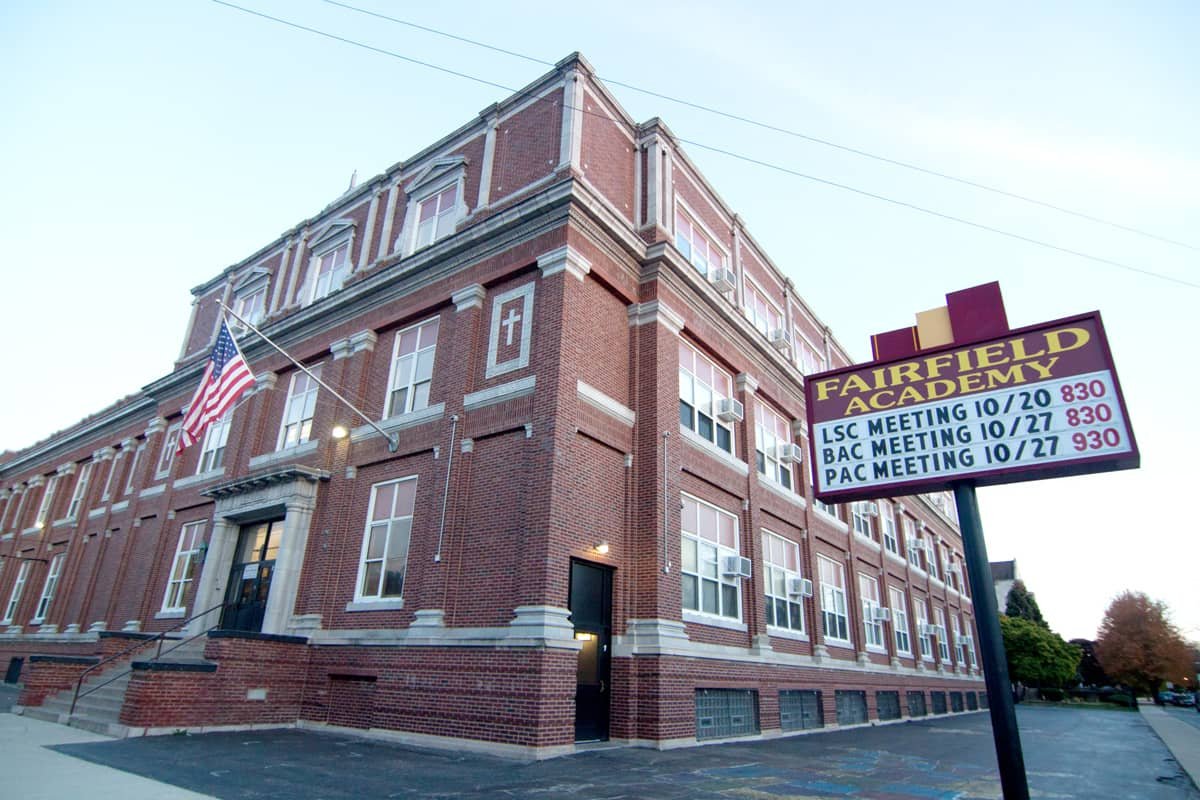 St. Rita of Cascia Parish during its construction and later its completion in the 1940s.

St. Rita's balcony where an organ is placed and the location of the ghost sighting. 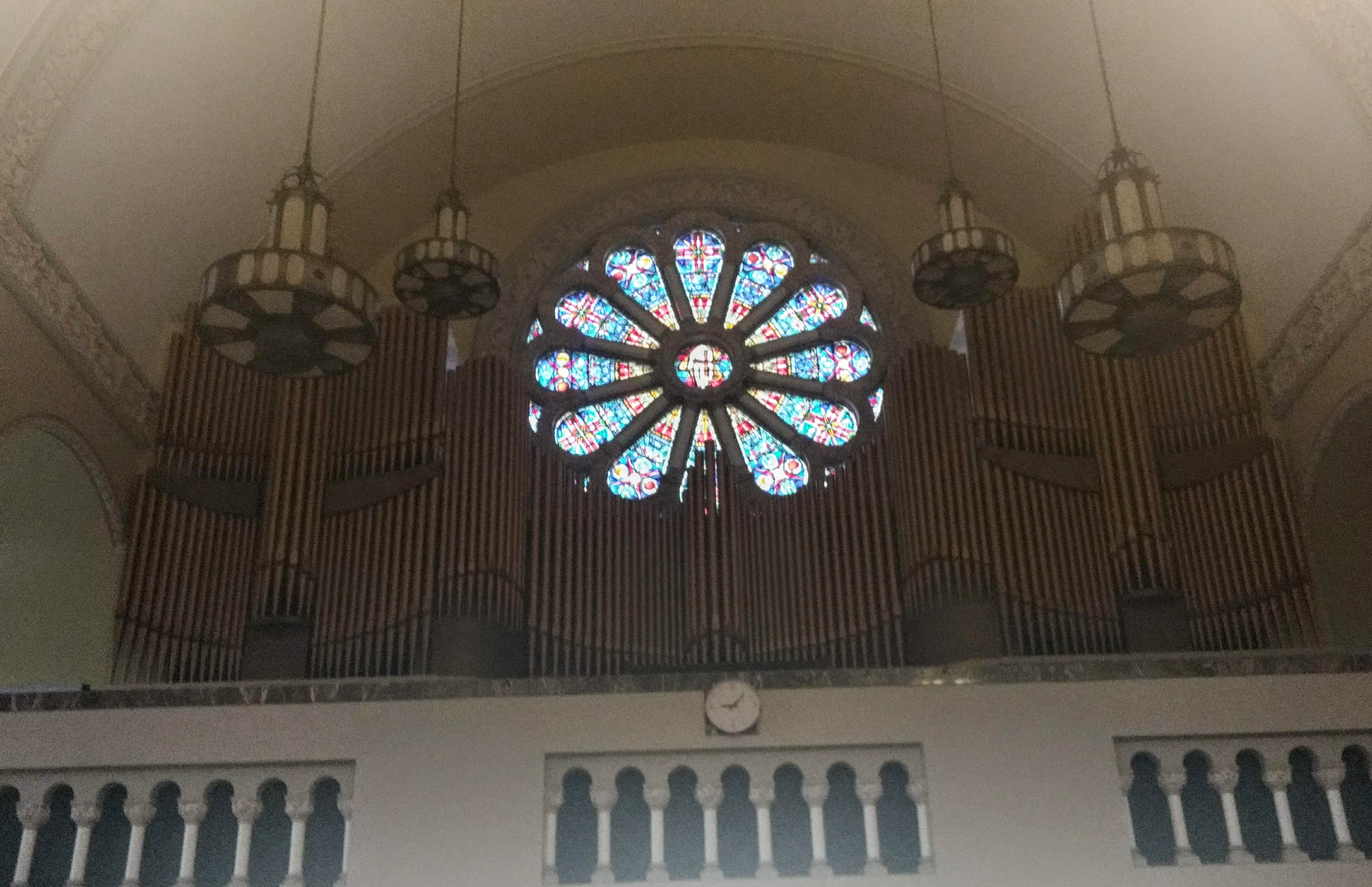 St. Toribio Romo Award, given to St. Rita's Pastoral Migratoria on April 9, 2018, for its contribution to the immigrant community. 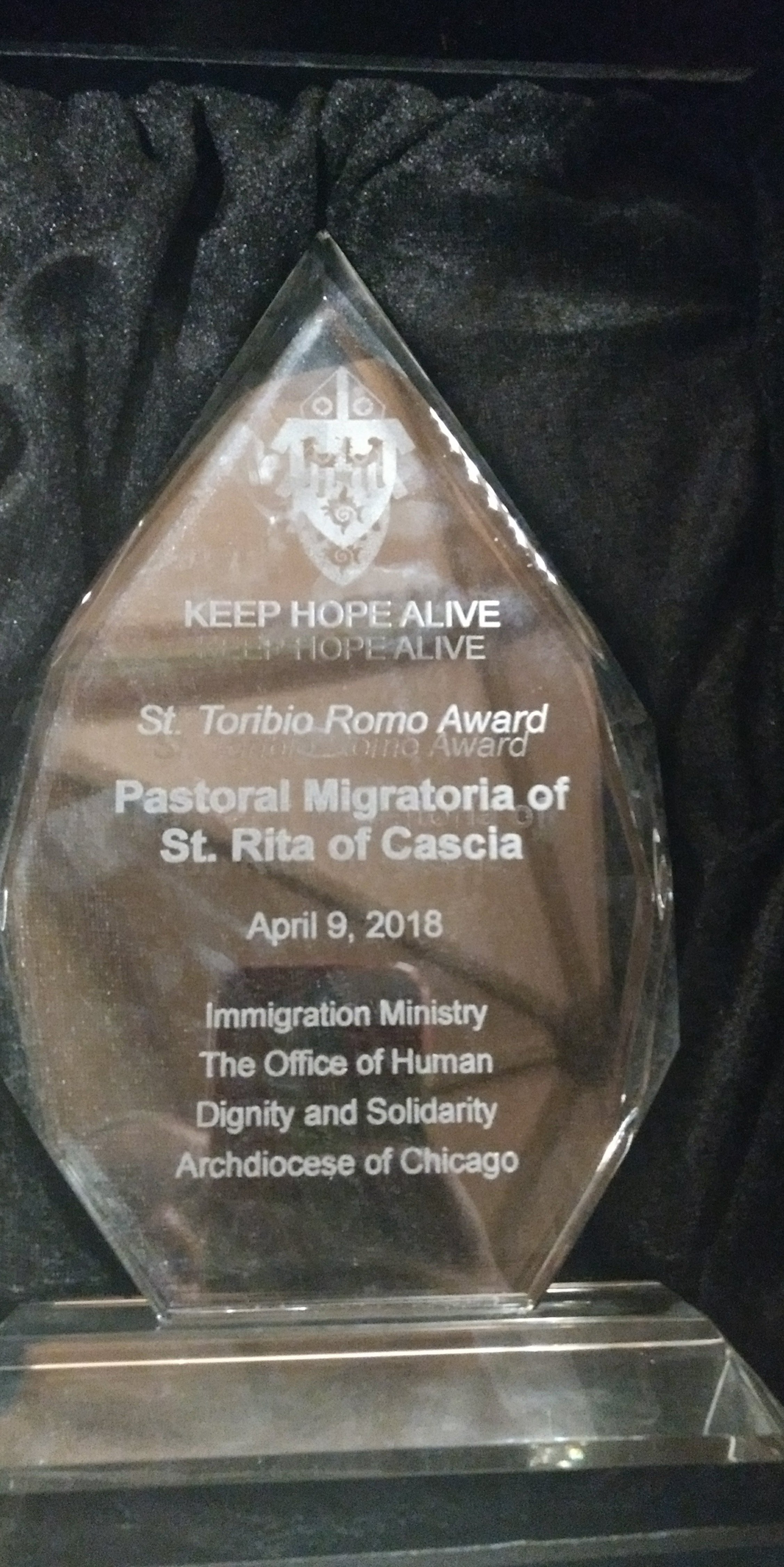 The Order of St. Augustine in the Midwest:

Responding to orders from the Bishop Carroll of Baltimore (at the request of the Archbishop of Dublin) to send priests to the new nation, Father John Rosseter left Ireland in 1794 to begin his missionary work in the United States[1].  On August 27, 1796, a branch of the Augustine Order was created in Philadelphia, which would later become the center of activity for Augustinians in the United States. From there the Order continued to expand in the east, establishing branches from New York to Maryland. It was in June 1905 that the Archbishop of Chicago, James Edward Quigley, invited the Augustinian Order to create of a branch in Chicago.

On May 20, 1905, the Archbishop of Chicago and Father Martin Geraghty, Prior Provincial, signed the paperwork that officially established the Augustinian Order in the Midwest[2]. On June 24 of that same year, Father James F. Green arrived to oversee the creation of St. Rita’s first building. It was on a five-acre piece of land, located on 63rd and Oakley, that a monastery, chapel, and boys’ college were to be built. On April 22, 1906, St. Rita College was completed and accepting students for the start of the school term that same year. The school would later be moved to 7740 S Western Avenue and turned from a boys’ college to an all-boys high school.

As St. Rita finished the construction of the rest of its buildings the remainder of the area saw an increase in its population. But this increase in population meant one big problem could no longer be overlooked, the area needed proper sewage systems. The areas of Kedzie to Western Avenues and 56th to 62nd Streets (later known as Marquette Manor) were under the control of one owner, Hetty Green. Ms. Green would not install sewage systems on the property or sell to someone who would. In 1908, Father Green would take this issue to court and win the case. He along with other community members would see that proper sewage systems were installed throughout the area. A part of this expansion would become the place where St. Rita of Cascia Parish stands today.

With the community increasing at an unmanageable rate, thanks in part to the sewage systems now in place, the three original buildings were no longer enough to contain the new residents. Therefore, in 1911 another five-acre land was purchased on 63rd & Fairfield and 62nd & Washtenaw, a section of Marquette Manor. The building that would become St. Rita Grammar School was erected here (though for the first few years of its creation it would serve as a school and church). In 1916, the school opened its doors to welcome 235 children and by 1926 the school housed 1,400 children. When the community once again grew, the decision was made to move the church to another location and dedicate the whole building to the school. A new floor was also added to the existing building to accommodate all the new students. The building still stands today and is still a grammar school known as Fairfield Academy. While the school remains property of St. Rita Parish it is rented out to the Chicago Public Schools for use.

St. Rita’s first church was located on 63rd and Oakley, where it not only served as the church but as a high school and monastery. Construction began in 1905 and the church was finally opened in 1906. The building would continue to serve its purpose until the 1910s, where the community grew too big for the building to continue being a church/monastery/school. Therefore, a new section of land was purchased on 62nd and Washtenaw where St. Rita’s second church was placed. The structure was built with the intention to be both a school and a church. It was only when the community once again grew too big for the existing church to handle that it was decided to build a new structure that would only house the church. By December 1923, the new church was created and open for use. This third church was erected on 63rd and Washtenaw.

Yet by the 1940s the community was again too big for the church to hold all of its members. The choice was made not to buy new land but build a bigger church around the existing one. It was on January 28, 1948, that construction of this new building began. On November 23, 1950 construction was finally finished and Cardinal Stritch was the one to preside over the Mass of Dedication. Fr. Green, St. Rita’s first pastor, was not able to witness this occasion, having passed away in 1936, but his successor Father Patrick H. Kehoe was the one to oversee the new church’s creation.

St. Rita of Cascia Parish continues to be a home of worship for the Catholics that live in the area. When the first church was built the main ethnic group in the community was the English. By the creation of the third church in the 1940s, the main ethnic group was Polish and now the church caters mainly to Latinos. One of the church’s renown services is its citizenship classes. Beginning in 2015, the Pastoral Migratoria decided to start providing the community with naturalization classes for the many residents of the area. In 2018, the Archdiocese of Chicago recognized the outstanding achievements of this group and awarded them the St. Toribio Romo Award for its contribution to the immigrant community. As of March 2019, the Pastoral Migratoria has helped 101 residents become U.S. citizens.

It was a normal All Souls Day celebration and, a few parishioners were in the church praying for the departed when they heard music coming from the organ in the balcony. Since the organ can be reached by anyone walking upstairs, most of the parishioners thought it was the work of a child that grew bored with the mass. Yet, when the parishioners looked towards the balcony all they could see were the figures of six monks, three in white and three in Black, standing on either side of the organ. After a moment the figures came down the balcony towards the parishioners. This threw everyone into a panic and all the parishioners ran to the doors leading to Fairfield Avenue and tried to open them, but they would not budge. It was only after the monks were heard saying “Pray for me” that the doors could finally be opened. Father Clement C. McHale, prior of the parish at the time, is said to have told those parishioners to not mention this story to others[3]. But no one really listened, and the story was passed on and still told to this day.