What began in 1842 as the first powered sawmill west of the Mississippi River became a popular tourist destination in 1985 with the advent of the Santa Cruz, Big Trees & Pacific Railway, a narrow gauge steam railroad offering service from Roaring Camp in the Santa Cruz Mountains to the Santa Cruz Boardwalk. Replica frontier buildings offer glimpses into early life in California. In addition to a variety of steam trains and routes, including the steepest passenger train track in the United States, Roaring Camp hosts a wide slate of events year-round, including Civil War reenactments, concerts, blacksmithing workshops, and more.

The park's first locomotive, the "Dixiana Shay," named after its manufacturer (Shay) and town of origin (Dixiana, Indiana). This photograph was taken in 1966, only three years after the attraction opened (Santa Cruz Trains). 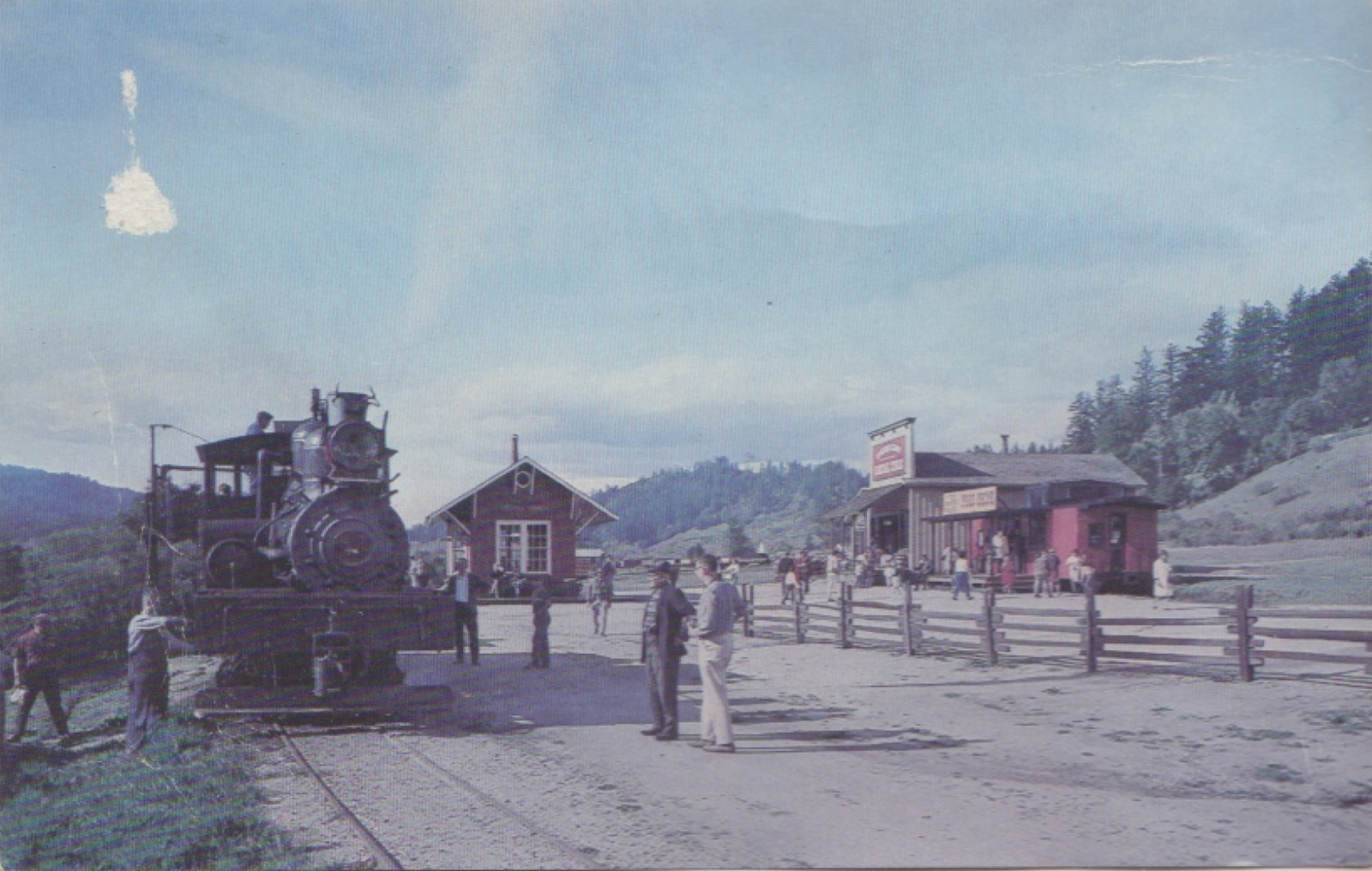 The present-day train winds through the redwoods on a wooden trestle. Norman Clark's route was complicated by wanting to cut down as few redwoods as possible (TripAdvisor). 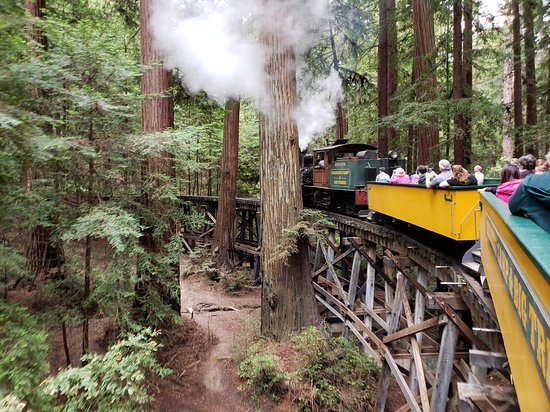 One of Roaring Camp's steam locomotives with the general store in background (RoaringCamp.com). 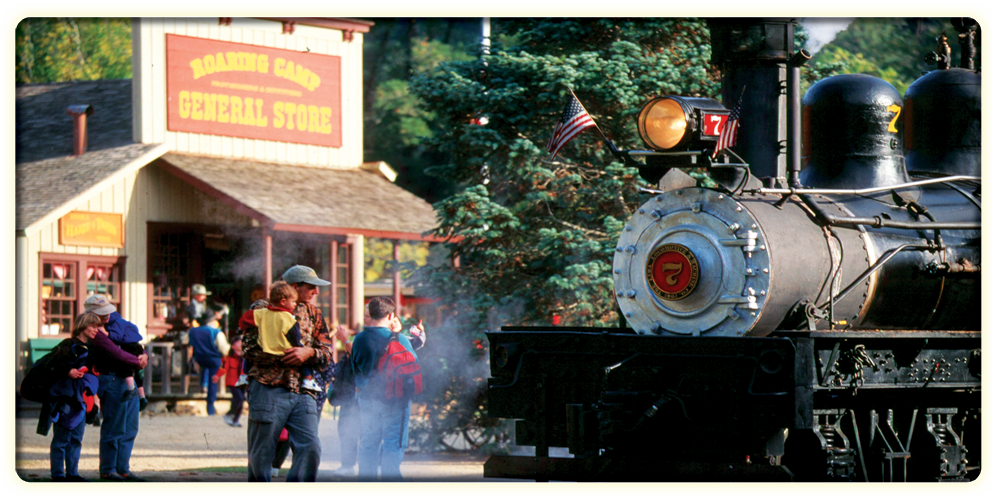 Annual Civil War reenactments are held on a large field at Roaring Camp as part of Memorial Day celebrations. 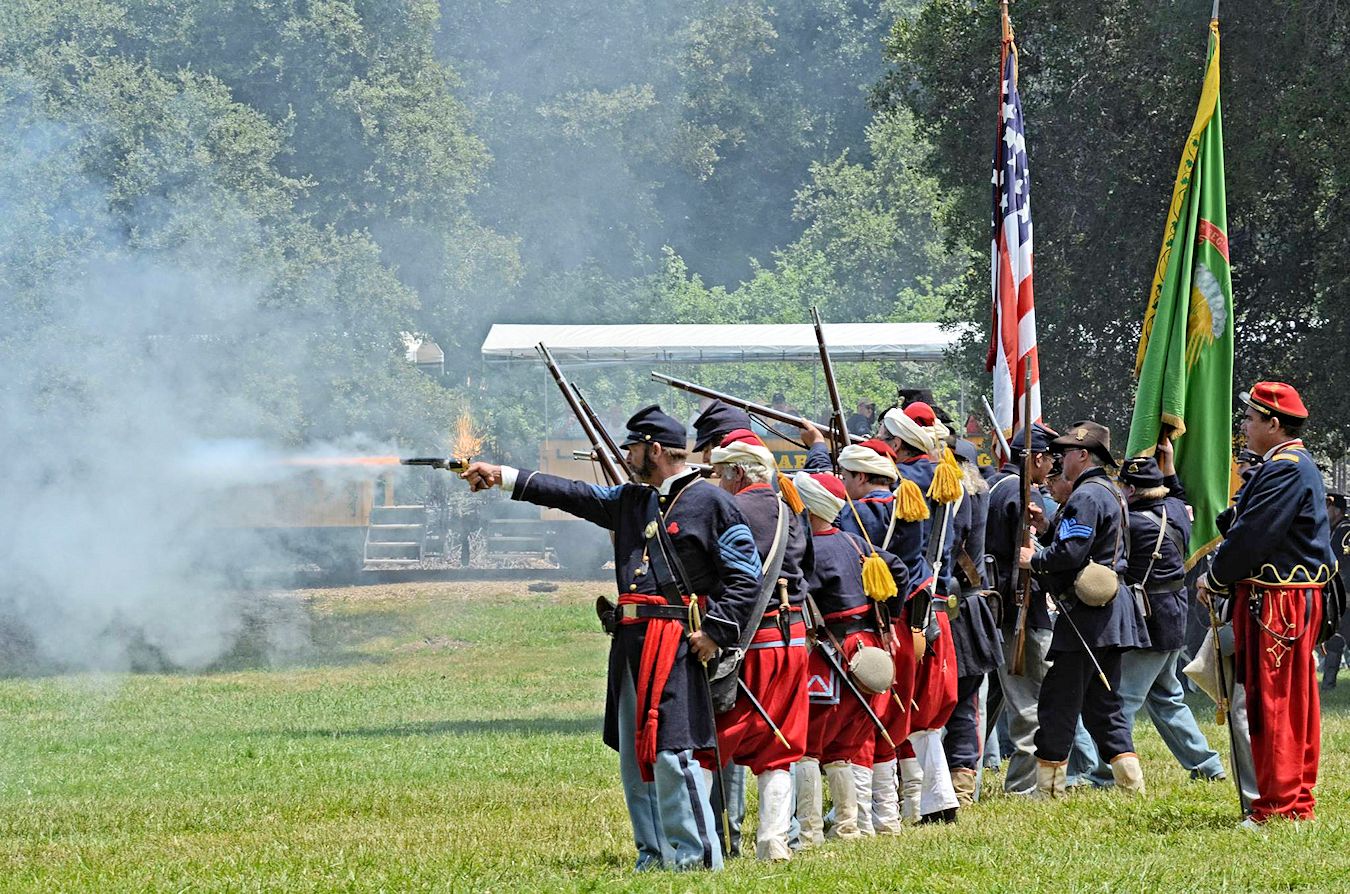 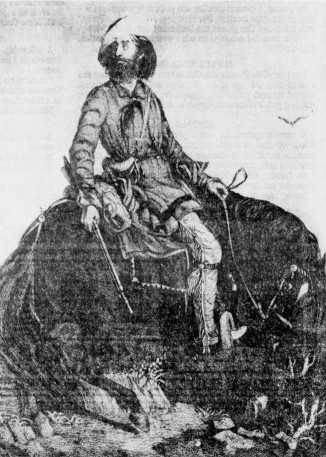 In 1832-1833, Roaring Camp’s founder Isaac Graham likely made his way to California with a group of hunters from Santa Fe, making him among the first wave of Americans to immigrate to the northernmost part of what was then Mexican territory. Early court records soon testify to the presence of the troublesome new immigrant, a tall, gruff Tennessean who levied a lawsuit against one John Price as early as 1833 in San Jose. A mere three years later, Graham organized a band of twenty to thirty American “Californios” to help powerful landowners Jose Castro and Juan Bautista Alvarado overthrow the appointed Mexican governor.

Though the coup was successful, California did not split off into its own sovereign state. Instead, Alvarado was confirmed in his new authority as governor by the Mexican government, and Graham’s repeated insistence on being compensated for his help soon soured the relationship with Alvarado. In 1840, when Alvarado made good on a promise to expel dangerous “foreigners” from Alta California, Graham was rounded up and arrested with several dozen other American and European immigrants. After time spent jailed in Monterey, where Graham had been maintaining a distillery since 1837, the foreigners were shipped to San Blas in Baja California in what became known in the United States as “the Graham Affair.”

After a few more weeks in prison, pardons were issued and reparations paid. The irascible Graham now had $30,000--not an inconsiderable fortune in 1840--and rather than return to his distillery (which may have been little more than a tule hut), Graham purchased Zayante Rancho in the Santa Cruz Mountains near present-day Felton, where he used the waters of Zayante Creek to build a gristmill and the first powered sawmill west of the Mississippi River in 1842. The Zayante settlement was allegedly given the name “Roaring Camp” by Mexican authorities due to its rough and rowdy nature, a characteristic that does not seem out of step with the biography of Isaac Graham.

The grand redwoods of the mountains soon became a lucrative product for the frontiersman--but they would also become the subject of the first juried court case in American California. In 1846, the war between Mexico and the United States was still to rage for another year, but California had been secured relatively quickly by forces of recent American immigrants (the “Bear Flag Revolt,” incited by Colonel John C. Fremont) and the arrival of an American naval squadron supported by professional troops. The chaplain of the American flagship, Walter Colton, served as judge in Graham’s case against timberman Carlos Rousillon. Colton called a jury half of Americans and half of native Californios to decide whether Rousillon had stolen 10,000 feet of Graham’s recently milled lumber from Santa Cruz and loaded it on a ship bound for Hawaii. The jury discovered that the two men, had in fact, each sold some of the other’s lumber by accident, and each paid each other sums to even the score.

Graham died in San Francisco in 1863, leaving the Zayante estate to his daughter Matilda Jane. The lumber mill was kept busy throughout the following decades as more lumber companies arrived and rail lines were extended through the mountains. Narrow gauge railroads with steam-powered locomotives were the most efficient method for large amounts of timber to be transported out of the mountains, and Roaring Camp was in the heart of lumber country (though it lies within hiking distance of Big Trees, California’s first State Park, which was formed to preserve an untapped stand of ancient redwoods).

From 1876 to 1880, Nevada silver baron James Fair extended a preexisting railroad down from the southeast Bay Area to Santa Cruz. Fair needed a plentiful supply of inexpensive timber for his projects in Nevada, and using powerful new narrow gauge technology developed by railroad innovators Thomas and Martin Carter, he was able to cut through the heart of the Santa Cruz Mountains and its growing logging industry--an innovative feat made more impressive in that it did not involve the West’s reigning corporate railroad titan, the Southern Pacific. The sawmill at Roaring Camp, which had begun building its own narrow gauge line in 1875, was soon connected to the Felton depot of Fair’s brand new South Pacific Coast Railroad.

It did not take the Southern Pacific long to notice the upstart, however, and it soon purchased the South Pacific Coast, continuing to operate it as a narrow gauge subsidiary from 1887 to 1940, when burgeoning automotive transport,significantly decreased logging in the area, and damage from earthquakes and storms caused the line to be shut down.

In 1958, Roaring Camp’s new lessee F. Norman Clark embarked on an ambitious project to open a family-friendly park themed after the camp’s frontier heyday. After tireless efforts, the new “Roaring Camp and Big Trees” railroad line opened on April 6, 1963 with 44 passengers taking a ride on half a mile of track, pulled by 1912 steam locomotive “Dixiana Shay.” By 1984, the attraction had grown to five locomotives, six miles of track, and capacity for 3,500 riders a day. Though fire set by an arson destroyed two train trestles in 1976, new track was laid in switchbacks and the line to Bear Mountain resumed operation. With certain portions of track reachin a 9-percent grade, it is the steepest passenger train in the United States.

Employees (and even attendees) are often dressed in western frontier garb, and the structures include a general store, soda fountain, covered bridge, train station, and more. Events and activities through the decades have ranged from pioneer celebrations, train robbery reenactments, Civil War reenactments, blacksmithing workshops, frog jumping competitions, and the like.

F. Norman Clark died in 1985--his wife Georgiana took over as President and CEO of Roaring Camp until her passing in 2016. The attraction is now run by their daughter Melani. The original South Pacific Coast RR lines to Felton are operated by the Santa Cruz, Big Trees & Pacific tourist railroad, which shares a station with the Roaring Camp rail lines. Roaring Camp train riders can travel by steam to a variety of mountain landmarks, including Bear Mountain, Grizzly Flats, Big Trees, and Henry Cowell State Park. Daily train excursions to and from Roaring Camp to Santa Cruz Boardwalk are also available.