If you are unfamiliar with Robert Johnson, he is the Delta Blues musician who allegedly "sold his soul to the devil" in order to become the greatest guitar man ever at what is now the intersection of U. S. Highways 49 and 61 known as the "crossroads." Robert Johnson's life and music career ended early, at the age of 27, allegedly under mysterious circumstances at Three Forks, a store and club near Greenwood. The first floor of this beautifully renovated building houses the Blue Parrot Cafe and Veronica's Bakery. On the second floor is the museum and gallery. 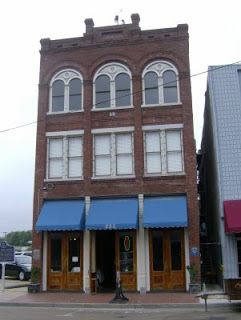