Isaiah Thornton Montgomery, a former slave who helped found the town of Mound Bayou in 1887. Mound Bayou was one of the first all-Black towns founded in the South after Reconstruction. 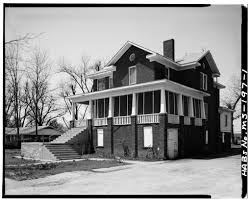 Mound Bayou is a city in Bolivar County, Mississippi. The population was 2,102 at the 2000 census. It is notable for having been founded as an independent Black community in 1887 by former slaves led by Isaiah Montgomery. By percentage, its 98.4 percent African-American majority population is one of the largest of any community in the United States.

Mound Bayou traces its origin to people from the community of Davis Bend, Mississippi. The latter was started in the 1820s by the planter Joseph E. Davis (brother of former Confederate president Jefferson Davis), who intended to create a model slave community on his plantation. Davis was influenced by the utopian ideas of Robert Owen. He encouraged self-leadership in the slave community, provided a higher standard of nutrition and health and dental care, and allowed slaves to become merchants. In the aftermath of the American Civil War, Davis Bend became an autonomous free community when Davis sold his property to former slave Benjamin Montgomery, who had run a store and been a prominent leader at Davis Bend. The prolonged agricultural depression, falling cotton prices and white hostility in the region contributed to the economic failure of Davis Bend.

Isaiah T. Montgomery led the founding of Mound Bayou in 1887 in wilderness in northwest Mississippi. The bottomlands of the Delta were a relatively undeveloped frontier, and Blacks had a chance to clear land and acquire ownership in such frontier areas. By 1900 two-thirds of the owners of land in the bottomlands were Black farmers. With high debt and continuing agricultural problems, most of them lost their land and by 1920 were sharecroppers. As cotton prices fell, the town suffered a severe economic decline in the 1920s and 1930s.