The Oregon legislature ratified the Nineteenth Amendment to the U.S. Constitution on January 14, 1920, making Oregon the 25th state to ratify. The required 36 states ratified the amendment in August, 1920, placing women’s voting rights into the U.S. Constitution. Oregon women had achieved the vote in 1912, and Oregon’s third woman legislator, Sylvia Thompson, proposed Oregon’s House Joint Resolution 1 ratifying the amendment. Thompson had to fight for her role as sponsor of Oregon’s ratification resolution and she was successful. In March 2019 students at Western Oregon University created an online exhibit with community partner the Oregon Women’s History Consortium with an analysis of historic newspapers to share this story: http://www.oregonwomenshistory.org/january-14-1920-oregon-ratifies-nineteenth-amendment/ 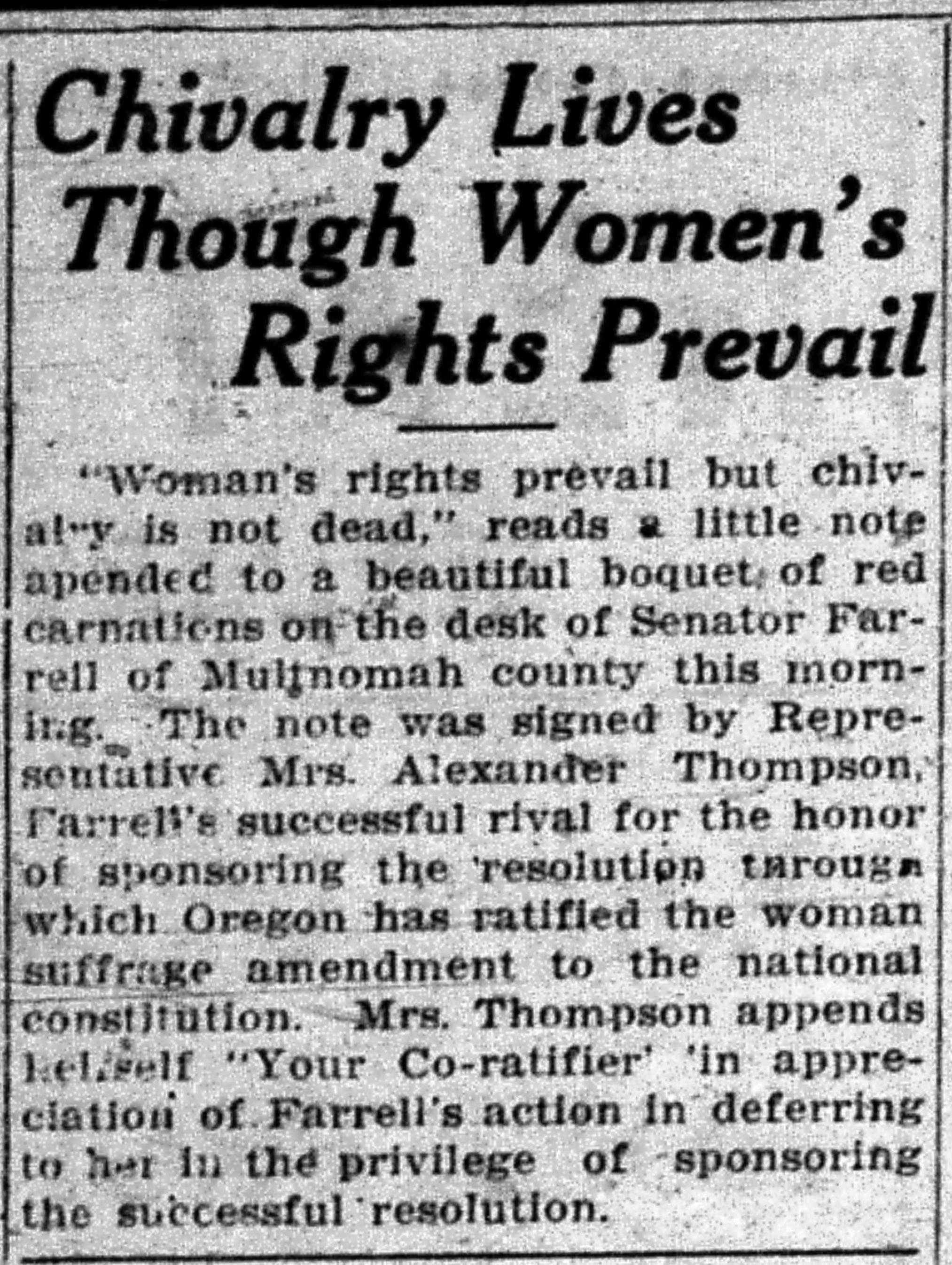 On January 14, 1920, Oregon became the twenty-fifth state to ratify the Nineteenth Amendment to the United States Constitution.  Most Oregon women had achieved voting rights in 1912 and many had been voting since that time. The Oregon Legislature held a special legislative session from Monday, January 12 to Friday, January 16, 1920, and the ratification of the Nineteenth Amendment was on the agenda. In his “Message to the Special Session” on January 12, Governor Ben W. Olcott expressed his hope that the legislators would give “unanimous approval” for ratification.

Almost immediately after Governor Olcott’s address, Sylvia Thompson (Democrat, The Dalles), Oregon’s only woman in the state legislature in 1920, proposed a ratification resolution in the House of Representatives. At about the same time, Senator Robert Farrell (Republican, Multnomah County) proposed a similar resolution in the Oregon Senate. What appeared at first to be a simple process of ratification quickly turned into a three-day event. Many newspaper reporters followed each dramatic turn as the process unfolded with conflict, negotiation, confusion, and finally, a resolution. An over-eager newspaper photographer added even more interest to the story, leading to charges of “fabrication of news.” By Wednesday, January 14, 1920, Oregon’s House Joint Resolution No. 1, which ratified the Nineteenth Amendment to the Federal Constitution, had been signed and filed with the Secretary of State.

Visit the online exhibit for more on this story: http://www.oregonwomenshistory.org/january-14-1920-oregon-ratifies-nineteenth-amendment/