Built in 1754, Holmes-Hendrickson House is a combination structure as it is a melding of both Georgian and Dutch architectural styles. The house blends English and Dutch elements, echoing the marriage between Dutch woman Teuntje Hendrickson and Englishman Jonathan Holmes. Passed along within the family until 1870, Holmes-Hendrickson House is a well-preserved look into the lives of a farming family in the 18th and 19th century.

The front of Holmes-Hendrickson House. Photo by the MCHA. 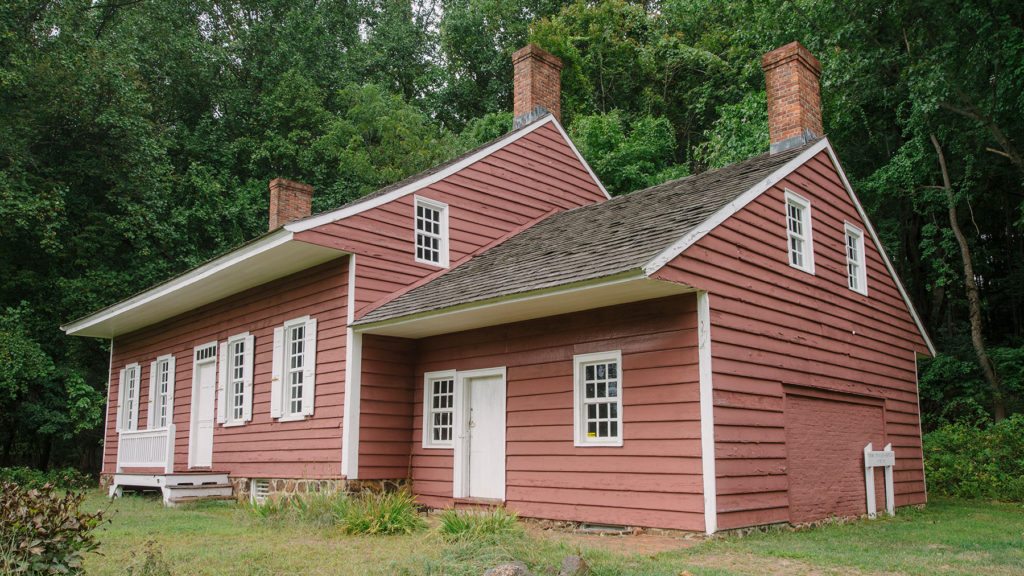 Built in 1754, Holmes-Hendrickson House is a combination structure as it is a melding of both Georgian and Dutch architectural styles. The house blends English and Dutch elements, echoing the marriage between Dutch woman Teuntje Hendrickson and Englishman Jonathan Holmes. Their son William bought the land in 1752 and in 1756, his first cousin Garret then took ownership of the house and turned it into the working farm it became known as.

There are two entrances to the home, one in the Dutch style in the front and another in the Georgian style in the back, catering to the guests they would invite in their home. The nature and nationality of their guests sometimes determined which entrance they would be lead to. Up the front stairs stands the Dutch style double door which could be opened in one of three ways; from the top, from the bottom, or with both sections of the door open together. It was seen as more open and hospitable manner in which to greet guests and they would enter the home into the large multi-purpose dining room. The family would have their dinners together in this room as well as host dinner parties and entertain by folding down leafs of the table and sliding it against a side wall along with their chairs. In a more English style, the back entrance opened into a small foyer attached to a breezeway which allowed the guest to state their business before they were welcomed into the greater area of the house. This breezeway was created by the location of both doors being opposite one another on the first floor of the house.

The union of a Dutch woman and an Englishman was not very common during the 16th century. The very nature of their relationship was something somewhat taboo as both communities had different customs, religious traditions, and lives within Middletown and Pleasant Valley. They mostly kept to themselves, but given the marriage of Teuntje and Jonathan, they erected a house as a representation of their life they built together. Their son William made the most improvement to the property as he built the house itself as well as other additional structures. When Teuntje’s nephew Garret Hendrickson purchased the house, he was already building a life of his own with his wife Catherine Denise. Over the course of sixteen years of marriage, they had six children, five of them survived past childhood. She ended up passing away in 1771, leading Garret to remarry a woman named Helena (Lena) VanLieu and they had five children together over eleven years of marriage.

It was during this marriage that the Revolutionary War broke out and Garret picked up arms to serve in the First Regiments of the Monmouth Militia as the first Lieutenant under Captain William Schenk’s company. During his time in the militia, Garret was hit by a musket ball in 1780 which resulted in him losing the use of his right arm permanently. In 1782, a raiding party of British refugees arrived on the shore at Sandy Hook and as they made their way westward, they attacked farms along the way. They would take horses, supplies, and household goods to help them on their journey, ultimately ending up at the Hendrickson farm. Of the somewhat forty British soldiers captured were Garret Hendrickson’s son, his brother, and other residents in the home. One account tells of a raider taking a ham and wrapping it in Lena’s silk dress during this attack. One of Garret’s sons, Hendrick G. and a friend of his stowed away in the attic, managing to keep themselves hidden to run to Captain John Schenck’s home. A rescue party was soon assembled and they gave chase to the British and freed the prisoners that were taken from the Hendrickson home. The only fatality in this skirmish was Hendrick G.’s friend, William Thomson.

After the war and the death of his second wife, Garret remarried once more to Nelly Smock and the two did not have any children together. With his death in 1801, Garret left his farm to his eldest son Hendrick and to Nelly. Hendrick was married for ten years at the time and had five children with wife Phoebe Van Mater. The couple went on to have four more children in their new home, continuing the tradition of making Holmes-Hendrickson House one that is at the heart of the family. Two of Hendrick’s children took over the home after his death, splitting the property between the two of them. The land where the house stood was then passed on to his son in 1870 and then sold at a sheriff’s sale to help pay for outstanding debt. The house ended up in the hands of a woman by the name of Agnes Herbert in 1899 until her death in 1915. Her daughters ended up selling the property to Bell Telephone Laboratories in 1929.

Over the next thirty years, Holmes-Hendrickson House was utilized for storage purposes until the house was threatened to be torn down by Bell and Western Electric in order to use the land it sat on for its new Holmdel Laboratories location. Public upset and persuasion eventually convinced the company to save the house and it was moved a half of a mile down the street to its current location on Longstreet Road. In 1959, the Monmouth County Historical Association was given the house to preserve and protect and it has been in their hands ever since. The house has not undergone any major restorations besides the removal of a few windows from the 19th century as it does not have any heat, plumbing, or electricity, thus making it a remarkable example of an 18th century farmhouse.

Open May through September