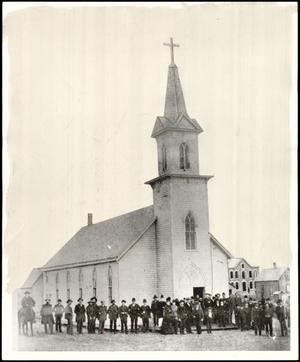 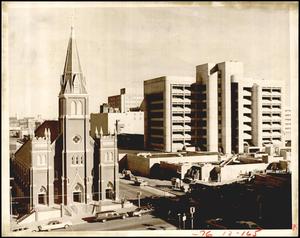 Photograph used for a story in the Oklahoma Times newspaper. Caption: "This Frame building was the first church built in Oklahoma City." 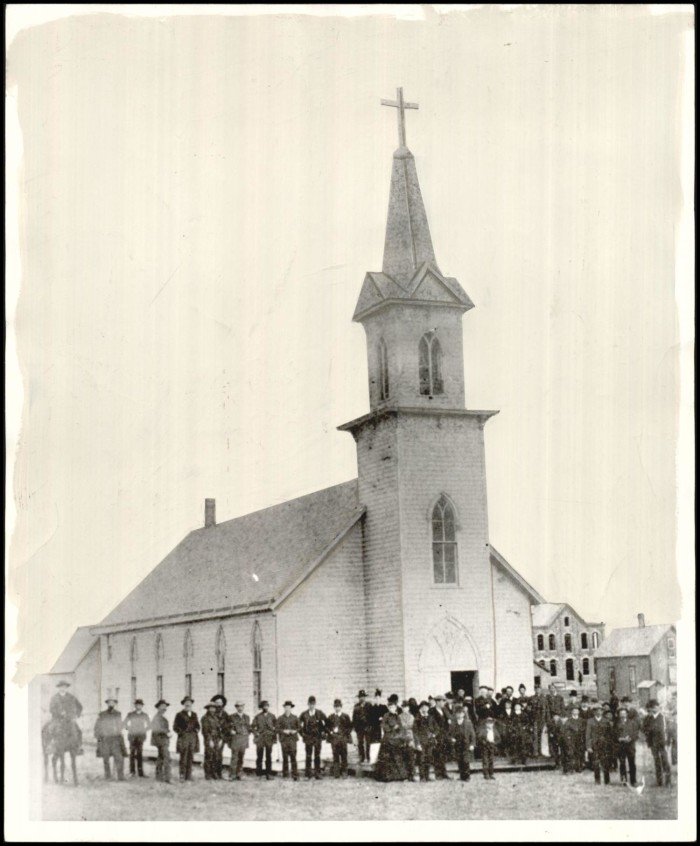 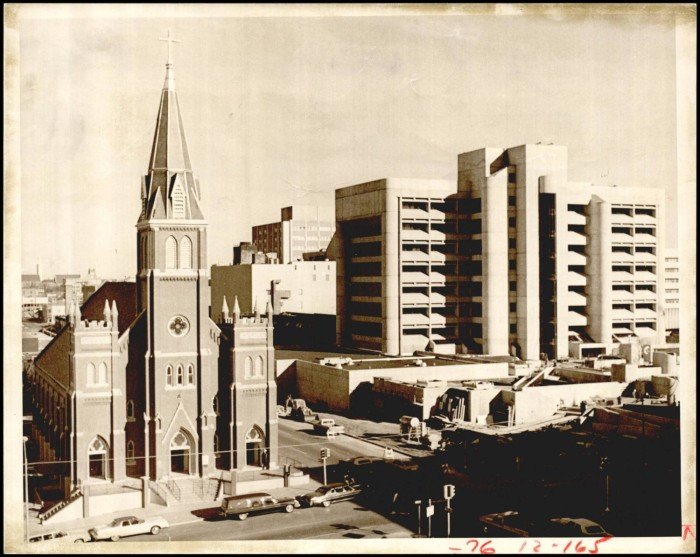 Photograph used for a story in the Daily Oklahoman newspaper. Caption: "Rev. Msgr. A.A. Isenbart examines scaffolding in St. Joseph's Old Cathedral which is to undergo a $ 250,000 remodeling job in the next six months." 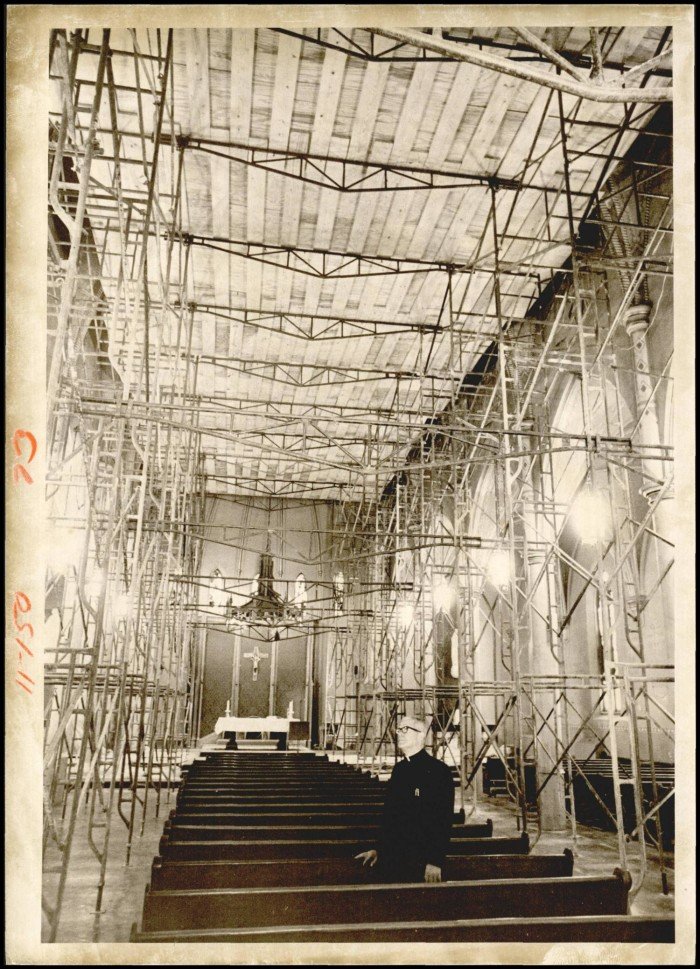 Photo taken by James Styers April 2nd, 2019. The Oklahoma City Memorial can be seen in the background. 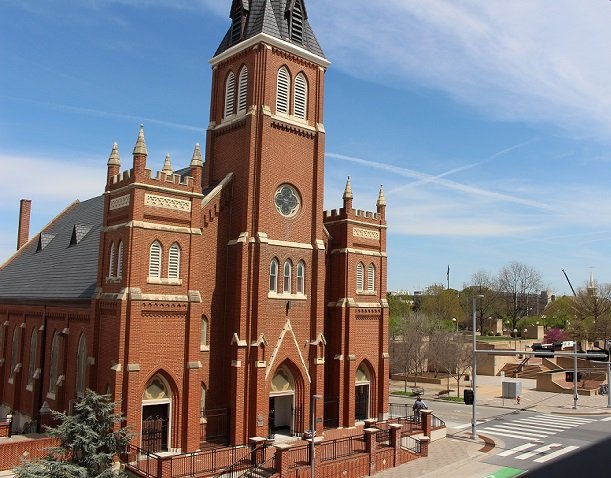 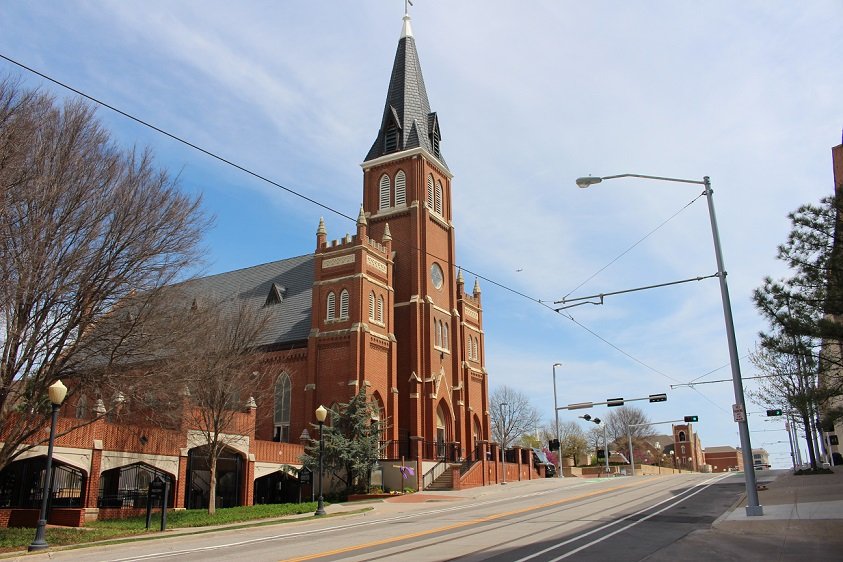 Catholicism in the area of what now is present day Oklahoma dates back to the time of Spanish and French expeditions in the New World in the mid 1500s. Among other things, one of the objectives of the European explorers was to evangelize the native tribes. This small Catholic presence would grow just slightly until the first permanent Catholic missionary in Indian Territory. In 1875 French Benediction monks arrived in Potawatomi County to set up a monastery in order to escape persecution in France. This monastery would later become St. Gregory’s in present day Shawnee. The native tribes, again, were the focus of the Catholic missionaries. However, the bulk of the early Catholic population in Oklahoma would come from Caucasian immigrants. Italians, Germans, Polish, Irish, and Lebanese laborers and merchants were flocking to the Oklahoma City area around the time of the Land Run.

The Land Run of 1889 was part of the movement to seek new beginnings and fortunes in the west of America. As some 4000 settlers raced to the Oklahoma station to set up homes and businesses, they also set up churches. Many of the first services across all denominations took place in tents or other primitive structures. The same was the case for Rev. Nicolas Scallon, who arrived by train on April 22nd, 1889 to the infant city. Upon his arrival he started to amass his congregation and within two weeks of the land run, plans had been made to build a church.

The original Church was a small wooden structure that was complete with cross and bell by August 2nd, 1889. It was the first church built in Oklahoma City, done so by the congregation of 16 families. A short two years later the congregation had outgrown its humble church, and in 1901 the plans were drawn for a much bigger, brick building. It was dedicated in 1904 by Oklahoma’s first bishop, Rev. Theophile Meerschaert, and in 1905, Pope Pius X raised the Vicarate of the Oklahoma Territory to a diocese, making St. Joseph’s the first cathedral in Oklahoma. Over the next several decades the Cathedral has seen many changes and renovations, the largest coming after the Murrah building bombing in 1995. The damage was extensive and the church was closed for two years.

Today, 130 years later, the church is a part of the National Register of Historic Places. The building still stands and holds daily and weekend masses for its congregation. A trip inside will leave no doubt as to why it is referrred to as the "Old Cathedral". From the stained glass windows, to the chipped wooden pews, the Cathedral's dated look is still beautiful.