The Texas Rose Festival is a 3-day event held annually in Tyler, Texas. The festival, that began in 1933, celebrates the role of the rose-growing community in the local economy. The event takes place in the third week of October every year. Furthermore, this event is an opportunity for young adult females, typically sophomores in college, to come and be presented to the community as a way of introducing them into a new fashionable society. In this way, the Texas Rose Festival has become an extremely popular and somewhat exclusive debutante activity in East Texas.

This is an old postcard from Tyler titled "The Rose Garden of America." This garden is one of the many locations that the Festival uses during the Texas Rose Festival. 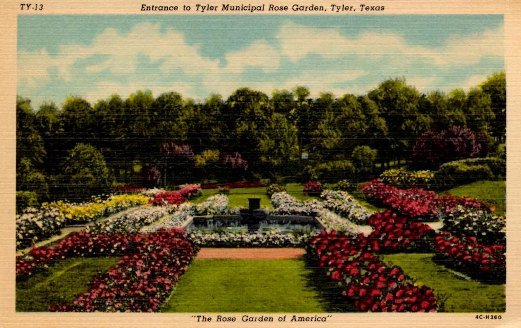 Here is another postcard from Tyler depicting what the Rose fields used to look like back in the late 1800s. 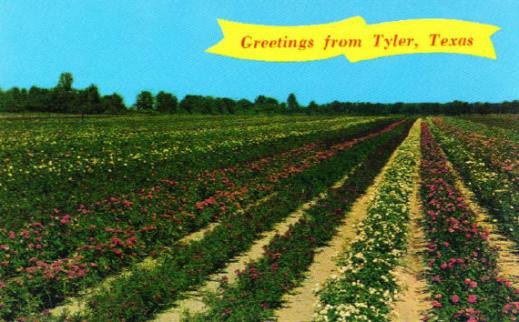 This image depicts the ending of The Coronation of the Queen from a recent Rose Festival. As you can see the women are all wearing exotic dresses and are each escorted by a male escort. 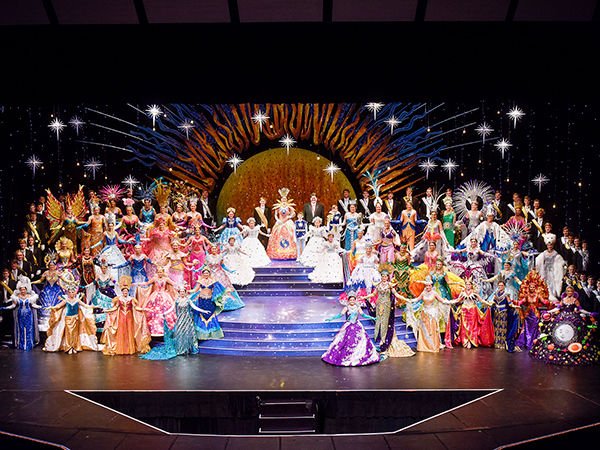 This image depicts a "behind the scenes" view of the ladies waiting to be escorted across for the audience to see. 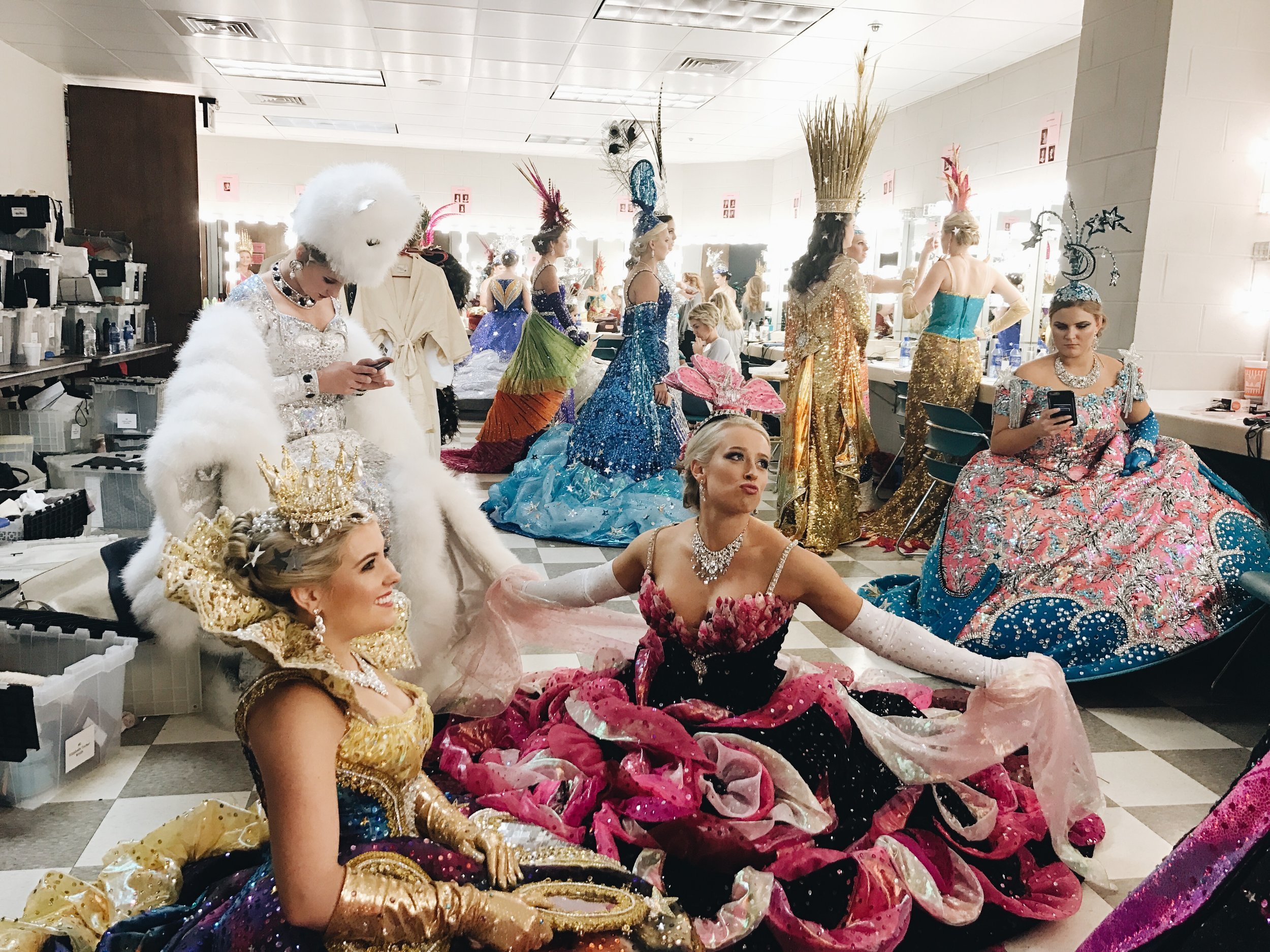 Here is a float on which several of the Duchesses are waving to the crowds on the streets of Tyler, Texas. 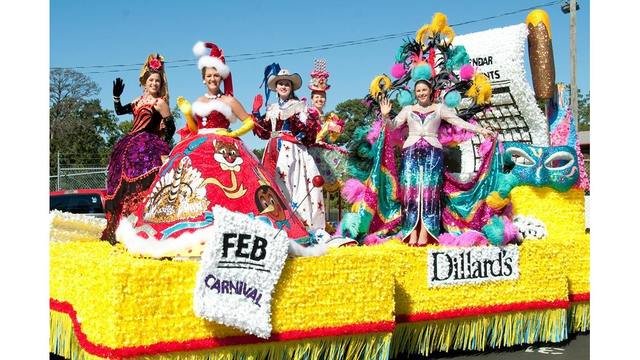 Here is an image of the 2017 Queen of the Rose Festival being escorted back up the stairs to await the ending of the Coronation. 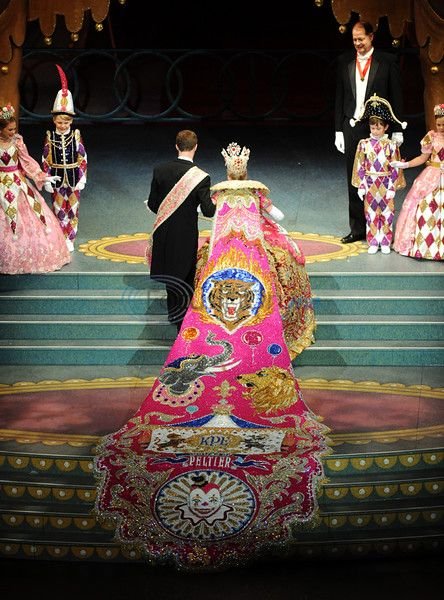 Here are thousands of rose bushes in the Tyler Rose Museum. The garden also has several beautiful fountains that are around the roses where people are welcome to come and enjoy the garden at no charge. 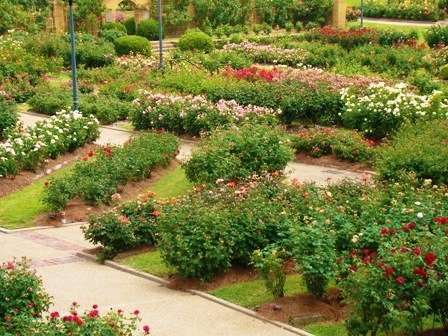 The Texas Rose Festival started and continues to take place in a small town in East Texas called Tyler. The festival is held annually to celebrate the rich history behind the rose growing community in East Texas and how the production of roses shaped its local economy. Tyler, Texas is predominantly located in Smith County. There are several reasons as to why its called the "Rose" festival, and all of them have to do with the town the festival originated and takes place in. During the late 1800s, Tyler was known for its production of both corn and cotton.  Most of the income coming through Tyler was either from those two crops or a selection of various fruits grown in the area.  It wasn't until late 1879 that the first recorded sale of rose bushes took place.  However, roses were still not the primary source of income coming from the Tyler area.  Fruit sales, such as the sale of peaches, had dominated the area for several years.  It wasn't until a combination of the peach blight, drought, and winter freezes wiped out most of the fruit industry that the people in Tyler decided to switch over to the cultivation of roses.  It was later found out that, coincidentally, the soil in the Tyler area was better suited to grow roses than any other crop.  The mixture of sandy-acid soil, a relative abundance of rainfall (45 inches per year), and mild winters all provide significant advantages to field production.
It wasn't until around 1920 when Tyler's rose industry had fully developed into a significant business.  By 1940, more than half the United States' supply of rose bushes were grown within ten miles of Tyler.  This success is why Tyler is most commonly referred to as "The Rose Capital of America."  In 1945, there were over 200 nurserymen and 1,500 employees tasked with growing roses in East Texas commercially.  Over 80% of the roses being produced were from Smith County. Finally, by the 1970s, over 15 million rose bushes were being shipped from Texas annually all across America making East Texas number one in overall rose production.
It was through this history that the Texas Rose Festival came about.  The Tyler Garden Club created the first rose festival in 1933 and called it the "Tyler Rose Festival."  Its purpose was to honor the history of Tyler's rose production and to show off the elegance of their small town.  The name was later changed in 1936 to the "Texas Rose Festival" in honor of the Texas Centennial.  However, most people from Tyler who regularly attend continue to call it by its original name.  Each day of the Festival is marked with a particular special event for the enjoyment of tourists and locals alike.  Of those events, there are three that are considered the main highlights of the Festival.  The first is the Rose Show.  The Rose Show is a free admission event held at the Tyler Rose Museum where individuals can come and see the history of Tyler's rose production as well as the beautiful gardens that house thousands of roses year long.

The second main event held during the festival is the Coronation of the Queen.   This event is arguably the biggest reason why the Texas Rose Festival is still in existence today.  During the Coronation of the Queen, young sophomore women in college are presented wearing lavish dresses and costumes to thousands of people at a large convention center.  While the Texas Rose Festival may have been started in remembrance of Tyler's early rose production, its continued success is mainly due to the debutante side of the Festival.  This part of the Rose Festival is very exclusive. The Queen must be from Tyler and is typically from a family with a wealthy background and past involvement with the Festival. Once a Queen has been selected, the other women are separated into two different groups, the "Ladies in waiting" and the out of town Duchesses and escorts. The ladies in waiting consist of a small group of women from Tyler whose families have had involvement with the festival for a long time. In other words, you must be from Tyler to have the opportunity to become a lady in waiting.  The Duchesses and other escorts are either sponsored by a family from Tyler that is in the Festival or invited by a family that lives in Tyler and has affiliation with the Festival.  Since the Coronation showcase is generally meant for the women, the escorts have a much easier job and less of a problem getting into the Festival.  On the night of the coronation, the Duchesses are presented first, followed by the Ladies in waiting, who are followed by the Queen. The men, or escorts, walk them across a large stage for the audience to admire and then wait as each lady does a bow to the audience.  This is by far the biggest event during the Festival.  Tourists from all over the nation flock to Tyler in October to see the beautiful dresses and admire the even more beautiful pageantry.  Countless hours go into the planning and preparation of this coronation.   The last main event is the Rose Festival Parade.  Early Sunday morning the town wakes up and attends a huge parade consisting of floats, bands, and local sponsors.  In addition to that, the Queen and her entire court are all on their own floats, dressed in their beautiful dresses for those who didn't get to see the Coronation the night before. Each float is decorated in accordance with that year's Festival theme and has a member of the Coronation riding it. This is an absolutely beautiful sight to see.  There are also several other smaller events that take place during these three days.  The most notable of these is the Queens Tea.  During the Queens Tea, the Queen and Ladies in waiting are all displayed throughout the rose garden.  The Tea's purpose is to allow the visitors and audience a chance to come and talk to the members of the Festival while simultaneously taking a few pictures.  This event usually caters to the younger children who don't quite realize they aren't actually meeting a real Queen.  However, it is also a chance for past members of the Festival to come and reminisce on their past experiences through conversation with the current festival members.