The University of Oklahoma's Centennial Arches

The Centennial Arches, located on the South Oval of the University of Oklahoma's campus in Norman, is one of many different donations given by past graduating classes at the University in honor of their time spent there. Furthermore, these arches also represent a much greater accomplishment, the University's 100th birthday. The arches stand in tribute to the first 100 years of students, faculty, and alumni whos hard work and dedication have transformed the University of Oklahoma into one of the top public Universities in the Nation.

This is a more recently taken photo of the Centennial Arches on OU's Campus. In the background are hundreds of students heading to class. (Found on Google images) 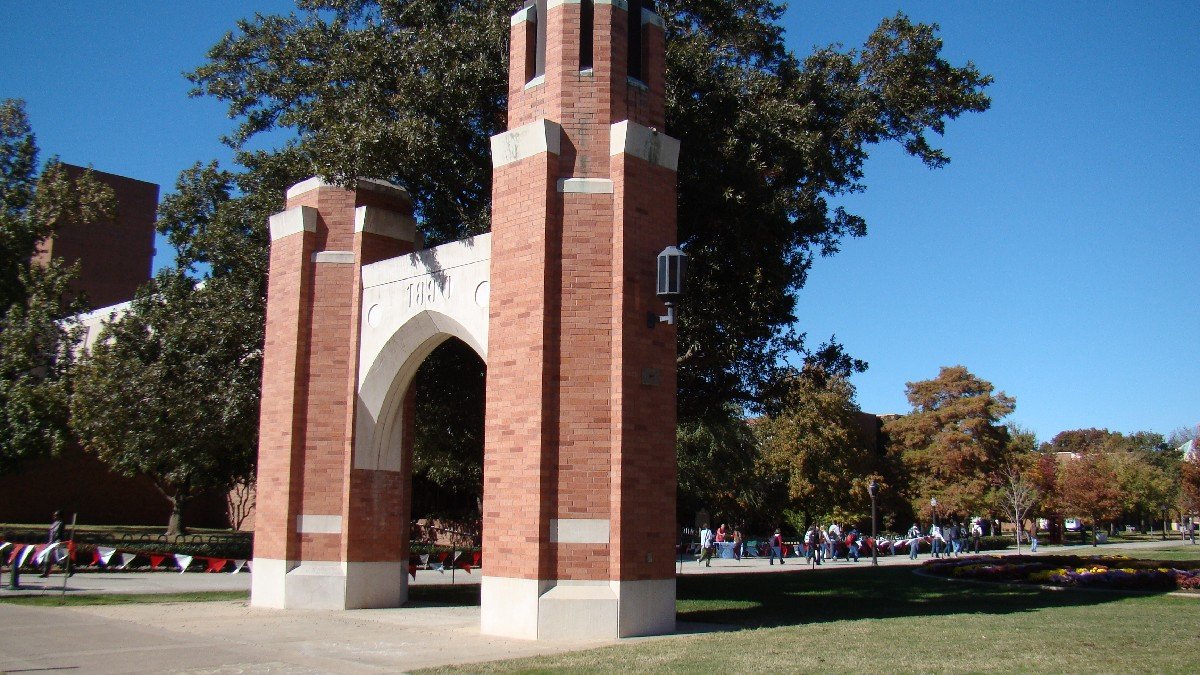 A photo of the arches from a different angle and with a greater field of view. Here you can see both sets of arches and the infamous "Seed Sower" statue that is modeled after the University's first president, David Ross Boyd. (Google Images) 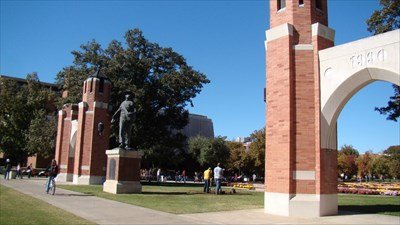 This is a closer view of one of the arches. (Found on Google images) 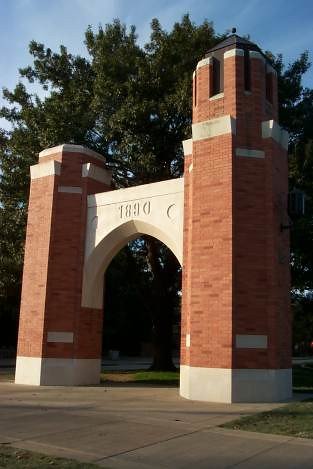 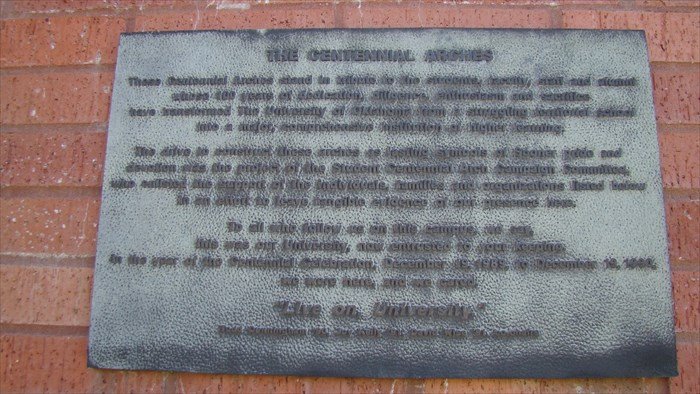 The University of Oklahoma was founded in 1890 back when the state of Oklahoma was still divided between the Oklahoma territory and the Indian territory.  Throughout its existence, the University has gone on to accomplish countless great things.  The biggest accomplishment to date would be the exponential growth in enrollment at the University over its first 100 years of existence.  This is extremely important because the University of Oklahoma is very dependent on its current students and its alumni that graduate from the University when it comes to driving its future success.  The University has made countless impacts on their students' lives.  So much, in fact, that most students who graduate from Oklahoma seek to give back to the University as a way of showing their appreciation for all the opportunities the University has opened for them. As a result, it has become tradition, almost, for the graduating class to give back to the school in the form of a "Class gift".  For example, the "Seed Sower" monument, modeled after the university's first president, David Ross Boyd, was constructed to represent the sowing of the seeds of knowledge and wisdom, that would bear fruit in time.  David Ross Boyd was famously known for setting aside half of his paycheck to fund the planting and caretaking of the first trees around the University's campus.  Its monuments like these that represent and symbolize the rich history that Oklahoma has in giving back to their beloved University.  It is this same history and culture that has paved the way for further donations like the infamous Centennial Arches.
The Centennial Arches are special. The graduating class of 1990, along with faculty, staff, alumni, and help from the local community funded the construction of the Centennial arches as a tribute to the past students, faculty, and alumni that transformed their University over the past 100 years into one of the top public Universities in the Nation.  However, the construction of these arches turned out to be no simple task.  Funding, amongst other delays, caused the construction of the arches to stall several times.  In turn, further involvement from the school was necessary. Students and alumni began to take action by initiating fundraisers around Campus. One fraternity on campus, Pi Kappa Alpha, scheduled a benefit run with all proceeds going towards the Centennial Arch Campaign.  One student, Joy Kelley, said she raised $67,000 to build the Centennial arches before she graduated.  These two examples portray exactly what it means to be a student at Oklahoma.  The level of care and concern for their school is ultimately inspiring on a whole different level. Sadly, due to one donor declaring bankruptcy, $40,000 was removed from the construction fund sending the students and everyone responsible for the arches' construction into a panic.  It was due to this lack of funding that the arch construction was delayed for approximately 2 years.
It wasn't until 1992, two years after its original projected completion, that the Centennial arches had finally finished construction.  The dedication of the arches was given before the 1992 Homecoming parade on the University's campus.  The graduating class of 1990 was in attendance as well as all the other faculty, staff, and alumni that helped pave the way towards this exciting moment.
The dedication was extremely powerful for a number of different reasons.  First off, a sense of relief and accomplishment was felt by those who had a direct role in the funding and construction of these Centennial Arches.  The fact that these arches were built to represent the 100th birthday of the University could not have been a more perfect fit.  The long, strenuous process of completing this monument parallels the long and strenuous journey that the University endured in reaching its 100-year mark as a University.  Therefore, these arches represent, for many, "the journey" made by past students and also the journey that future students will eventually undertake themselves in furthering their education.  Secondly, the arches are a symbol to everyone who currently attends the University that they weren't the first to endure this journey.  In a way, it gives them a sense of belonging and reassurance that they aren't entirely "alone" for the ride.  Thirdly, this was a monumental day for the University as a whole.  It's easy to get caught up in the moment and forget about past accomplishments and achievements. This was a chance for the University to reflect on where it started, where it is now, and where it will go in the future.  The University of Oklahoma has come a long way from only having one building and a handful of students enrolled.  After 100 years, Oklahoma has improved their enrollment, degree options, number of colleges, number of faculty and staff, and most importantly the overall quality of education that is administered.  The Centennial Arches are the perfect embodiment of all that hard work and progress.
Furthermore, visiting the arches is an absolute delight, to say the least.  The beautiful, red brick structures are some of the first things seen when arriving on the south side of campus. In this way, the arches symbolize both a symbolic and actual "welcoming gateway" onto the University of Oklahoma's beautiful campus.  On top of that, the surrounding red brick buildings that the University is frequently recognized for add to the rich ambiance of the South Oval on Oklahoma's campus that these monuments have so much credit for creating.