Thomas Square is the oldest park in Hawaii and was added to the National Register of Historic Places on April 25, 1972. 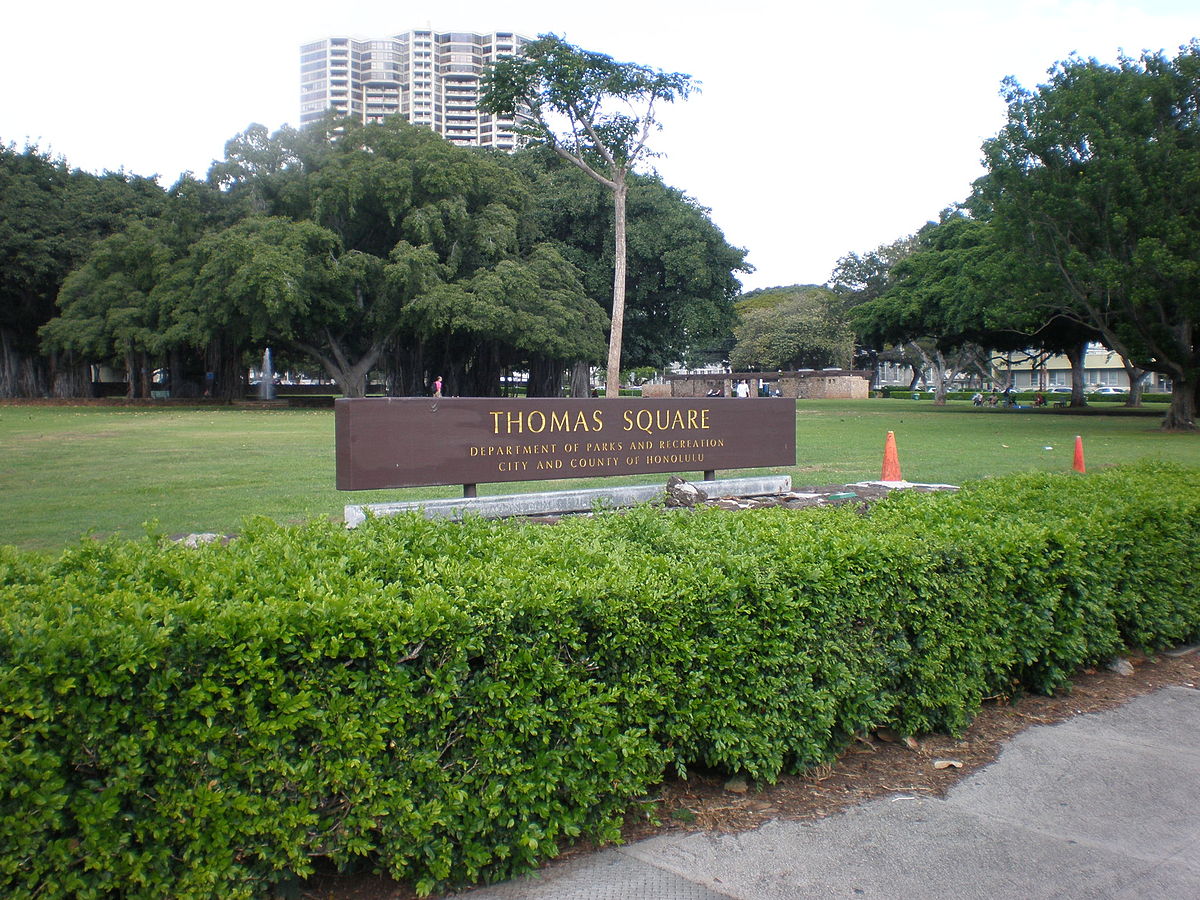 Thomas Square derives its name from British Rear-Admiral Richard Thomas who arrived to restore Hawaiian sovereignty and subsequently reverse the actions of British Lord George Paulet who had seized Hawaii (without authorization) for Britain five months earlier. The ceremony took place on the grounds now named for Admiral Thomas. There, Hawaiian King Kamehameha III proclaimed, "Ua mau ke ea o ka 'aina i ka pono," which roughly translates to "The life of the land is preserved in righteousness," which now serves as the Hawaii state motto.
During the early 1840s, the Hawaiian Kingdom sought international recognition of its independence. He sent diplomats to Britain, Russia, France, and the United States, which appeared to be successful in removing those nations' desire to gain control over the islands, be it politically, economically or militarily (something they had all indicated a willingness to do at some point).
In the early 1840s, the British consul got word of harassment towards British subjects living in Hawaii. In response, Admiral Thomas sent Lord George Paulet, captain of the frigate Carysfort to sail to Hawaii and investigate the situation and meet with King Kamehameha III. When Paulet arrived, Kamehameha III was located on a different island than Oahu, where Paulet landed. A series of communications frustrated Paulet, who demanded to meet with Kamehameha III, but the delays pushed Paulet to choose the more drastic option of taking control of the island in the name of Great Britain. On February 10, 1843, to avoid bloodshed, Kamehameha III agreed to Paulet's demands and decided to relinquish the Islands to Paulet. However, Paulet's actions contradicted British policy,
Queen Victoria ordered Rear-Admiral Richard Thomas, commander-in-chief of the British Pacific Squadron, to set sail for Hawaii in the summer of 1843 and rectify the unapproved conquest carried out by Paulet -- known now as The Paulet Affair. Thomas arrived in Honolulu on July 26 on his flagship HMS Dublin and immediately became Local Representative of the British Commission (he out-ranked Paulet).  Five days later, on July 31, Thomas restored Kamehameha III as leader of Hawaii and thus returned the island's sovereign status; the British Flag was taken down and replaced with the Hawaiian flag.
In a speech delivered at Kawaiahao Church, Kamehameha III declared, "Ua mau ke ea o ka 'aina i ka pono," which means "The life of the land is preserved in righteousness," which now serves as the state motto. Kamehameha III later named the place where the ceremony was held in Downtown Honolulu "Thomas Square" in Admiral Thomas's honor and dedicated it as a public park.