Constructed in 1910 as a community hall for employees of the Comstock-Cheney Company, Ivoryton Playhouse is a historic professional summer theater founded in 1930. According to its website, it was the first self-supporting summer theater in the country. The building was designed in the Ne-Classical Revival style and was added to the National Register of Historic Places in 1982. After World War II, numerous Hollywood stars performed here including Marlon Brando, Groucho Marx, Betty Grable, Mae West, Kathrine Hepburn (she made her professional debut here), and Don Ameche. The theater has been offering year-round productions (seven professional shows) since 2006.

Ivoryton Playhouse was established in 1930 by Milton Steifel. It was the first the first self-supporting summer theater in the country. 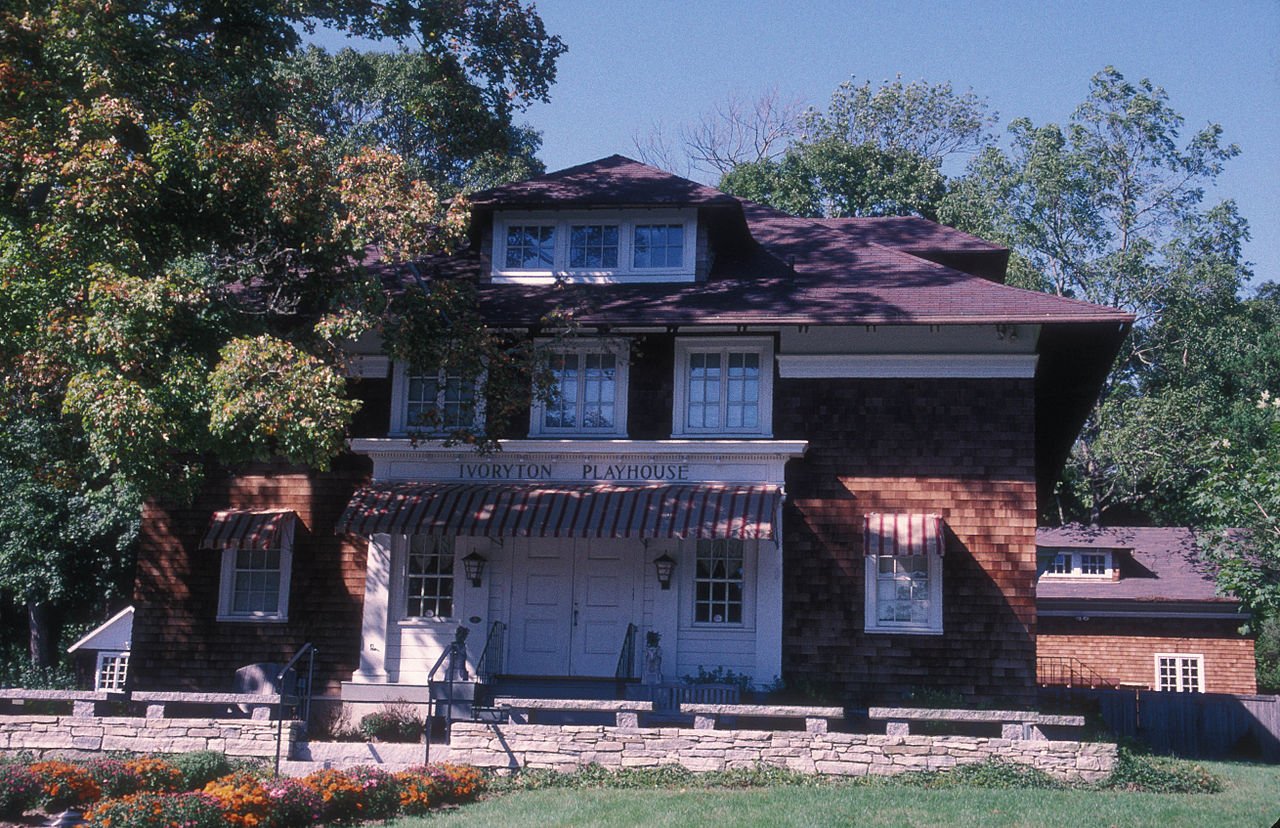 Comstock-Cheney Company was a leading ivory processing business in the latter half of the 19th century. Ivory was an important commodity in the 1800s; it was an ideal material for carving and decoration and demand for it remained high until the early 20th century. Comstock-Cheney Company produced combs and other items but then started to manufacture piano keys towards the end of the century. As a result, the company expanded and hired more employees. It also provided housing; by 1900 the company owned around 135 houses. To provide a place for employees to socialize, the company also built Comstock-Cheney Hall.

The company sold the hall (it is not clear to whom) by 1930. As luck would have it, that year theater director and producer Milton Stiefel (1900-1983), had come to Essex to rest after traveling around the country managing productions. He happened to see the hall and thought it would make a good place for a playhouse. After making preparations and getting a cast together, the first show opened on June 17, 1930. It seems that he rented the building because it wasn't until 1938 that he finally bought it. Stiefel managed the playhouse until his retirement in 1973.

The next owner, Ken Krezel, operated the playhouse until 1979. Soon after, there were plans to tear the building down to build a discount drug store. In response, the Ivoryton Playhouse Foundation was established to buy it. The next several years were difficult as a series of producers could not get the summer theater program back on track. Finally, in 1987 a new company (The River Rep) was able to revive the playhouse and remained for 18 years. The current director, Jaqueline Hubbard, has led the playhouse since 2006.