Constructed in 1857 for William Campbell Edmondson, his wife Susan Rhea Edmondson, and their five children, Edmondson Hall is a well-preserved example of a late vernacular Greek Revival style house. Found in the community of Meadowview, the house once stood as the centerpiece of Edmondson’s successful 383-acre estate prior to the Civil War. After the war, Edmondson fell into financial difficulty and was forced the sell the majority of his land. After Edmondson’s death in 1883, the house passed through several hands, while retaining its historic integrity. It remains privately owned today. Edmondson Hall was designated a Virginia Landmark on September 17, 1997 and added to the National Register of Historic Places on June 11, 1998. 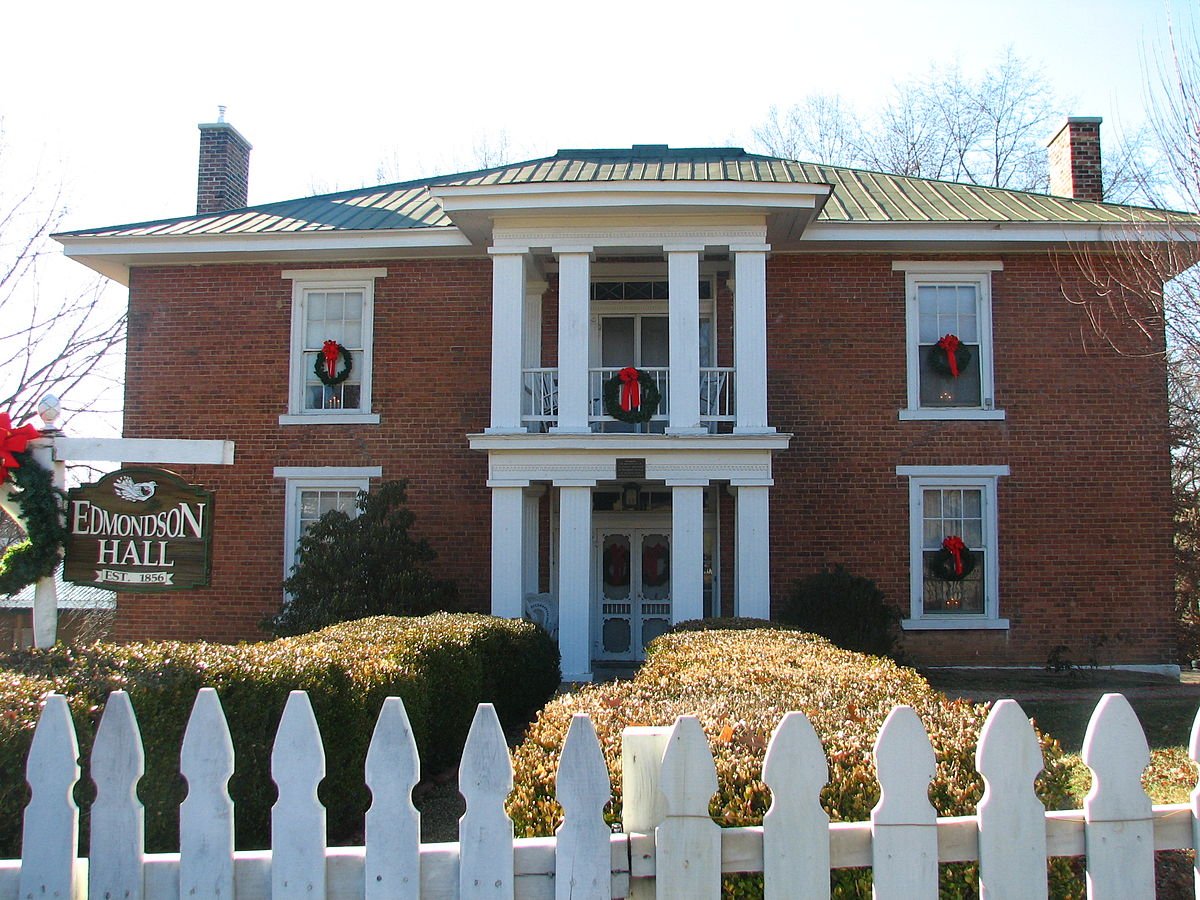 In 1847, 31-year-old William Campbell Edmondson and his eighteen-year-old wife Susan Rhea Edmondson moved to Washington County from nearby Tazewell County. Susan had recently inherited land from her grandfather John Preston, which may have spurred the couple’s move.  From the estate of James Glenn, William purchased 383 acres east of Abingdon along Cedar Creek and established a prosperous farm.

Ten years later in 1857, Edmondson constructed a large house as the centerpiece of his estate. This house was constructed in a late vernacular Greek Revival style, arranged in a two-story, double-pile layout. Defining the house’s façade is a two-story, single-bay entry porch, and four interior-end chimneys are placed along the side elevations of the house. While many of the more high-style Greek Revival features are not found on this house, it is still possesses the basic features of the architectural style. The most significant aspect of Edmondson Hall currently is its well-preserved interior. The original floors, walls, trim, molding, doors, hardware, mantels, and graining are all still present inside this house.

The community of Meadowview sprang up around the same time as Edmondson Hall, due in part to the introduction the Virginia and Tennessee Railroad which ran from Lynchburg to Bristol. Already home to several farmers, laborers, and a few skilled craftsmen, once the train depot opened in the community, Meadowview witnessed a commercial boom that included shoemakers, a brick mason, a stone mason, carpenters, seamstresses, two merchants, a blacksmith, and a clerk. Being the wealthiest individual in the community, Edmondson undoubtedly contributed to and benefited from the growing economy around the new train depot, so much so that by the end of the decade, William owned fourteen slaves, operated one of Washington County’s most prosperous lumber mills, with his real estate value being listed as $26,000.

Susan Edmondson unfortunately died in 1860, along with their youngest daughter who died at three months old. William Edmondson soon remarried, and he and his new wife Sarah, had three children between them. The Edmondsons and Edmondson Hall survived the Civil War, but William suffered from the financial setbacks of war and loss like many of his social status. He would never regain such a position of wealth as he had prior to the Civil War. In 1870, he and his business partner Thomas W. Colley opened a general store as a means to regain some lost investments in Meadowview near the railroad. For the next six years, the two men operated the store and even opened the first Meadowview post office in the general store. Unfortunately, the store never proved to be financially successful as the community Meadowview slowly dwindled during the decade. In 1879, Edmondson was forced to sell the majority of his land around Meadowview as a means to repay his debts of almost $15,000.

William Campbell Edmondson passed away in 1883, never witnessing the revival of Meadowview. His widow Sarah remained in Edmondson Hall until her death in 1894. Afterwards, Edmondson Hall and the remaining few acres on which the house sits was sold numerous times during the 20th-century. Today it remains privately owned and one of Meadowview’s most significant buildings. Edmondson Hall was designated a Virginia Landmark on September 17, 1997 and added to the National Register of Historic Places on June 11, 1998.