This is just one of Arthur Erdmann's 1917 draft cards. this military record, believed to have been filled out after the war in 1919, shows his name spelled with two 'n's and represents his involvement in World War I, although the battles he fought in and 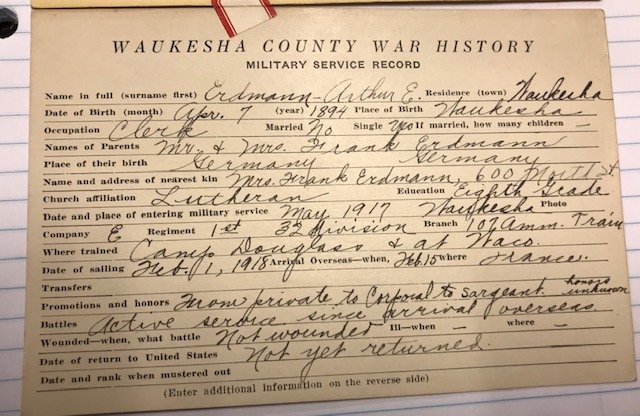 An image of the Waukesha Township in 1914, this map displays various names and locations of families and where they lived at the time. Directly East and on the border of the large gray area, believed to be farmland, you will see the name A. Erdman, of whe 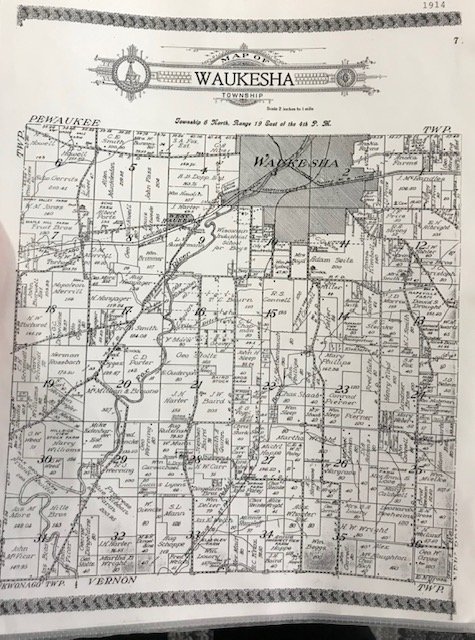 Born to German immigrants Augusta and Frank Erdman on April 7 1894, Arthur “Art” Erdman was raised in heavily German-populated, and highly anti-German Waukesha, Wisconsin. His Lutheran parents raised him to speak both German and English, and he received an eighth-grade education. The family seemed to have struggled financially, and Art left school to work as a shop clerk and supplement the family income. He later became a bartender at Waukesha's Fox River Hotel (227 Madison Street).

In 1917, hoping to do something more for his country, 23-year-old Art enlisted in the army alongside his father Frank. After training at Camp Douglas and in Waco, Texas, Art was assigned to Company E, First 32 Division of the 107 Ammunition Train. He was transported to France on February 1st, 1918. While actively serving in France, he was promoted to Corporal, then to Sergeant; incomplete records suggest he also earned additional honors.

Upon returning to the United States, Art Erdmann moved to 825 South St. in Oconomowoc Wisconsin with the rest of his family. His father, also a veteran, lived in Oconomowoc until his death in 1936. Frank Erdmann is buried in La Belle Cemetery.

From the year of his birth to post-WWI, the spelling of the veterans' last name has fluctuated from the more Americanized single ‘n’ of “Erdman” to the Germanic double ‘n’ of “Erdmann.” Most likely, Art and his German-born parents did this to avoid the well-documented discrimination against people with German ties. During the Great War, of course, people in the United States identified Germans as the ‘enemy.’ Because German immigrants often continued speaking their native language, they often formed German churches and--particularly in Wisconsin--German-language newspapers and cultural organizations. This made them easy targets for harassment and discrimination. As the United States became more involved with the war in Europe, tensions grew between "native" (i.e. Anglo) Americans and the naturalized German-Americans.

Using a more Americanized form of their name, may have helped the Erdmanns appear more American and more patriotic. Contributing two men to the war effort was another way of deflecting antagonism.

GÜNEY, Ülkü. 2015. “German Ethnic Identity in Chicago Before and During the First World War.” Journal of Faculty of Letters / Edebiyat Fakultesi Dergisi 32 (1): 151–62. http://search.ebscohost.com.pioproxy.carrollu.edu/login.aspx?direct=true&AuthType=cookie,ip,cpid&custid=s6222004&db=hlh&AN=109277552&site=ehost-live&scope=site.