Lynde Point Light has aided vessels navigate in and out of the Connecticut River and Old Saybrook Harbor since 1803. Listed on the National Register of Historic Places, it was built in 1839, replacing the first one—a wooden structure that just 35 feet tall—built in 1803. The lighthouse is built out of brownstones, has eight sides, and is 65 feet tall (71 feet above the water). It is under the jurisdiction of the U.S. Coast Guard and the light itself is an active navigational aid. The public cannot go inside the lighthouse but it is visible from the road that leads to it (this road may be closed to the public as well, however).

Lynde Point Lighthouse was built in 1839 and is still an active navigational aid operated by the U.S. Coast Guard. 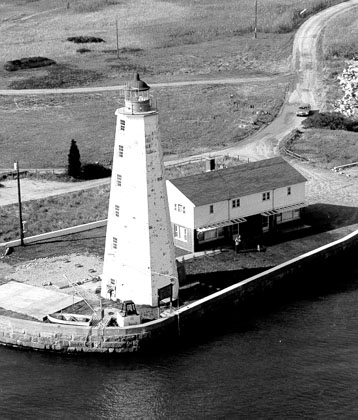