The Battle of Fort Blair, sometimes called the Fort Baxter Massacre, or the Battle of Baxter Springs, was a minor battle of the American Civil War, fought on October 6, 1863, near the present-day town of Baxter Springs, Kansas. In late 1863, Quantrill's Raiders, a large Confederate guerrilla band, was traveling south through Kansas along the Texas Road to winter in Texas. Numbering about 300, this group captured and killed two Union teamsters who had come from a small Federal Army post called Fort Blair 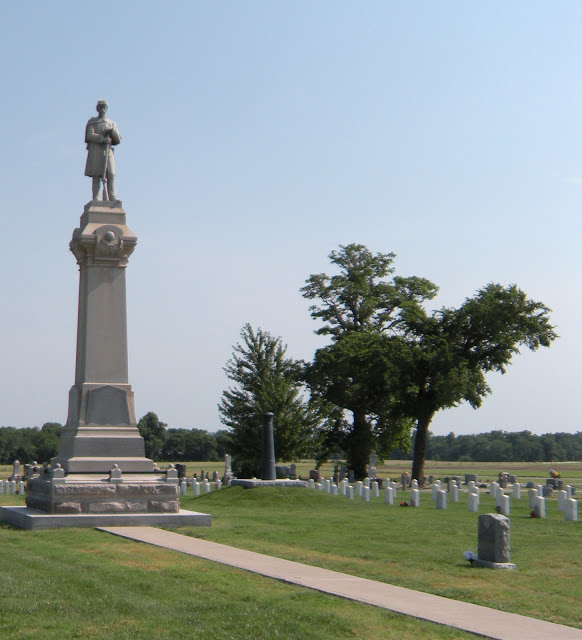 Taking the Federals by surprise, Quantrill's columnn killed most of the detachment, a total of 103 victims. The federal government originally planned to move the soldiers who died during the Battle of Baxter Springs to the Springfield National Cemetery, but the citizens of Baxter Springs started a petitioned to keep them in Baxter Springs. As part of the agreement to keep the burials in the city they donated land to the government and agreed to keep the graves in good order.

Union supporters called the killings a massacre; the conflict at Baxter Springs was characteristic of the vicious Kansas-Missouri border warfare. Fort Baxter was temporarily reinforced but by the end of 1863, the Union Army pulled its troops back to Fort Scott, which was better fortified. Before abandoning the fort, US forces demolished it and took away everything usable, to avoid its being used by the enemy.

Baxter Springs later developed as the first "cow town" in Kansas, a way station for cattle drives to markets and railroads further north. By 1875 it had a population estimated at 5,000