Red Sulphur Springs is the former site of a popular, grand, resort hotel which was built in 1832. The hotel was host to many wealthy visitors and the water form the springs were reputed to have curative value. The Springs were mentioned in several books authored by practicing physicians at the time. The hotel was occupied by both Confederate and Union troops during the civil War and was used as a hospital. The last owner of the hotel, while in operation was President Benjamin Harrison's Vice President, Levi P. Morton. 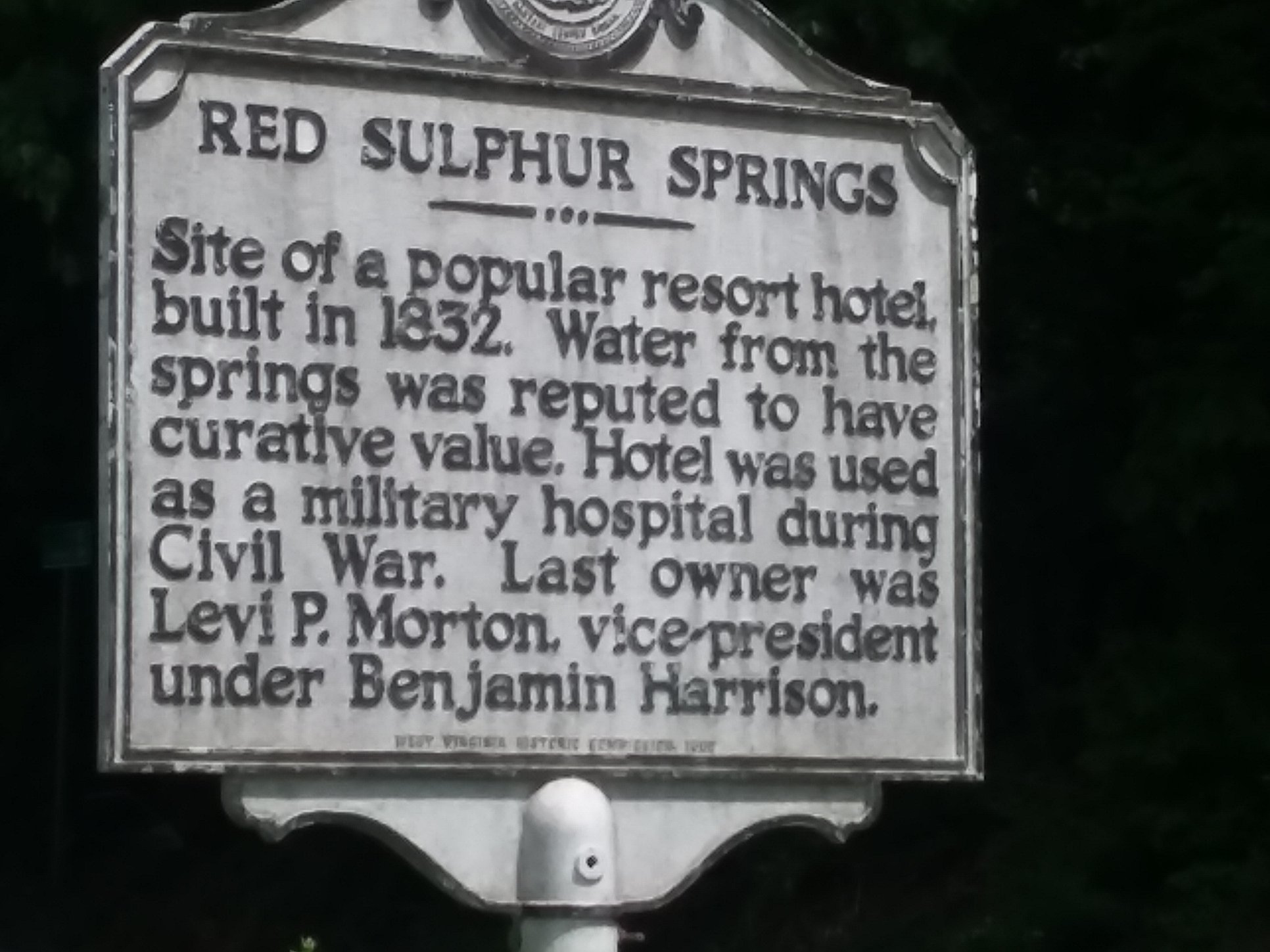 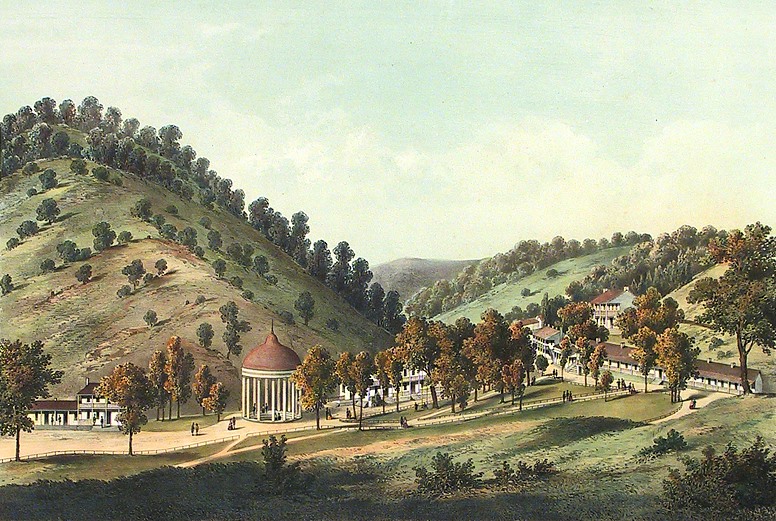 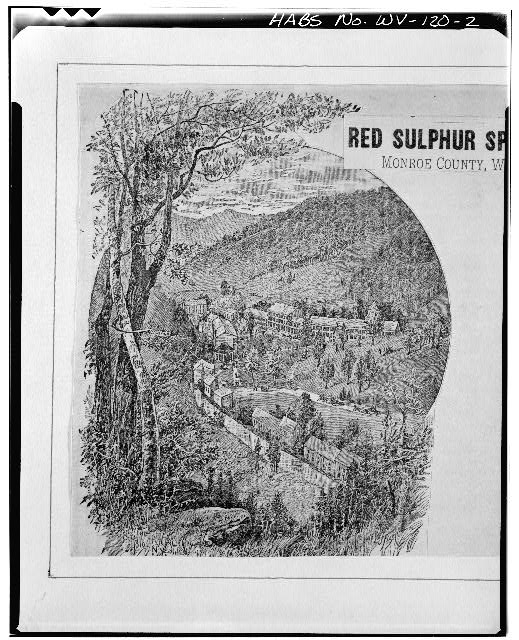 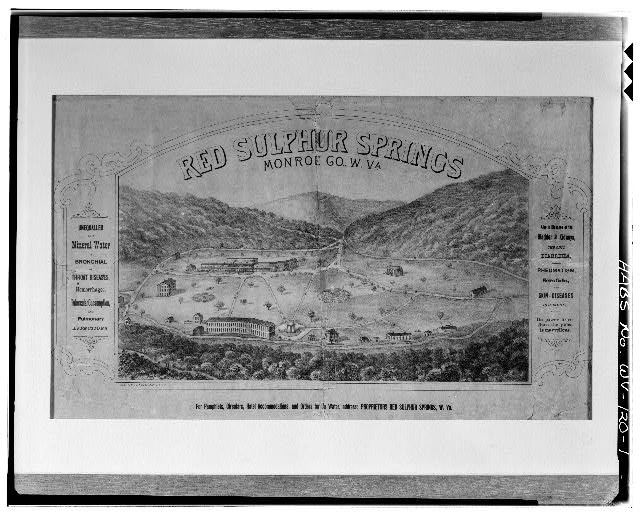 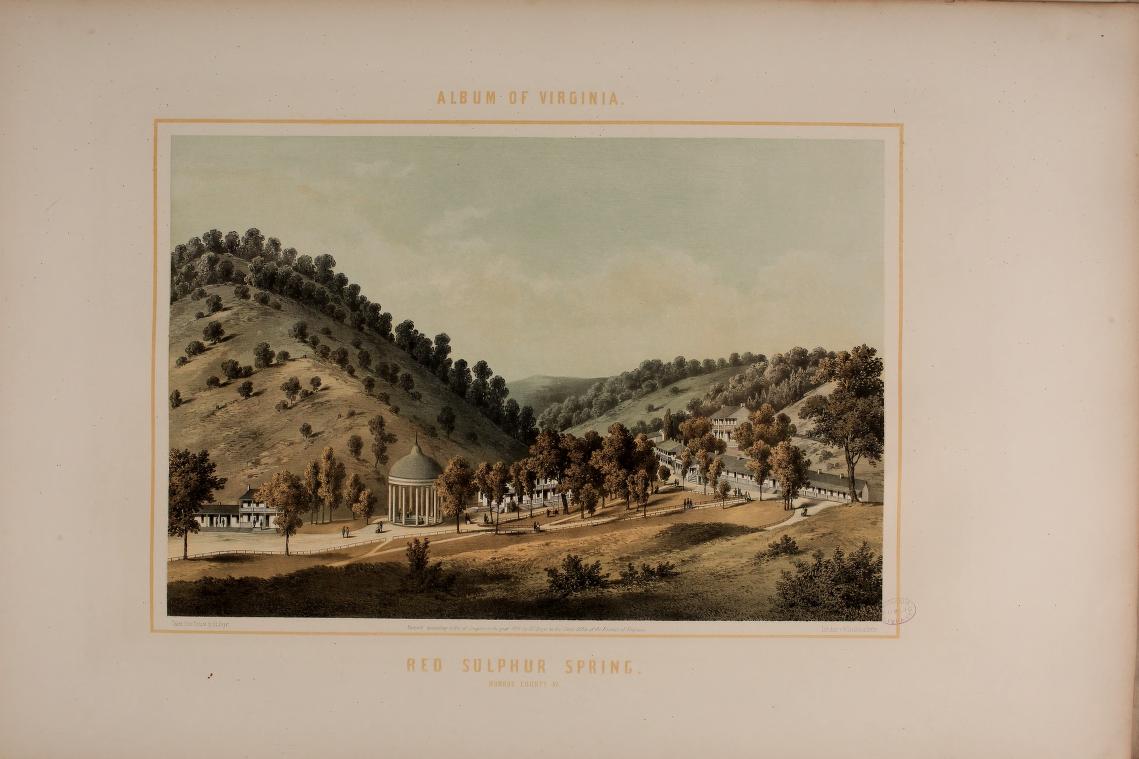 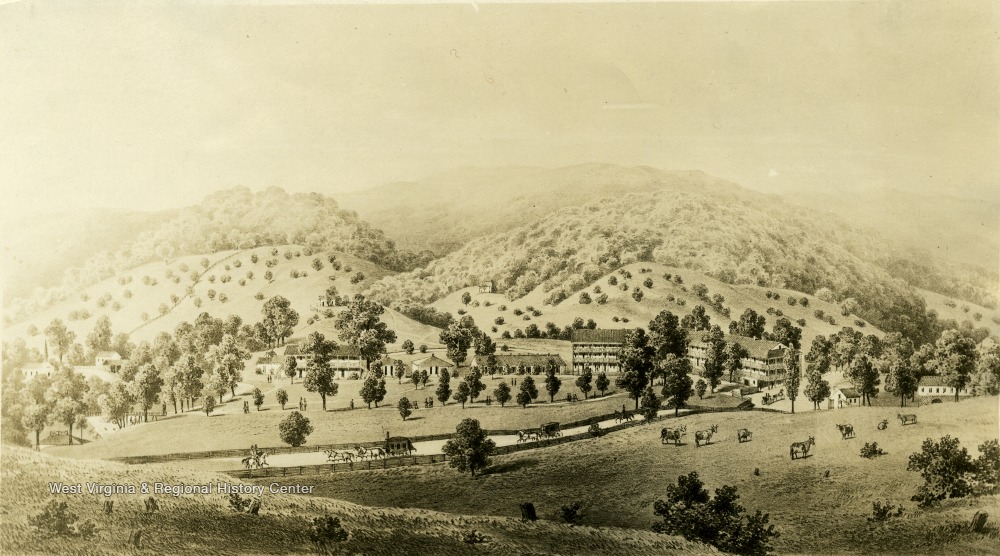 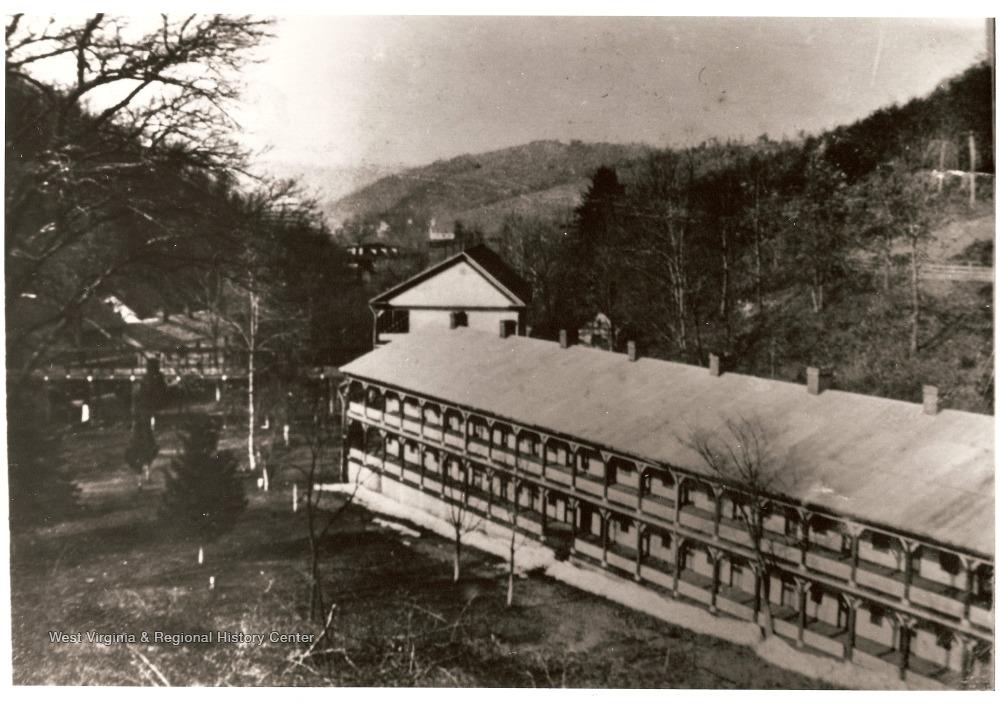 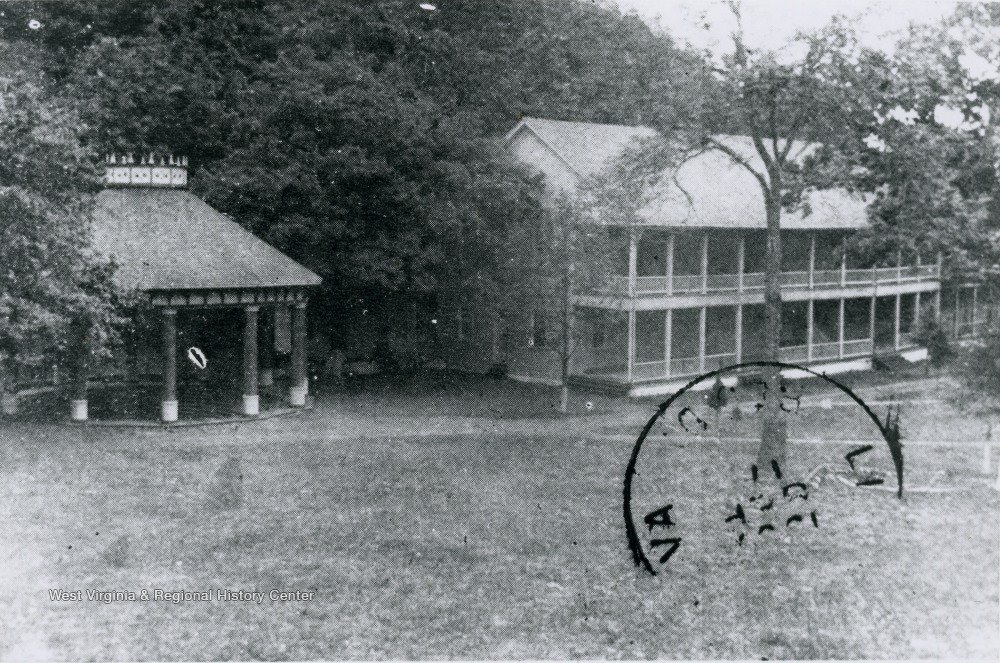 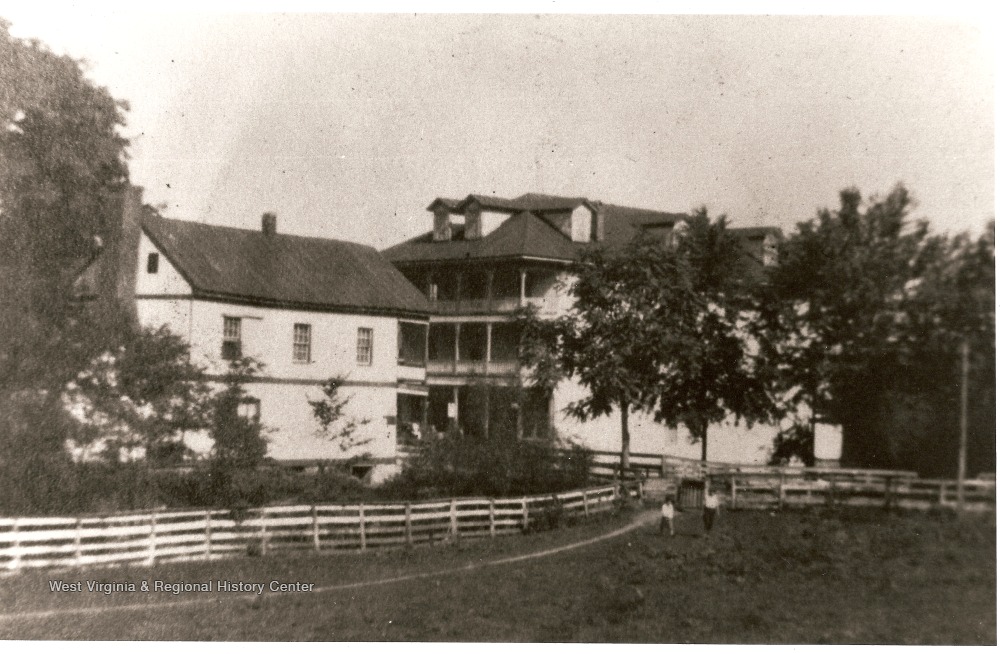 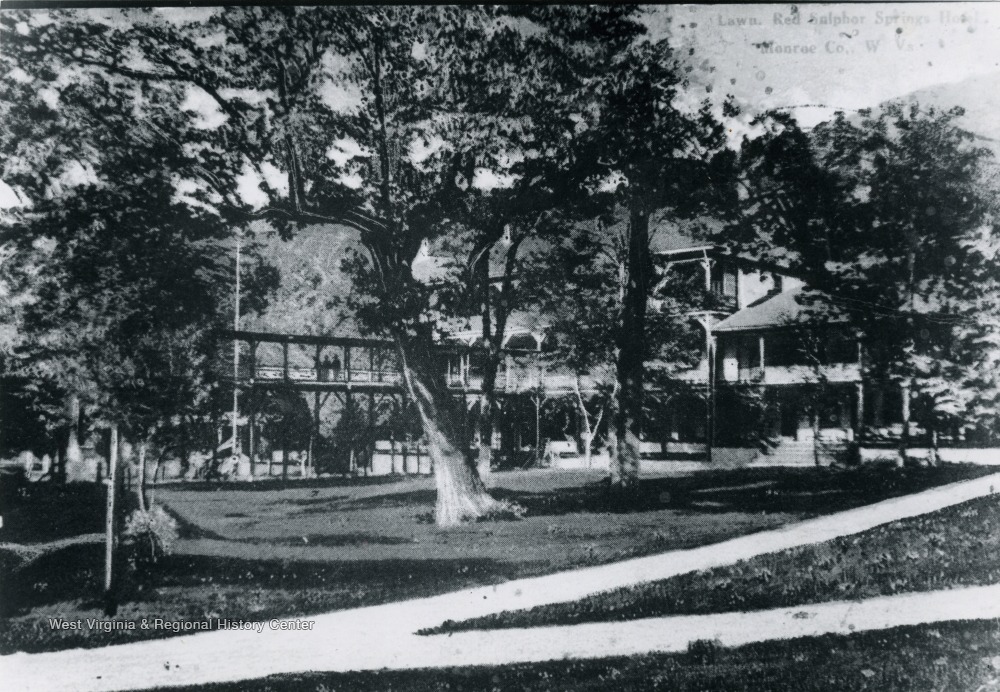 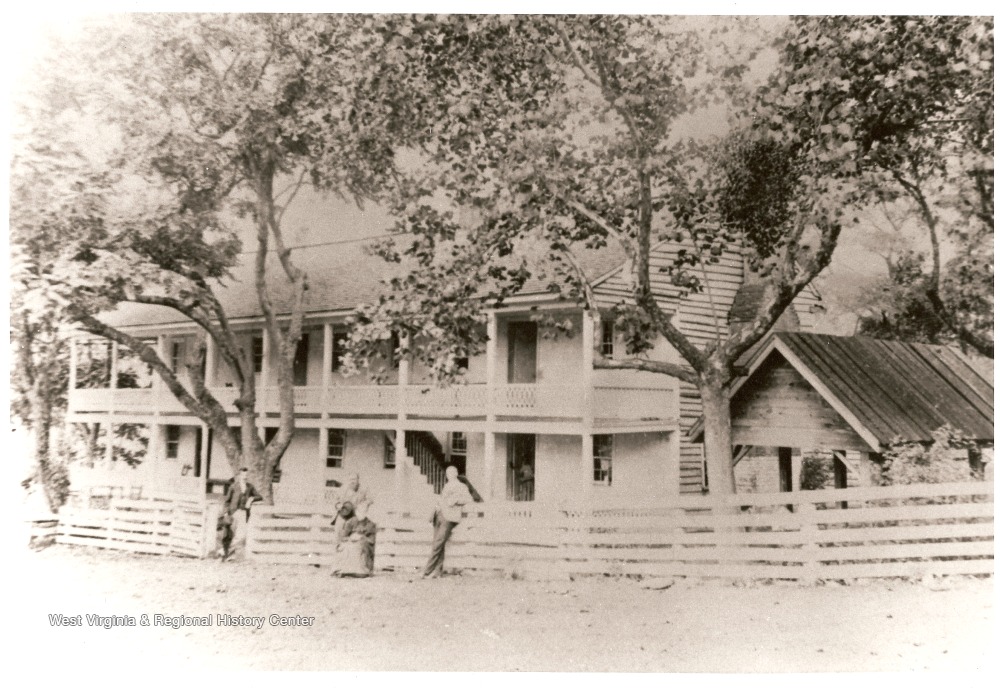 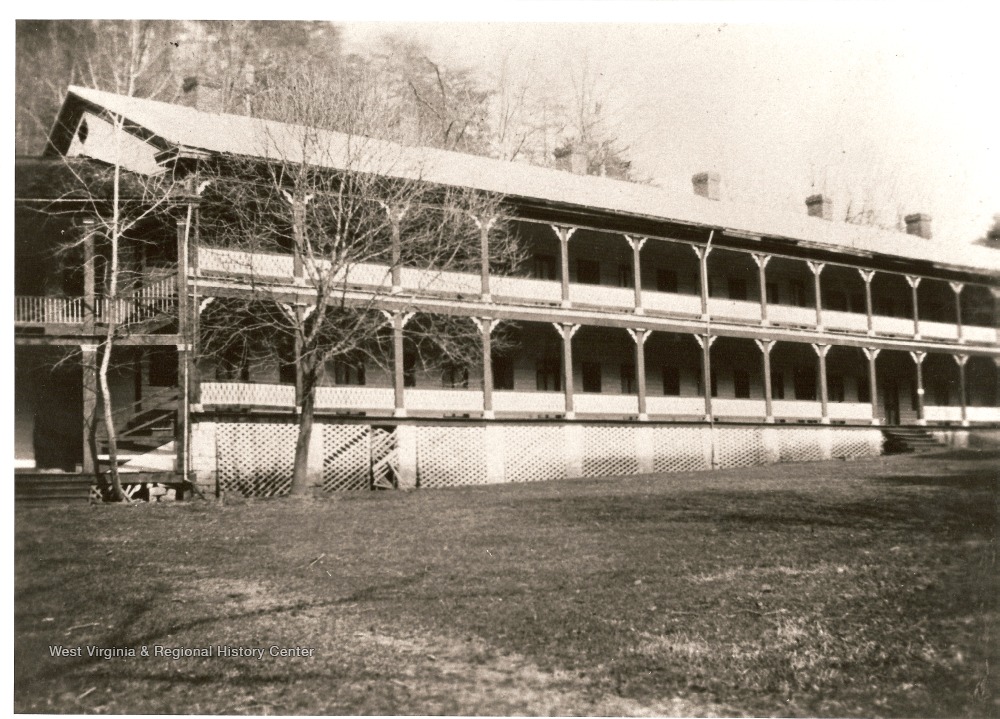 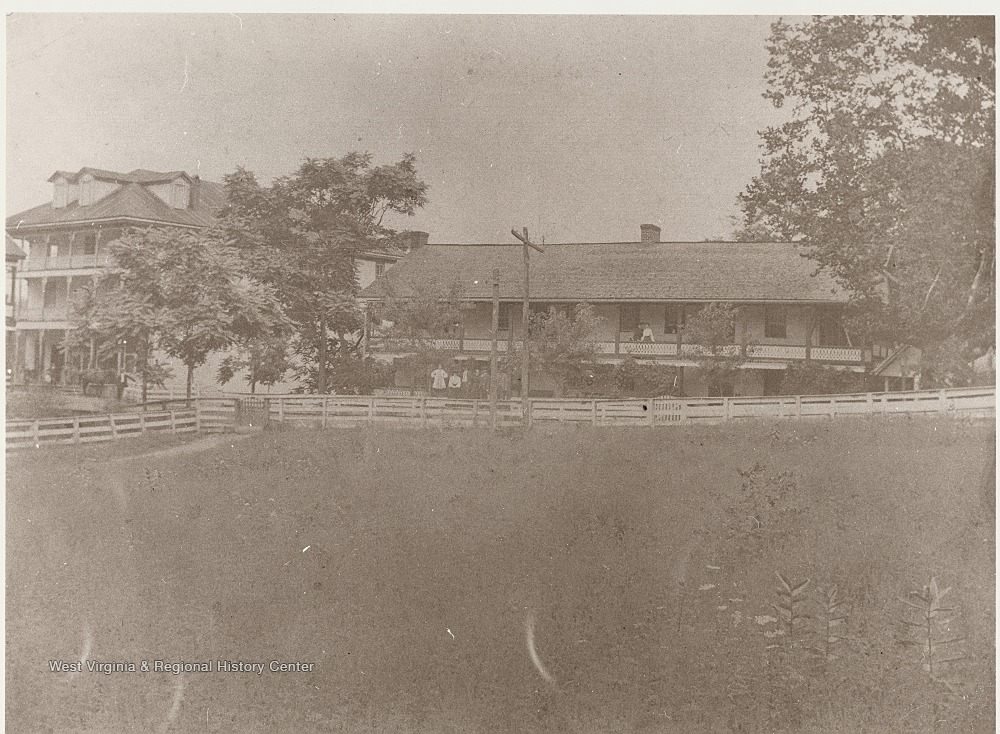 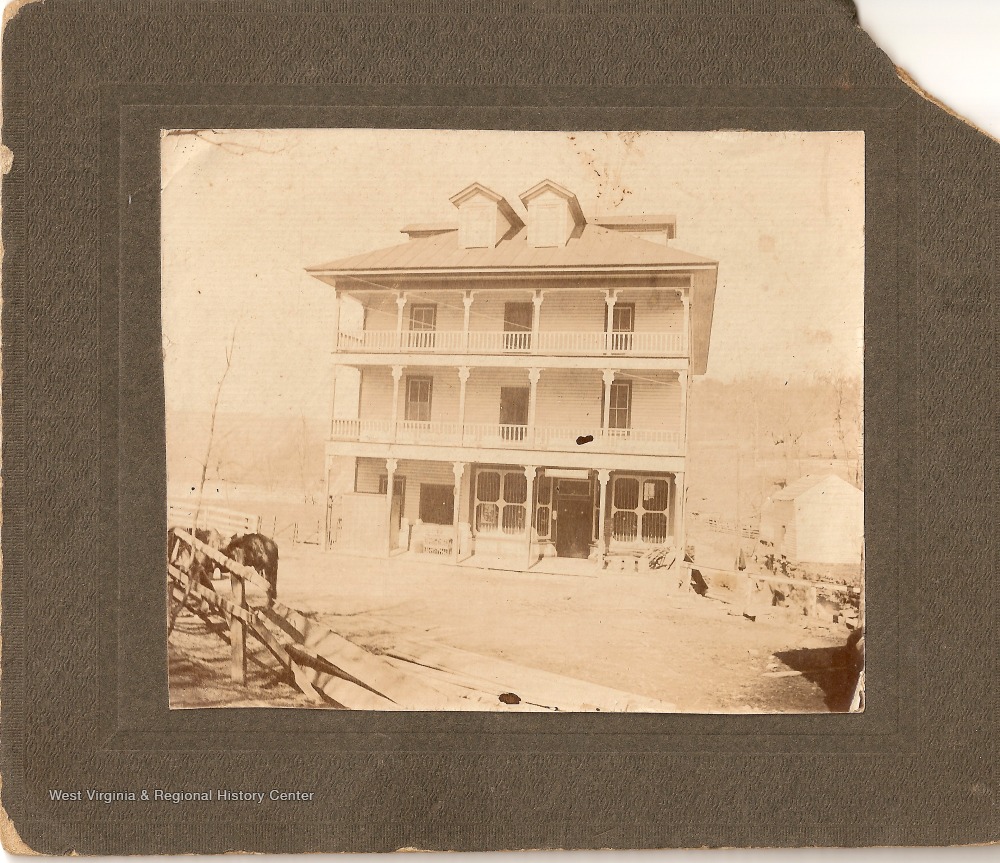 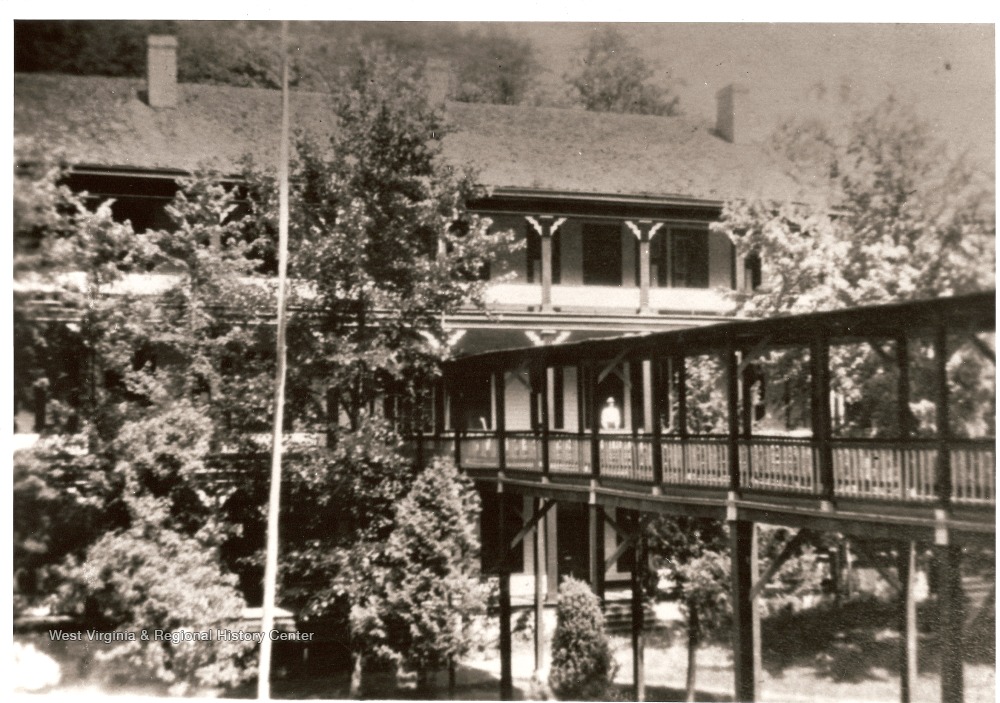 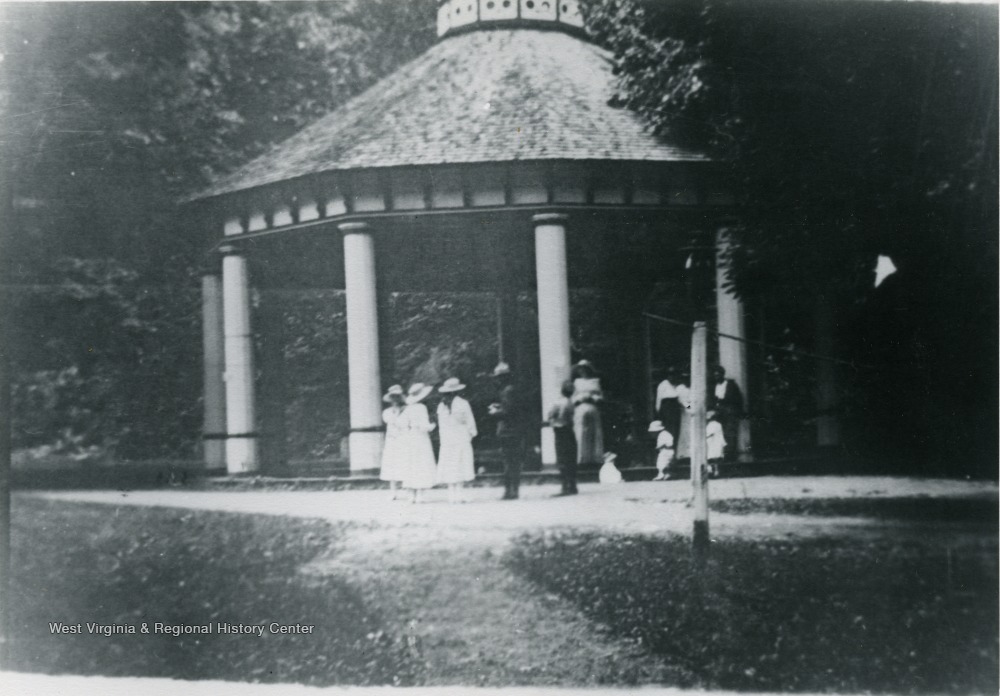 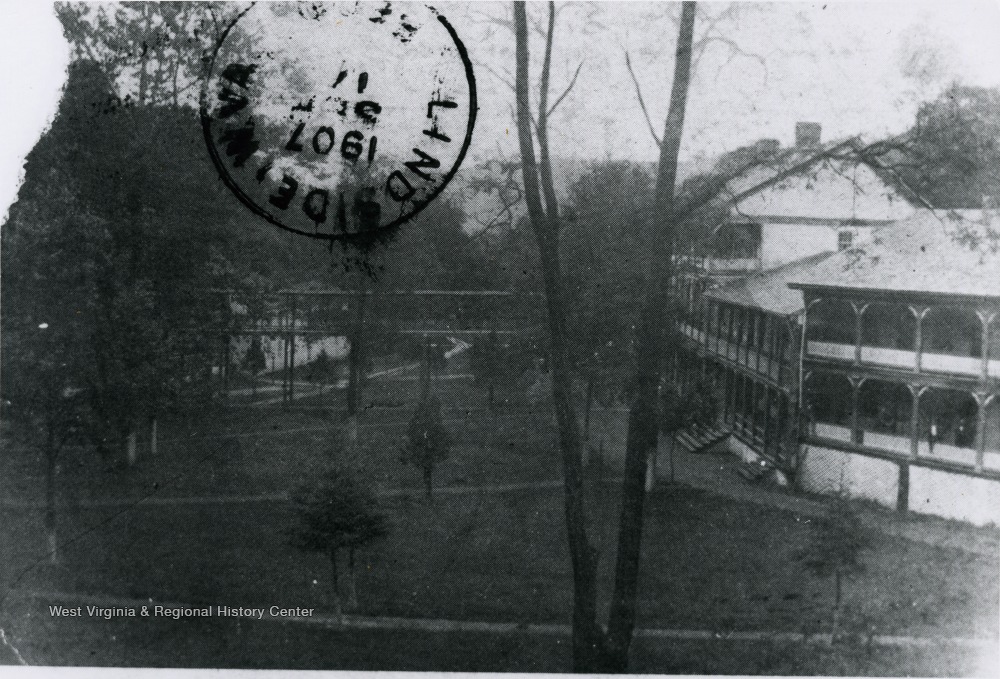 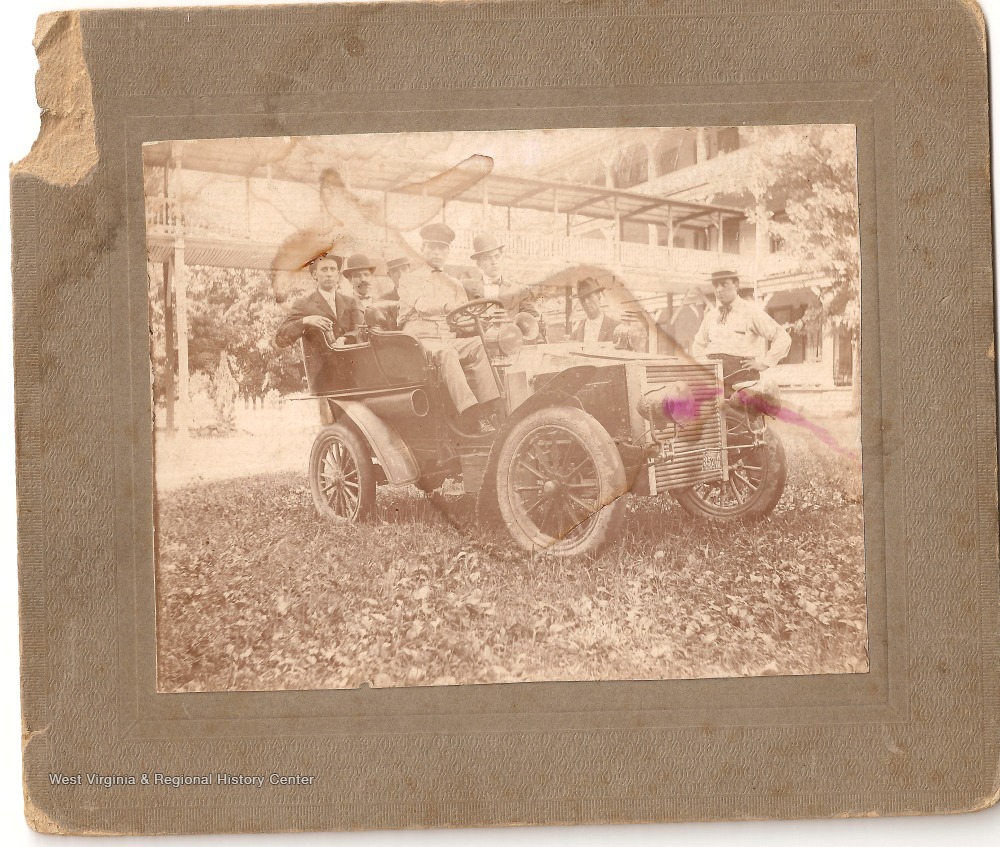 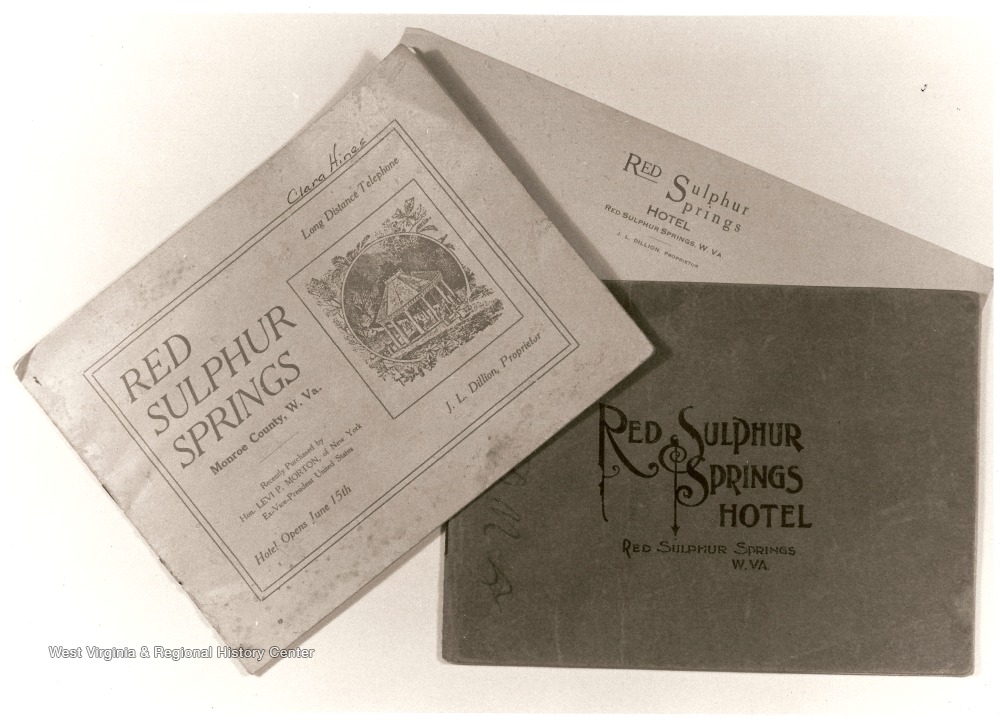 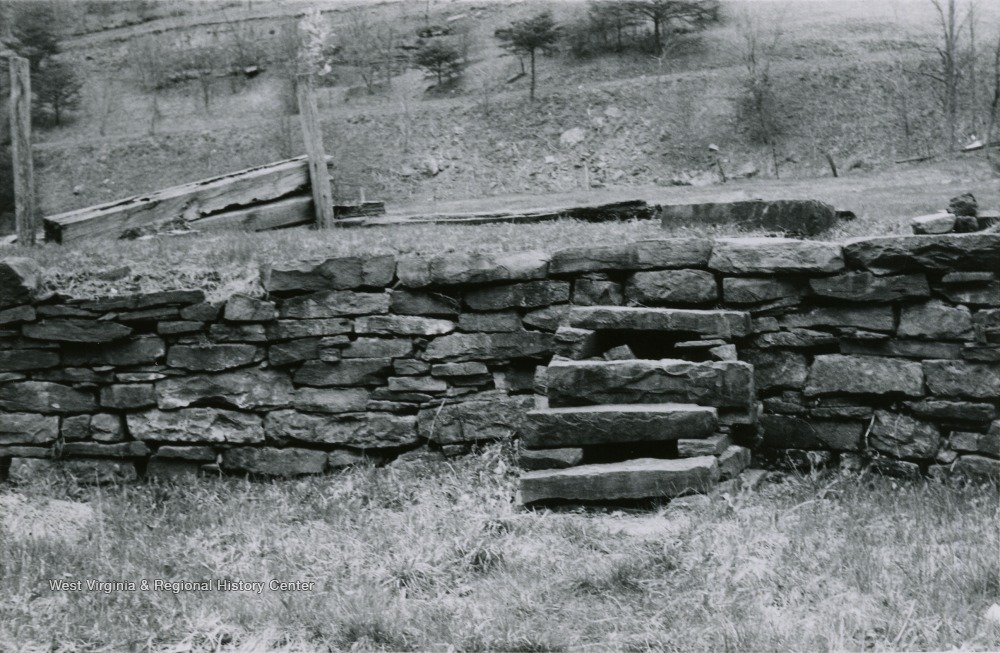 Red Sulphur Springs was a famous destination for far-traveling visitors, as far back as 1800. Like many similarly named places, it was believed that the water from these springs had some curative value for many ailments. They referred to this as "taking the waters" and it was of popular belief, at that time, that the springs could cure many ailments. The Red Sulphur Springs and Hotel is featured in a collection of historical exhibits published online by the University of Virginia. Entitled, Taking the Waters: 19th Century Medicinal Springs of Virginia, Red Sulphur Springs is written about in length, alongside Blue and White Sulphur Springs, and several other premier locations from the period. (1)

Several people wrote at length about the springs and their uses. One famous doctor from Richmond, VA, Dr. William Burke, first visited Red Sulphur Springs in 1829. He described the gorge where the springs are located as gloomy and having "only a rude shelter over the springs and several comfortless, windowless cabins when he first visited" (1). He purchased the springs in 1832 and made many improvements before surrendering possession of the property in 1841. In 1846, Burke wrote a book about the springs entitled, The Mineral Springs of Western Virginia (2), and approximately one third of the 394 page book, was on the Red Sulphur Springs. "By the time he wrote his book, the Red Sulphur was second only to the White Sulphur in terms of length of season, overall number of visitors, and the 350 people who could be accommodated at any given time in the hotel and the multiple ranges of beautiful buildings.(1)

Later, Burke wrote a second book of 24 pages entitled "Red Sulphur Springs, Monroe County, Virginia." (3) In this short pamphlet, the main topic of discussion was on the chemical properties of the waters and the perceived benefits from ingesting them. There was a worthy advertising campaign for the new owners, Thos. S. Campbell & Co. and he addressed some perceived "misconceptions" that he thought needed to be addressed. He attempted clarification, written in the introduction to the pamphlet. The doctor revealed that he visited the resort first as an invalid, annually until 1832, purchasing and making it his home until 1842, visiting and practicing thereafter. (Burke, 1860) (3)

Dr. Henry Huntt, physician to Presidents James Monroe, John Quincy Adams and Andrew Jackson, traveled form Washington D.C. to Red Sulphur in July 1837 in search of relief from his own ailments. In a book he penned about his visit, entitled: A Visit to the Red Sulphur Spring of Virginia (4), Dr. Huntt reported he drank the spring water, eventually increasing his consumption to 12 glasses per day. (2) After 3 weeks at the resort, returning home, he wrote that the use of the water led to the "manifest alleviation of the most pressing symptoms of my complaint". (2) According to the University of Virginia, even thought the doctor praised the benefits from drinking the water, he sadly passed away only a little more than a year later, on September 21, 1838 (1).

In 1848 Edward Beyer, a famous German landscape artist, and his wife traveled to America and after spending 6 years in New Jersey and Pennsylvania, embarked on a grand tour of Virginia where he spent 3 years sketching and painting rural scenes. After returning to Germany he published a book entitled Album of Virginia. Produced in Dresden and Berlin, the work consisted of 40 hand colored lithographic plates of Virginia views. Images include locations such as White Sulphur Springs Montgomery resort, the Virginia and Tennessee railroad tunnel near Shawville, Bullard Rock on the New River, the Salt Pond near Mountain Lake, Salt Sulphur Spring resort, Old Sweet Spring resort, Yellow Spring resort and Red Sulphur Springs resort. Sixteen of the forty images are of spring resorts. (5) (Glanville)

After the advent of the automobile, as roads were improved and as the springs drew more and more people in its most vibrant years, some famous political and social leaders visited the springs over the years. The fifth Chief Justice of the Supreme Court between 1836 and 1864, Roger Taney and Francis Scott Key, who wrote a poem later adapted into the Star Spangled Banner were a couple of notable figures. The NY Times wrote many articles about Red Sulphur Springs and drew attention to the mountainous resort. They mentioned the resort 2 days in a row in August of 1883. On August 27, 1883, they published an article entitled "The Red Sulphur Springs: Minister Morton's Hotel in the Happy Valley The Great Virginia Resort for people with weak lungs-- Climbing the Mountain Roads-- West Virginia Agriculture. The following day it published another article entitled "Around the Red Sulphur; The Virginia Mountains and Their People. The Old Days and the New--Tales of Stirring Times Befo' the Wa'--Some Distinguished Visitors." Between the 2 of these articles, The Red Sulphur Hotel was written about during the unknown author's visit to many resorts in the area. They boasted the springs as having been visited by the eighth President of the United States, Martin Van Buren, who was president between 1837 and 1841.
It could be said that the resort's most famous guests and it's most benefited use to health care came about during the Civil War. "The golden age of the Red Sulphur resort came before 1861" (Meador, 2012) In his article for the West Virginia Encyclopedia he states that the buildings on the grounds of the springs "were occupied by both armies" the north and the south. With future presidents being stationed in the area during the war, it wouldn't be surprising to learn that other political figures also stayed at the resort during war time.

Long after the war was over, Vice President to Benjamin Harrison, U. S. Vice President Levi Morton purchased the Springs and upgraded the facilities even further. He operated the resort successfully until 1915. However, the popularity of most of these types of springs evaporated over time and he ended up He then offered it to the state of West Virginia for use as a turberculosis sanitorium. They rejected the idea and he ended up selling the resort and the buildings were dismantled and the resort ceased operation (Meador, 2012).

The site is not recognizable as it once was in its heyday. As early as 1964, photographs were being recorded of the abandoned, demolished site. What remains were there in the sixties included a rock wall some stairways and the foundation for the pavilion. All that remains now is a few remnants of those structures which are literally in ruins.

4 Huntt, Henry. A Visit to the Red Sulphur Spring of Virginia. Boston, MA. Dutton and Wentworth, 1839. 4