The Ursuline Convent and girls school, located in modern day East Somerville, was created in a time where anti-catholic sentiments were prevalent. In the Protestant town surrounding the convent, rumors of mistreatment and abuse circulated, feeding hate of an already untrusted group. On the night of August 11th, 1834, this rage boiled over as a mob of angry Protestants stormed, pillaged, and set fire to the convent. None of the rioters ever truly faced justice for the crimes committed that night. In the end, the convent was never rebuilt or paid restitution. 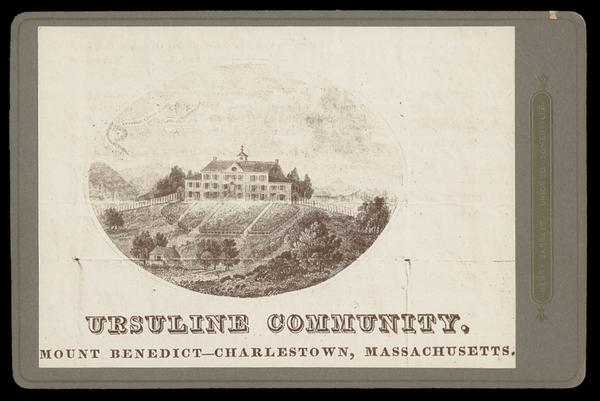 Drawing of the convent burning due to the riots 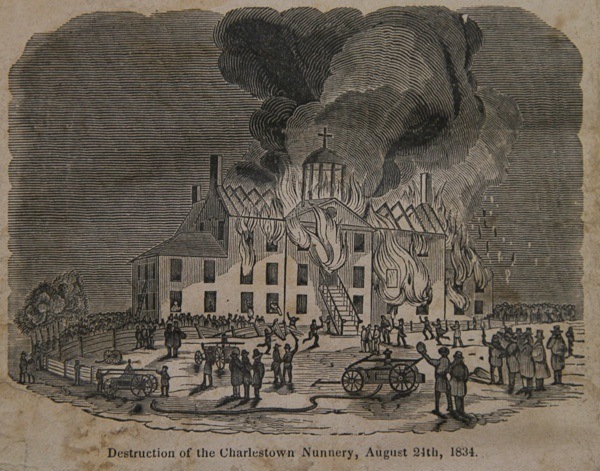 Sketch of the ruins by Benjamin DeCosta 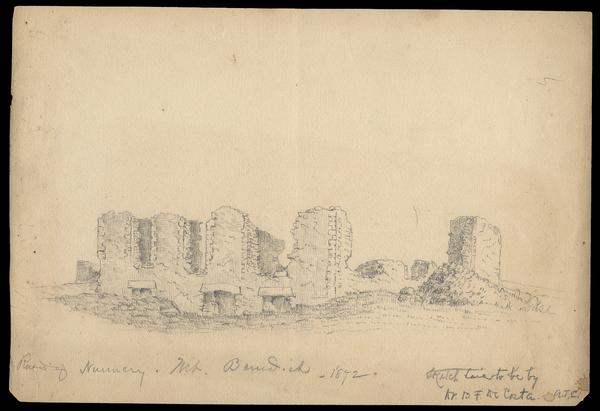 During the 19th century, there was a culture of intolerance towards Catholicism. The predominantly Protestant town of Boston viewed the new influx of Catholic Irish immigrants as both as an economic and religious threat. This intolerance is what lead many of the first Catholic priests, such as Father John Thayer, to dream of establishing a catholic school of their own. This dream was realized in 1828, after Thayers death, when the Ursuline Convent and girls school was established on Ploughed Hill.

The Ursuline school taught offered an education similar to what was then only available at boys’ schools. For this reason, many wealthy protestants sent their daughters to this school alongside the catholic girls the school was attended for. However, this only created more tension between the convent and the surrounding town. Rumors began to spread about the immoral happenings of the convent. Suspicions of forced conversions, inhumane punishments, and slavery of nuns helped to fuel the already present anti-Catholic views. Rebecca Reed, a former student, wrote Six Months in a Convent, detailing her time at the school. In it she described the convent as a prison, both for the students and the nuns, and various forms of barbaric acts the nuns forced the students to do. While the book was not released until after the fire, a manuscript was circulated to the local residents before its release.

All of the rumors and suspicions culminated on the night of August 11th, 1834. A group of angry protestants came the convent and demanded to see a  nun who was named in many of the rumors. When the mother superior refused, the mob began to create a bonfire of tar barrels and fences found on the convent ground. The rioters then then broke down windows and doors in order to ransack building. The nuns and students of the convent fled as the rioters set fire to the building. Firefighters were called, however, they did nothing to stop the fire. By morning, the entire building had burned to the ground.

After the dust settled, all of the nuns were cleared of any wrongdoing while teaching at the convent. Thirteen men in total were arrested for the rioting. Only one man was convicted of arson with the governor later pardoning him. While the nuns tried many times, the convent was never rebuilt due to being denied restitution on multiple occasions. Ultimately, many of the nuns to Canada for fear of their own safety and the remains of the convent laid untouched for forty years. After riots, Bishop Benedict Fenwick was inspired to create more Boston Catholic schools to continue on the school's legacy. Today, the Ursuline Convent is memorialized by a marker created by the Knights of Columbus near the East Somerville library as reminder of the unjust religious persecution of the Ursuline Convent.