After the Civil War ended in 1865, many soldiers had lost their lives in the conflict. To dedicate the memory of the people of Meigs County who had died in the fighting, a memorial was created. The statue is of a soldier sitting upon a stack of logs holding a rifle. Along the sides are the names of those Meigs County residents who sacrificed there lives during the war. 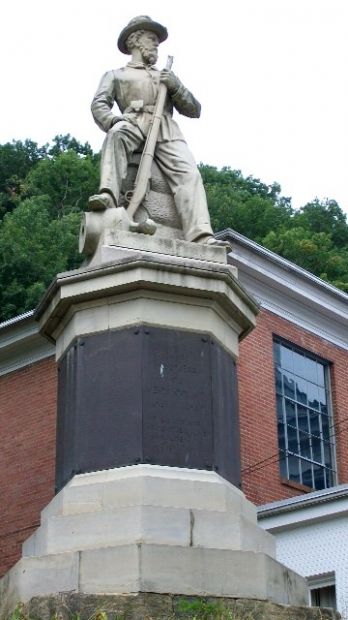 Over 600,000 soldiers were killed during the American Civil War.  In the years after the war, Pomeroy Ohio had built a statue as a memorial to all the lost soldiers from Meigs County.  In March 1870 the county commissioners declared, by petition of residents, that the land west of the courthouse and east of Mulberry St. would be "sacred purpose of erecting a monument to the memory of the soldiers of said county who died in the service of their country during the great rebellion.”

The statue is of a civil war soldier, presumably a Union soldier, sitting upon a stack of wood while holding a rifle.  The side panels are lists of the names of the soldiers who perished in the war.  In front of the statue is a Spanish cannon donated to the county from General S.W. Fountain in 1925.  Beside the cannon is a memorial bench also commemorating the lives of the soldiers.

The statue was completed in October 1871 with the unveiling happening later the same month.  Around 2,500 people attended the dedication ceremony.  This monument is one of the last original construction projects built in Pomeroy.  Economic decline has made it difficult for new construction projects.  The monument still stands today and is apart of the Pomeroy historic district.