In the early 1870s, Annie Chambers purchased an ornate mansion located on the Southwest corner of 3rd and Wyandotte. Here, she operated a house of prostitution until 1923. This area was one of several f Kansas City's Red Light districts and home to numerous houses of prostitution from the 1870s until the Progressive Era. However, none of these businesses were as successful or long-lived as the business of Madam Chambers. Known also as Annie Chambers and Leannah Loveless, Chambers was successful owing to her management skills which included navigating between police and politicians and creating a house of prostitution that felt elegant compared to her competition. It is said that Annie took in her girls and helped them when nobody else would and taught them to be classy, as she would say. The former mansion later served as a boarding house and part of a city mission before it was demolished in 1946.

Interior walkway of the Madam's house. 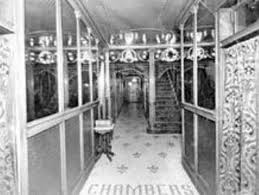 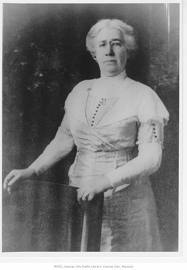 Madam Leannah Loveall was born near Lexington, Kentucky in 1842. In her teenage years, Annie and some friends decided to march in a parade to support Abraham Lincoln. Annie did this against her fathers' wishes and was kicked out of the home. She moved in with an aunt and finished school and later found work as a teacher. While employed as a teacher she met William Chambers, who was two times her age, and soon became pregnant. The couple lost that child and a second, and Annie became ill and woke from a coma to find that her husband had died in a severe railroading accident.

Annie went west to Indianapolis and found work along with more heartbreak, and soon she joins a friend in search of a new life in Kansas City. The two women arrive in 1869, the same year that Kansas City began to grow rapidly owing to the completion of a railroad bridge across the Missouri River. Annie and her friends make money working as prostitutes and soon take in other young women with nowhere else to turn. This led to quick profits and in 1872 Chambers is able to acquire this mansion on a prominent corner in downtown Kansas City, Kansas.

Madame Chambers' income grew tremendously and she furnished the home with the finest European antiques, and served fine wine, spirits, and cigars along with meals and illicit entertainment from gambling to prostitution. Throughout her years, Madame made ties with local businessmen, politicians, and even paid off the police who served more as a security force for Chambers than a police force that enforced the laws against her trade. During the Progressive Era, however, more politicians promised to clean up of the red light district but Chambers was able to stay in business until 1923. In that year, she converted to Christianity and closed her business but also provided interviews that have helped historians better understand the relationship between prostitution and larger themes in American history. Upon her death in 1935, Chambers left the mansion and most of her wealth to the City Union Mission.