1968 hammered bronze monument to Arizona’s white female settlers. It was erected by the local chapter of the Daughters of Utah Pioneers. The monument’s interpretive plaque masks its Mormon roots. 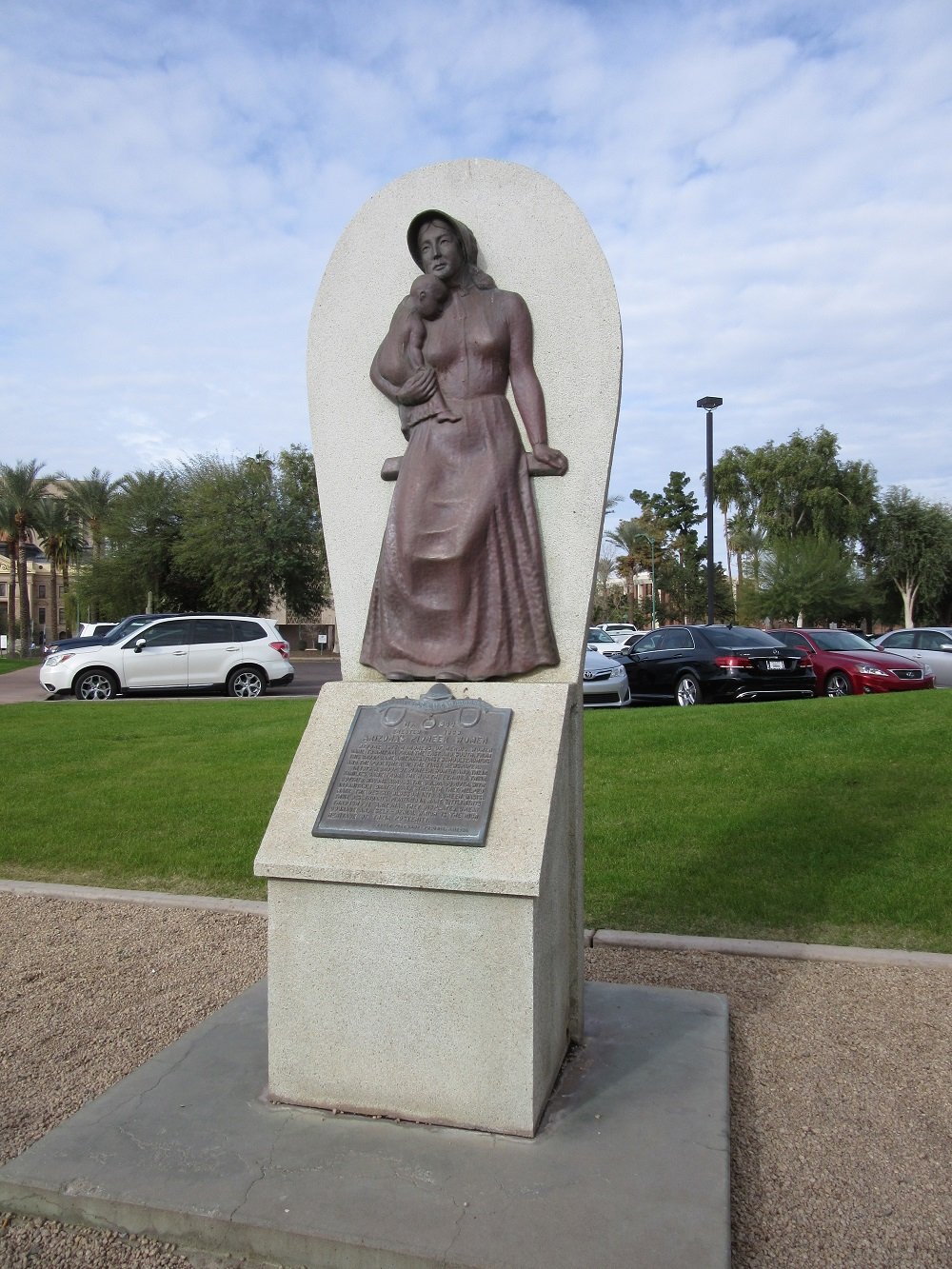 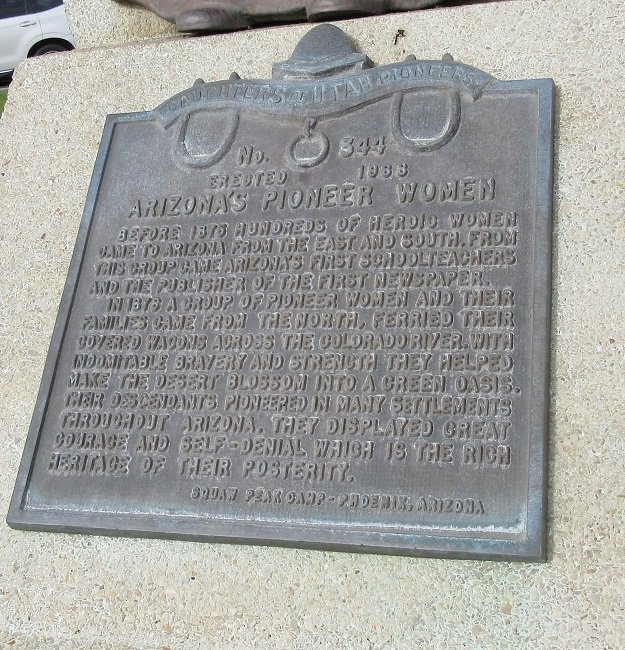 This hammered copper deep relief of a pioneer mother and child stands on a cast stone base in Wesley Bolin Plaza. Charles B. Martin, an illustrator in the City Planning Department and amateur sculptor, created the sculpture. The local Squaw Peak Camp of the Daughters of Utah Pioneers (DUP), a Mormon women’s group, commissioned the statue.

In the early 1960s, DUP headquarters in Utah asked the Squaw Peak Camp to erect a marker on a historical spot in the Phoenix area. They considered marking the site of Phoenix’s first school building, its first flour mill, or its earliest daily newspaper. But they ultimately chose instead to put of a statue honoring Arizona female settlers at the state capitol.

The Squaw Peak Camp women wanted the statue to honor all pioneer women. The DUP headquarters and the National Markers Association, of which the DUP was a member, wanted the interpretive plaque to include specific names. But local coordinators “were afraid, in naming women who pioneered in Arizona, that we might leave someone out.”1 They selected general wording that highlights a few prominent women’s contributions but credits “all those intrepid women who helped push Arizona into statehood.”2 The plaque text honors “hundreds of heroic women [who] came to Arizona from the east and south. From this group came Arizona’s first schoolteachers and the publisher of the first newspaper.”

The pioneer women of Arizona whom we are honoring today with this lovely monument were [constantly] in fear of their lives and the lives of their husbands and children because of these two foes, the [Apache] Indians and the renegades [who were] ... looking for a place without government or justice.

The local DUP women who commissioned the statue also masked the monument’s Mormon roots. Two-thirds of the interpretive plaque text celebrates the bravery of women who arrived from the north and helped transform the desert into a “green oasis,” without identifying those women as Mormons. At the statue’s dedication, Neoma Brinhall similarly declared that “Arizona was settled by God fearing people, Protestants, Catholics, Jews, and last but not least the Mormons.”

Nearby Mesa’s 1988 monument honoring Mesa Pioneers makes a similar move, highlighting the role of Mormons in establishing white settlements in the area without directly invoking their membership in the Church of Jesus Christ of Latter-day Saints.

State officials joined DUP members in dedicating the monument in Legislative Government Mall, adjacent to the Arizona state capitol. Governor Jack Williams selected the location for the monument. Mrs. Grady Gammage, chair of the Goveronor’s Commission on the Status of Women, spoke at its 1968 dedication.

Today, it is one of 30 memorials located in Wesley Bolin Plaza.