Statue of King Kamehameha the Great

This state of Kamehameha the Great statue was almost lost due to an 1883 shipwreck but was recovered and now stands in honor of the leader who united the Hawaiian Islands into a single kingdom in 1810. The statue is located near Kamehameha's birthplace.

The statue was commissioned by the King of Hawaii in the 1880s and is located where the island's first great king was born. 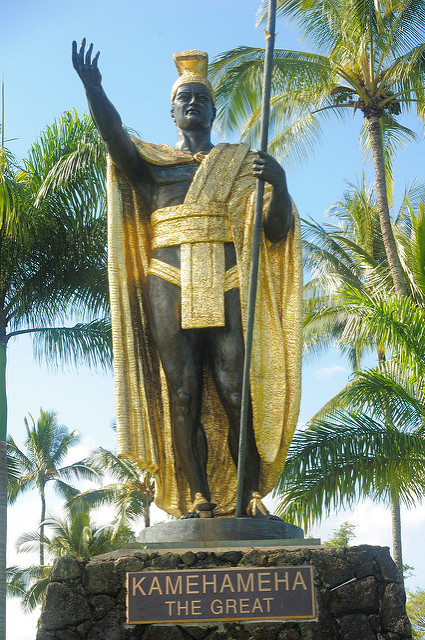 This is the second statue located in front of the Iolani Palace in Honolulu. This photo is taken after the Hawaiian people have placed lei onto the statue to celebrate the June 11 holiday. 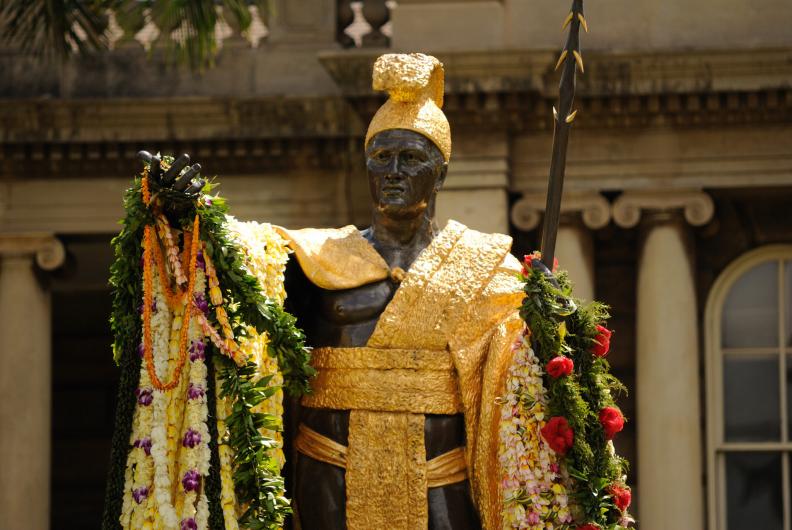 This statue was commissioned by Hawai's last king, Kalākaua, but thought lost after the ship that was carrying it wrecked near the Falkland Islands. The statue was missing for a short while before it had been recovered, and in that time, a second statue was commissioned and shipped to Hawaii. The second statue, a replica of this one that was assumed to be lost, is located across from the Iolani Palace in Honolulu. Each year, on June 11, the people of Hawaii celebrate Kamehameha by placing lei on this and several of statues of the first monarch.

The history of Kamehameha's rise to power was made possible by his use of Western weaponry and tactics but also likely saved the Hawaiin islands from being conquered by people of European descent. By securing power and uniting the islands, Hawaii was an independent kingdom for nearly a century. The leader's birth name was Paiea, but today he is known as King Kamehameha The Great. His name means "the lonely one"  and he is widely regarded among native and adopted residents of Hawaii.

Kamehameha was born into a rural family and spent his life learning how to become a district leader and warrior. As a boy, he was educated in culture, navigation skills, and warfare. After the death Kalaniʻōpuʻu-a-Kaiamamao in 1782, the larger islands were ruled by competing monarchs Kamehameha and Kiwalao. The rise of Kamehameha made it possible for the residents of the island to control trade and prevent Europeans from exploiting the islands. Hawaii remained independent until a series of coups supported by American business interests in the 1890s led to annexation and eventual statehood.

“Kamehameha I.” Architect of the Capitol, www.aoc.gov/art/national-statuary-hall-collection/kamehameha-i.