During the Civil War, this site was home to a tobacco processing facility that was converted into a prison complex. From 1882 to 1865, Libby Prison housed United States soldiers who had been captured by the armies of the Confederate States of America. The prison was plagued by overpopulation and food shortages throughout the war, and is best-known for an escape led by prisoners in 1864. In that escape attempt, 109 prisoners managed to escape the walls of the prison complex and 59 eventually reached Union lines. Soon after that event, Judson Kilpatrick hosted a disastrous rescue attempt and in the aftermath, Confederate leaders filled the prison with explosives and threaten to destroy the facility and all of the prisoners if there was another escape attempt.

Image of Libby Prison while it was standing in Richmond, Virginia 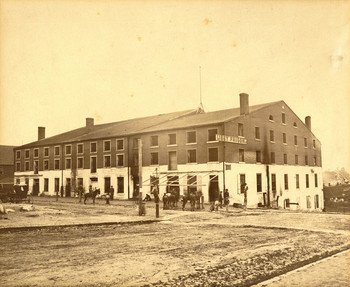 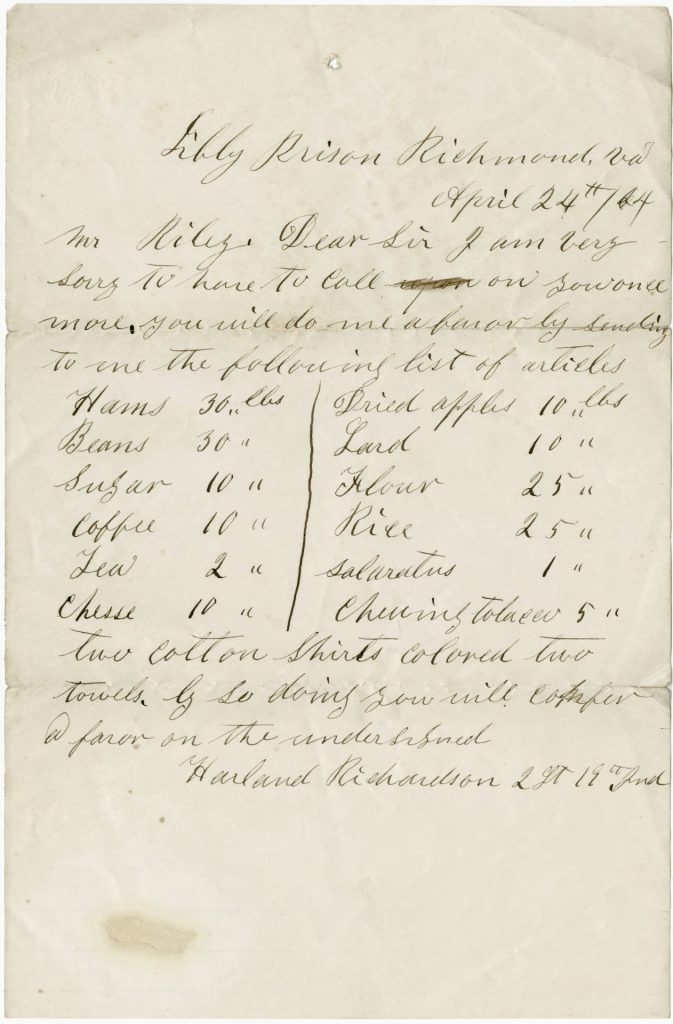 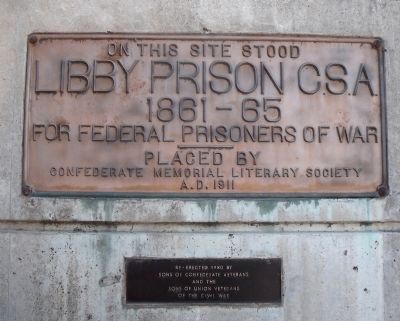 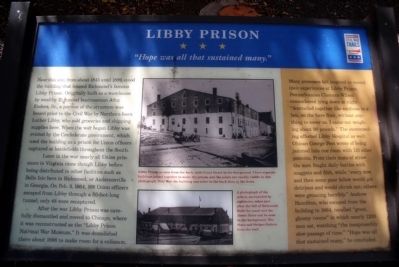 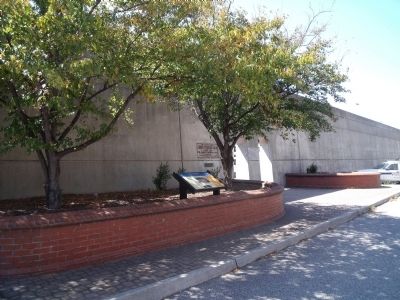 Located on the James River in Richmond, Virginia, Libby Prison was a three-building Confederate prison in operation from 1862 to 1865. Construction began between 1845-1852 as a tobacco plant built by John Enders Sr., who was killed during the building of one of his warehouses. After his death, Enders’ family leased the buildings to Luther Libby in 1854, who opened L. Libby & Sons selling shipping and grocery supplies. Following the First Battle of Manassas on July 21, 1861, Richmond became the center for Union prisoners and was soon difficult to secure, leading to Libby becoming a prison in March of 1862. The three buildings were connected by inner doors and were known as the East, Middle, and West buildings. Prisoners were confined to the upper two floors in only six rooms, with free access only to the kitchen on the first floor of Middle. On the first floor of East was the hospital, with offices and guardrooms in West; there was also a cellar for a carpenter shop and for housing slaves, as well as four cells for especially dangerous inmates.

Living conditions were exceptionally poor for both inmates and soldiers in Libby. With its establishment, there were 700 prisoners divided into those six rooms, with over 100 people in each cell. After the Seven Days’ Battles in June 1862, when it was designated to an officers-only facility, that number climbed, totaling around 1,000 inmates by the winter of 1863 due to exchanges between Union and Confederate armies nearly coming to a stop. Not only were there large food shortages for both inmates and guards, but prisoners were left exposed to the elements and disease. Instead of beds or blankets, they had a few benches measuring 105 by 45 feet. There were some small windows that let in very little light, only covered by bars that left people in the prison at the mercy of the summer heat or harsh winters. Prisoners were punished for small crimes, such as standing too close to the windows, sometimes being shot by guards.

The conditions at Libby Prison became propaganda for Northern opponents of Lincoln, who accused him of abandoning Union prisoners. On November 28, 1863, the New York Times printed the headline “Horrors of Richmond Prisons,” reporting diarrhea, dysentery, and typhoid pneumonia. Although the U.S. War Department sent food provisions, on account of a prisoner, a federal official claimed at least half was taken by the Confederate government to be sent to General Lee’s army. Soon after, on December 7, the Richmond Enquirer remarked “insolent imputation,” and the next day announced a feast in which inmates could “celebrate their captivity.” There is speculation as to how much this propaganda changed the history of what life inside the prison was like. For Union inmates who survived Libby, they would not be granted pensions unless they suffered injury or disease during their service, which led to a public relations campaign of sensationalistic memoirs of firsthand Libby “recollections.” However, when the U.S. granted universal pensions in 1890, the memoirs “virtually disappeared.” Some accounts, though, are recorded from inside the prison, as inmates published the Libby Chronicle in the summer of 1883, which was read aloud Friday mornings by its editor chaplain of 5th New York Cavalry Louis N. Beaudry.

In 1864, prisoners planned an escape. Conditions in the prison were being monitored by Elizabeth Van Lew, the director of the city’s Unionist spy network, who lived just a few blocks away. Richmond’s provost marshal John H. Winder, who was placed in charge of Richmond prisons in 1861, was planning to transfer inmates to Georgia, but had to wait as a new prison was being built in Macon, due to few prisons existing outside of the capitol and those that did being far from necessary provisions. While awaiting the possibility of transfer, he supplemented guard rotations with civilians and wounded Confederate soldiers, giving inmates the perfect opportunity for escape. After three previous failed attempts and several weeks spent digging a 50 to 60-foot tunnel from the cellar with chisels and a wooden spittoon, facing harsh conditions and giving the place the nickname “rat hell,” on February 9, 1864, 109 Union prisoners, organized by Colonel Thomas E. Rose of the 77th Pennsylvania Volunteers, made their way through the tunnel. 59 reached Union lines, possibly with assistance from Van Lew and her spies, while two men drowned in the James River and 48 were recaptured. Rose was among those captured, but was later exchanged.

On February 28, 1864, a rescue was attempted from outside the prison to free inmates from both Libby Prison and Belle Isle. It was led by H. Judson Kilpatrick and his protégé Ulric Dahlgren, though Dahlgren only had one leg. Ultimately, no prisoners were freed. Dahlgren was killed, and papers on his body suggested a larger mission of assassinating Confederate president Jefferson Davis. This caused Libby officials to dig a mine and fill it with 200 pounds of gunpowder, threatening to blow up the prison if anyone else tried to escape, a tactic that was officially approved by a committee for the Confederate Congress on March 3, 1865 even though such a murderous actions would have constituted a war crime.

In March of 1864, Confederate officials began transferring the prison population of Libby to Georgia, with enlisted men being sent to Andersonville and the officers housed at Libby going to the new Macon prison. Libby was used as a temporary place of confinement for the next year. Then, from April 3, 1865 to August 3, 1868, authorities used the prison to house former Confederates. In the 1880s, the establishment was dismantled and moved to Chicago as the Libby Prison War Museum from 1889-1895. Today, the site is bisected by the Richmond Flood Wall and has a historical marker to commemorate the prison.