Starting in the 17th century, Highland Park and New Brunswick were connected by a ford and then a toll ferry operated by John and Mary Inian. The first Albany Street Bridge was constructed out of wood in 1795 and replaced in 1853. The current stone bridge was built in 1893. The bridge would later be covered in concrete, though the original brickwork can be seen on the northern side of the bridge.

Improvements to the Lincoln Highway and Albany Street Bridge in 1925 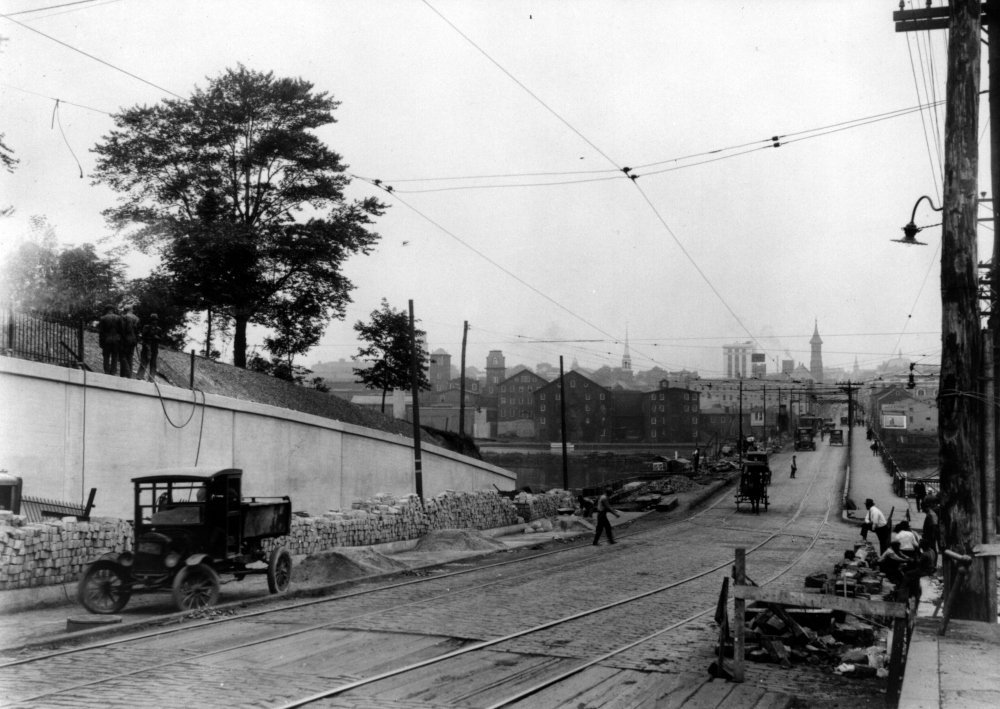 Postcard (ca. 1930) showing the Albany Street Bridge with the boathouse and trolley service. 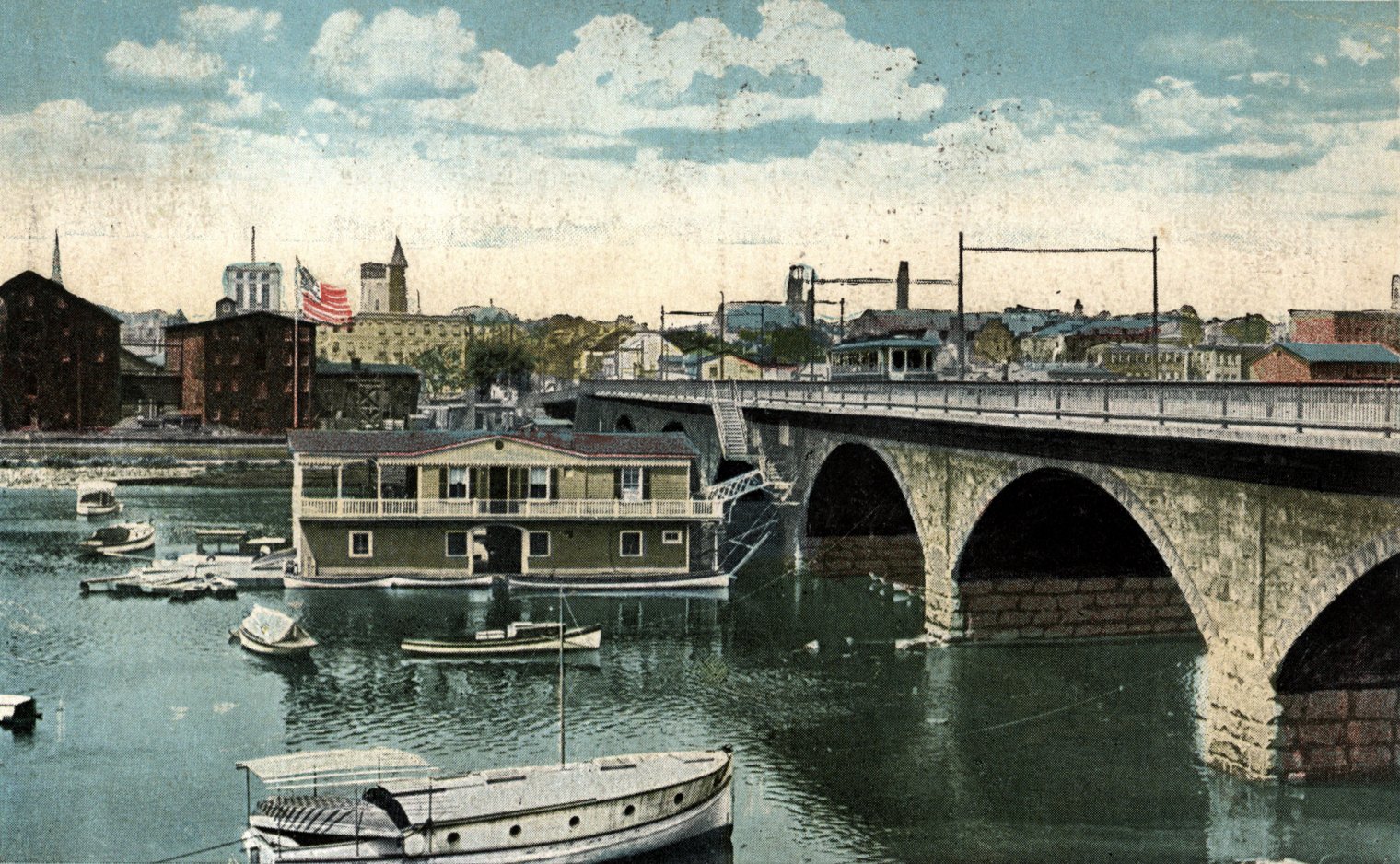 Throughout its history, Highland Park has benefited from a constant connection with New Brunswick. One of the first roads in New Jersey expanded a Native American foot and horse path that had passed through Highland Park well before European settlers arrived. By the middle of the 17th century, the Raritan River was forded at the shallows a couple of hundred yards upstream from where the Albany Street Bridge stands now.

Starting in the 1685, a toll ferry operated by John and Mary Inian ferried passengers over the river from a dock located near the current bridge. After the establishment of the ferry the main road through Highland Park was redirected to the site of the ferry’s launch and thus Main Street got its start. The few settlers of Highland Park, along with mail coaches and passengers on their way through to Philadelphia, Newark, or New York would make use of the ferry to New Brunswick, which continued to be operated by a succession of other proprietors after the Inians passed away in 1699. Additionally, throughout the existence of the ferry, there stood an inn at the foot of the Highland Park side of the ferry, which was also operated by these proprietors. In 1776, the crossing was the site of a skirmish between the retreating Continental Army and pursuing British troops.

By 1795, a critical group of local residents and New Brunswick businessmen sought permission from the New Jersey legislature to form the New Brunswick Bridge Company and constructed a bridge, collected tolls, and maintained and rebuilt the bridge when needed. The first bridge, a wooden structure resting on 13 large pillars, had room for two carriages to pass side by side and charged a toll comparable to the toll on Inian’s ferry. In time, the Albany Street Bridge proved expensive to maintain and fell into disrepair after the construction of a combined rail and pedestrian bridge between Highland Park and New Brunswick in 1837. The wooden Albany Street Bridge was dismantled on orders of the Middlesex County Grand Jury in September 1848.

The journey on the lower level of the rail bridge was fraught and uncomfortable, so a group of wealthy Highland Park and New Brunswick residents formed a commission to rebuild the Albany Street Bridge atop the piers left behind when the first bridge was dismantled. The resulting bridge was finished in 1853 and has existed continuously until today. The Albany Street Bridge was made toll free by Middlesex County when they purchased the bridge from the Bridge Company for $58,000 on July 3rd, 1875. In 1877 the bridge was whitewashed by New Brunswick prisoners and new pine planks were installed from Florida and Georgia.

The current stone bridge was built in 1893. The bridge would later be covered in concrete, but the original Brickwork can be seen on the northern side of the bridge. In 1914 Raritan Avenue was included on the path of the Lincoln Highway, which stretched from New York to San Francisco. Additional traffic from the Lincoln Highway, one of the most traveled routes in the country, benefited businesses in the borough, including a number of used and new car showrooms (114, 127, 438 Raritan Avenue) and gas stations. Wider streets and more traffic also led to more traffic accidents, and the mayor instituted a campaign against reckless driving in the 1920s. Despite the presence of policemen in white storm coats, there were 170 traffic accidents on Raritan Avenue in 1929. After traffic lights were installed that year there were only 56 accidents.

Starting in the 1870s, the Raritan Boat Club built and maintained a floating clubhouse tethered to the Albany Street Bridge. By the 1890s the boat club became firmly established and even held famous swimming races which featured nationally and internationally renowned swimmers.

From 1897 until the 1930s, a trolley passed through Highland Park on its way from Perth Amboy to New Brunswick. Rides were plentiful and fares cheap, and a local resident describes that the trolley ran frequently and capably. A newspaper article printed about the day of the trolley’s opening (Thanksgiving 1897) describes how some people who were “filled with too much of the liquid dressing that went with Thanksgiving day turkey” took short rides but were eventually put off. When the line was closed and replaced by regular bus service, the tracks were covered over, and when Raritan Avenue was paved over in 1978-1979, the tracks were dug up.