Now the location of a local community center called the Darien Community Association (DCA), this historic home—called Meadowlands—is a fine example of Georgian Revival architecture. It was built in 1932 by retired banker and broker James H. Stark, who purchased the property in 1929. It was actually erected on the foundations of a previous house originally built in 1875 (Stark tore this house down). Meadowlands, which is listed on the National Register of Historic Places, represents the shift from Queen Anne architecture, which was popular in the late 1800s, to more Classical, conservative architecture. The DCA was established in 1923 and has evolved to become an educational and philanthropic organization To this end, it offers a variety of programs, classes, and scholarships to local high school students. The building is available to rent for weddings and other events.

Meadowlands was built in 1932, replacing an earlier house erected in 1875. It is now the headquarters of the Darien Community Association. 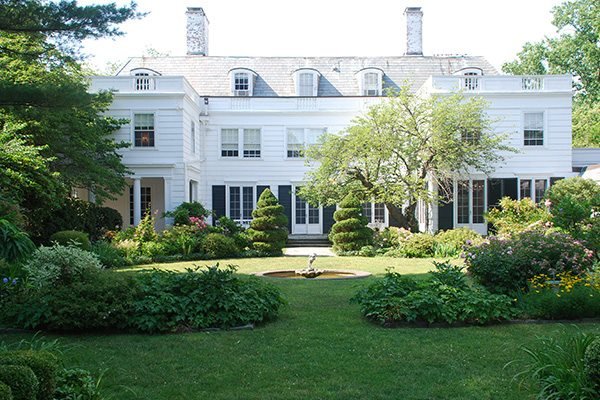 The DCA got its start when a group 20 women decided to form an organization whose purpose was to keep Danbury clean. The original name, the Darien Improvement Association, reflects this original purpose. Eventually, the mission grew to other areas including supporting home mail delivery, the library, and local schools. The group incorporated in 1929 and changed its name to the current in 1931. That same year, the DCA opened a thrift shop to employ women during the Great Depression. Volunteers  operate the store today, which is located at 996 Post Road. The DCA bought Meadowlands in 1950.