In this Artwork, the Prophet Muhammad peace be upon him is shown riding his human-headed steed, Buraq. Rainbow angels surround the Prophet Muhammad offering golden vessels. Among the angels is archangel Gabriel: holding a banner of green, the color associated with the Prophet, he leads Muhammad on his mystical journey. Earlier artworks reveal of the Prophet reveal his face, here he is shown with no face corresponding with iconography adopted at the beginning of the Safavid period, in the early 1500s.

Shah Mahmud Nishapuri created this image in1564 for the ruler of Iran Shah Tahmasb who ruled from (1524–76). Islam disapproves of all representation of humans or animals. The Prophet Muhammad is seen with no face as it is forbidden. 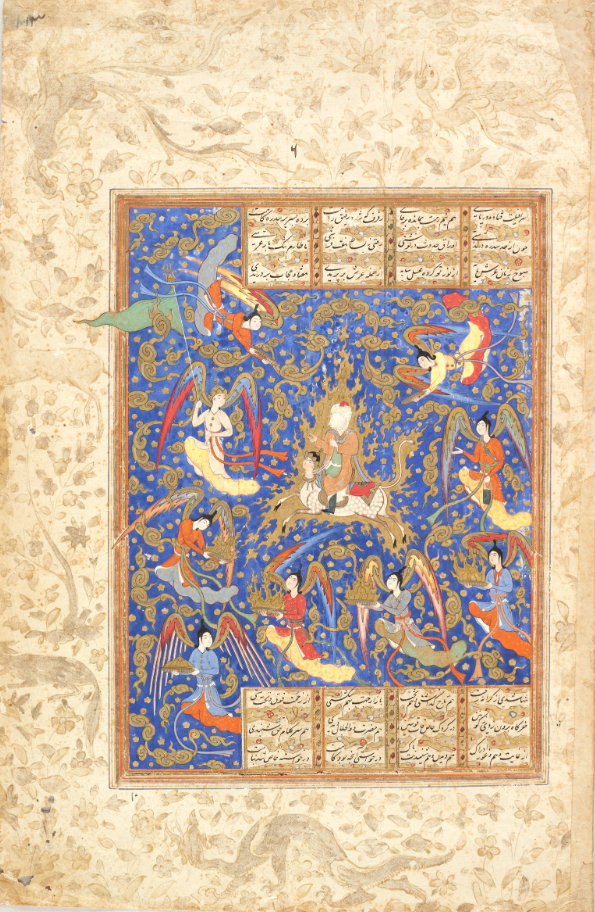 The names of the rulers who have owned this artwork that has been passed down since the early 1500s. 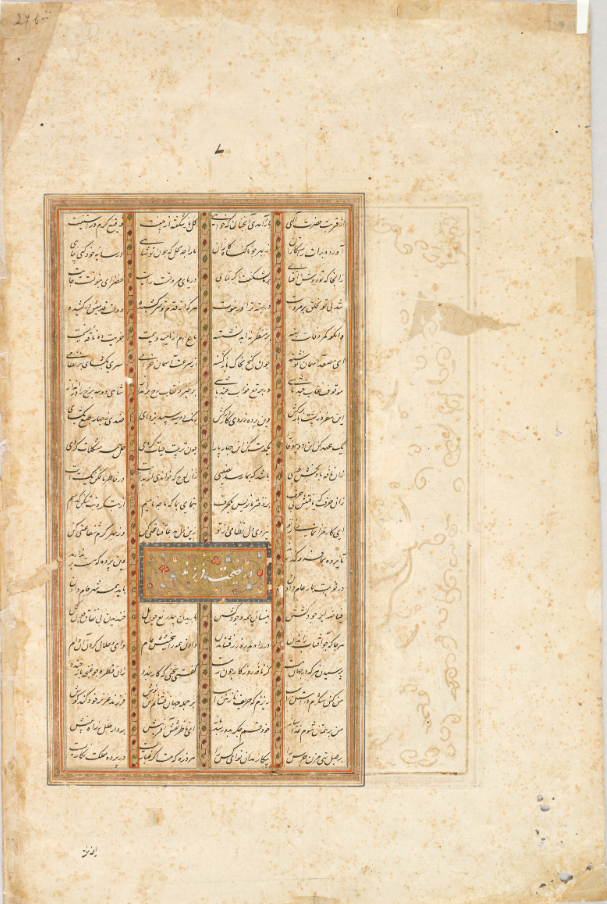 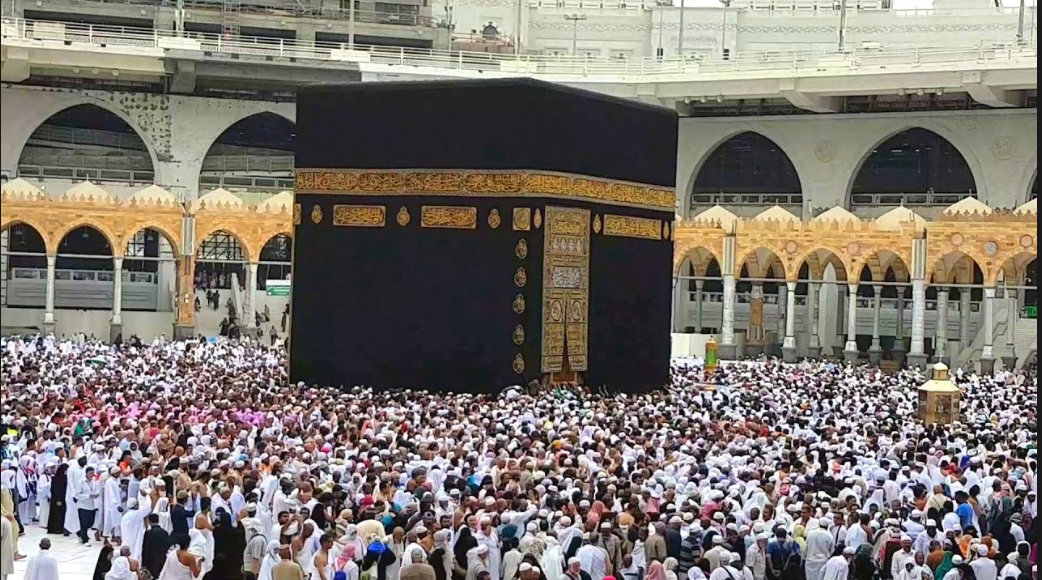 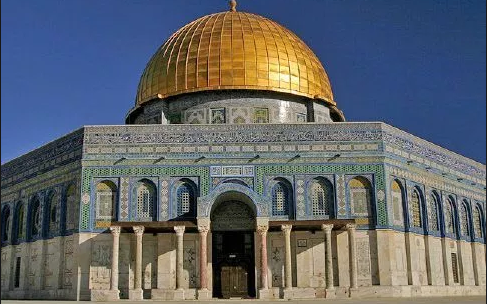 The story of the phenomenal night journey of the Prophet Muhammad is based on passages from the Qurʾan (17:1, 53:1–18, and 81:19–25), as well as later hadith (sayings of the Prophet Muhammad)  that describe his travel (isrāʾ ) from “the holy mosque” to “the farthest mosque” as well as his ascent to heaven (miʿrāj) and what he experienced there. Paintings of this event sometimes appear in illustrated manuscripts of Persian epic and romantic poetry, such as the Khamsa of Nizami (five poems), even though they are not directly related to the stories told in these work of art.

About Isra (Holy Mosque) and Miraj ( ascent to heaven)  it is being mentioned in Surah al-Isra. In Isra, the first part of the night, Jibrael came to the Prophet Muhammad (PBUH) and then he rode on the which is larger than a donkey and smaller than a mule. On Buraq, Prophet Muhammad traveled from Makkah (Masjid al-Haram) to Al-Aqsa Mosque in just a second, to be noted, the distance between these two destinations is 1239.45 KM and takes around 1 hour and 52 minutes if you travel from Airplane, but our Prophet Muhammad (PBUH) completed it in just a few seconds.

The exact date of this great event is still controversial:  Some scholars, including Imam At-Tabari, are of the opinion that the Night Journey occurred in the same year the Prophet (peace and blessings be upon him) received the first revelation. However, the context of Surat Al-Israa' suggested that it was revealed in a late time during the Makkah phase (Moon Phase). The Prophet (peace and blessings be upon him) was carried in body from the Sacred Mosque in Makkah to the Al-Aqsa Mosque in Jerusalem on a mount called Al-Buraq in the company of Angel Gabriel. There Prophet Muhammad led all the other prophets in prayer. After that Gabriel took him to the heavens.

When they reached the first heaven, Gabriel asked the guardian angel to open the first heaven's door. It was opened and Prophet Muhammad (peace be upon him) Adam, the forefather of humankind. The Prophet Muhammad saluted him. Adam welcomed him and expressed his faith in Muhammad's prophethood. The Prophet Muhammad saw on the right side of Adam the souls of those who will be happy in the hereafter and saw the souls of the doomed ones on his left. Gabriel then ascended with the Prophet (peace and blessings be upon him) to the second heaven and asked for opening the gate. There the Prophet Muhammad saw and saluted Prophets Yahya (John) and `Isa (Jesus). The same happened in each heaven: In the third heaven, the Prophet saw Prophet Yusuf (Joseph); in the fourth, Prophet Idris (Enoch); in the fifth, Prophet Harun (Aaron); in the sixth, Prophet Musa (Moses); and in the seventh, Prophet Ibrahim (Abraham) (peace and blessings be upon them all).

In the seventh heaven there Almighty Allah (God) established 50 daily prayers for him and his Muslim Ummah (nation). Prophet Musa (Moses) advised him to ask Allah (God) to reduce the number because the Muslim Ummah (nation) would not bear performing such a number of prayers. The Prophet Muhammad once more begged Allah to reduce the number further. He went again and again to Almighty Allah (God)  at the suggestion of Musa (Moses) till the prayers were reduced to five only.  Again, Musa (Moses) asked him to implore for more reduction, but the Prophet said,  "I feel embarrassed (of repeatedly asking my Lord to reduce the number of daily prayers.) I accept and resign to His Will." Overall, the Night Journey raised a good deal of stir among people, and the skeptical audience employ Prophet Muhammad with all sorts of questions.