The Lemon Wond Holt House belonged to Lemon Wond Holt, nicknamed “Rusty” (1904 -1999), a Hawaiian Hall of Fame Athlete and avid surfer; he was one of the last surviving local-born members of the Waikiki Beach “Stonewall Gang." His family left an indelible mark on the islands, including enjoying a relationship with Queen Liliuokalani. As well, the home is significant for its architecture, as one of the first examples of the "modestly detailed, whimsical cottages that dotted the islands during the 1920s and 1930s during the height of a population, economic and building boom that drew architects to the island. 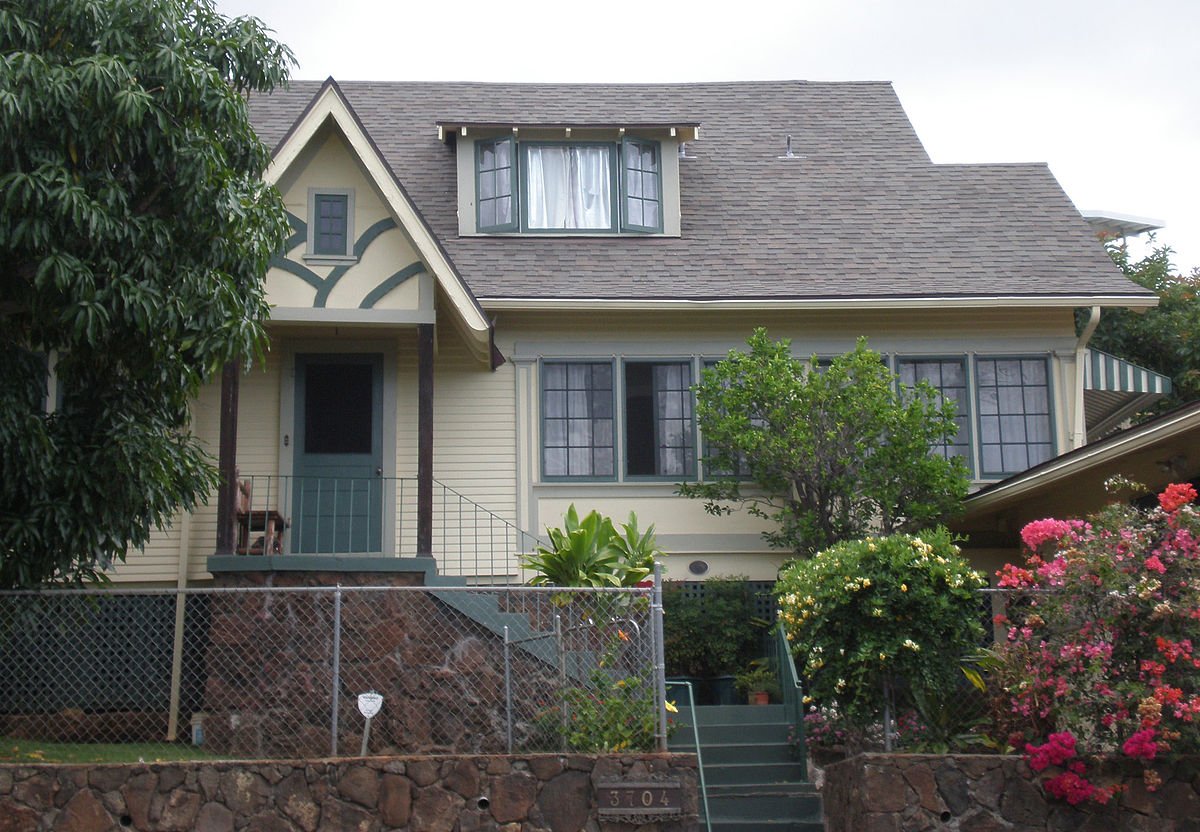 The Lemon Wond Holt residence (built during the 1920s) is an excellent example of a modestly decorated, picturesque fantasy style residence constructed in Hawaii in the period of the late 1920s and early 1930s. The house also stands as a monument to the Holt family, who left a lasting impression on Honolulu (and vicinity) including developing a relationship with Queen Liliuokalani.
Some historians argue the whimsical designs found in 1920s and 1930s Hawaiian cottages spoke to a playfulness tied to a culture seeking to reclaim an innocence felt lost during World War I. However, from a more practical perspective, the emergence of cottages in Hawaii coincided with a population, building and an economic boom which drew creative architects to the Hawaiian islands. The growing economic success tied to the pineapple and sugar industries led to a population boom. Indeed, Hawaii saw a 22% increase from 1910 to 1925 with Oahu's populace rising more than 50% during that same period. As such, increasing numbers of architects arrived, and the cottages came soon after that. Thus, by the 1920s, Hawaiian architects cultivated a style unique to the islands, no longer reliant upon the U.S. mainland for inspiration.
The Lemon Wood Hold Residence, as was the case in many similar houses, found inspiration from the Tudor Style, but also with Elizabethan or French forms, as well as considerations made to accommodate the Hawaiian climate.  The Lemon Wood home enjoyed several Elizabethan (and playful) forms, such as the whimsical, skewed gable entry treatment, flared eaves, and dormers. Meanwhile, the spacious, wrap around, enclosed lanai and noticeably open interior were common in Hawaiian cottages before the invention of air conditioning.
Lemon "Rusty" Wond Holt (1904-1999), son of Edward Stretz Holt and Augusta Helen Lemon, was born in Waikiki at his maternal grandmother's home across from Kuhio Beach. His grandmother, Mary Ann Wond Lemon, was a classmate of the future queen, Liliuokalani, at the Royal School and the two remained close friends throughout their lives. As a child, Lemon Holt spent much time at his grandmother's home and could often be seen gathering coconuts, limu, and reef fish for the Queen when she visited. In appreciation, the Queen gave the young boy a koa bed, which remained in the house until 2003.
Both sides of Rusty's lineage were longtime, Hapa-Haole families (persons of mixed Caucasian (Haole) & Hawaiian (Hapa) ancestry, noted for demonstrating a lifestyle tied to both Western and Hawaiian influences).  Both families left indelible marks around Waikiki and Oahu in the late nineteenth and into the twentieth centuries. The street, Lemon Place, exists as a reminder of the family's influence.
Rusty made a name for himself as an athlete; he was inducted into the Hawaii Sports Hall of Fame in 1979. He played American football at both Kamehameha School and the University of Hawaii. As a halfback, he proved to be an integral member of Otto Klum's champion football teams at the University of Hawaii in 1927,1928 and 1929. He was also an avid surfer and a member of the "Stonewall Gang," who dominated the Waikiki beach scene in the early years of the twentieth century (and he continued to surf into his mid-70s.)
Upon graduation from the University of Hawaii in 1929, Lemon Holt married Gladys Ah Lin Tarn of Maui, the daughter of grocer Tarn Ah Fook. Throughout his lifetime Lemon Holt worked in a variety of fields, working as a foreman for Hawaiian Pineapple, a postmaster in Kahului Maui during the 1940s, and the manager of Kamehameha School's bookstore during the 1960s and 1970s. He died in 1999. The property remained in the hands of the Holt family until 2003, when the present owners purchased it.