The hurricane of 1928 that devastated this section of Florida was one of the worst natural disasters in American history. The storm caused the death of two to three thousand people, the majority of whom were African American agricultural workers. Records indicate that 674 African Americans were placed in a mass grave at this site along the edge of the city's pauper cemetery. These victims were among the estimated two to three thousand Floridians who died as water flooded coastal communities and those adjacent to Lake Okeechobee and other inland bodies of water throughout southern and central Florida. The devastation was made worse by the failure to alert residents despite the devastation that killed over fifteen hundred residents in the Bahamas and U.S. territories in the Caribbean in the days leading up to the storm's landfall in Florida. The brunt of the storm hit agricultural communities on the south side of Lake Okeechobee from Clewiston to Canal Point. The health department ordered residents along the lake to burn the bodies of victims to prevent a potential health hazard. In other places, bodies of deceased agricultural workers were piled on trucks and hauled to West Palm Beach and placed in a mass grave at Tamarind Avenue and 25th Street. That grave remained unmarked for 75 years until Robert Hazard and the non-profit Storm of ’28 Memorial Park Coalition fought for nearly ten years to create a memorial and fence around the mass grave. In 2003, the city placed a state historical marker at this location. 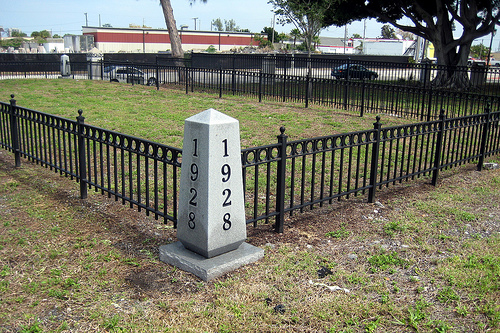 Caskets for the victims of the hurricane 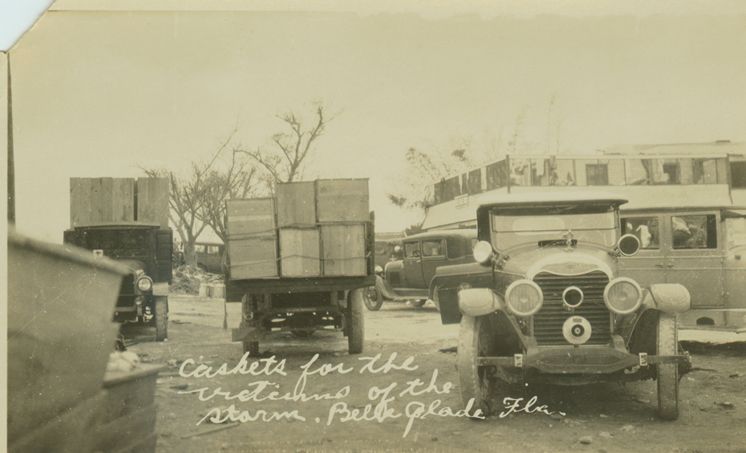 This historical marker was added for the 75-year anniversary of the hurricane. 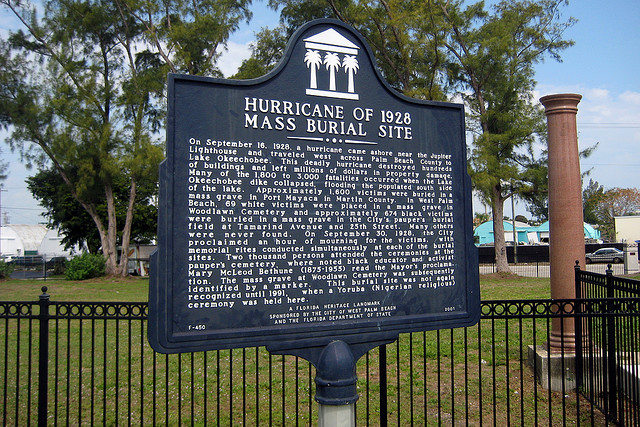 Volunteers recover bodies of victims from one of Florida's many lakes. 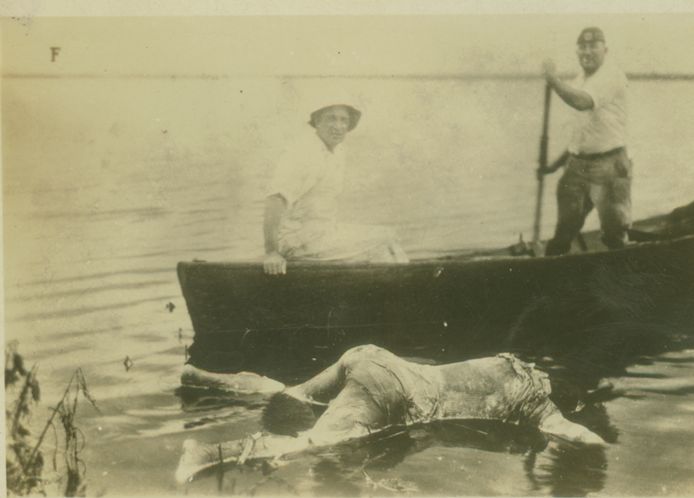 Although the surviving victims of the storm are in their 80's and 90's now, the memory of the devastation comes back as they recall the Hurricane of 1928. Records indicate that 674 African American victims of the hurricane were placed in this mass grave at Tamarind Avenue and 25th Street.

The deadly hurricane of 1928 not only killed thousands but also destroyed hundreds of buildings and left an estimated 16 billion dollars in property damage using today's dollars as the benchmark. The damage and death toll in Florida's interior was greater than the coast owing to the failure of a five-foot dike built around Lake Okeechobee that collapsed during the storm. The section of the dike that failed was replaced with a forty foot tall barrier in subsequent years. Historians have shown that the failure to prepare the area around the lake caused many of the deaths. Blame is also attributed to the failure to organize an evacuation after the storm caused damage throughout the Caribbean. At the same time, the death toll would have been much higher had it not been for the last-minute efforts of residents who helped evacuate neighbors and rescue potential victims.

Some victims were buried in mass graves in Port Mayaca in Martin County, and in West Palm Beach, 69 white victims were placed in a mass grave in Woodland Cemetery. Hundreds of volunteers helped recover bodies, create pine boxes for caskets, and dig graves throughout the area. Many victims were never found or buried in private cemeteries. In the area directly south of the Lake, the health department ordered volunteers to burn some of the bodies that washed ashore in the days and weeks after the disaster in hopes of preventing the spread of disease. By that time, most of the bodies recovered from the lake were unrecognizable and rotting in the heat.

Survivor Frank Stallings was among the volunteers despite losing his home and business. He recalled being ordered by the health department to create a fire and burn the bodies that had already begun to decompose. The experience caused trauma that he and other volunteers never forgot. For Stallings, the moment that haunted him was seeing a bracelet on the wrist of a toddler. He remembered the girl showing him the bracelet two months before the storm. The memory of her showing off the birthday present hit him as he added her body to the pile.

The tragic storm was the second deadliest hurricane in American history next to the one that devasted Galveston in 1900. Some victims recall that day and speak of the screams they heard and the bodies floating around the city. Most victims had rotted to the point that a funeral was not possible. The Hurricane of 1928 was sometimes referred to as the "Forgotten Storm," as city leaders tried to hide the devastation for fear of hurting the tourism industry.

The mass grave here was dug approximately 20 feet deep, and an estimated 674 pine boxes containing the remains of African American families were placed in the hole. Despite the apparent precision of the record, it is not known exactly how many people were buried here. The precise location of the grave was unknown until the Bureau of Preservation funded a project to discover the site based on historical records, the use of scientific equipment, and a small amount of excavation.