This historical marker commemorates the life of Henry Engle, the author of the chorus and music for "The West Virginia Hills." Engle's creation is one of four official state songs and the historical marker is just slightly west of the farm where Engle was born. Like his father, Engle worked as a farmer but today he is best known for his contribution of this song. Written in 1885, the song became more widespread following its inclusion in a songbook in 1913. Multiple versions of the song could be heard during the first half of the 20th century. Shortly after the publication of what became the "definitive" version of the song in 1961 by West Virginia Wesleyan College musician C. Buell Agey, the state legislature approved a resolution making this one of the official songs of the state. 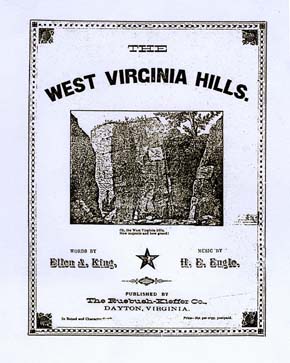 Henry Everett Engle was born in 1849 to William and Tahitta Engle. Engle's grandparents were Methodist immigrants from England. Engle studied at Ohio Wesleyan University in the mid-1880s. The Engles lived and worked together on the family farm in Barbour County for the majority of his life. He eventually married Julia Llyod of Braxton county, where he would eventually move, establishing his own farm.
Though Engle was primarily a farmer, he is best known for his work as a musician and songwriter.  The most famous of Engle's work is "The West Virginia Hills" which eventually became one of West Virginia's state songs. The song was written based on Rev. David King's poem of the same name. For the song, Engle composed the music and wrote the lyrics for the chorus. The song was written in 1885 and Engle secured a copyright for his music a year later. The song was included in The West Virginia Singer in 1913. From 1960 to 1961, some edits to the song and music were completed by C. Buell Agey of West Virginia Wesleyan College in an attempt to create a definitive version. This final version of the song was officially adopted as one of the state's songs following the passage of a 1961 resolution. Engle also wrote "Take the World for Christ" and "My Country Home."
Engle died of apoplexy at his home in Braxton WV in 1933 and was buried in a small cemetery on the family's property.

Catalogue of the Officers and Students for the Academic Year. Delaware, Ohio. Ohio Wesleyan University, 1886.