The Saltville Battlefields Historic District is a roughly 4.4 sq. mile area in the northwestern section of the Town of Saltville where two Civil War battles occurred in 1864. The saltworks in Saltville became a vital resource to the Confederate Army for food preservation, which ultimately made the town a target for Union attack. The First Battle of Saltville happened on October 2 and resulted in a Confederate victory. However, this battle is more well-known as the Saltville Massacre, as Confederate guerilla soldiers under Champ Ferguson and other local volunteer forces murdered both Black and white Union soldiers left injured on the battlefield and in nearby hospitals. Ferguson would later hang for his war crimes. The Second Battle of Saltville occurred on December 20-21 and ended with a Union victory and the temporary destruction of the saltworks. The Saltville Battlefields Historic District was designated a Virginia Landmark on December 17, 2009 and it was added to the National Register of Historic Places on March 25, 2010.

Map of the First Battle of Saltville 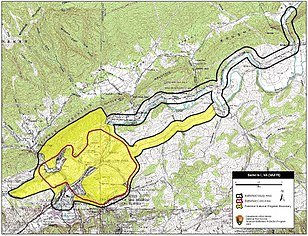 Modern view of the Saltville Battlefield 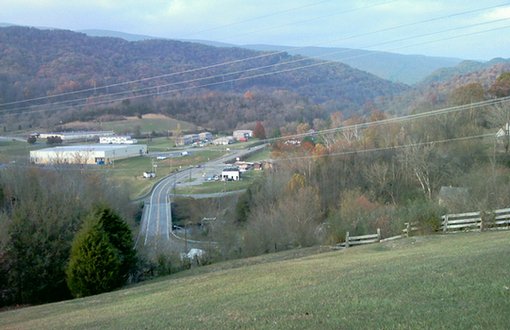 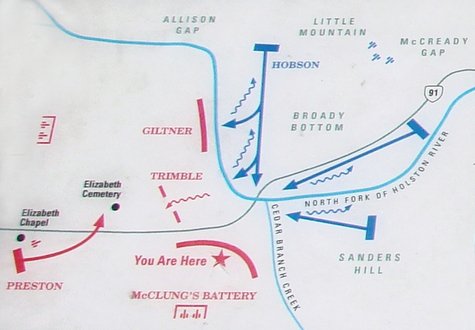 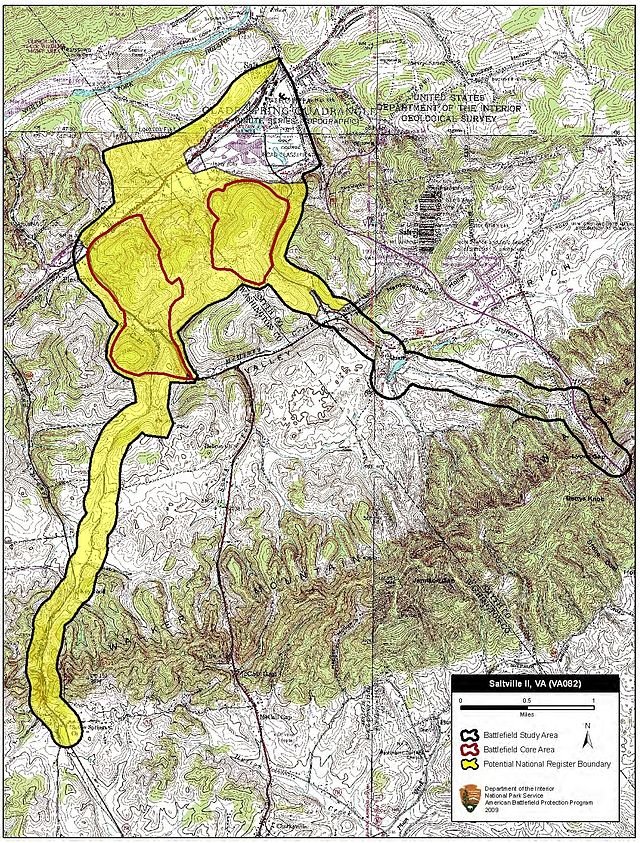 Historic photo from the Saltville Battlefield 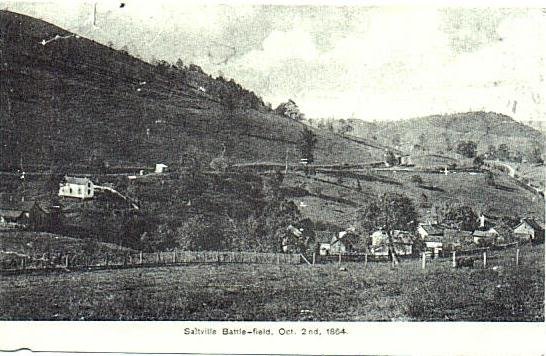 The sleepy little town of Saltville is now but a shadow of its former self. Named for the abundant salt deposits found within the valley where Saltville is located, the town was once a prosperous settlement supported by the salt manufacturing industry – because prior to modern refrigeration and food preservation, salt was the primary means of preserving food. Throughout the 18th- and 19th-centuries, Saltville provided the salt for a large portion of the south Atlantic region. This reason made Saltville a Union target during the Civil War as the Confederate Army relied on the town to produce its salt rations.

The Civil War raged on for three years before Union troops managed to make a serious assault on Saltville. However, on October 2, 1864 a Union force of more than 5,000 troops under command of General Stephen Burbridge met a significantly smaller Confederate force of 300 home guard troops headed by Brigadier General Alfred “Mudwall” Jackson. Confederate forces were driven back by the large Union onslaught, but Confederate cavalry reinforcements of 2,500 under Colonel Henry L. Giltner arrived in time to bolster the home guard’s efforts. In the end, Burbridge abandoned his attack and retreated, giving the Confederate forces a welcomed victory. However, the events that occurred after the battle marred any future glory the Confederates might have gained.

On October 7, 1864 an unknown number of Confederates stormed the hospital at nearby Emory & Henry College and murdered 5-7 members of the 5th Colored U.S. Cavalry and a white lieutenant, Elza C. Smith. It is estimated that another 40-43 members of the Black regiment were slaughtered on the battlefield on October 2. The Confederate guerilla Champ Ferguson was unfortunately present at this battle and is reportedly responsible for the battlefield murders. Ferguson would later hang for his war crimes after the war. The atrocity at Saltville became known as the Saltville Massacre and one of the war’s worst crimes.

General Burbridge attacked Saltville as an attempt to improve his failing reputation as an Army commander. His failure to obtain a victory resulted in his removal from command. In his place, Brigadier General George Stoneman was placed in charge. Stoneman, determined to destroy the saltworks, orchestrated another raid on Saltville two months later. This time, the Union forces under Stoneman were successful in defeating the Confederate forces around Saltville and destroying the saltworks, albeit only temporarily. The destruction of the saltworks was a short-lived victory for the Union troops as the war officially ended only four months later on April 9, 1865.

During the war, earthen fortifications were erected on the high ground around Saltville and the saltworks. These rudimentary fortifications were given names such as Fort Breckenridge, Fort Statham, Fort Hatton, and the Walnut Street Forts. Many other infantry ditches were cut into these hillsides, as well. The majority of these earthworks still exist today, though the most are now located on private property. Historians and archeologists alike consider these earthworks just as valuable as the Saltville battlefields due to the high level of preservation, and their structural integrity remains some of the best of fortifications from the Eastern Theatre of the Civil War.

Throughout the rest of the 19th- and 20th-centuries, the battlefields experienced some physical changes as the industries of Saltville changed, such as the creation of a fairgrounds and private residences. Then on December 17, 2009 the Saltville Battlefields Historic District was designated a Virginia Landmark and the historic district was added to the National Register of Historic Places on March 25, 2010.