On February 12, 1869, the steamboat Mittie Stephens caught fire and sank near this location leading in the loss of sixty-one passengers. The vessel was probably named for the daughter of the owner who was born around the same time as construction of the steamship, which made her maiden voyage in 1863. The vessel was soon seized by the Union for use as naval transport for troops and equipment during the Civil War. After her service in the war, the Mittie Stephens serviced trade between ports in New Orleans, Louisiana, and Jefferson, Texas. The vessel became one of the leading ships along this route until the disaster that led to her end. While the wreckage of the vessel has not yet been discovered, the Army Corps of Engineers working with researchers from Texas A&M University have searched for the remains of the vessel and some items that date back to the 1860s and may have been aboard the Mittie Stephens have been recovered. To date, there is no historical marker commemorating the 1869 disaster.

While there are no known photos or drawings of the Mittie Stephens, this sheet music for a song honoring those lost in the disaster bears a representative image of the lost vessel. 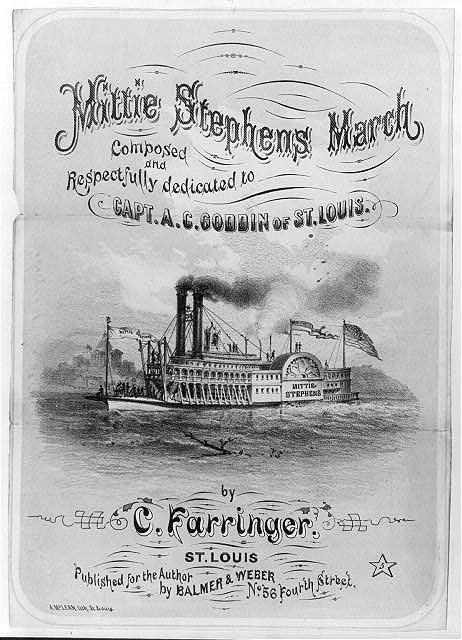 The Mittie Stephens was a sidewheel paddle steamer built in 1863.  Like virtually all boats of her day, she was made of wood and had a wide, flat hull to support the decks above.  She had three decks, with the top (third) deck reserved for the crew and VIPs; the second deck housed the most expensive rooms for passengers, and the lowest deck had the cheapest tickets because the rooms shared space with cargo.

The steamboat began her service as a passenger/cargo vessel in 1866 after being purchased by civilian owners following the end of the Civil War.  Her main route was between New Orleans, Louisiana and Jefferson, Texas, which was the head of navigation in the Caddo Lake area because of the Great Raft obstruction of the Red River.  She became a regular of the route in her few years of service, following the Red River from Caddo Lake diagonally across Louisiana until it met the Atchafalaya (Choctaw word for “long river”) River near Simmesport. From there it flowed virtually parallel with the Mississippi down to the Gulf of Mexico.

On the morning of February 5, 1869, the Mittie Stephens was loaded with just over 100 passengers and an assortment of cargo, including gun powder, gold and paper money for the payroll of the U.S. Army at Jefferson, corn, and over 200 hay bales. The majority of the voyage up the Red River was uneventful until her last stop in Shreveport, Louisiana.

The Mittie Stephens departed from Shreveport around 4 p.m. February 11. Several hours after departure when the vessel was well into the channel that ran the length of Caddo Lake off its southern shore, a crewman smelled smoke and saw that a bale of hay had caught fire, presumably ignited by sparks from a lantern on the bow meant for illumination that were blown into the hay. After several unsuccessful attempts to quell the flames, including throwing water buckets, spraying with a hose, and trying to push the burning bales overboard, a panic swept through the ship as people started fleeing for their lives.

Upon knowledge that his vessel was ablaze and it couldn’t be stopped, the captain turned the Mittie Stephens toward shore in an effort to save as many lives as possible.  In the middle of the river, they were several hundred yards from land, but he thought he could get there before the ship was a total loss.  Unfortunately, the ship ran aground a few hundred feet from shore and could not get past it because of the shallow water that was blocking the front of the boat. Despite being grounded, the captain kept the wheels turning, hoping that he could push past the shallows and get all the way to shore. This potentially caused more harm than good, because at this point the entire rear of the ship was ablaze and passengers were jumping overboard and subsequently being sucked into the paddles as they tried to escape, as the water at the rear of the ship was over 10 feet deep.

Several miles downstream, the Captain of the Dixie was informed of the distress of the Mittie Stephens and immediately dispatched his crew and vessel to offer aid. The Dixie was able to reach the site of the catastrophe and pull people aboard and assist them to shore.

61 people perished in the Mittie Stephens accident that fateful night. Some are thought to have drowned in the chilly waters, and others thought to have been mortally wounded when sucked into the paddle wheels of the steamer. Despite all the chaos, some crew members were able to offload the gunpowder from the cargo deck before the flames could reach them, potentially saving the other 42 souls that managed to escape. The ship itself burned all the way down to the water line, leaving only the boilers, bell, safe, and machinery behind, which were quickly salvaged.

Multiple attempts have been made to locate the exact site of the Mittie Stephens, with the most extensive occurring in the early 1980s. In 1993 an amazing discovery was made that might include items from the doomed vessel. Led by a former member of the Corps of Engineers, a team from Texas A&M University found broken china, crockery, glass, among a multitude of other artifacts that were confirmed to mid-1800s vintage and showed definite signs of fire damage. Despite this electrifying find, actual wreckage of the Mittie Stephens still has yet to be found, if it ever will be. The artifacts that were recovered can be seen at the River Museum in Jefferson, and the bell is displayed at the Jefferson Historical Museum.