Dedicated in 2010, this historical marker replaces a previous marker that was created in 1937 and titled "Indian Massacre." The marker shares the story of an attack by indigenous people against settlers of European descent. From the perspectives of settlers, these attacks were acts of terror against peaceful civilian families. From the perspective of many Native peoples, however, these acts of violence were part of a strategy of defending their land and tribal sovereignty against invasion. The frontier was contested space, and the killing of Nicholas Wood and Jacob Straight at this location in 1786 also included the capture of Elizabeth Dragoo. Jacob Straight's wife, who is not named by the marker, was able to escape capture.

This historical marker mirrors the text of the 1937 marker it replaced with the exception of the title. 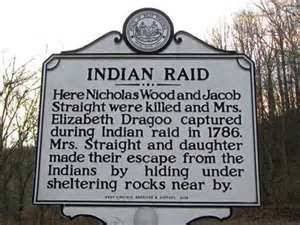 Indian resistance to the settler’s occupation of the Ohio Valley in the late 18th century, along with acts by settlers of European descent, was sometimes violent. While major battles such as the French and Indian War and Pontiac’s Rebellion dominate the historical narrative, the periods before and after these wars were tense and Native people and settlers on the frontier had to be prepared for a constant state of warfare.

While gathering crops on October 1776, the Straight family noticed that the livestock was making a lot of noise which provided a warning that Native people might be in the area and preparing for an attack. As the settlers were preparing to go to the fort, they realized Mrs. Dragoo and her son had not returned to the house. the Straights feared that they had been captured and Jacob Strait and Nicholas Wood went to see if they could find them.

Meanwhile, Mrs. Strait and her children had already left to go to the fort.Jacob Strait and Nicholas Wood did not get far until the Indians had shot Mr. Wood and even though he was unarmed and surrendered. One of the Native Americans reportedly struck Straight in the head and scalped him. Mrs. Strait was able to hide herself and her daughter under some rocks and once the Indians left the area she came out of her hiding place and waded the river to Prickett's Fort.

The next morning, the settlers found the Indians had taken everything from the house prior to setting a fire that was intended to destroy the homestead. However, the attackers seem to have faltered in this goal or simply changed their mind as there was only a hole burnt through the floor.

Mrs. Dragoo sent her son ahead so that he was not slowed by her pace, which was hampered by a state of illness. Later it was discovered that she had also been killed and her body was scalped. The Indians adopted the orphaned boy and he later married a member of the tribe and had four children, two boys and two girls. After the boys were older, he took them hunting one day and never went back to the tribe. He returned to Virginia, leaving the two girls with their mother.