This cemetery opened in 1952 and was selected as a nearby location for the burial of area veterans, including those being cared for at the Veterans Administration Domiciliary in nearby White City. Eagle Point is part of the National Cemetery System. 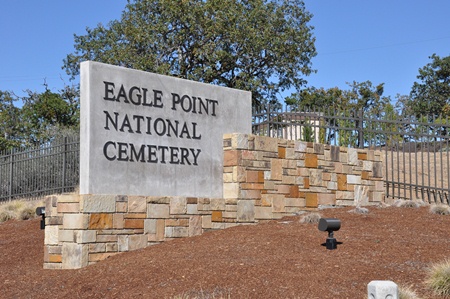 Among the notable veterans buried at this cemetery is U.S. Marine Corps Women's Reserve member Charlene Prye. Pyre was a member of the Dick Jurgens Orchestra and entertained the troops and also was a well-known performer on the radio. The daughter of Maurice Pryer, a minor league player, she was also part of the All-American Girls Professional Baseball League. Her grave is located in section A1.

Another notable person buried here is Lieutenant George R. Tweed of the U.S. Navy. Tweed was the sole survivor of a group that was captured during the occupation of Guam during World War II. He miraculously hid on his island for more than two years yearing avoiding capture by the Japanese.